In the last 19 weeks, dating back to mid-April, eight of the nine stocks I have selected for DTA’s Income Builder Portfolio have been companies that already had been part of the IBP.

The one new position initiated during that span was UnitedHealth Group (UNH) … and now we have doubled-up on that, too. 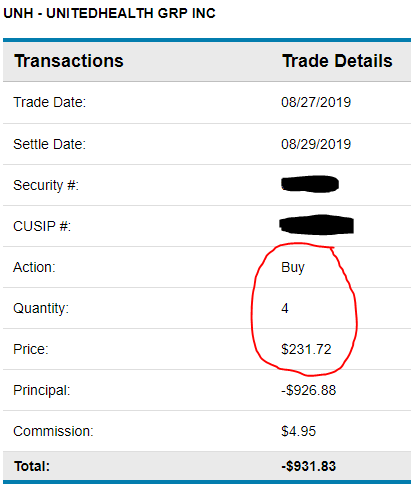 Since this endeavor began on Jan. 16, 2018, we have made 40 buys; 14 of those have been companies the IBP already had owned at the time of purchase.

(Technically, we have made 41 buys, but we sold Medtronic (MDT) shortly after acquiring it, and immediately used the proceeds to add to our Home Depot position.)

Why So Many Double-Ups?

So why do I keep choosing companies already in the portfolio? Why don’t I usher in more newcomers when I make my twice-monthly selections?

After all, one of the ideas behind the IBP is to give fellow investors names to consider for further research. Why don’t I add more names?

Well, the folks at Daily Trade Alert want me to construct the kind of portfolio I would be proud to build for a friend. So I am trying to pick high-quality companies in a variety of sectors while also keeping an eye on valuation.

As I said in my previous article:

For this IBP buy, I also considered beaten-down industrials such as 3M (MMM) and Caterpillar (CAT), tech mainstays like Cisco (CSCO) and Broadcom (AVGO), and companies in defensive sectors (consumer staples, utilities) that have been bid up by investors seeking relative safety.

In the end, I felt UNH provided the best combination of quality, value and dividend growth.

I already had thoroughly vetted UnitedHealth. I already knew it was an outstanding company, and here it was available again at a reasonable price. There were similar reasons for my other double-ups.

We expect our real-money IBP project to go on for years and years. Plenty of new stocks will be chosen, but I also will be trying to build up sizable stakes in many companies.

Aggressive dividend growth is one of UnitedHealth’s most attractive qualities, and it helps compensate for a relatively low 1.9% yield. 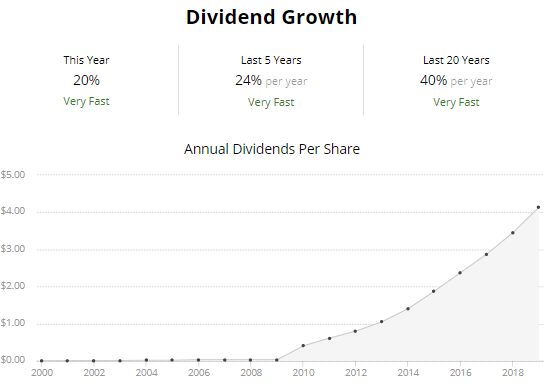 Because we made our latest purchase before the ex-dividend date (Sept. 13), the Income Builder Portfolio will receive the quarterly $1.08 dividend for our entire 8.0176-share position on Sept. 24.

That $8.66 payout will be reinvested right back into UnitedHealth Group stock — as mandated by the Business Plan — and will buy about .04 of a share more.

And so on and so on, not only with UnitedHealth but with every company in the IBP … and that’s why we gave this endeavor the name we did.

Value Line’s analysts believe UnitedHealth’s share price has the potential to appreciate about 40% over the next 18 months (blue circled area in graphic below) and as much as 65% over the next 3-5 years (red circle).

Given those projections, it’s not surprising that Value Line includes UNH in its model portfolio of “Stocks With Long-Term Price Growth Potential.”

Value Line also names UNH as one of its 100 “Highest Growth Stocks.” To make that list, “a company’s annual growth of sales, cash flow, earnings, dividends and book value must together have averaged 10% or more over the past 10 years and be expected to average at least 10% in the coming 3-5 years.”

Notably, UNH is one of only nine companies on the Highest Growth list to have earned Value Line’s top “safety” rating of 1; the IBP also owns two of the others, Starbucks (SBUX) and TJX Companies (TJX).

Morningstar Investment Research Center says shares of this wide-moat, well-run company are more than 25% undervalued, hence the 4-star rating. I like the forward P/E ratio down near 15 and the appealing 1.2 PEG ratio (which accounts for expected growth). 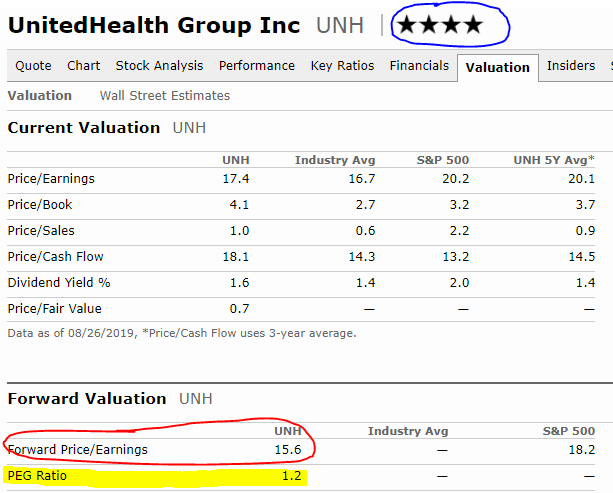 ValuEngine also calculates a fair-value price for UNH in excess of $300 per share.

We can get a lot of useful valuation information from the FAST Graphs illustration below.

The red-circled areas show that UnitedHealth’s “blended P/E ratio” (a FAST Graphs metric that blends the trailing and forward P/E ratios) is about 16, very close to the company’s norm this decade.

We also can see that UNH has suffered pullbacks mostly when its valuation has gotten too rich. When the ratios were in the 22-23 range, as my purple notations show, the price dropped. But when it was 17 and under, as in 2014 and earlier, performance excelled. 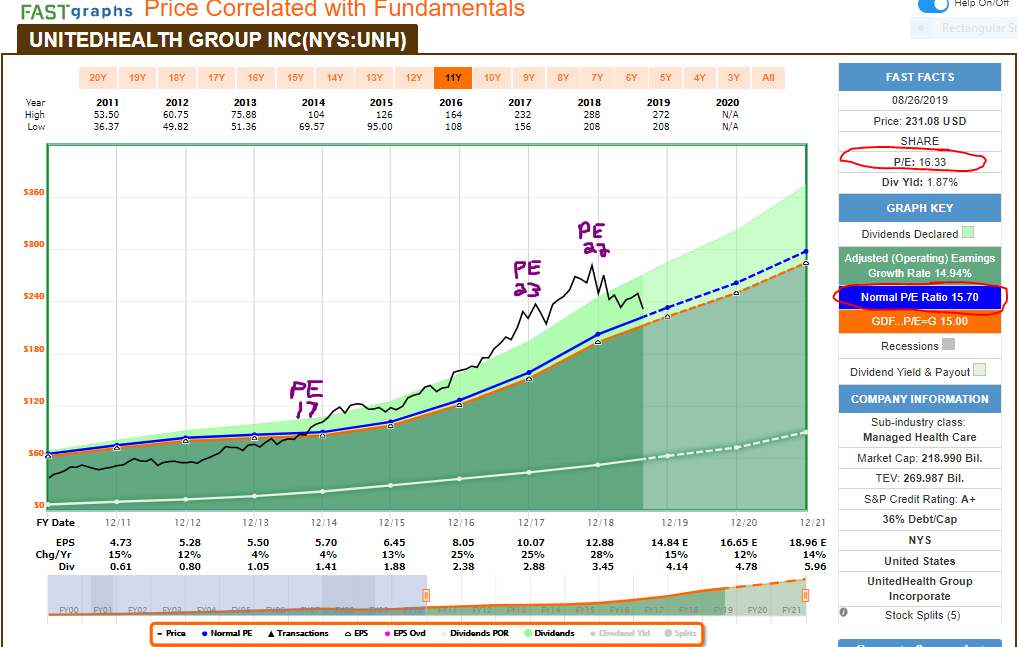 Tuesday was another volatile day on Wall Street, with stocks starting higher and then moving lower. UnitedHealth Group got caught in the downward draft, and it closed at $222.93.

The metrics suggest UNH already had been attractively valued at $232, so it certainly appears to be worth serious consideration at a price nearly 4% lower.

Who knows? If the company is a bargain when I make my September IBP selections, and if its fundamentals remain as strong as they are now, UNH could be our first three-time buy!

As always, it is up to each individual to conduct one’s own due diligence, to review one’s own goals and risk-tolerance level, and to invest accordingly.