Furious that the Federal Reserve is trying to act independently (as is required) rather than be the president’s political pawn, Donald Trump compared his own hand-picked Fed chairman, Jerome Powell, to Chinese dictator Jinping Xi — and, incredibly, accused “Powel” of being an enemy of the American people. 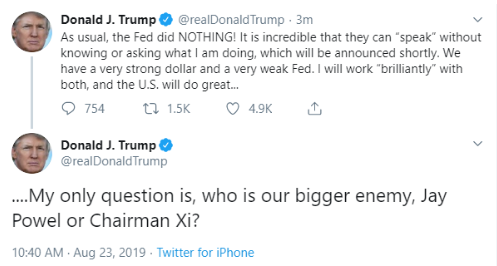 Then, upset that China would respond to his trade war by increasing tariffs on imports of soybeans, cars and other U.S. goods, Trump “ordered” American companies to stop making things in China. 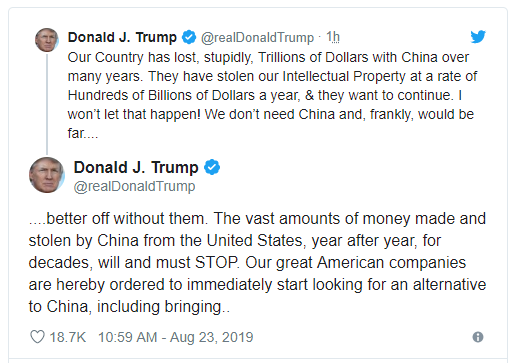 Hmmm, I wonder how businessman Trump would have responded had George W. Bush or Barack Obama “ordered” him to stop letting Chinese factories churn out Trump Ties, Trump Shirts and other Trump Crud.

Then, because he was on a roll, Trump delivered another “order” to three private companies before patting himself on the back for being so wonderful. 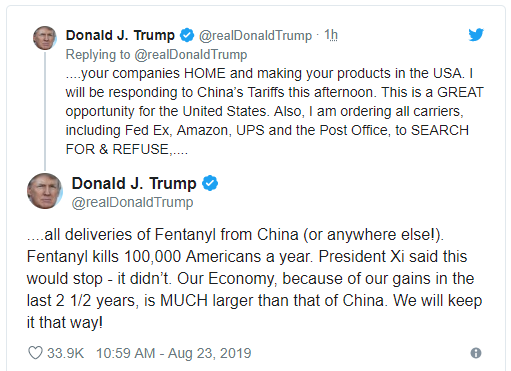 It was an amazing Twit Fit Meltdown, even by Trumpian standards. Predictably, the markets — which had been slightly positive after Powell’s reasonable and measured statement — melted down, too. 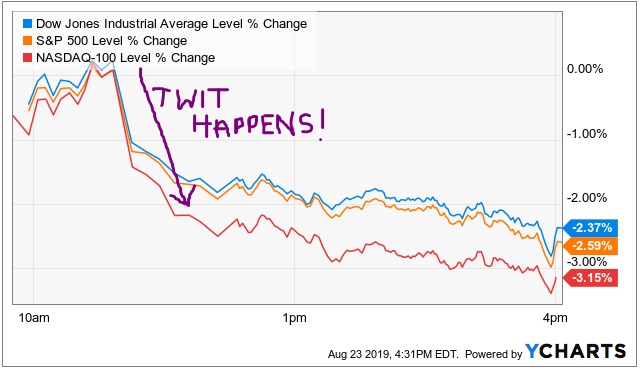 That was the backdrop as I sat down to make my next stock selection for DTA’s Income Builder Portfolio.

I ended up choosing the same company I went into the day expecting to buy: UnitedHealth Group (UNH).

Come Tuesday, August 27, I will execute a purchase order on Daily Trade Alert’s behalf for $1,000 worth of stock in America’s largest private health insurance provider.

It will be the second time in about 2 1/2 months that the IBP will have invested in UNH, as we initiated our position with a 4-share buy on June 11. 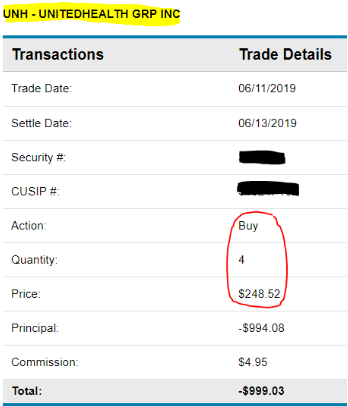 Even though it has dropped 7% since our initial buy, UnitedHealth certainly did not become a 7% worse company.

Indeed, the main piece of news since our first UNH purchase — the Q2 earnings report — suggests that the firm is an even more attractive investment now.

Both of the company’s divisions have continued to excel.

Despite almost all good news about the performance of UnitedHealth’s business, the stock price has underperformed during the last 12 months (first chart below) after many years of leaving Mr. Market in the dust (second chart). 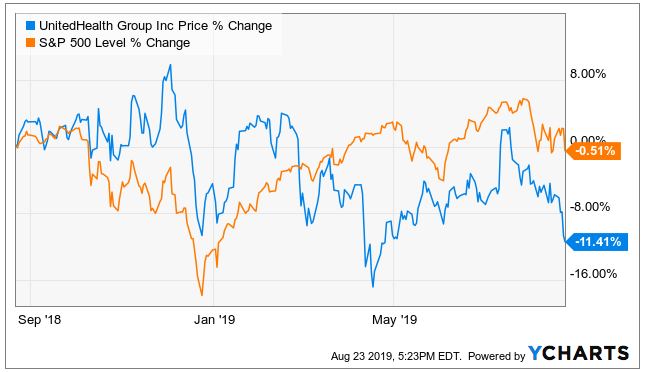 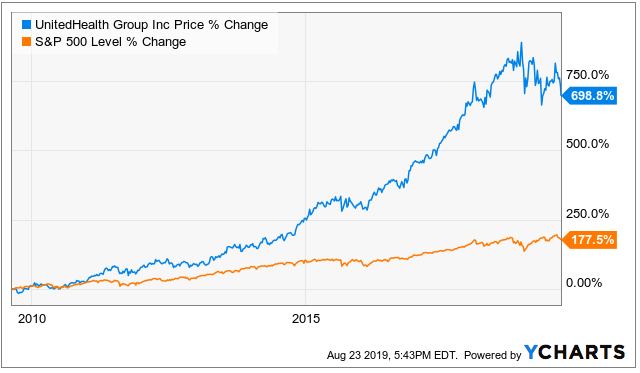 Just as politics slammed the market Friday, they have played a role in keeping UNH’s price from acting in concert with its performance as a business.

Politicians from both sides of the aisle know they never will be booed by voters for saying they plan to lower the cost of health care.

I have my doubts that there will be significant health-care reform regardless of which party controls the White House and Congress.

Even if some kind of change happens, however, the strongest companies will end up adjusting and thriving … and there are few, if any, stronger than UnitedHealth Group. 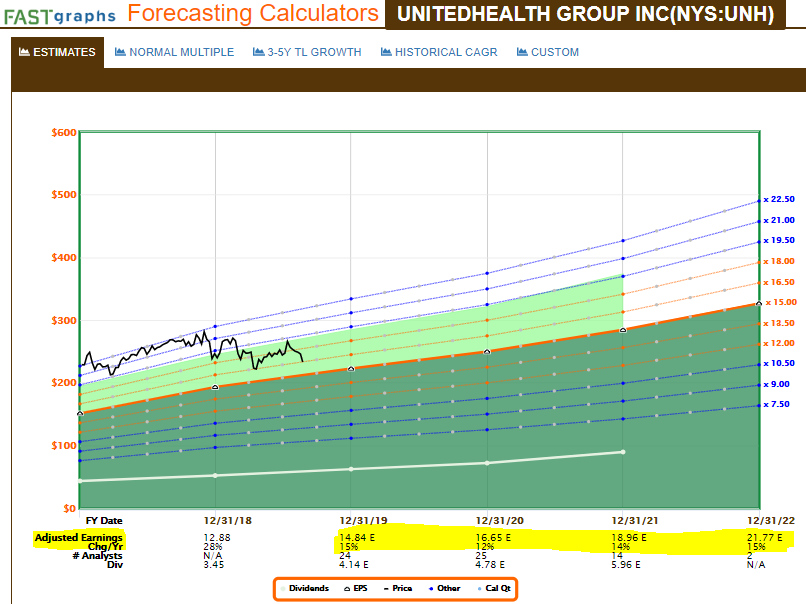 While prognostications are not guarantees, it’s worth noting that UNH has beaten or met estimates in every single quarter since the Great Recession ended.

For this IBP buy, I also considered beaten-down industrials such as 3M (MMM) and Caterpillar (CAT), tech mainstays like Cisco (CSCO) and Broadcom (AVGO), and companies in defensive sectors (consumer staples, utilities) that have been bid up by investors seeking relative safety.

In the end, I felt UNH provided the best combination of quality, value and dividend growth.

The company has few peers in that latter category, having boosted its payout more than 500% the last 8 years.

In June, our Board of Directors raised our shareholder dividend by 20% to an annual rate of $4.32 per share. The dividend has advanced at or above 20% each year since initiated about a decade ago, and at about a 30% payout ratio has grown to be more in line with the market level objective we set. Still our long-term earnings growth potential provides ample capacity to continue to advance the dividend at strong rates for years to come.

As Trump promised during his Friday morning twit fit, he again increased the tariffs on Chinese imports. This latest salvo came just days after he finally acknowledged that American consumers are paying for his trade war. 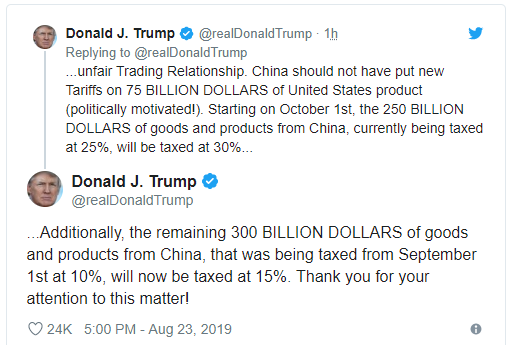 This time, he at least waited until the markets closed … although that could lead to a pretty messy Monday. We’ll see.

The temptation during tumultuous times like these is to not invest at all.

However, the Income Builder Portfolio will continue making two buys per month, just as our Business Plan mandates.

During both market advances and retreats, we will increase our share totals of high-quality dividend growers, and UnitedHealth Group definitely fits the bill.

Making gradual, regular purchases of outstanding companies has been a winning long-term strategy for decades … and I doubt the tweets of a desperate, angry politician will make it any less successful going forward.