From the time I decided late last week to increase the size of the Income Builder Portfolio’s Amgen (AMGN) position, to the time I hit the buy button on Tuesday morning, August 13, the share price of the pharmaceutical company had zoomed some 14% from $185 to $211. 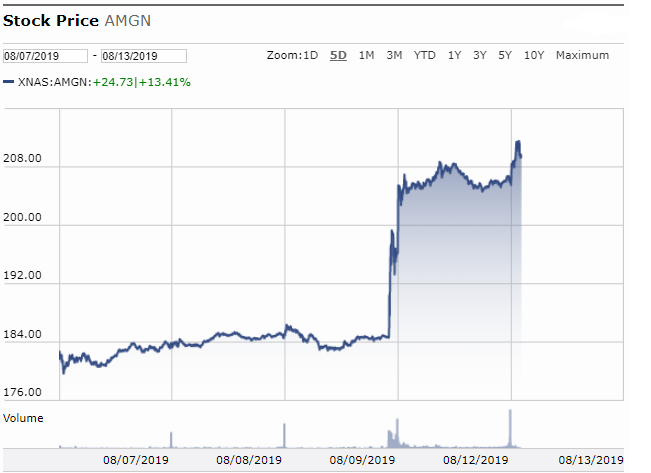 As mentioned in my previous article, Friday’s announcement of Amgen’s victory in a patent-related lawsuit led to the first 6% surge.

Momentum — and general bullishness on the company — carried the price up another 5% Monday to $205.78.

Overall market sentiment indicated a lower opening Tuesday, so I put in a $203 limit order before the bell.

The order just missed hitting … and then the price went up sharply along with the rest of the market, as the off-again-on-again trade talks between the United States and China appear to be on again.

Concerned the price would continue to skyrocket, I bought 5 shares of AMGN at $211.12 apiece in mid-morning.

Trading was so frenzied that my order filled in two batches, as the following image shows.

Naturally, shortly after the purchase closed, the price moved back down for no particular reason. It eventually went as low as $205 before closing at $206.12.

I’d be lying if I said the entire experience wasn’t a little frustrating, but this is the kind of thing that can happen when one commits to a certain investment on a certain day, as I do here with the IBP.

Thankfully, it has worked the other way with several of our purchases, with my bosses (and money men) at Daily Trade Alert getting “deals” because orders executed near session lows.

All of that stuff is short-term silliness, anyway; our portfolio is being built for the long haul.

The IBP now holds 10.2243 shares of Amgen — including the 5 we bought in the portfolio’s very first transaction back on Jan. 16, 2018, and .2243 of a share acquired via a half-dozen dividend reinvestments since then.

Having executed this latest buy the day before the August 14 ex-dividend date, the position will generate $14.83 in income to be received Sept. 6. That will buy approximately .07 of a share more AMGN.

Amgen now ranks seventh among the IBP’s 26 positions in annual projected income production ($59.30). Given the company’s outstanding history of dividend growth, I expect another significant raise next winter.

As indicated by the following survey, market-watchers think quite highly of Amgen. 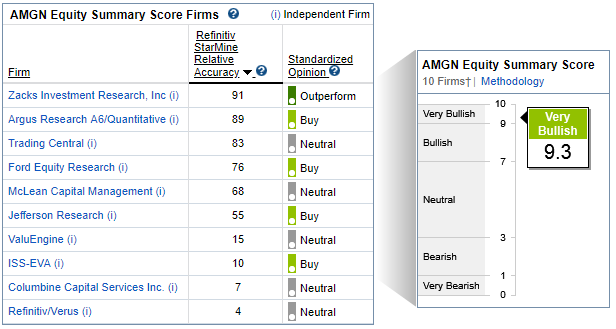 Argus just reaffirmed its $220 target price for the stock, while analysts at Ford Equity Research and Schwab expect AMGN to outperform the market during the next year.

In its latest report, Value Line included Amgen on a list of attractive, low-risk growth stocks. Its people expect appreciation up to 70% over the next few years, and they give AMGN top scores for Safety (1) and Financial Strength (A++).

Amgen’s fair value is $214, according to Morningstar Investment Research Center, which has included the company in its “Dividend Select Portfolio” for the following reasons:

Amgen has built a diverse stable of older products, new therapies, and pipeline candidates that should help offset top-line declines from the onslaught of biosimilar competition. With deep manufacturing capabilities, the firm should be a strong player in the biosimilar market as well. A strong balance sheet and low dividend payout relative to cash flow are also attractive.

The FAST Graphs evaluation tool indicates that AMGN is just about fairly valued. 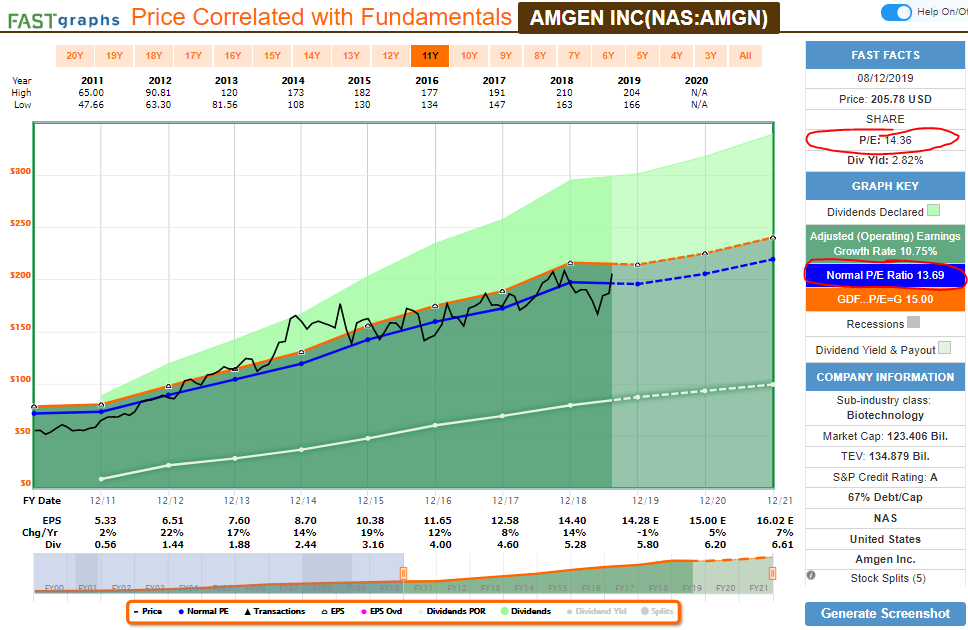 I’ll be honest: If someone had told me last Friday that Amgen’s price would go up 14% before we would buy it three sessions later, I might have selected a different stock this time for the Income Builder Portfolio.

But hey, Dividend Growth Investing is a long-term strategy, and the IBP’s primary mission is to build a reliable, ever-increasing income stream through ownership of high-quality companies. And it’s not as if Amgen was overvalued, anyway.

Many years — and many dozens of dividends — from now, I doubt we’ll be thinking about what we paid for this handful of Amgen shares.

This Stock is Offering a Massive Profit Opportunity (Again)

Aggressive Traders Could Double Their Money With This Trade

Why You Should Invest NOW

Upgrades and Downgrades for Wednesday, 4/21

This Growth Stock Belongs on Your Buy List Today