Enbridge Inc. is a Canadian energy transportation company, with operations spread throughout Canada as well as the eastern and midwest USA. The company transports and distributes oil, natural gas, and natural gas liquids over a wide swath of North America, connecting supply basins with key demand centers. It also operates a gas utility business.

At the end of 2018, Enbridge completed a structural transformation from being a master limited partnership to becoming a corporation. In the process, Enbridge became more streamlined, and all of its core pipeline assets were rolled up into a single publicly-traded entity. In its recent earnings report, the CEO said:

Strategically, the actions we took over the past year to streamline, strengthen the balance sheet and move to a pure pipeline and utility model, have further de-risked the business and put us in a position of strength to capitalize on opportunities going forward. 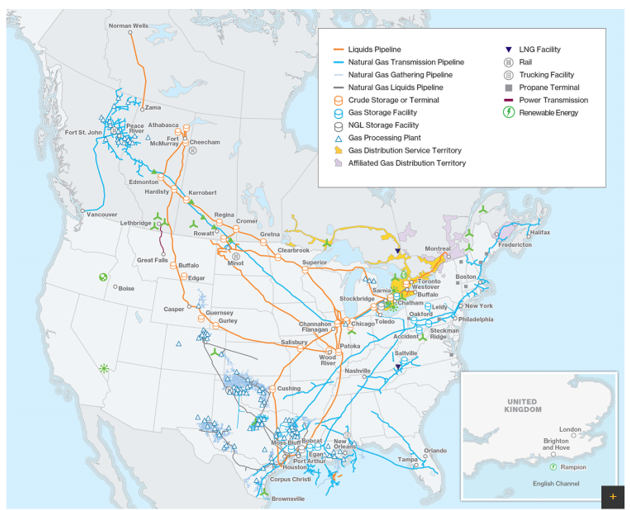 Enbridge operates the world’s longest and most complex crude oil and liquids transportation system. Its natural gas pipelines transport about 20% of all natural gas consumed in the USA. And its gas utility business delivers energy to about 3.7 million homes and businesses in Ontario, including the Toronto and Ottawa metropolitan areas.

The following slide depicts Enbridge’s three core businesses and their contribution to the whole company. 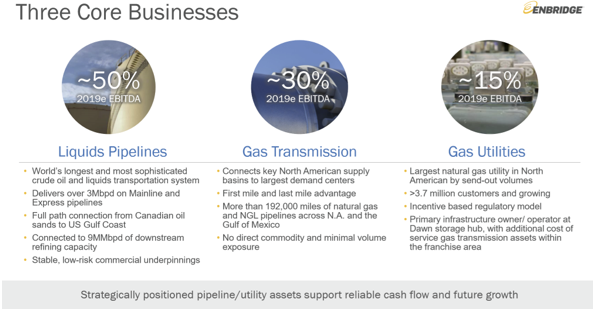 Here is Enbridge’s Quality Snapshot. I derive this from the following sources, which I have come to trust and respect over the years:

As you can see, Enbridge stacks up as a good-quality company.

While Value Line gives Enbridge a mid-level safety rating, I would note that its stock has a 5-year beta of just 0.59, meaning that its share price has been much less volatile than the S&P 500. During the Great Recession, Enbridge’s stock price fell 23% compared to the S&P 500’s drop of 55%.

Enbridge’s BBB+ credit rating is typical in the pipeline industry. BBB+ is considered an investment-grade rating from S&P.

Ratings from the other credit companies are in line with S&P’s rating.

Morningstar’s wide-moat rating is based on the inherent moat-worthiness of pipeline networks, Enbridge’s massive scale, and the integrated (rather than scattered) nature of its pipeline networks.

In its favor are a manageable payout ratio (compared to cashflow); moderate debt; and its long streak of increasing dividends (23 years).

Enbridge has a high yield at 6.7%. The following graphic from Simply Safe Dividends sums up its growth record. “Last year” on the graph refers to 2018. Earlier this year, Enbridge increased its dividend by 7.1%. 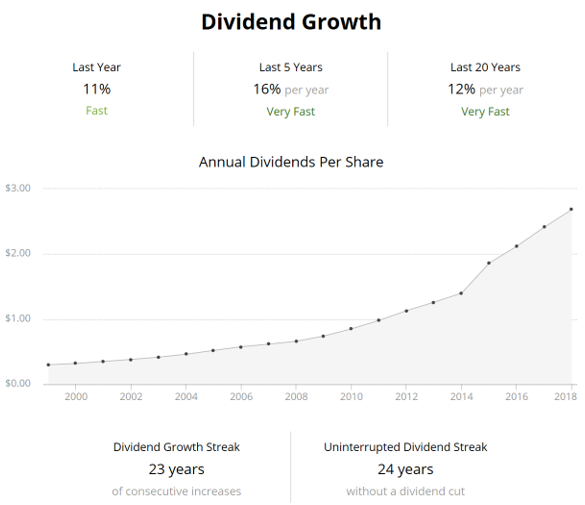 Everything considered, I would label Enbridge a high-yield, fast-growth dividend growth stock. 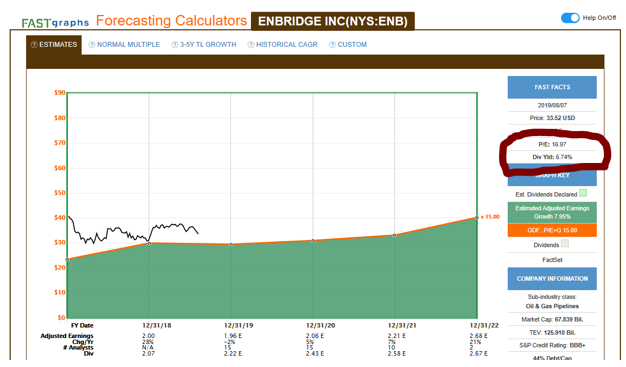 The orange line represents a reference line for fair price, computed at a P/E ratio of 15. Because the P/E ratio is held constant, variations in the orange line are proportional to ENB’s changing earnings. The black line is ENB’s actual price.

Since the black line is above the orange line, this first method of estimating valuatuion suggests that ENB is overvalued. The end of the black line sits at the company’s current P/E ratio, which is 17.0 (circled).

Here’s how to calculate the degree of overvaluation: Make a ratio out of the two P/Es.

That valuation ratio suggests that ENB is 13% overvalued.

To calculate the company’s fair price, we divide its actual price by the valuation ratio:

Valuations are assessments, not physical traits, so they are never exact. For that reason, we want several points of view. So we use other models.

In the next model, we “normalize” the fair-value reference line to reflect the stock’s own long-term valuation rather than the market as a whole.

I use the stock’s 5-year average P/E ratio (circled) for this step. The fair-price reference line is in blue on this graph. 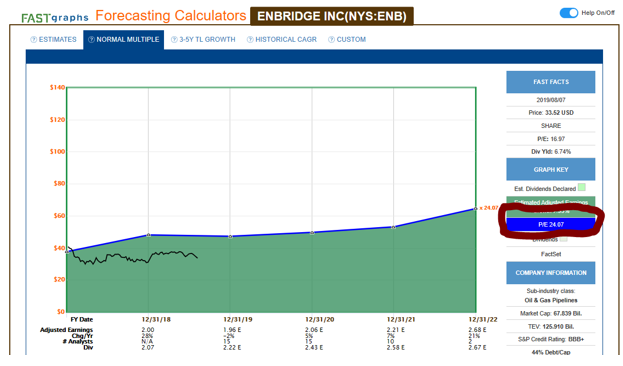 This method presents a different picture. ENB’s 5-year average P/E ratio is 24 (circled). The blue reference line is drawn using that P/E ratio, which moves the reference line up above ENB’s actual price, suggesting that ENB is undervalued.

The next step is to consult Morningstar’s valuation of the stock.

Instead, they use a discounted cash flow (DCF) model. Using conservative projections, they discount all of the stock’s estimated future cash flows back to the present to arrive at a fair value estimate. (If you would like to learn more about how DCF works, check out this excellent explanation at moneychimp.) 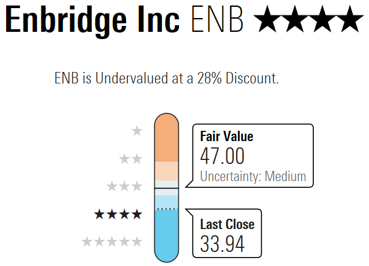 Morningstar calculates a 28% undervaluation. Often, a gap this wide would rate 5 stars, in my experience with Morningstar. But, as you can see, ENB’s price falls just above their 5-star territory.

In any event, Morningstar rates ENB as undervalued, with a fair price of $47 per share.

If a stock ‘s current yield is higher than its historical average, that suggests that it is a better value than usual, because you are “paying less” for the stock’s dividends, because you can buy more shares with your money. Because dividends are paid per share, you will get more dividends for your money.

In Enbridge’s case, it’s mostly because its price has been sliding down, because we know that its dividend has been steadily rising. 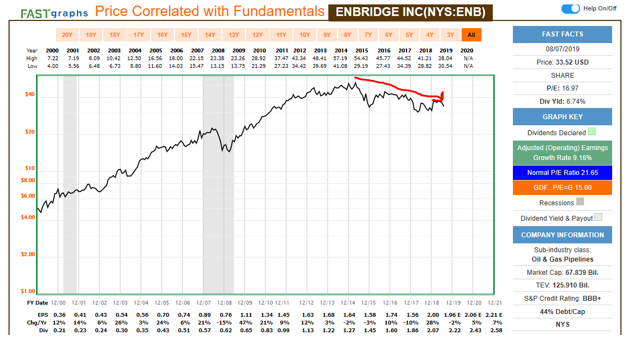 Enbridge’s price has been drifting down for about five years. That’s why its valuation has become favorable, and its yield has risen to 6.7%. 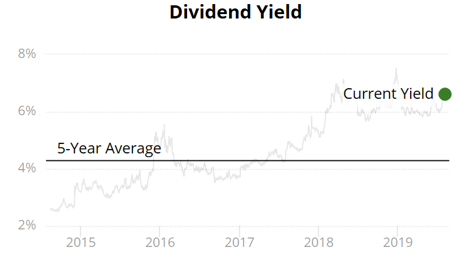 In fact, ENB’s current yield of 6.7% is 56% higher than its 5-year average yield of 4.3%. That suggests that the stock is significantly undervalued.

That would suggest 36% undervaluation. When I use this comparitive-yield method, I cut off the difference at 0.80, because this is an indirect method of measuring valuation, and I want to avoid extreme results. 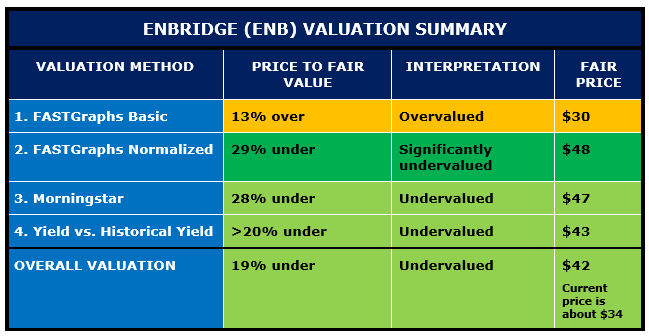 The average of the four methods suggests a fair price of $42 for Enbridge shares, compared to its actual price of about $34.

The first valuation model produces, in this case, a result that is quite different from the other three. However, I wouldn’t toss it out, because it does tend to moderate the other three, which is the conservative thing to do.

With its excellent yield, fast growth rate, decent quality rankings, 23-year history of raising its dividends, and 19% undervaluation, I think that Enbridge is an attractive dividend growth investment.

Enbridge is a holding in Jason Fieber’s FIRE fund.

This is not a recommendation to buy Enbridge. As always, perform your own due diligence. Check the company’s complete dividend record, business model, financial situation, and prospects for the future, as well as its effect on your portfolio’s diversification.

And when you are investing, always be sure to consider how and whether the asset you are considering fits (or does not fit) your long-term investing goals.