The trade war has escalated into an extremely disruptive market force, as the presidents of the United States and China have stopped pretending to be buddies. 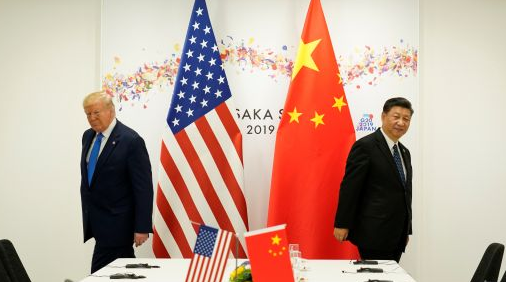 Most recently, Donald Trump went against the recommendations of his own advisers and threatened more punitive tariffs; Xi Jinping’s people responded by saying China would stop buying American agricultural products.

Trump then threatened to push the tariffs even higher, so Xi devalued the yuan.

Remember the good old days, when the Tweeter In Chief claimed: “Trade wars are good, and easy to win”?

That was 17 months ago … and it hasn’t been easy … and the war is nowhere near won.

And then there was Monday, August 5.

After China responded to Trump’s latest threat by devaluing the yuan, the market recorded its worst one-day loss of 2019. 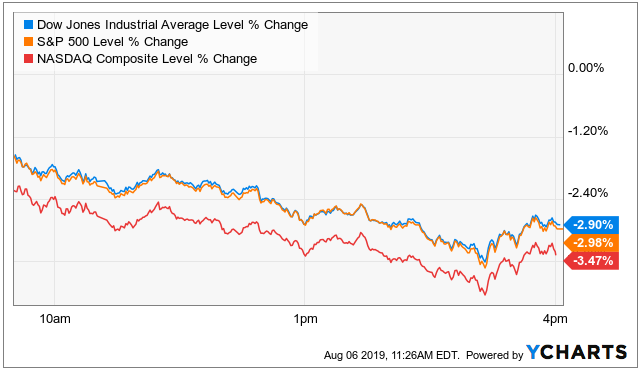 So what’s an investor to do?

Well, that depends upon one’s goals, time horizon, risk-tolerance level or other factors.

On Tuesday, August 6 — as scheduled — I executed a purchase order on Daily Trade Alert’s behalf for 8 shares of oil giant Chevron (CVX) at $118.81 apiece. 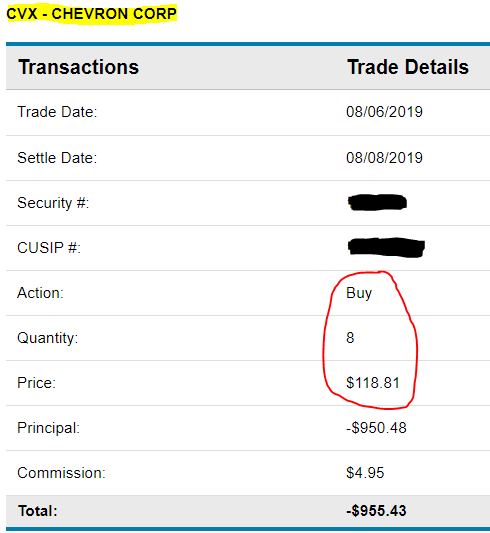 I certainly can understand a big investor being somewhat hesitant to make major stock purchases in such volatile times.

The IBP, however, is a fairly new endeavor in which relatively small amounts of money are invested at regular intervals — a system similar to dollar-cost averaging.

We make two buys of approximately $1,000 each per month.

Total return matters, but we are mostly concerned with building a growing, reliable income stream through the Dividend Growth Investing strategy.

And we’re not going to let the news of the day scare us away from constructing the IBP.

Since the Income Builder Portfolio’s inception in January 2018, we have purchased shares of 26 companies; Chevron is the 12th that we have bought on two separate occasions.

In my previous article, I discussed many reasons for choosing CVX again. The company’s commitment to its dividend — as illustrated in the following slide from its most recent investor presentation — ranks high on the list. 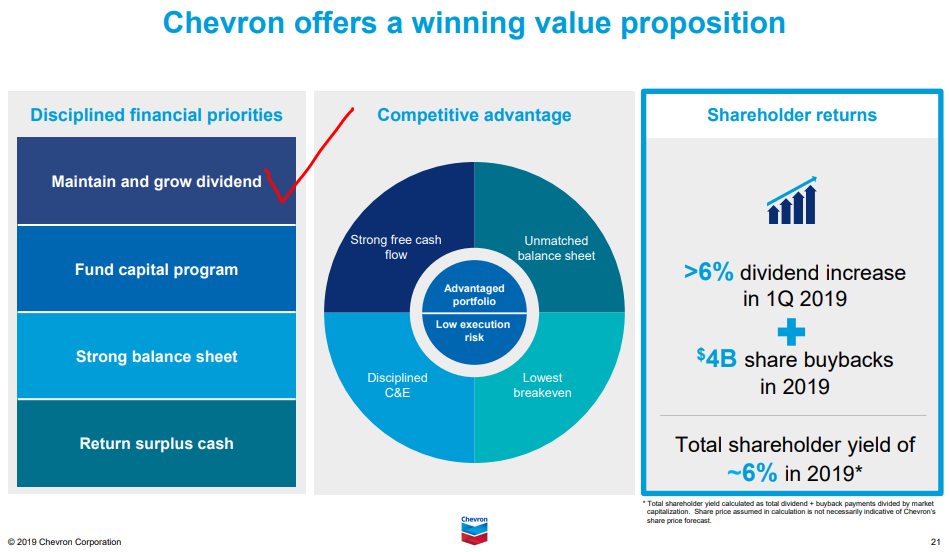 The 6.25% dividend raise implemented by CVX earlier in 2019 marked the company’s 32nd consecutive year of growing its payout.

Because we made this addition before the August 16 ex-dividend date, the portfolio will receive $20.44 on Sept. 10.

Similar action is happening with every IBP position, and that’s how an income stream gets built.

With this buy, Chevron becomes the portfolio’s No. 3 income producer. Here are the top 5:

By and large, analysts are bullish on Chevron, as illustrated by the following Thomson Reuters survey of 22 market-watchers.

Those who believe CVX shares will outperform over the next year or so include analysts from CFRA, Credit Suisse, Schwab and Value Line.

The above graphic from Value Line shows a “Relative P/E” of 0.84, indicating that Chevron is undervalued compared to most companies in VL’s 1,700-stock coverage universe. (The mean Relative P/E is 1.00.) 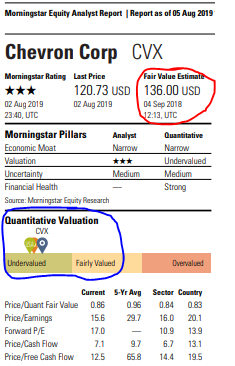 Using FAST Graphs, Chevron appears slightly undervalued if one looks at how its current P/E ratio compares to its 10-year norm. 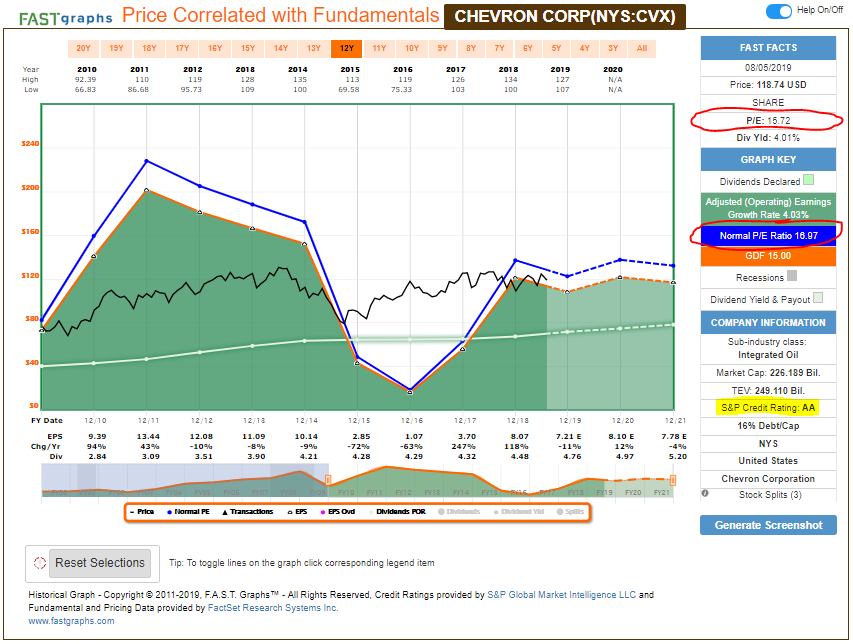 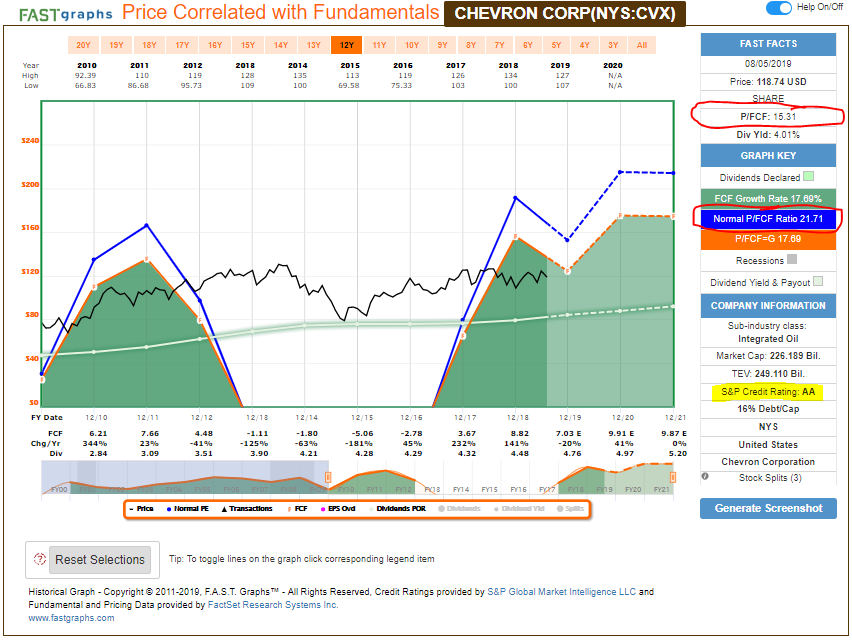 Lastly, although it is impossible to really know how a company will do in the future, I do like to look at projections as just one more bit of information.

There is no end in sight to Trump’s trade war, and some economists predict that it could trigger the next recession.

Nevertheless, we will keep buying stocks for the Income Builder Portfolio because that’s what our Business Plan mandates: Continue investing in high-quality, dividend-growing companies, through good markets and bad.

That has been a winning strategy for a century’s worth of investors, and there is little reason to think that will change.

If you follow the IBP closely, you might have noticed that we made only one buy in July. That is because my wife Roberta and I were busy celebrating our 36th anniversary with a long vacation to the Oregon Coast and other Pacific Northwest destinations. 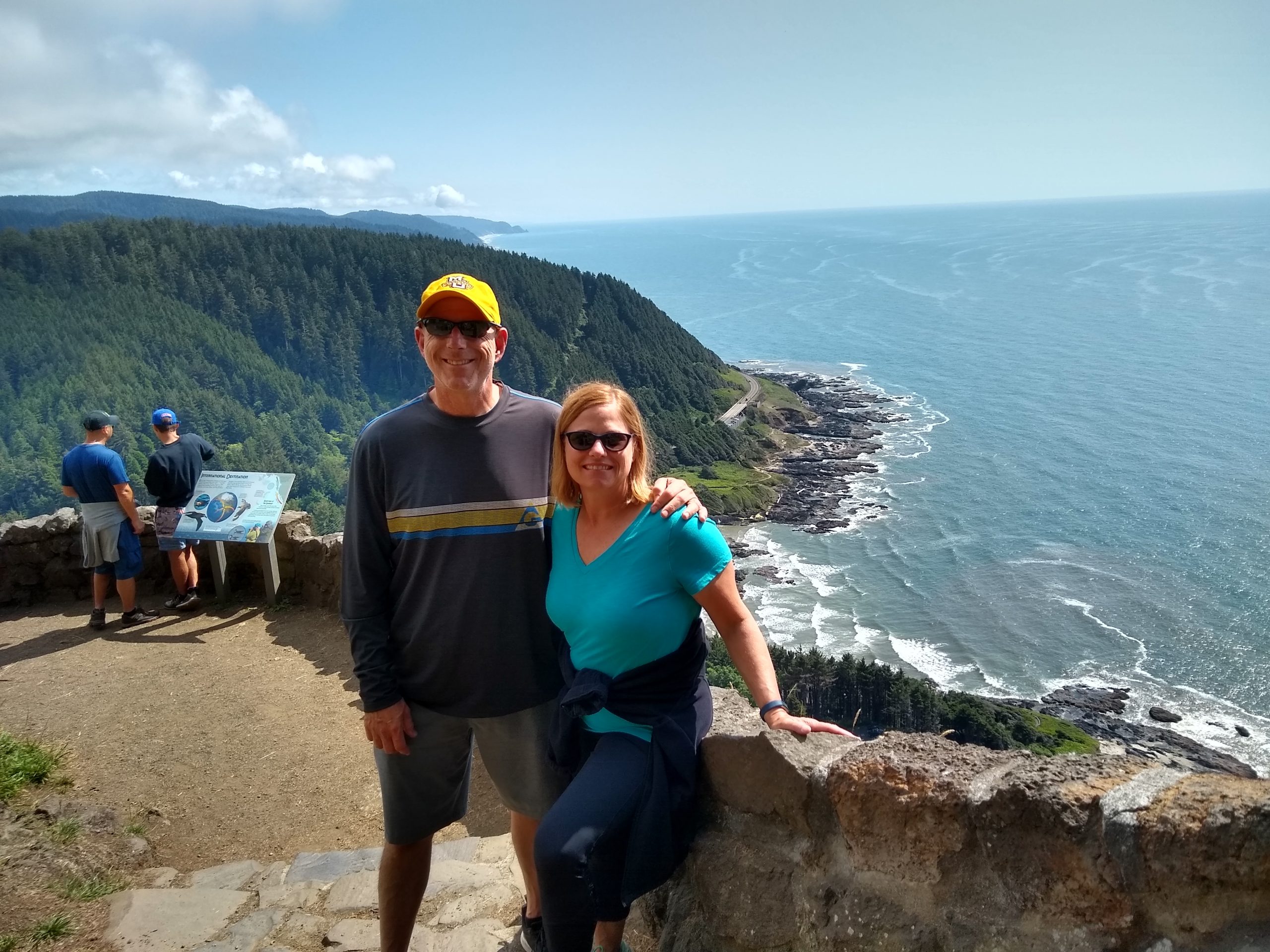 In the photo above, we were at the stunning Cape Perpetua overlook. As you can see, we weren’t terribly concerned about what Trump was tweeting or how Xi was responding or what the stock market was doing that day.

To make up for the IBP adding one fewer than our customary two stocks last month, I will select three in August. Chevron’s the first of those, and I’m confident it will be a fine long-term holding despite the political shenanigans that undoubtedly will agitate many investors in the years to come.

As always, you are strongly encouraged to do your own due diligence before buying any stocks.