Six months ago, I agonized about which American energy giant to select for DTA’s Income Builder Portfolio.

Should I go with Exxon Mobil (XOM), the higher yielder and hopeful “turnaround play”?

Or should I choose Chevron (CVX), another long-time Dividend Growth Investing favorite, and one that seemingly already had turned things around?

In selecting Chevron, I said this in my Feb. 9 article:

Some might wonder why I selected Chevron rather than its larger peer, Exxon Mobil.

Although I will go into valuation more in next week’s post-buy article, I do believe CVX has a somewhat more inviting valuation … As the IBP Business Plan says: “When trying to decide between two or more similar companies, the more attractively valued stock usually will be selected.”

Nevertheless, the CVX-or-XOM debate is legitimate, and I probably could have flipped a coin to choose between the two for the IBP’s first Energy-sector position.

I imagine the portfolio will own XOM before it’s all said and done.

I still imagine that Exxon Mobil will find its way into the portfolio one day.

That day, however, will not be Tuesday, August 6 — when I will execute a purchase order on Daily Trade Alert’s behalf for about $1,000 worth of Chevron.

Again, I seriously considered Exxon Mobil. But I kept asking myself why I would initiate a position in XOM rather than build up our CVX stake … and I could not find justification for doing so.

Both reported second-quarter earnings on Friday; although Exxon Mobil’s looked better than in previous quarters, its presentation certainly was no more appealing than Chevron’s (more on the CVX report later).

Then there’s the companies’ price history, both recent and more extended.

Here, for example, is a Y-Chart of the companies’ 10-year total return: 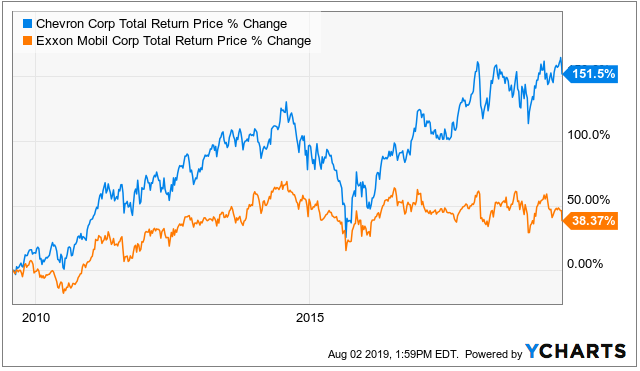 Although one can’t do comparisons without talking about both companies (as I have), I don’t really want to use this as an XOM-bashing exercise. After all, I really do think Exxon Mobil is a fine energy company that eventually will be part of the Income Builder Portfolio.

In the articles I wrote back in February, I made my case for Chevron, and I don’t want to repeat everything here … so I will talk a little about what has happened since then.

Interestingly, one of the biggest happenings is what didn’t happen.

On April 12, Chevron announced plans to acquire Anadarko Petroleum (APC) for $33 billion. “Mr. Market” thought Chevron was paying too much and would gain too little, and shares fell 5% that day.

A smaller rival, Occidental Petroleum (OXY), decided 12 days later to submit its own bid for Anadarko in a $38 billion deal. Mr. Market didn’t like that, either, fearing that Chevron would get in a bidding war; share price fell 3%.

On May 9, Chevron officially bowed out of the bidding for Anadarko, and came away with a $1 billion breakup fee that it could use to boost its share-buyback program by 25%.

Winning in any environment doesn’t mean winning at any cost. Cost and capital discipline always matter, and we will not dilute our returns or erode value for our shareholders for the sake of doing a deal.

Mr. Market cheered, with shares advancing 3%, ending what had been a whiplash-inducing 4-week rollercoaster ride. 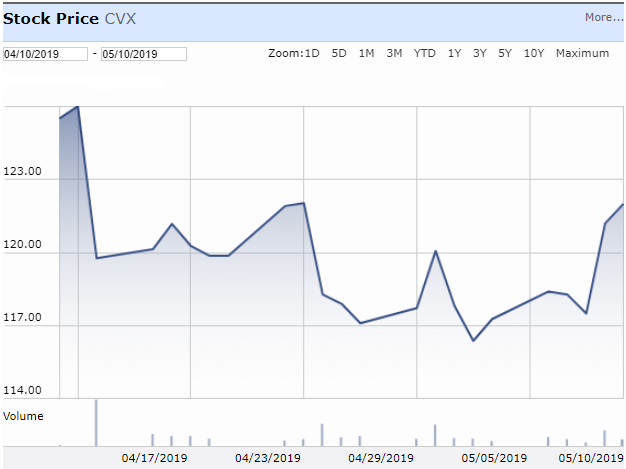 Otherwise, the main things to happen since our February purchase included:

In other words, investors (including the IBP) have had few if any reasons to complain these last six months.

Thanks partly to the Anadarko break-up windfall, the most recent report revealed Chevron’s highest quarterly earnings per share ($2.27) since 2014, when Brent crude price was more than $100/barrel (it’s about $62 now).

Even not including the break-up fee, though, CEO Wirth was touting his company’s performance:

Net oil-equivalent production was the highest in the company’s history, driven by continued growth in the Permian Basin and at Wheatstone in Australia. … Our strong financial and operational results reflect consistent execution, allowing us to pay our dividend, fund our attractive capital program, further strengthen our balance sheet and return surplus cash to our shareholders. After suspending our share repurchases while in merger discussions with Anadarko, we resumed buybacks in May and expect to be at our planned repurchase rate of $5 billion per year in the third quarter.

Normally, a company must have a strong balance sheet to do significant buybacks. Additionally, fewer outstanding shares means money earmarked for dividends can go further. 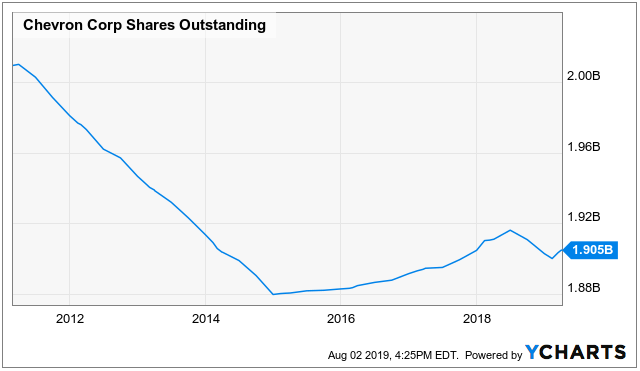 Chevron has reduced outstanding shares by nearly 2 billion over the last eight years, and that figures to go up considerably with the ramped-up schedule the company has announced.

After several years of only small dividend increases, CVX announced a 6.25% raise in this year’s first quarter, and the yield is now nearly 4%.

Chevron, one of a dozen companies we will have bought twice since the IBP’s inception in January 2018, will become the 26-stock portfolio’s third-largest income producer.

The biggest near-term risk for Chevron probably is the same as the risk for Exxon Mobil (and many other companies, whether in Energy other sectors): A recession could be triggered by Donald Trump’s seemingly never-ending trade war with China.

Nevertheless, we are determined to keep building the IBP with our $1,000 twice-monthly purchases, through good times and bad, and I believe that CVX will be a fine long-term position for the portfolio.

I will thoroughly examine Chevron’s valuation and present other information in my post-buy article, which will be published Wednesday, August 7.