When possible, I try to get good value for DTA’s Income Builder Portfolio. These days, that’s getting tougher and tougher.

Although one always can find “cheap” stocks, it’s not easy finding high-quality companies at attractive prices in Year 11 of a bull market that seemingly hits new highs every week.

Here’s what the IBP Business Plan says about valuation:

Although valuation will be considered before each purchase, it will be a secondary consideration to the perceived quality of the company.

An investor making sizable additions to a large, established portfolio might be primarily concerned with valuation. The IBP, however, is a DGI portfolio that will be built over time through regular $1,000 purchases – similar to the concept of dollar-cost averaging.

We want to build this relatively new portfolio, we don’t want to leave money sitting idle, and we do not want to compromise the quality of our endeavor by buying only out-of-favor companies.

It’s a challenge, and years from now, we might look back and say we “overpaid” for Company X or Company Y. Generally, though, I believe we will be happy, long-term, that we have concentrated on quality even as we do keep an eye on valuation.

Our most recent great-but-not-cheap selection was Honeywell International (HON), and my previous article pointed out all the wonderful things about the company. 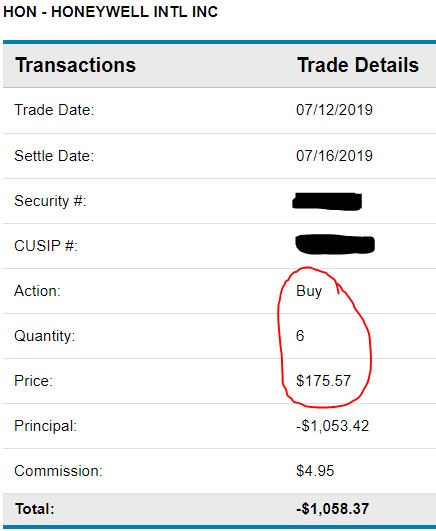 The following graphic from Morningstar Investment Research Center suggests we paid about 8% over fair value for Honeywell; in addition, the highlighted area reflects the quality of the company.

My other main go-to source for valuation is FAST Graphs. The red-circled area below shows that HON is trading higher than its normal P/E ratio for this decade, while the purple circle focuses on the black price line being well above the blue normal P/E line. 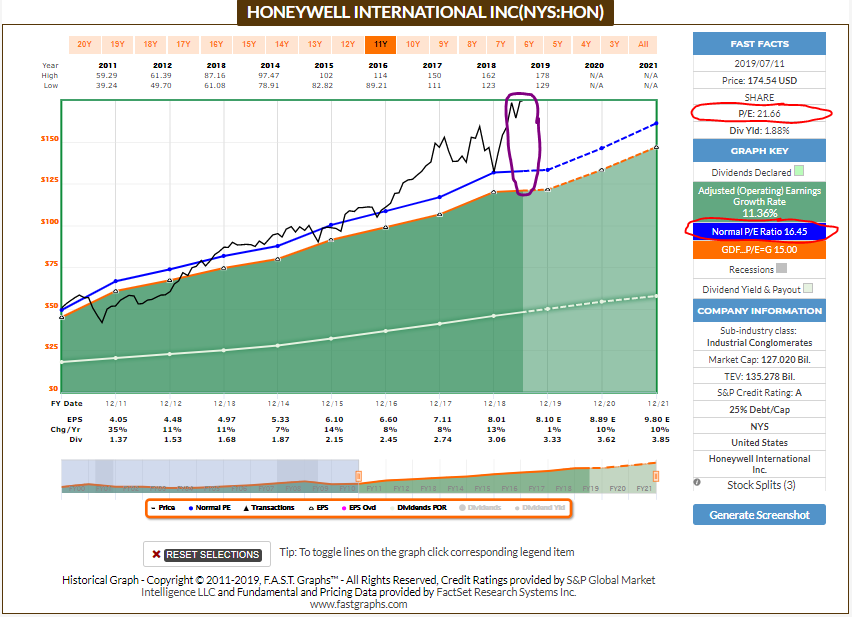 Value Line, meanwhile, assigns a “Relative P/E” of 1.01, reflecting its assertion that Honeywell’s valuation is right in line with the median of estimated P/E ratios of the 1,700 stocks that VL covers. 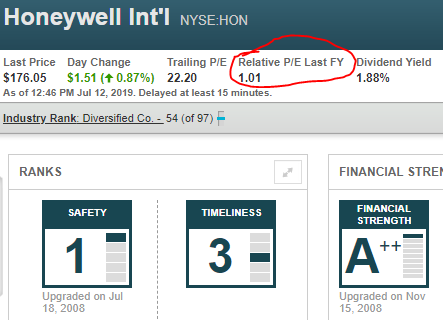 The following “Financial Sonar” from Jefferson Research shows the consistency of Honeywell’s strength as a business. Indeed, the only thing that has changed over the last year, in the researcher’s estimation, is that HON’s valuation has improved from “medium risk” to “low risk.” 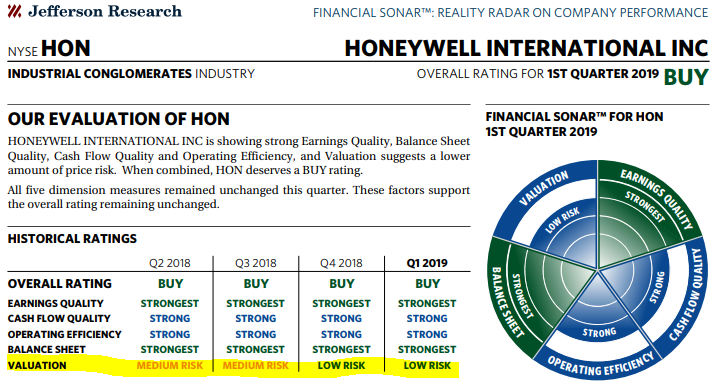 I think the company is fairly valued, so I was willing to add to the IBP’s Honeywell stake. And I agree with many analysts who believe HON remains an attractive stock to own.

Just a few days ago, Barclays raised its target price from $177 to $186, and plenty of other analysts also are sweet on Honeywell.

Thomson Reuters surveyed 24 analysts, and 20 of them consider HON to be either a “Buy” or a “Strong Buy.” 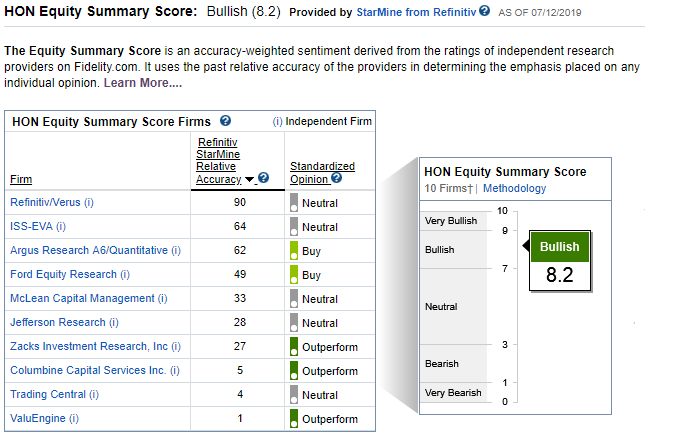 A HONey Of A Dividend

Dividend Growth Investing is the principle strategy I use in building the IBP, so naturally I like the consistency and strength of Honeywell’s distribution. 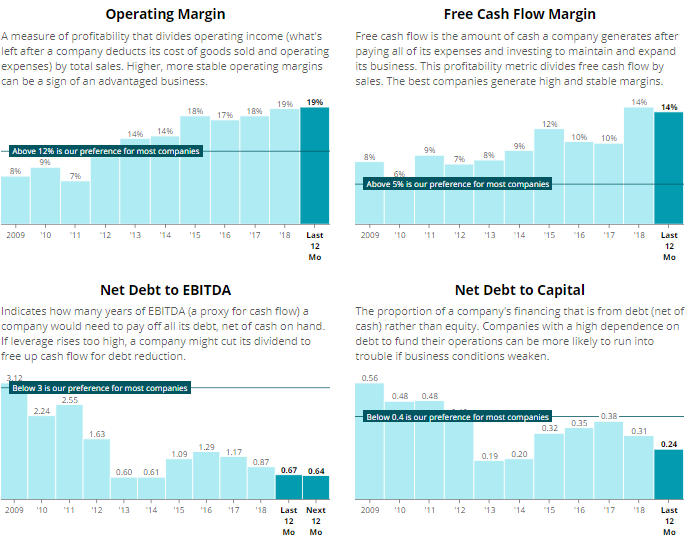 Two months ago, Barron’s ran an article titled, 7 Dividend Stocks for Volatile Times Ahead, and Honeywell was one of the choices. 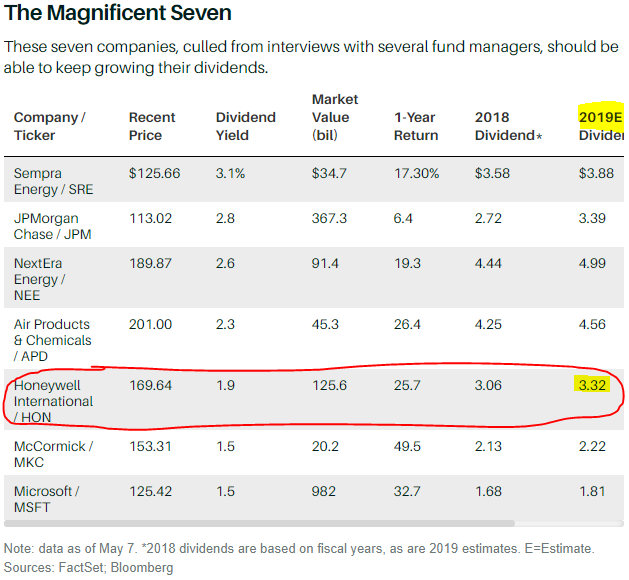 In the above graphic, I highlighted the estimate for the 2019 dividend because I think it’s actually low. It assumes that later this year Honeywell will raise its quarterly dividend only 4.9%, from 82 cents to 86 cents.

As the following chart shows, Honeywell has had nothing but double-digit increases every year this decade; given the company’s strong free-cash flow, I would be surprised by a sub-5% raise.

This is the second time we have bought HON for the Income Builder Portfolio, the first being back on March 12, and we now own 13.0332 shares of the company.

As an annual income producer, Honeywell stands right in the middle of the IBP pack — ranking 13th of our 26 positions.

In early September, the portfolio will receive a dividend of $10.69.

When reinvested, that will buy about .06 of a share of Honeywell stock.

Then, come December, the new share total of 13.0932 will generate a dividend based on whatever the raise ends up being.

Honeywell — and every other IBP position — will repeat that process over and over again for years to come, demonstrating why we gave this project the name we did.

One reason the market keeps marching higher is that investors assume the Federal Reserve is going to cut its key interest rate later this month.

Most economic indicators suggest that it’s unnecessary (and perhaps even foolhardy) to provide additional stimulus now.

Many observers are concerned that Fed chairman Jerome Powell simply is caving in to the relentless barrage of criticism from Donald Trump, who desperately wants a high-flying market leading up to the 2020 presidential election. 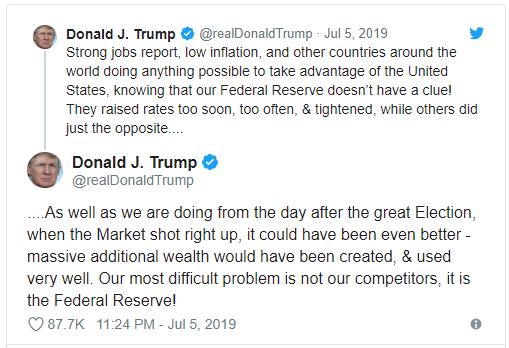 Whatever the reason, it appears the cut will happen, which is likely to extend the market advance at least for the near-term — a situation that will continue making it difficult for investors to identify attractively valued, high-quality companies.

The Fed announcement is expected on July 31. Coincidentally, due to a long-standing family commitment, I will not be making my next IBP selection until later that week.

It will be interesting to see what transpires … but until then, I feel good about adding to our position in Honeywell, one of the world’s great companies.