Bristol-Myers Squibb (BMY) is a major pharmaceutical company headquartered in NYC. It celebrated its 130th anniversary in 2017.

BMY also has healthcare products in areas such as diagnostics, infant formula, orthopedic implants, and health and beauty aids.

When completed, BMY’s pending acquisition of Celgene (CELG) will also make it a player in biotechnology. Shareholder approval has been secured, and the companies are awaiting final regulatory approval.

Here is BMY’s Quality Snapshot. I derive this from the following sources, which I have come to trust and respect over the years:

BMY gets above-average and excellent grades across the board. On a 0-to-5 point scale for each metric in the snapshot, BMY would collect 22 out of 25 points. That suggests that BMY is a very high quality company.

The company has increased its dividend 10 straight years (the dividend was held steady in 2009), including a 2.5% hike earlier this year.

That small increase is in line with BMY’s long-run dividend growth record.

The dividend is reliable, safe, and grows at a slow but steady rate. 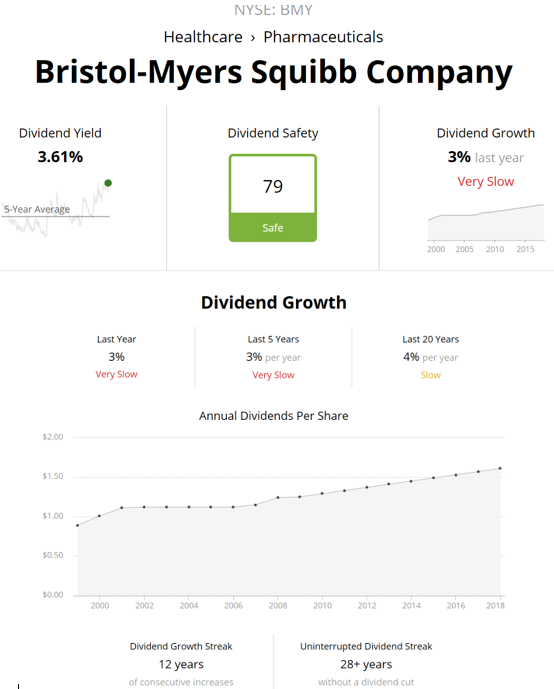 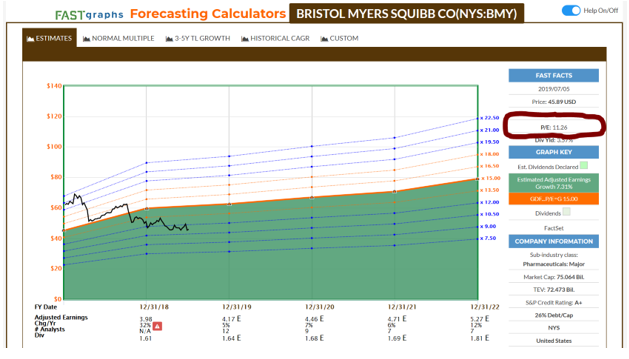 The orange line represents a fair-price reference line, computed at a P/E ratio of 15. The black line is BMY’s actual price.

Since the black line is below the orange line, it suggests that that BMY is undervalued. The end of the black line reflects the company’s current P/E ratio, which is 11.3 (circled).

That valuation ratio suggests that BMY is 25% undervalued.

To calculate the company’s fair price, divide its actual price by the valuation ratio:

Valuations are assessments, not physical traits, so we want several points of view. We’ll get more from the following steps.

I use the stock’s 5-year average P/E ratio (circled) for this step. The fair-price reference line is in blue on this graph. 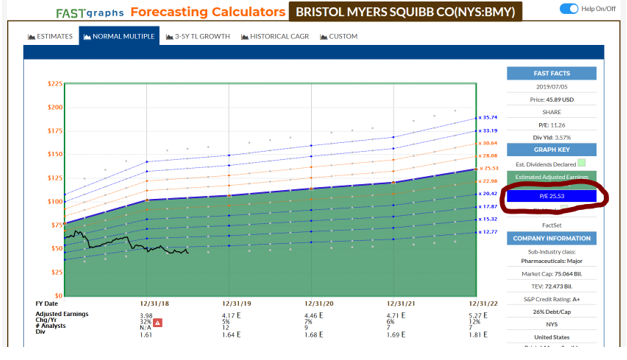 This method suggests that BMY is even more undervalued than the first step. That’s because BMY’s 5-year average P/E ratio (circled) is 25.5, which is much higher than the market’s historical average of 15 used in the first step.

The next step is to consult Morningstar’s valuation of the stock.

Instead, they use a discounted cash flow (DCF) model. Using conservative projections, they discount all of the stock’s estimated future cash flows back to the present to arrive at a fair value estimate. (If you would like to learn more about how DCF works, check out this excellent explanation at moneychimp.)

Morningstar calculates a 29% undervaluation. Normally, a gap this wide would rate 5 stars, in my experience with Morningstar. At any rate, they agree that BMY is very undervalued.

If a stock is yielding more than its historical average, that suggests that it is a better value than usual, because you are “paying less” for the stock’s dividends.

With a well-valued stock, you can buy more shares with your money. Because dividends are paid per share, you will get more dividends for that money.

In BMY’s case, it’s mostly because its price has been sliding down, because we have seen that its dividend growth has not been very fast. The inverse relationship between yield and price is illustrated in this 5-year graph. 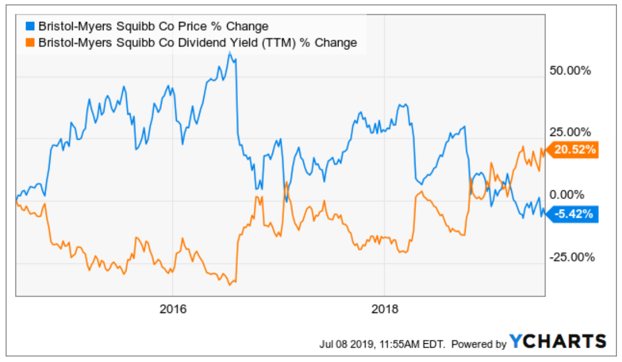 BMY’s dividend yield has gone up 21% while its price has declined 5%.

Thus, BMY’s current yield is quite a bit higher than its 5-year average. 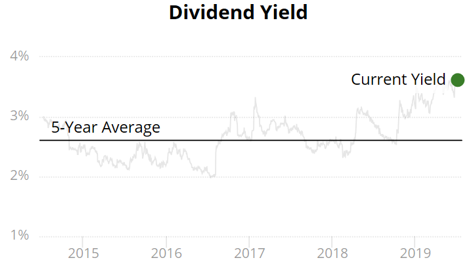 BMY’s current yield of 3.6% is 38% higher than its 5-year average yield of 2.6%. That suggests that the stock is undervalued.

That would suggest 29% undervaluation. When I use this comparitive-yield method, I cut off the difference at 0.80, because this is an indirect method of measuring valuation, and I want to avoid extreme results. 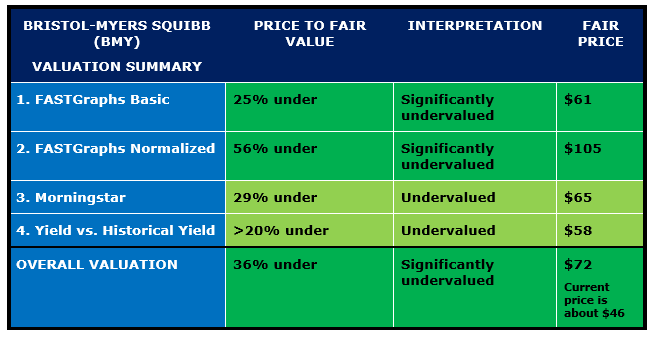 All four methods agree that BMY is undervalued.

The average of the four methods suggests a fair price of $72, compared to BMY’s actual price of about $46.

Even if we toss out Method #2 as an outlier, we would get a fair price of $61, which would suggest that BMY is selling at a 25% discount to fair value. I would still call that “Significantly undervalued” and color it dark green.

Whichever way you look at it, BMY seems to be more than 20% undervalued.

With its good yield, very good quality rankings, and significant 25%-36% undervaluation, I think that BMY is a very attractive dividend growth investment.

Assuming that BMY’s 3.6% yield is “enough” for you, its biggest drawback is its consistently slow dividend growth rate in the 2.5% to 3% range each year.

The only article discussing BMY within the past two years on Daily Trade Alert is These 3 Income Stocks Are Saving Lives (November, 2017), which was written when BMY’s yield was just 2.5%. Its yield is 44% higher today.

This is not a recommendation to buy Bristol-Myers Squibb. As always, perform your own due diligence. Check the company’s complete dividend record, business model, financial situation, and prospects for the future, as well as its effect on your portfolio’s diversification. And always be sure to consider how and whether any asset fits (or does not fit) your long-term investing goals.

This Sector Is Signaling the Tech Rally Isn’t Over Yet

Around the World, Renewable Energy is Gaining Momentum

Upgrades and Downgrades for Thursday, 12/3

This Stock Has Plenty of Upside Ahead