As an investor, I don’t have many rules. I find them too restricting, too likely to box me into doing something that’s unnecessary.

I try to view each company I’m considering on its own merits, and then decide if it’s right for my portfolio.

I do have a few guidelines I try to stick to, however, and one of them is that I generally don’t like buying a company shortly before its earnings announcement.

For me, it’s no fun to buy a stock for $100 on April 1 only to see the company have a disappointing earnings report a week later that triggers a decline to $90. 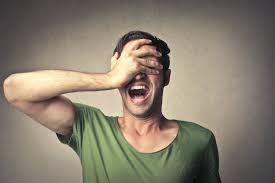 Part of it is psychological, I know that. After all, if it truly is a strong company it will recover over time.

On rare occasions, though, the news can be so bad that it reveals fundamental flaws in the company’s operations — and I definitely want to avoid that kind of situation.

For example, the biggest loser in DTA’s Income Builder Portfolio has been 3M (MMM).

The company’s share price was moving up nicely this year until an awful earnings report on April 25, filled with doubts about the company’s future, ignited a 13% one-day plunge … and it’s only been downhill from there.

As disappointing an investment as 3M has been since I selected it for the IBP way back in January 2018, it would have been doubly disappointing had I added to the position shortly before that earnings call.

That brings me to my next IBP pick, Honeywell International (HON) — which, like 3M, just happens to be one of the world’s largest industrial conglomerates.

Come Friday, July 12, I will execute a purchase order on Daily Trade Alert’s behalf for about $1,000 worth of Honeywell stock.

Given that we bought 7 shares of HON on March 12, this will almost double our position in the aerospace, building technologies and productivity solutions firm.

This will be our 37th purchase for the IBP, and the 11th company we will have bought twice.

On Thursday, July 18, about a week after we make the buy, Honeywell will release its 2019 second-quarter earnings report.

I am not overly concerned, as HON’s earnings-related track record has been outstanding.

Actually, “outstanding” sells Honeywell short. Partly because of the quality of the company’s operations and partly because it tends to be conservative with its own projections, HON has met or exceeded EPS estimates for every single quarter since the end of the Great Recession.

For many years now, if an investor had bought shares of HON stock a week before its earnings presentation, those shares would have become more valuable after the report.

Here is a look at the trend the last 10 quarters:

As impressive as it has been for Honeywell’s stock price to have gone up after earnings in 9 of the 10 quarters (and the trend actually dates back much further), even that isn’t telling the whole HON story.

The one time the price retreated — the day of the Q3 2018 presentation — the pullback wasn’t due to a disappointing report.

EPS actually had surged 17% year-over-year, and the market had reacted very favorably, sending the price up more than 3%.

That afternoon, however, the Security and Exchange Commission announced it was opening an investigation into Honeywell’s accounting of asbestos-related liabilities — and THAT is what triggered the price decline. (More on that later.)

The red-circled areas of the following FAST Graphs illustration show how only once in the last 15 years — 2009, in the wake of the recession — has Honeywell suffered an EPS decline. 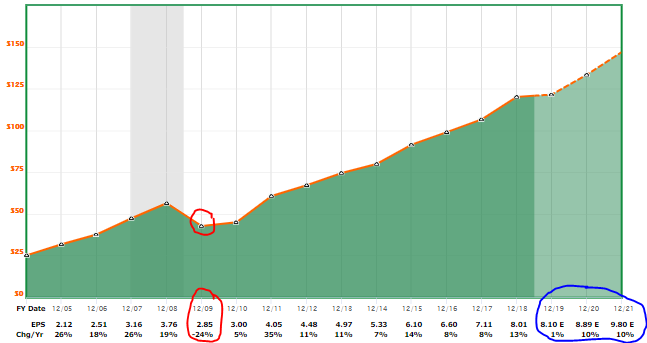 The blue-circled area shows forward expectations: After a small gain this year, with the company still working through the spin-offs of two units, double-digit growth again is forecast for 2020 and 2021.

I could say so many more positive things about Honeywell, but I don’t want to repeat everything I said in my article of only a few months ago, so I will just throw out a few highlights:

Since my last write-up, Honeywell had another fine earnings report — of course! — with 20%-plus, year-over-year gains in its two largest divisions. 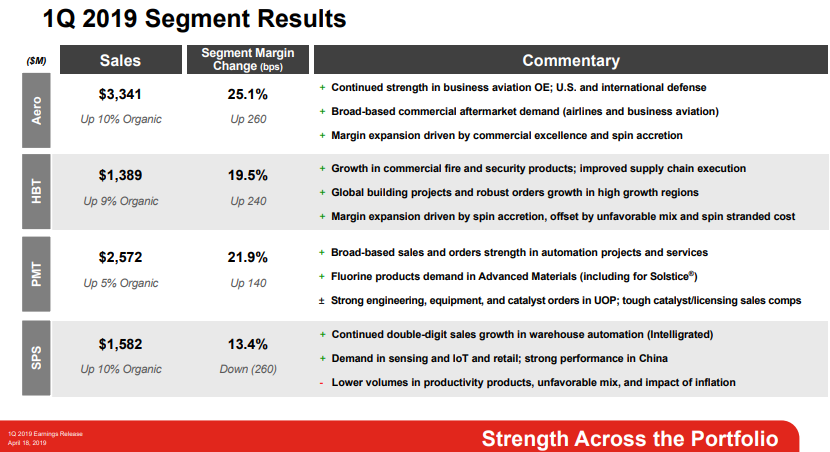 Like any other company, Honeywell faces risks and challenges.

I already mentioned the SEC investigation involving a company (Bendix) that Honeywell sold 5 years ago. That case remains unresolved. Litigation headaches and costs are common for major corporations, and it will be some time before we know exactly how this all plays out.

Morningstar pointed out a few other risks Honeywell faces:

Aerospace is a long-cycle business that can have a prolonged downturn period depending on global demand for air travel, as well as military defense spending, which can face headwinds like sequestration threats in the United States. Home and Building Technologies, moreover, faces headwinds in the event of a slowdown in global residential and commercial construction, and Performance Materials and Technologies faces similar prospects with downturns in the oil and gas market, particularly with the price of oil. That said we’re less concerned with normal ebbs and flows of the macro environment.

As an international conglomerate, Honeywell also could be affected negatively by the ongoing trade war between the Trump Administration and China.

The IBP’s Honeywell position has performed quite well since we bought it on March 12. In addition to providing the expected income, our stake has experienced total return of 14.3% — almost exactly double the gain of the S&P 500 Index over that span.

Looking ahead, and beyond the short-term, I am confident HON will be a great holding for the Income Builder Portfolio for years (or even decades) to come.

My article about the execution of our Honeywell purchase, which will include an examination of the stock’s valuation, will be published Saturday, July 13.