Many detractors say that although the income is nice, they want the kind of competitive total return that only growth stocks can provide.

Others, citing the “widow-and-orphan stocks” often included in DGI portfolios, say the strategy is about as exciting as Ben Stein teaching high school economics. (No wonder Ferris Bueller played hooky.)

Well, DTA’s Income Builder Portfolio has seen 12% growth in income year-over-year … even as it has crushed the overall market in total return.

Boring health-care conglomerate Johnson & Johnson (JNJ) is generating twice as much income for the portfolio as it did a year ago.

And 16 IBP components have outperformed the S&P 500 Index since we bought them — led by the 12-fold domination turned in by boring burger maker McDonald’s (MCD).

You read that right: McDonald’s stock has done 12 times as well as the overall market since we bought it for the IBP!

Not so boring after all, eh?

I have been selecting stocks twice a month for the IBP since January 2018, using approximately $1,000 of Daily Trade Alert’s money for each purchase.

So far, we have bought shares of 26 companies, investing nearly $36,000 into what we expect will be a long-term endeavor.

The goal, as stated in the IBP Business Plan:

The secondary goal is to build a portfolio that will experience good total return, something we believe will occur organically because of the excellent companies owned.

In keeping with that theme, let’s talk about dividends first.

That’s deceptive, though, because the IBP is not a passive portfolio, with new money getting invested every couple of weeks.

So the best thing I can do is present a table showing some meaningful (and impressive) income-related data, both for Q2, the year and the future. 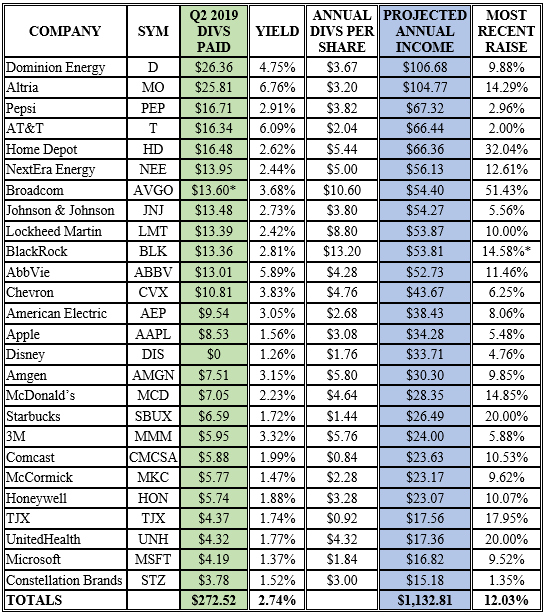 *AVGO normally pays its Q2 dividend by June 30, but this was delayed until July 1; I have included it in this report for ease of comparisons, both past and future. *BLK had two dividend raises in the last year, totaling 14.58%. 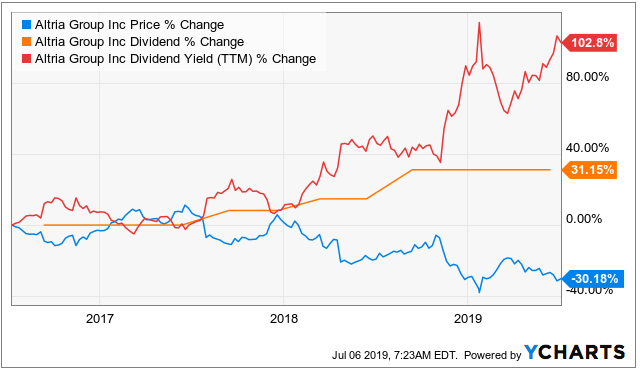 Again, those comparisons aren’t especially meaningful because so much new money has come into the portfolio and so many additional investments have been made.

The best way to quantify total return, in my estimation, is to compare the growth of each position to what the return would have been had the money been invested in a universally accepted proxy for the overall market — such as the SPDR S&P 500 Trust ETF (SPY). 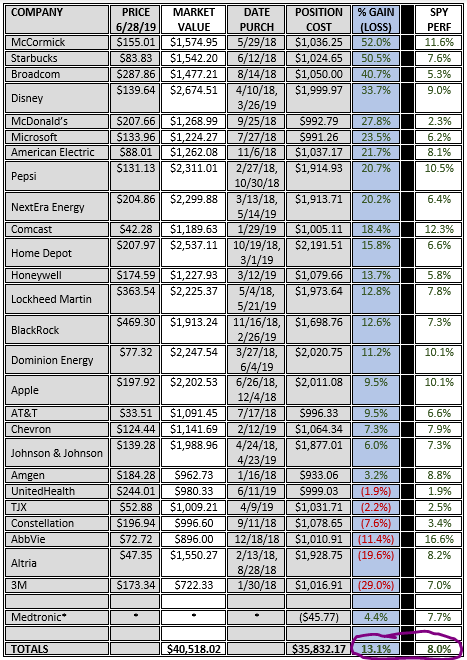 As the table above shows, the IBP has had a total return of 13.1% since its inception on Jan. 16, 2018. Had we bought shares of SPY on the exact same date that we bought each equity, the return (with dividends reinvested) would have been 8%.

That’s not merely outperformance, my friends, that is domination.

The SPY data was acquired through the calculator at DividendChannel.com. The following example shows how I plugged in our McDonald’s investment date (June 25, 2018) to arrive at a total return for SPY.

Sharp-eyed readers might have noticed a slight discrepancy between what the Dividend Channel shows for MCD’s total return (27.09%) and what MCD’s actual gain was within the IBP (27.8%).

That’s because Dividend Channel uses data from each day’s close of trading, while I bought MCD (and every other IBP position) during the trading day.

Obviously, the same would have been true for each buy of SPY, but I still think this method does a very good job of approximating the results.

A few other notes regarding the total return table: 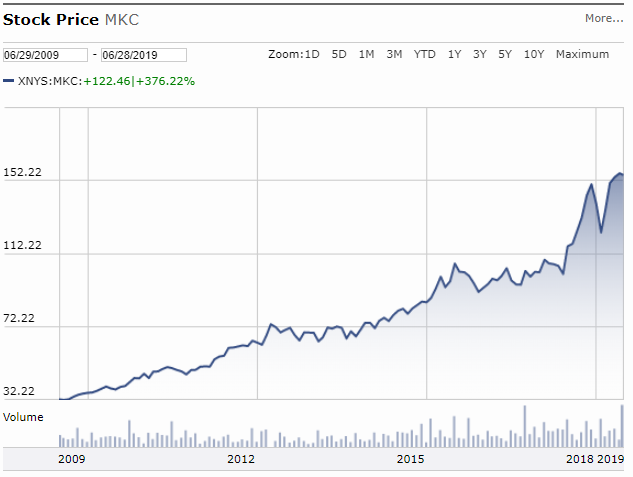 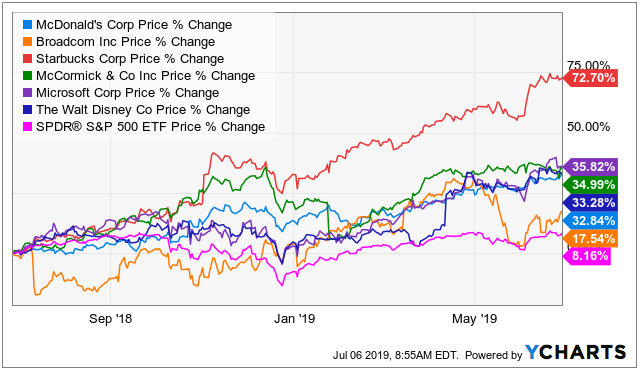 (This graphic shows gains over the last 12 months, and therefore does not correspond with the dates we purchased the stocks for the IBP.)

Yep, even our “boring” telecom and utilities have outperformed the market.

Here, from Simply Safe Dividends, is a good snapshot about where the Income Builder Portfolio stands at the end of Q2:

The income is flowing in strongly, the dividends are “safe” and growing well, the collective volatility is low, and the portfolio is nicely diversified.

All in all, it was a great quarter, and it’s been a fine first 18 months for the IBP.

Do remember that this is not a recommendation that these stocks be bought or that this portfolio be replicated by any investor. The whole idea of this endeavor is to present portfolio-building concepts and interesting candidates for further research.

An article with my next IBP stock selection is scheduled to be published on Wednesday, July 10.