So this month, let’s bring Eastman Chemical into the Valuation Zone to see how its price stacks up against its value.

Eastman Chemical was spun off from Eastman Kodak in 1994.

For those who don’t remember, film photography was primarily based on chemistry.

George Eastman founded Eastman Chemical in 1920 in Kingsport, TN to solidify his supply lines for the burgeoning Kodak photography business.

Film photography, of course, has since collapsed.

Today, Eastman Kodak, which emerged from bankruptcy in 2013, still exists as a small company trying to make it in a few business areas.

Eastman Chemical, on the other hand, generates $10 B sales around the world. It has grown into a producer of chemicals, plastics, and fibers with uses in a myriad of industries. It owns and operates more than 50 manufacturing sites in seven counties. EMN employs about 14,500 people and has customers in more than 100 countries, with most of its sales overseas.

Before we get to valuation, here is Eastman’s Quality Snapshot. To create this, I use the following sources, which I have come to trust and respect over the years:

Eastman gets average and above-average grades across the board. On a 0-5 point scale for each metric, Eastman would get 18 out of 25 points. Overall, I would call Eastman Chemical a reliable investment-grade company.

That combination of yield and dividend growth puts Eastman Chemical in the good-yield, fast growth category of dividend growth stocks. A 5-year increase rate above 13% per year is quite fast for a stock yielding 3.5%. 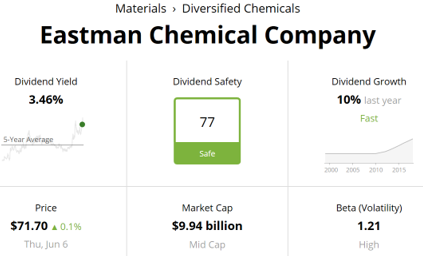 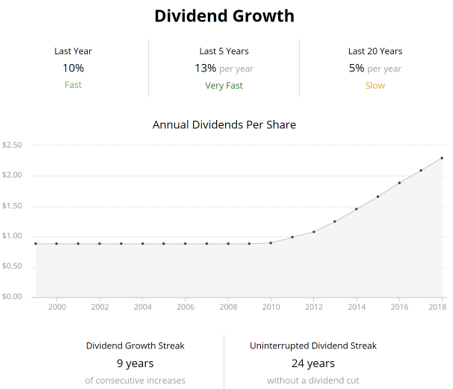 Eastman’s 20-year dividend growth rate, of course, is diminished by the fact that it simply paid a steady dividend for the first 11 of those years. 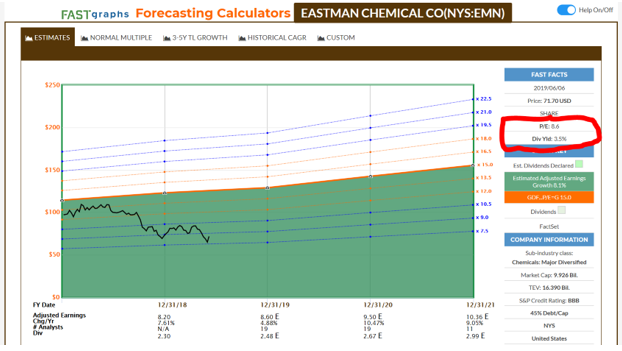 This graph reminds me of Rodney Dangerfield’s “I just don’t get no respect” routine.

The orange line corresponds to the reference P/E ratio of 15. The black line is Eastman’s price, which reflects its P/E, which is only 8.6.

Under this first method, Eastman is far undervalued. Here’s how I calculate the degree of undervaluation: Make a ratio out of the two P/Es.

That valuation ratio translates to Eastman being a whopping 43% undervalued.

To calculate EMN’s fair price, I divide its actual price by the valuation ratio:

I take that result somewhat with a grain of salt. I honestly wonder whether the company gets downrated in the market based on its “Eastman” name.

Valuations are assessments, not physical traits, so we want several points of view. We’ll get more from the following steps.

I use the stock’s 5-year average P/E ratio (circled) for this step. It’s shown by the blue line below. 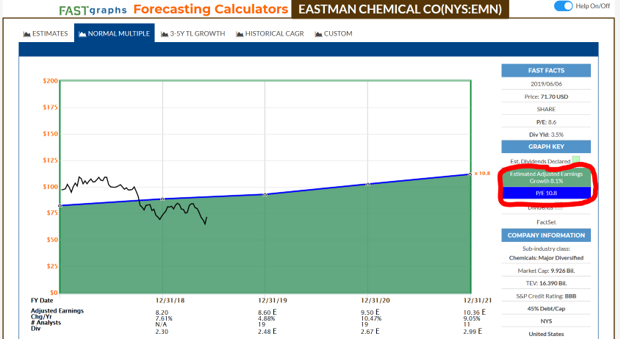 This method pulls the fair-value reference line closer to Eastman’s actual price. Eastman’s 5-year average P/E ratio is 10.8, which is low for a company with estimated earnings growth in the 8% per year range.

Eastman is still undervalued by this method. The formulas for the valuation ratio and fair price are the same as in the first step. Applying them, we get:

The next step is to consult Morningstar’s valuation of the stock. Morningstar ignores P/E and other familiar valuation ratios.

Instead, they use a discounted cash flow (DCF) model. Using conservative future projections, they discount all of the stock’s estimated future cash flows back to the present to arrive at a fair value estimate. (If you would like to learn more about how DCF works, check out this excellent explanation at moneychimp.)

Morningstar calculates a 25% undervaluation. Normally, a gap this wide would rate 5 stars, but they also consider that Eastman has a high uncertainty attached to its true value. Thus they give the stock 4 stars.

You may have noted in the first Simply Safe Dividends graph earlier that Eastman’s price beta (volatility) is high at 1.21 (21% more volatile than the S&P 500). This suggests that the market itself has trouble discerning Eastman’s true value.

If a stock is yielding more than its historical average, that suggests that it is a better value than usual, because you are “paying less” for the stock’s dividends.

With a well-valued stock, you can buy more shares with your money. Because dividends are paid per share, you will get more dividends for that money.

In Eastman’s case, it’s both. Eastman has been raising its dividend steadily for 9 years, at a pretty fast pace. Its market price hasn’t kept up. In fact, EMN’s price is lower now than it was 5 years ago.

That is illustrated in this graph of price vs. dividends. 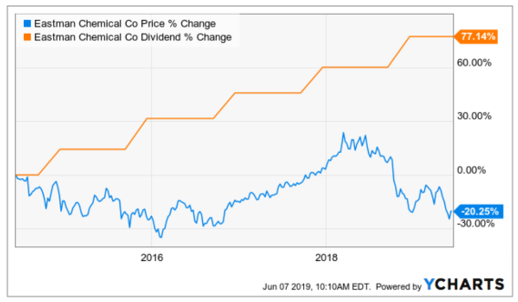 Eastman’s dividend payout has gone up 77% while its price has declined 20%.
That unusual price-dividend relationship has resulted in Eastman’s current yield being quite a bit higher than its 5-year average. 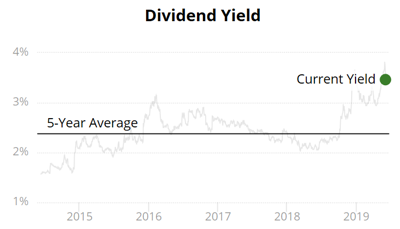 Eastman’s current yield of 3.5% is a whopping 45% higher than its average 5-year yield of 2.4%. That suggests that the stock is undervalued.

That would suggest 31% undervaluation. When I use this comparitive-yield method, I cut off the difference at 0.80, because this is an indirect method of measuring valuation, and I want to avoid extreme results.

There is a fairly wide disparity among the four methods, but they all agree that Eastman is undervalued.

The average of the four methods suggests a fair price of $100, compared to Eastman’s actual price of about $72.

That means that Eastman Chemical is selling at a 28% discount to fair value.

Some investors may be put off by its high beta (price volatility) and Morningstar’s stated uncertainty regarding the difficulty in valuing the company at all.

For further insight, please see this February report, in which my colleague Jason Fieber made Eastman Chemical his Undervalued Dividend Growth Stock of the Week. At that time, he calculated a fair price of about $91.

This is not a recommendation to buy Eastman Chemical. As always, perform your own due diligence. Check the company’s complete dividend record, business model, financial situation, and prospects for the future, as well as its effect on your portfolio’s diversification. And always be sure to consider how and whether any asset fits (or does not fit) your long-term investing goals.