President Tariff has struck again, this time threatening to impose taxes on imports from Mexico if that country doesn’t do more to “remedy” the “illegal immigration problem.”

The threat seemingly nullifies the very trade agreement with Mexico that Trump had been touting as one of his signature achievements.

Mexico president Andrés Manuel López Obrador, who had been a Trump supporter, was not such a big fan this time, saying: “America First is a fallacy.”

This latest Trump salvo against a long-time U.S. ally came just one day after special counsel Robert Mueller all but challenged Congress to begin impeachment proceedings against the president, and it also came on top of ratcheted-up rhetoric in Trump’s endless trade war with China.

Regardless of political views, folks wouldn’t be reading this article if they didn’t want to talk about investing in general and DTA’s Income Builder Portfolio in particular.

Well, on Friday, May 31, stocks were punished — especially those in sectors sensitive to tariffs against Mexico and China. The IBP holds several.

For example, Constellation Brands (STZ), the leading purveyor of Mexican beers, dropped 8.4% at one point before finishing the session down 5.8%.

For the IBP’s first June selection, it was tempting to add to the portfolio’s stake in STZ, MMM or AVGO, or to buy another company that has been trampled by Trump’s trade wars and therefore is on “sale.”

Instead, I have decided to go a different route, and add to our position in a low-volatility sector that has not been materially impacted by the president’s actions.

Come Tuesday, June 4, I will execute a purchase order on Daily Trade Alert’s behalf for about $1,000 worth of Dominion Energy (D), a regulated electric and gas utility that operates primarily in the southeastern United States.

Dominion’s share price has drifted downward recently — just enough to make it a little more attractive from a valuation perspective but not so much to make it look like a falling knife. 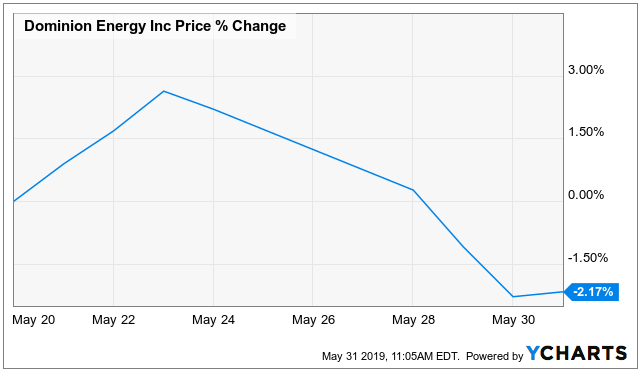 All of that is short-term stuff anyway. I wouldn’t be doubling down on Dominion if I didn’t consider it a quality company that will be a boon to the IBP for years to come.

The portfolio bought its first $1,000 worth of D on March 27, 2018, and the investing thesis I laid out a few days before then still stands today.

Dominion remains one of the world’s largest and most successful utilities, it still receives relatively friendly treatment from government regulators, and it keeps rewarding shareholders with generous dividends.

We believe a regulated utility can establish a wide economic moat if it operates in a constructive regulatory environment and it has a material share of earnings from nonutility businesses with sustainable competitive advantages. In our view, Dominion meets these criteria with the completion of the Cove Point LNG export facility and the Atlantic Coast Pipeline.

By 2023 and following the completion of the ACP, we estimate wide-moat nonutility and regulated transmission businesses will contribute roughly half of operating earnings. The balance will come from regulated gas and electric utilities with some of the most constructive regulation and attractive growth potential in the country.

Since our first purchase, Dominion has completed its acquisition of another southeastern utility, Scana, and has impressively handled what was then a controversial situation regarding that company’s nuclear operations.

D has expanded its use of Cove Point for its considerable natural gas operations. And along with its partners, Duke Energy (DUK) and Southern (SO), it has continued to make progress — albeit slowly due to political and legal wranglings — on the Atlantic Coast Pipeline. 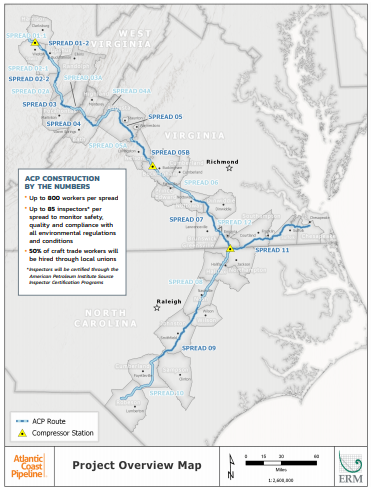 For all of this, Morningstar has bestowed its highest “stewardship” rating upon Dominion management:  Exemplary.

In addition, Value Line has assigned Dominion a solid “Safety” score of 2 (on a 1-to-5 scale), and Standard & Poor’s gives the utility an investment-grade BBB+ credit rating.

During its most recent quarterly earnings presentation, May 3, the company restated expectations for EPS growth as high as 8.6% in 2019. Using the midpoint of Dominion’s range, $4.23, that would be 4.4% year-over-year earnings growth. 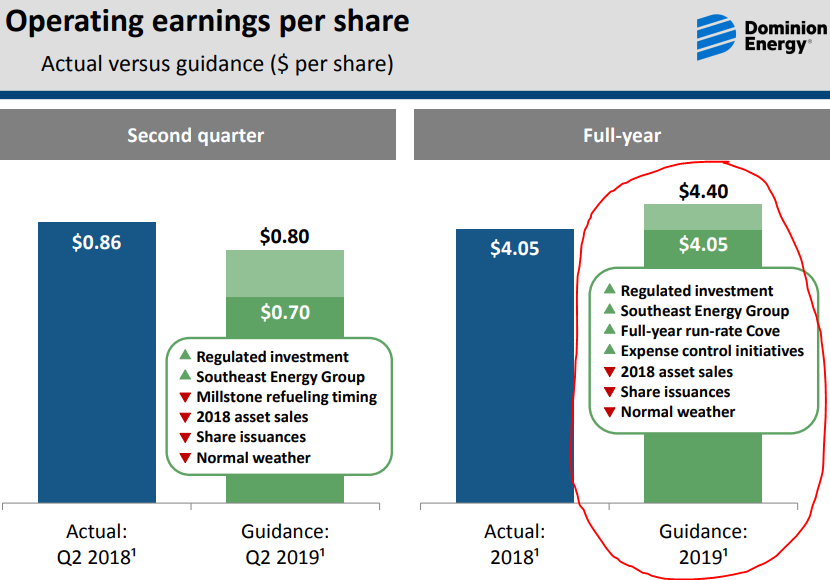 At nearly 5%, Dominion Energy is one of the highest-yielding utilities. And of the IBP’s 25 holdings, its yield trails only those of AT&T (T), Altria (MO) and AbbVie (ABBV). 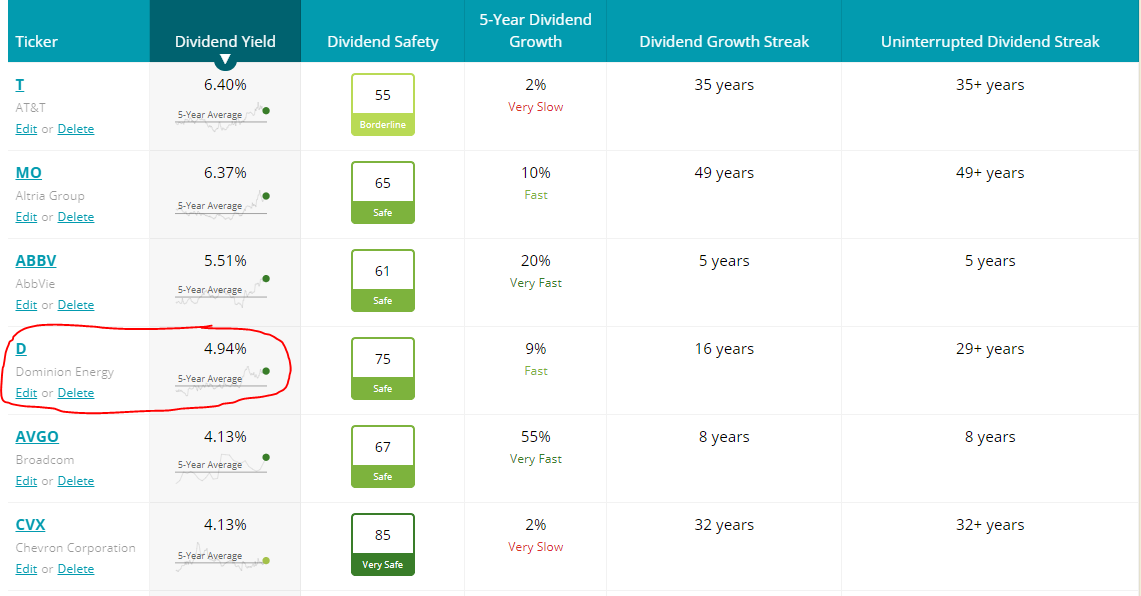 A few other notable facts from the above Simply Safe Dividends chart of Income Builder Portfolio positions:

As for that last point …

The company has increased its dividend an average of about 8% since 2008. In doing so, however, it has driven its EPS payout ratio up near 90%, its highest ever and uncomfortably high for a utility. 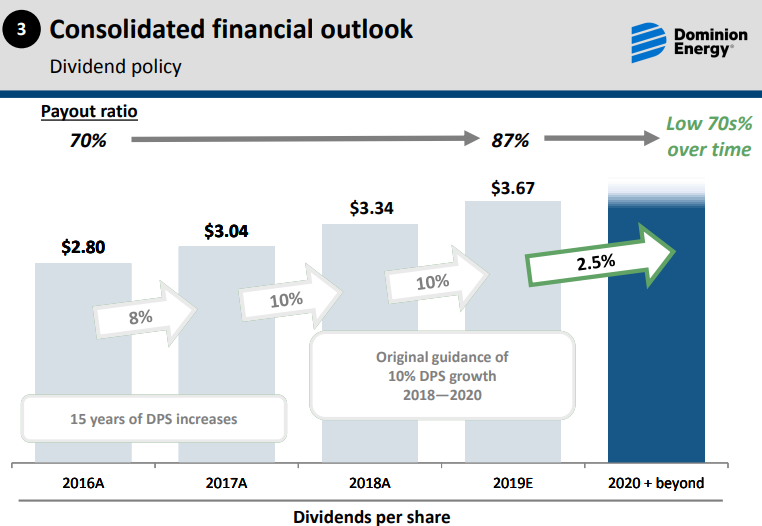 So as you can see from the dark blue bar on the above slide from the March 25 investor presentation, management is projecting a dividend raise of only about 2.5% for 2020.

Beyond that, D has signaled that the company will continue with low-single-digit hikes until the payout ratio can fall more in line with the industry average. 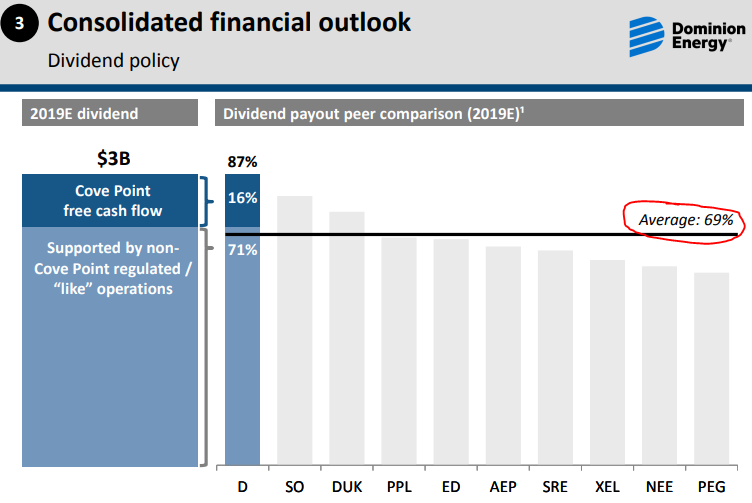 Five years from now, D’s average long-term dividend growth still will have been outstanding for a utility, and the yield will remain excellent. Notably, management has never once said a dividend freeze or cut is a possibility.

Most importantly, by maneuvering to lower the payout ratio, Dominion is showing once again that it will do what’s necessary to operate efficiently and successfully for decades to come.

I do not usually pay much attention to a company’s beta — its measure of volatility compared to the overall market — but I will admit that, with trade wars raging and the market getting roiled, Dominion’s very low 0.25 beta was attractive to me at this time.

That does not necessarily mean I will avoid adding higher-beta or beaten-down stocks to the Income Builder Portfolio in the future. For this selection, however, there’s something calming about building up our investment in a high-quality company that pays little attention to the noise booming in the distance.

My article detailing our Dominion purchase, along with updated valuation information, will be published Wednesday, June 5.