When an investor owns shares of a company and then adds more at a lower price, it’s sometimes said that he or she is “averaging down.” Conversely, if the price has moved higher, the investor has “averaged up.”

Averaging down would seem the preferred situation: The investor liked the company at $100, so obviously he or she should love it at $90.

However, there is a lot to be said for averaging up, too.

Doing so could be one sign that the investor selected a quality company in the first place, one that has performed well since the initial buy.

That’s just what we did within DTA’s Income Builder Portfolio on Tuesday, May 21, when I executed a purchase order on Daily Trade Alert’s behalf for 3 shares of Lockheed Martin (LMT) at $343.03 each. 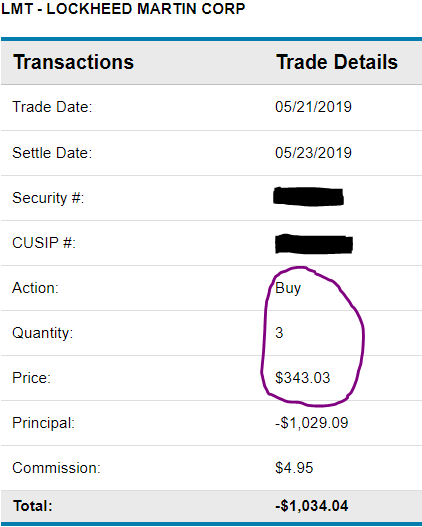 If one wonders why I was willing to pay about 10% more for Lockheed Martin than we did about a year ago ($311.55), one must remember the Warren Buffett quote:

While I will go into more specifics about this company’s valuation later, FAST Graphs helps illustrate what Buffett’s quote means — and helps explain why I decided to get more LMT now.

Here is one of the graphs I used in my article of May 5, 2018, the day after we bought LMT for the first time: 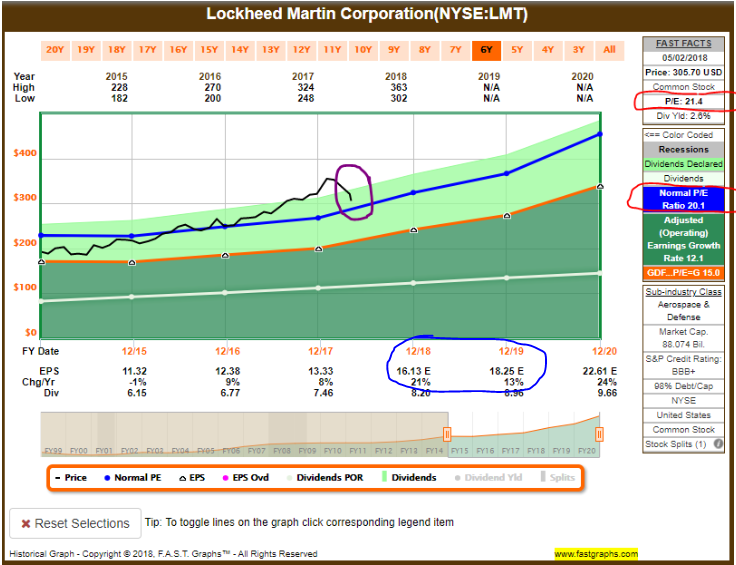 The red-circled areas show that the “blended” price/earnings ratio was 21.4 compared to the 20.1 norm, and the purple-circled area shows the black price line was higher than the blue normal valuation line, indicating slight overvaluation. 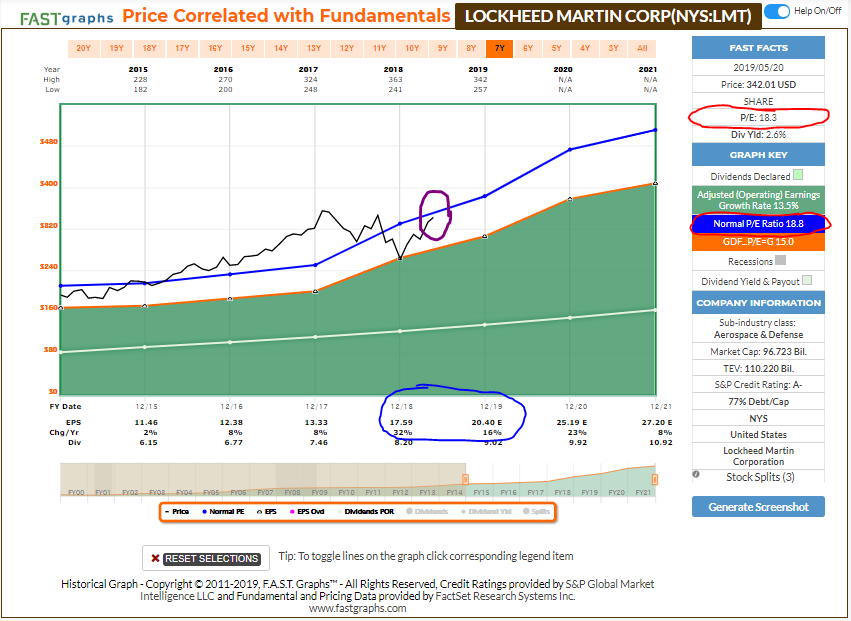 In the above illustration, the blended P/E ratio (18.3) was lower than the norm (18.8), indicating slight undervaluation.

As it turned out, earnings per share were higher in 2018 than anticipated, and Lockheed Martin’s EPS guidance for 2019 is much higher now than it was a year ago. In both images, that data is circled in blue.

So even though LMT’s price was 10% higher for the IBP’s second buy, the company was actually a better value — compared to its own history. Given the quality of the world’s largest defense contractor, as well as its future prospects, I thought paying $343 per share was A-OK.

And hey, if EPS is about $25 per share in 2020, as is currently projected, this will have ended up being a great deal at less than 14 times earnings.

Nine of the 25 holdings in the Income Builder Portfolio have been purchased twice each, as the following table shows:

The lesson isn’t “avoid averaging down,” or “always average up,” or any other absolute. I abhor investing absolutes, as every situation is unique and should be looked upon that way.

Sure, I like getting a “deal” on a great company when it’s been beaten down for some reason, but if all I ever did was average down, I would never be able to build up my positions in the best-performing investments.

In an article I wrote last August featuring my investments in Microsoft (MSFT), just about every purchase I made was at a higher price than one before … but every single buy (including dividend reinvestments) has resulted in outstanding gains.

Meanwhile, when I was able to take advantage of dips on quality companies such as Chevron (CVX), Nike (NKE) and McDonald’s (MCD), I was happy to do that, too.

As I said in my previous article, there are many reasons I selected Lockheed Martin for the IBP … and the generous, growing dividend is high on the list. 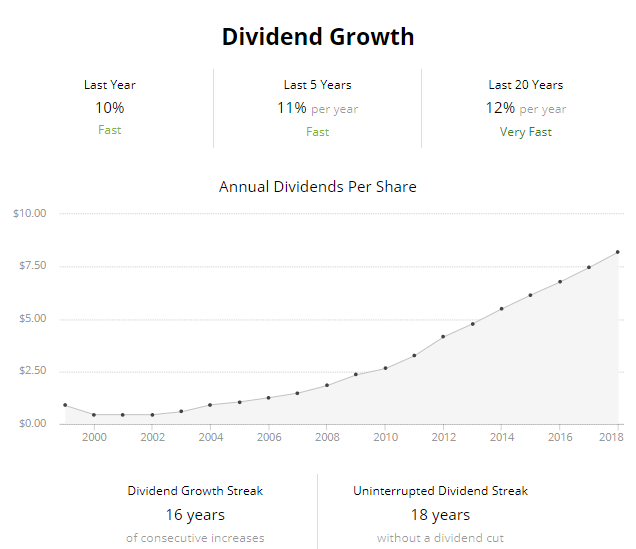 That will be reinvested right back into LMT stock, as per the IBP Business Plan, adding about .039 of a share (if the stock price is still at its current level in late June).

Then, three months later, the new share total of 6.1238 would generate a $13.47 dividend, which in turn will buy more LMT shares.

And it only gets better after that, as the company is expected to announce its next dividend hike in the fall. If form holds, the raise will be at least 10% again.

On and on it will go, for LMT and all of our other holdings, which is why we named this endeavor what we did.

By and large, analysts really like Lockheed Martin, as the following graphic from Thomson Reuters (via Fidelity.com) illustrates. 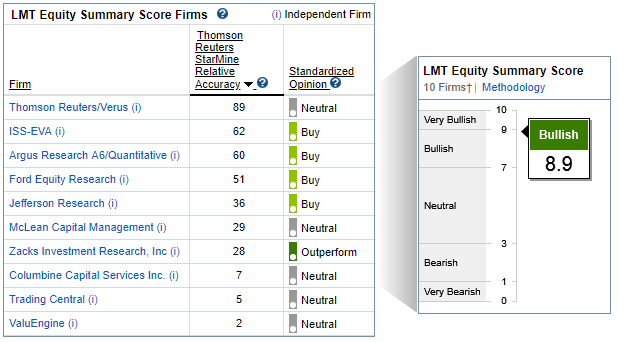 Value Line’s 18-month target price (purple-circled area) is a little under $400, while the 3-5 year range (blue) is as much as $485, which is why VL has included Lockheed Martin in its model portfolio of “Stocks For Income And Potential Price Appreciation.”

According to finviz.com, the mean analyst target price for LMT is $366.56, about 7% higher than our most recent purchase. One reason for the support: Lockheed’s extremely attractive PEG ratio of about 1.2.

ValuEngine says the current fair value for LMT is $372.60.

The FAST Graphs image I used earlier in the article, showing LMT to be fairly valued relative to its history, was based on only a five-year review. If one stretches out the time frame to include the Great Recession, the stock looks somewhat overvalued. 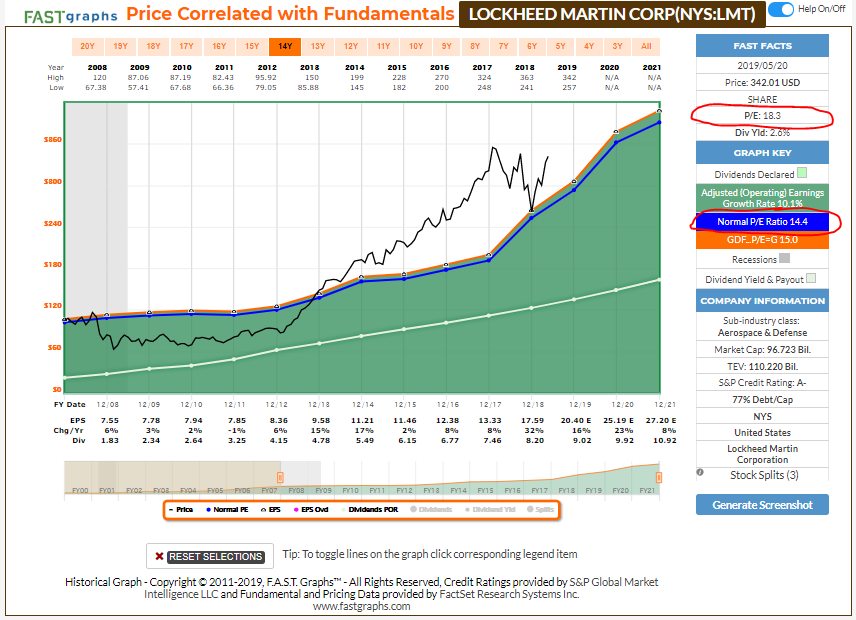 There were times in the last several months that we could have “averaged down” on LMT — adding to our position at a lower price than we paid for our initial stake — but we instead were choosing other companies, most of which also were attractively valued.

As is the case with many investors, we have a limited amount of money available each month to buy stocks for the Income Builder Portfolio. Indeed, the whole idea of this project was to put together a reliable, growing income stream through the real-time acquisition of high-quality companies.

Although we certainly hope to take advantage of pullbacks to bag some bargains over the next several years, we also expect to have dozens and dozens of opportunities to “average up.”

That will mean the IBP’s investments are performing well, just as Lockheed Martin has done.