War! Huh! What is it good for? Absolutely nothin’! So sang Edwin Starr about a half-century ago (and many others since, including Bruce Springsteen). 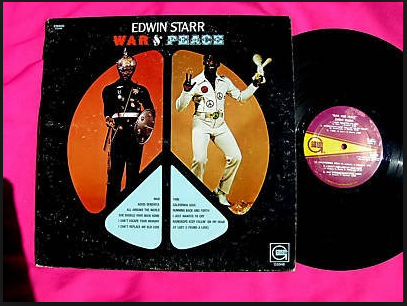 The pacifist in me believes he was right, but the investor in me is pretty sure he was wrong.

War — and the practice, threat and deterrence of it — has been worth a whole lot more than absolutely nothin’ for shareholders of Lockheed Martin (LMT) and similar military-defense/aerospace companies.

When I wrote about LMT last year, Donald Trump was threatening to rain “fire and fury” down on North Korea; although the sides have since tried to make nice, the rogue nation’s leader, Kim Jong-un, is taunting Trump again.

More recently, Iran is aggrieved by Trump’s sanctions against the country (stemming from his refusal to honor a multinational agreement), so leaders of the long-time U.S. adversary are warning that they will aggressively pursue nukes — leading to a fresh round of saber-rattling.

As a result, the USS Abraham Lincoln aircraft carrier, loaded with fighter jets, has been dispatched to the region, and The New York Times has reported that some 120,000 U.S. troops could be deployed.

The president’s knee-jerk response to the report was classic Trump:

I think it’s fake news, OK? Now, would I do that? Absolutely. But we have not planned for that. Hopefully we’re not going to have to plan for that. And if we did that, we’d send a hell of a lot more troops than that.

In the last few days, Trump has assumed the very uncharacteristic role of voice of reason, trying to settle down the warmongers in his administration; after all, he campaigned against protracted wars, regime-change attempts and nation-building operations.

Without going any further down the political rabbit hole, I just wanted to present another illustration of why war is big business — and why we are about to add to the Lockheed Martin position in DTA’s Income Builder Portfolio.

Come Tuesday, May 21, I will execute an order on Daily Trade Alert’s behalf for about $1,000 worth of stock in the world’s largest defense contractor.

The purchase will roughly double the IBP’s current position (3.0848 shares) and will make LMT one of the 25-stock portfolio’s larger holdings by both market value and income produced.

LMT Is The Bomb!

Since we first bought LMT on May 4, 2018, some things have changed (for the better) but much has stayed the same.

The company is still a big supplier to the Pentagon and also to foreign governments, it is still innovating, and it is still producing products for which politicians have an insatiable appetite.

(Some products from the company’s Aeronautics division. Photo from lockheedmartin.com)

Lockheed Martin’s long-time success compelled me to select the stock for the IBP about 12 months ago, and the past year has been even better for the company and its shareholders.

As the following three slides from the April 23 earnings presentation show, LMT saw significant year-over-year gains in sales and profits for all four of its divisions, leading to a remarkable 49% overall improvement in earnings per share. 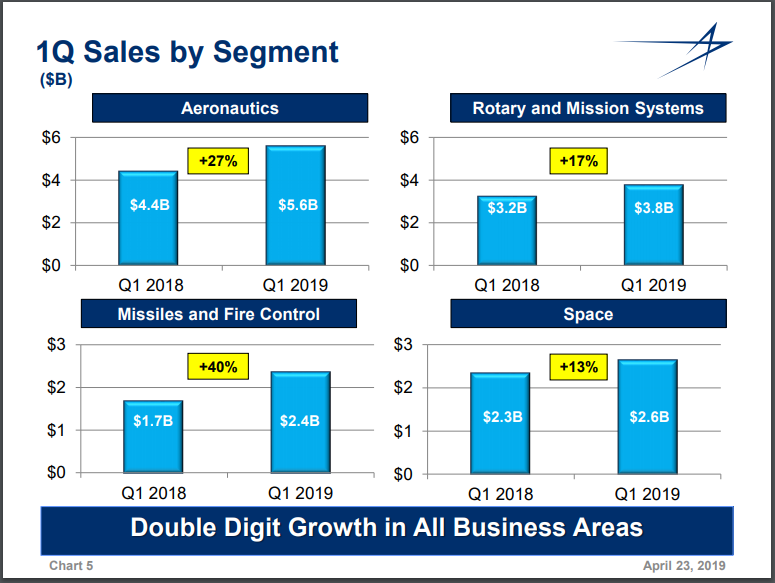 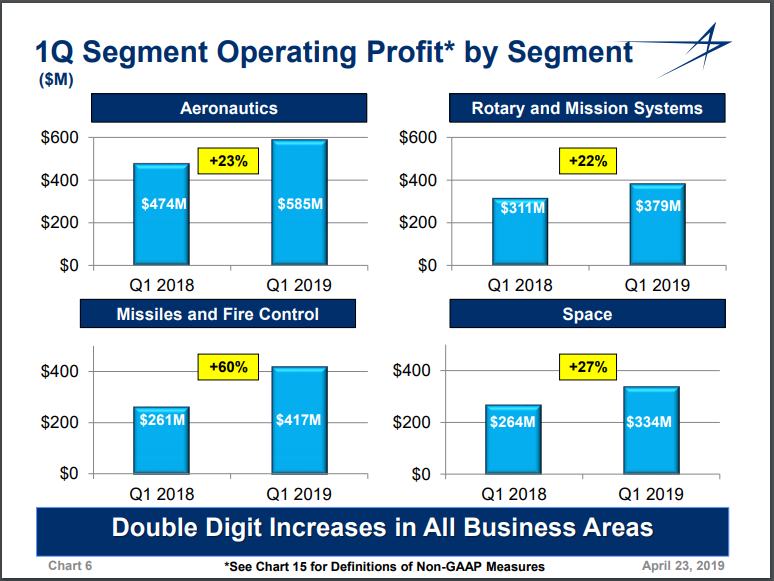 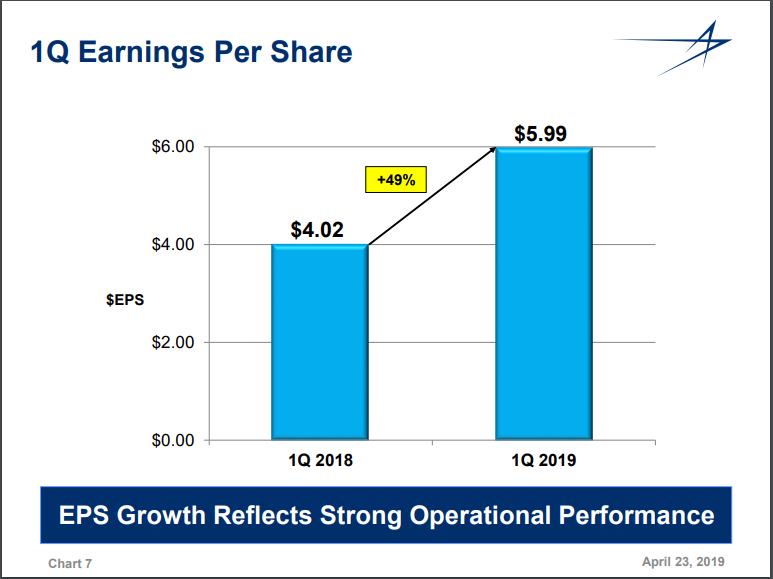 The following image shows that even though Lockheed Martin’s price/earnings ratio is well below the norms for both its industry and its sector, the company’s EPS growth has far outperformed its peers.

Because investing is more about the future than the past, I’m excited about the company’s full-year guidance for 2019. 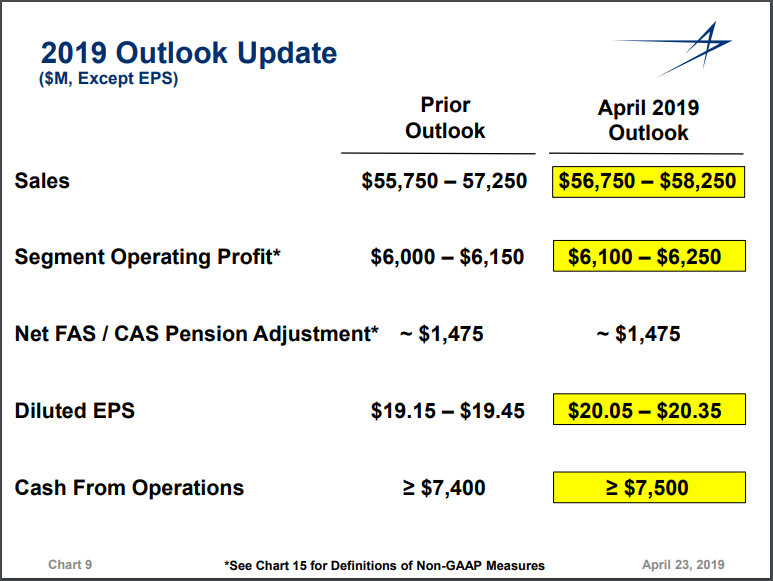 The slide above shows a large bump in EPS guidance from just 3 months earlier, while the slide below indicates that the company expects to grow sales in every segment at an even better clip than it had previously thought. 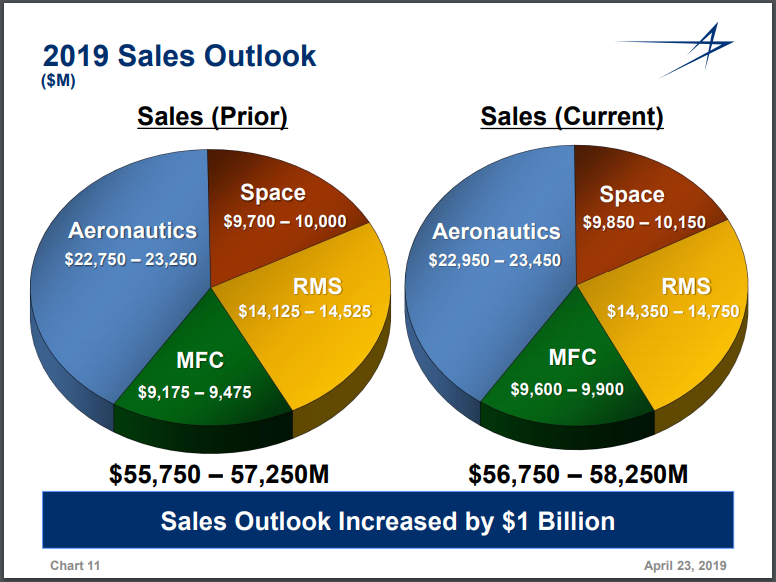 Dividend Growth Investing is the primary strategy I use in putting together the Income Builder Portfolio, so naturally one of the main appeals of Lockheed Martin is its long commitment to increasing its payout to shareholders.

For 16 consecutive years, LMT has raised its dividend, and most of the hikes have been by double-digit percentages.

Most recently, the quarterly dividend was boosted 10% from $2 per share to $2.20, and I’ll be surprised if another hefty raise isn’t announced in about four months.

Citing excellent earnings, good cash flow and reasonable debt levels, Simply Safe Dividends gives LMT a “safety” rating of 81 (on a 1-100 scale); that is slightly lower than the 85 of a year ago, but still within the “Very Safe” range.

The following FAST Graphs image shows that although LMT’s operating cash flow (orange line) fluctuates quite a bit, it nevertheless is always able to cover the dividend (white line). Most years, it does so rather easily, which explains all of those the double-digit dividend hikes.

Given that so many countries are angry at other countries, one would think this industry is always a good one to invest in — and it almost always is.

Nevertheless, there are risks to any business, even one as strong as LMT.

For example, the Trump trade war with China is affecting most multinational corporations, particularly cyclical industrials.

There have been complaints from politicians that Lockheed is charging too much for its products.

And some fear that a loss by Trump in the 2020 election could signal less U.S. investment in defense products.

Though that latter point might end up being true, this is an undeniable fact: During “peace-loving” Democrat Barack Obama’s eight years as president, Lockheed Martin’s EPS grew 58%, its dividend more than tripled and LMT stock far outgained the S&P 500 Index.

It seems that regardless of which political party controls the White House and Congress, the Pentagon loves buying machines of mass destruction.

I considered several other companies for this purchase, including industry peers such as Raytheon (RTN), Northrop Grumman (NOC), Boeing (BA) and General Dynamics (GD).

However, none has performed any better than LMT, none has a stronger outlook, and none can match Lockheed’s 2.6% yield.

So why not stick with the company that I already decided was worthy of inclusion of the Income Builder Portfolio — one with a spectacular “Financial Sonar” from Jefferson Research? 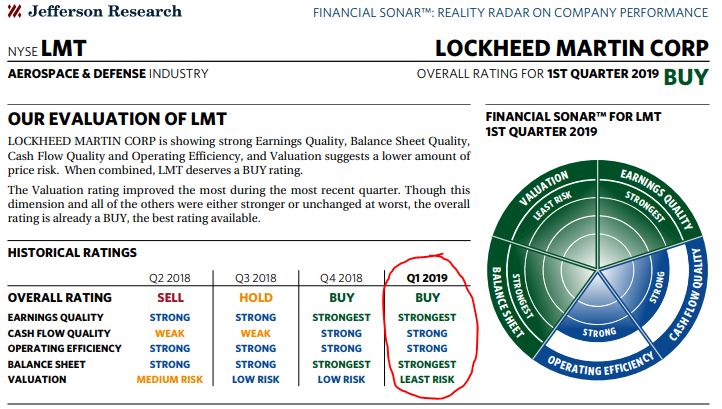 I also was tempted to add to the IBP’s stake in 3M (MMM), which continues to fall hard after a disappointing earnings report, but I decided to go with a company that is soaring like a Lockheed Martin Trident II D5 ballistic missile rather than one struggling to climb out of a hole.

My next article, to be published Wednesday, May 22, will include details of our LMT purchase and will analyze the company’s valuation metrics.

For more on Lockheed Martin, check out my DTA colleague Dave Van Knapp’s article from earlier this year: HERE.