Earnings go up … dividends go up … total return goes up.

No wonder I’m so up on NextEra Energy (NEE), a company that’s easy for a shareholder to appreciate.

The world’s largest utility put on a presentation for its investors on May 6, and the following slide perfectly illustrates what I’m talking about: 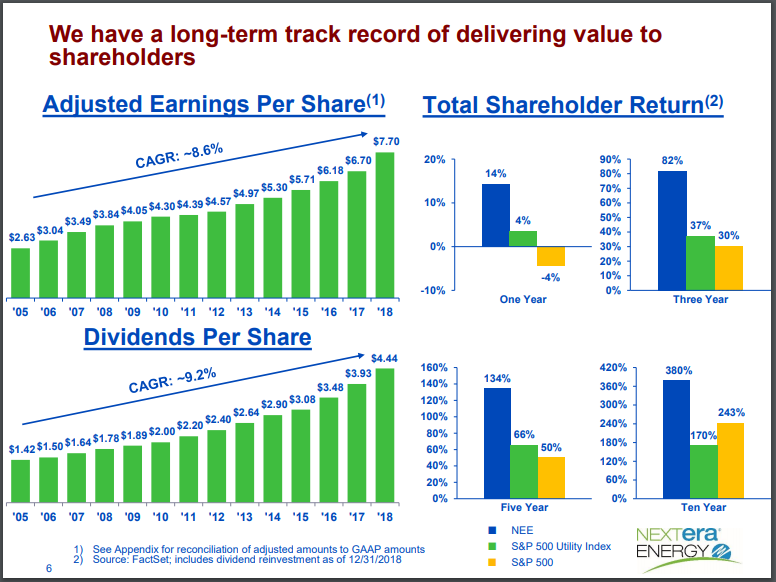 Such consistent all-around performance was a major factor in the decision to buy NEE for DTA’s Income Builder Portfolio in March 2018, and it’s a big reason why we have chosen to nearly double the IBP’s stake in the company.

On Tuesday, May 14, I executed a purchase order on Daily Trade Alert’s behalf for 5 shares of NextEra Energy at $195.31 apiece. 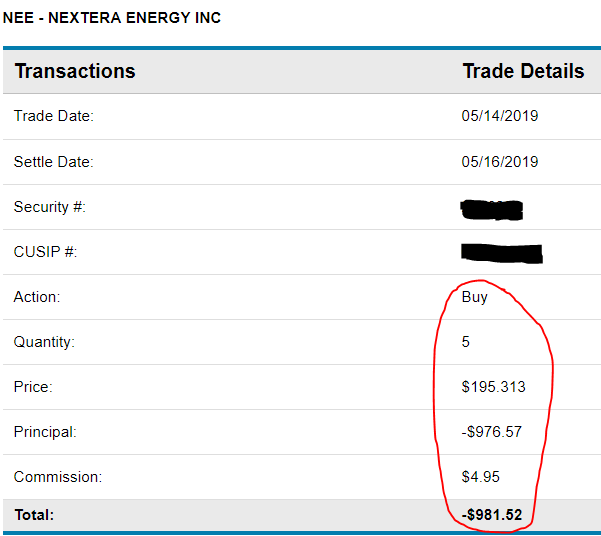 The IBP now has 11.1588 shares of NEE, the eighth company we have bought twice since launching this project 16 months ago.

Not surprisingly, those eight “double dippers” have the highest market values of the 25 companies in the portfolio.

After selecting a stock for the IBP, I usually write two articles: the first with relevant data about the company’s operations; the second loaded with information about valuation.

I flipped the script this time, writing primarily about valuation in my previous piece.

First, there are the earnings, which definitely reinforce the up-up-up theme expressed in this article’s first paragraph.

The following FAST Graphs illustration shows a company that has gone through two decades without ever having a year-over-year downturn in earnings — an unusual, impressive accomplishment. 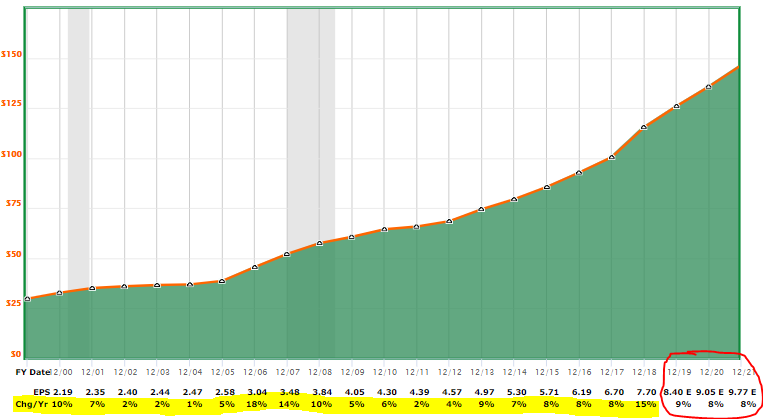 Because we always should look forward when choosing investments, I circled NextEra’s anticipated earnings growth for the next several years.

During its most recent quarterly report, the company highlighted EPS expectations through 2021, including anticipated contributions from recent Florida acquisitions such as Gulf Power and Florida City Gas. 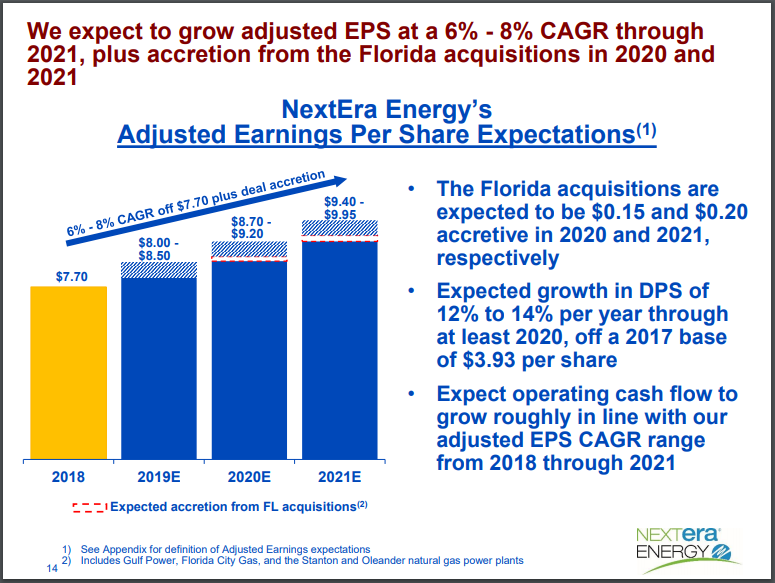 Following is some other information about NEE’s fundamentals. According to Simply Safe Dividends, the company’s debt level is acceptable, but return on equity and return on capital are not quite as robust as normal.

“Quality” is a word investors throw around a lot, but it truly applies to NextEra.

On May 13, Barron’s selected NextEra as one of “7 Dividend Stocks for Volatile Times Ahead,” citing NEE’s growing electric utility and clean-energy businesses, as well a dividend that “should continue to climb.”

NextEra in February announced it was increasing its payout to shareholders for the 25th consecutive year, joining Consolidated Edison (ED) as the only utilities on the prestigious Dividend Aristocrats list.

That 67% increase in less than a decade would be outstanding for most companies, but it’s almost unheard of for a utility. Con Ed, for example, has averaged 2% dividend growth over the last 10 years.

Such growth helps make up for NEE’s 2.6% yield, relatively low for an electric utility.

Come mid-June, NextEra Energy’s quarterly dividend of $1.25 will result in a payment of $13.95 to the IBP. Because the portfolio’s Business Plan mandates automatic reinvestment, about .07 of a share will be added to our position.

Then, three months later, the new share total (about 11.23) will generate approximately $14.04 of income, which again will be reinvested into NEE shares.

Zap! That’s an electric way to grow our income stream … and its why we named this project what we did.

In my previous article, I used numerous sources to show that NEE appears fairly valued at best — and perhaps even overvalued.

Nevertheless, many market-watchers remain bullish on the company, as indicated by the following Thomson Reuters survey of 16 industry analysts.

Jacob Kilstein of Argus raised his 12-month target on NEE to $210, saying the company’s “premium valuation is warranted” due to its quality and performance.

Among those who also expect NextEra to outperform during the next year are analysts from CFRA, Credit Suisse, Ford Equity Research, Schwab and ValuEngine. 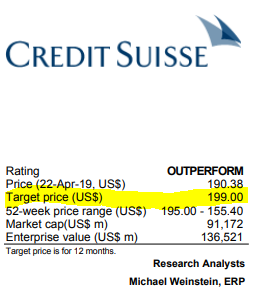 With Donald Trump ramping up his trade war with China, the S&P 500 Index was down 2.4% on Monday, March 13. Our Income Builder Portfolio was not immune, falling 1.6%.

Although such a showing gives me confidence that NEE will continue to do well over time in both good and bad markets, it also means the stock’s price advanced strongly right before we wanted to buy it.

That happens sometimes. The exact opposite occurred with some of my other IBP selections, the timing working out just right for us to get relative bargains.

Either way, when investing a relatively small amount of money (as we do twice a month in the IBP), I don’t sweat short-term market movements — especially when buying a high-quality company such as NextEra Energy.

Dividend Growth Investing is a long-term strategy, and I feel good about making this newly minted Aristocrat one of the Income Builder Portfolio’s largest positions.