Five times in the last five years I have bought shares of a company that many pundits, analysts and other “experts” considered quite overvalued. Nevertheless, my total return for the position has crushed the overall market at every turn.

That company is NextEra Energy (NEE) … and, wouldn’t you know it, I’m choosing the “too expensive” Florida-based utility yet again.

Come Tuesday, May 14, I will execute a purchase order for about $1,000 worth of NEE on Daily Trade Alert’s behalf for our Income Builder Portfolio.

It will be the second time we will have bought a stake in NextEra for the IBP, the first occurring on March 13, 2018. 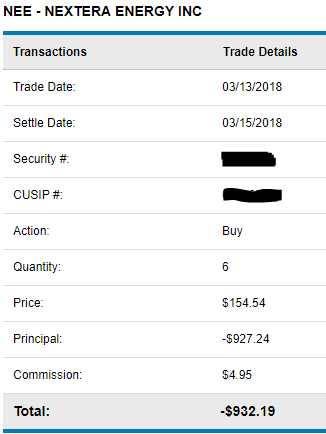 As you can see, we paid $932.19 (including commission) for that 6-share stake. Having added partial shares via dividend reinvestment every three months since then, the IBP now owns 6.1588 shares.

That’s an outstanding 14-month gain for any company, especially given that the S&P 500 Index (SPY) is up only about 6% over that span. But for a “boring” utility such as NEE — not to mention one that was “overvalued” — it’s truly impressive.

DTA allocates $2,000 per month for two purchases for our real-money, real-time, Dividend Growth Investing portfolio, and a lot goes into my decision-making process each time.

This time, I considered doubling down on our struggling 3M (MMM) or Amgen (AMGN) positions, but decided to hold off due to the political climate surrounding their industries.

(Donald Trump’s trade war with China is hurting multinational industrials such as 3M, and politicians of all stripes are clamoring for lower drug prices from companies like Amgen.)

I also thought about adding to our stake in Dominion Energy (D) — a utility that appears more fairly valued than NextEra.

However, my DTA colleague Dave Van Knapp just wrote about Dominion, and I didn’t want to parrot his thorough report.

Finally, I considered a few other utilities before deciding that I might as well stick with one we already own — and one of the very best — in NextEra Energy.

Normally, after choosing a company for the IBP, I first write about how wonderful that business is. Then, after making the buy a few days later, I go into a lot of valuation information.

On this occasion, I am going to do the opposite.

For one thing, I opened the door to a discussion about NEE’s valuation in the first few paragraphs of this article.

For another, I believe valuation, in general, is an important topic with a lot more nuance than some might think, and I thought a look at my history with NEE might provide an interesting way to illustrate that.

Buying A Company I NEEded

In addition to the 6-share stake that was bought for the IBP last year, I have executed four trades for NextEra over the years.

The first came on Dec. 16, 2014, when I used my own money to fund a portfolio of 50 companies as part of a project called the Dividend Growth 50. 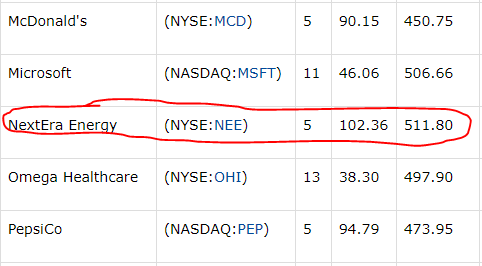 At the time, NEE was trading at about 20 times earnings; that’s pricey for many stocks, and especially so for a utility.

Despite that, the value of that NEE position has more than doubled, as the following image from the brokerage that houses the DG50 shows.

My three other NextEra buys were made within my Roth IRA between July 2017 and September 2018.

NEE’s forward P/E ratio when I made the first of those three purchases was about 20, and it only went up from there for the two subsequent buys. It was at about 22 for the third.

As every investor knows, we have been in a bull market for more than 10 years now, with the S&P 500 setting record highs. There have been pullbacks along the way, of course, but each has been followed by a new period of growth, and a new high.

And yet our boring old utility, NextEra Energy, has consistently outperformed Mr. Market since I started accumulating it for various accounts.

Did I say “consistently outperformed”? I meant “crushed” — with a total return more than twice as robust on a percentage basis.

And as the following FAST Graphs shows, it’s not just that I’ve been lucky with the timing of my NextEra buys. Over the last two decades, NEE has outgained SPY more than 4-to-1, and it’s done so in good times and bad. 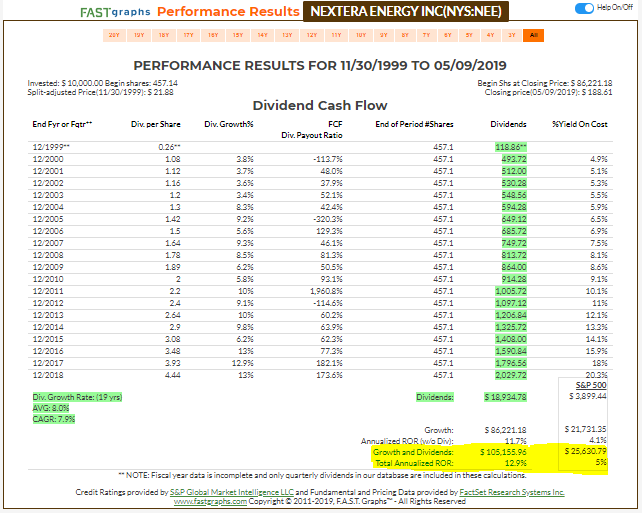 I have only one problem with NextEra Energy stock, and it’s a biggie: I don’t own enough of it!

FAST Graphs indicates that NEE seems quite expensive now relative to its own history.

Even if one looks at only a relative short time frame, after NextEra’s quality started drawing more and more investing interest, the company is historically overvalued, with a 23.7 “blended P/E” vs. a norm of 20. 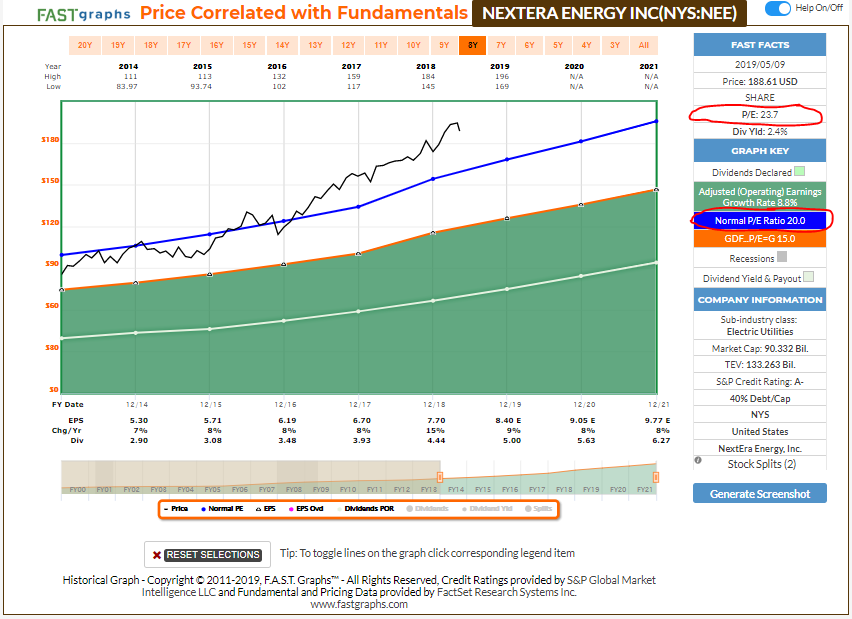 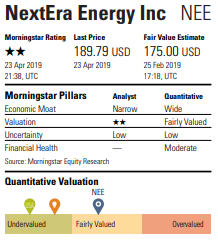 Morningstar is using a 19.3 P/E ratio to establish fair value even though NextEra’s ratio rarely has been below 20 for years. When the IBP added NEE 14 months ago, Morningstar said NEE was overvalued then, too, with a FVE of $150.

No knock on Morningstar, a service I use and hold in high regard, but sometimes its analysts seem to be overly conservative about valuations, especially for high-quality companies that nearly always trade at premiums.

I mean, Visa (V), Amazon (AMZN) and Costco (COST) have been overvalued for years and years and years … but ask long-time shareholders if they are the least bit disappointed that they paid “too much” for those companies 10 years ago. 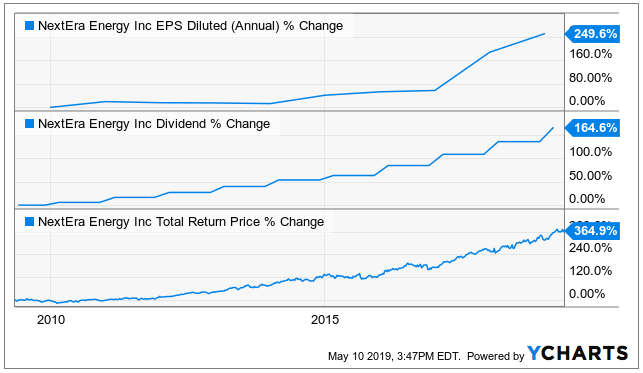 I wrote about those positives when I first chose NEE for the Income Builder Portfolio 14 months ago, and I will update them in my next article — which will be published on Wednesday, May 15, a day after  I execute the purchase order.

Investors who like to buy everything “on sale” might not be interested in NEE at this price, and that’s A-OK. Each of us must have a plan and must feel comfortable with what he or she is buying.

For DGI practitioners who are methodically building a portfolio (and an income stream) with smaller buys — which is exactly what this endeavor is about — getting a bargain on every single purchase might not be as crucial.

So far in my experience, there haven’t been too many bad times to buy shares of NextEra Energy.

Nothing is guaranteed, however, and for all anybody knows a “reversion to mean” for NEE — or maybe even the entire market — is in the offing. Therefore, I strongly urge every investor to conduct thorough due diligence and to fully understand his or her risk tolerance and goals.