What is the likelihood that universal health care will become the law of our land in the next decade?

How about Medicare For All, or a Medicare buy-in option?

Do you believe the Affordable Care Act will be strengthened, weakened, repealed/replaced or completely scrapped?

Will Amazon and other e-commerce companies be major players in the future of health care?

If your answer to any or all of the above questions is, “I don’t know!” … welcome to the club. 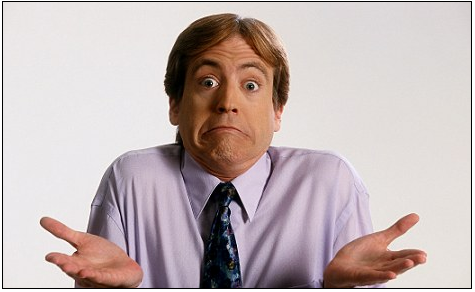 Politicians of all stripes claim to have answers, but they really don’t know, either.

I don’t want to make this a political article, so I’ll avoid going into who is promising what, but health care already is a hot-button topic as we head into the 2020 U.S. election, and it will continue to be a much discussed, often divisive subject for decades to come.

We investors must deal with all of the above as we try to navigate the health care landscape.

If you think universal health care is inevitable, you might not want to invest in insurance companies.

If you believe politicians will rein in drug prices, pharmaceutical and biotech stocks might not be for you. And so on.

On the other hand, maybe you simply assume our elected officials will not be able to enact legislation that will dramatically alter business as usual for drug and medical-device companies, the insurance industry, hospitals, and related entities.

That’s pretty much where I stand as an investor: I deal with what I know is true today and assess as fairly low the probability that significant change will come tomorrow.

Johnson & Johnson (JNJ), a conglomerate with major stakes in both the drug and medical equipment industries (as well as consumer goods such as Band-Aids and baby products), is my largest individual-stock investment.

J&J also is one of the largest holdings in the real-money portfolio I am putting together for Daily Trade Alert, and I recently decided to double our stake in the company.

Due primarily to political threats, promises and upheaval, there was a pullback not long ago in the prices of many health care stocks, and I often like to take advantage of such investing opportunities. 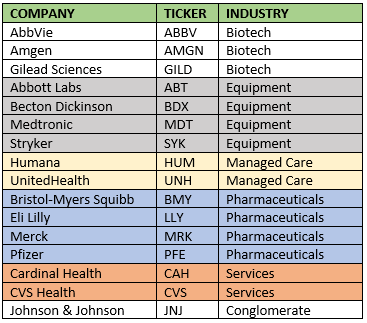 There are hundreds of publicly traded companies in the Health Care sector, and the table above shows 16 of them in five different industries.

I selected them because either they are part of the IBP, they are on our watch list, or they are companies I thought investors might find to be interesting candidates for further research.

The following table is filled with information regarding the valuation, dividends and quality of the companies.

According to the Morningstar Investment Research Center, CVS Health (CVS) is the best bargain of the stocks listed, as it is trading at a 42% discount to what its analysts believe is fair value (light blue shading).

CVS used to be only a drugstore chain that competed with the likes of Walgreens (WBA), but it has branched out into many other areas of health care, including clinics and pharmacy benefits management (PBM).

Late last year, CVS acquired insurance behemoth Aetna in a $69 billion deal that has significantly increased the company’s debt, leading the company to freeze its dividend.

I have owned CVS for a few years, and it has been one of my biggest laggards. A disappointing earnings report in February sent prices plummeting again (blue arrow in graphic below).

PBMs such as CVS and Cardinal Health (CAH) have been in Congress’ crosshairs, and there also have been rumors that Amazon (AMZN) might get into the business. As a result, the day’s headlines often result in big price swings.

Like CVS, Cardinal’s stock price has plummeted — resulting in its dividend yield climbing to 4%, well over its 5-year average or 2.3% (orange shading in the table).

This is a sign of undervaluation … and also of investors having little confidence in an underperforming company that faces headwinds in a challenging industry.

Those investing in CAH or CVS are betting on big comebacks, that’s for sure.

Bristol-Myers Squibb (BMY), best known for cancer medication Opdivo and blood clot preventer Eliquis, has a forward P/E ratio of 11 — quite a bargain compared to its 5-year average P/E of 21.4 (light green shading in table).

Like the other pharmaceutical companies I am profiling here — Eli Lilly (LLY), Merck (MRK) and Pfizer — BMY receives a “wide moat” designation from Morningstar for having competitive economic advantages (gray shading in table), as well as an A++ Financial Strength rating from Value Line (light orange).

Nevertheless, it’s been a struggle for BMY compared to its peers the last few years, both in price performance and dividend growth. 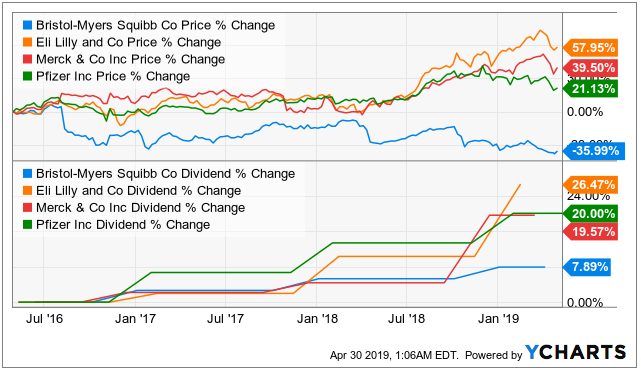 Pfizer, Merck and Eli Lilly each presented first-quarter 2019 earnings figures on Tuesday, April 30; PFE and MRK had strong reports, LLY not so much.

At first blush, Pfizer seems to offer the best combination of yield, dividend growth, quality and valuation, but I haven’t taken a real deep dive into it yet. Obviously, I would do just that before seriously considering it for the Income Builder Portfolio.

UnitedHealth was the company I came closest to selecting for the IBP before going with a second shot of JNJ.

UNH recently delivered a strong earnings report, and it has grown its dividend aggressively, as demonstrated by both its most recent raise of 20% and its 5-year average of 26% (red shading in table). 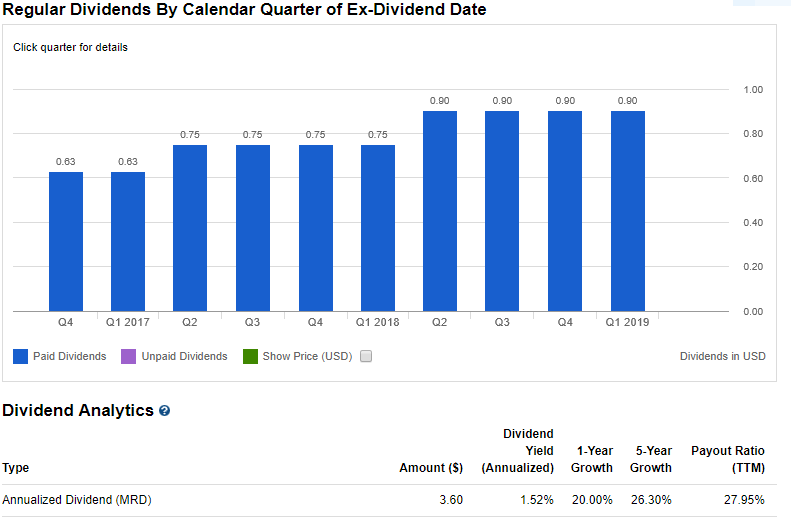 UNH also gets strong quality marks across the board and is one of 7 companies in this report to have received a 99 “safety” score from Simply Safe Dividends (yellow shading). I much prefer it to Humana (HUM).

However, UnitedHealth yields only 1.5%, and those who believe that universal health care in America is inevitable might be reluctant to invest in an insurance company.

Low yields also make me a little less enthusiastic about the medical equipment companies on the list.

Still, Becton Dickinson, Medtronic (MDT) and Stryker (SYK) are Dividend Aristocrats with 25+ consecutive years of increasing their payouts (dark blue shading in table). And Abbott Labs (ABT) would be an Aristocrat, too, if it hadn’t spun off AbbVie (ABBV) about six years ago.

If you have been following the IBP, Medtronic no doubt sounds familiar to you. We bought it back in January, only to sell it about 6 weeks later after discovering that our brokerage wouldn’t automatically reinvest its dividends because MDT is based in Ireland.

If you don’t want to reinvest dividends or if you use one of the many brokerages that will “drip” foreign divvies, you very well might find MDT attractive, so I included it here. It’s a fine company and it certainly appears better valued than SYK or ABT.

Of the three biopharm companies, Amgen was the only one to receive a 1 Safety score from Value Line (purple shading); AbbVie and Gilead Sciences (GILD) got 3’s, which some might say speaks to their more speculative nature.

Amgen was the very first company we bought for the IBP, and we added ABBV this past December.

I also own both in my personal portfolio; I have GILD, too, and it has been one of my biggest dogs. 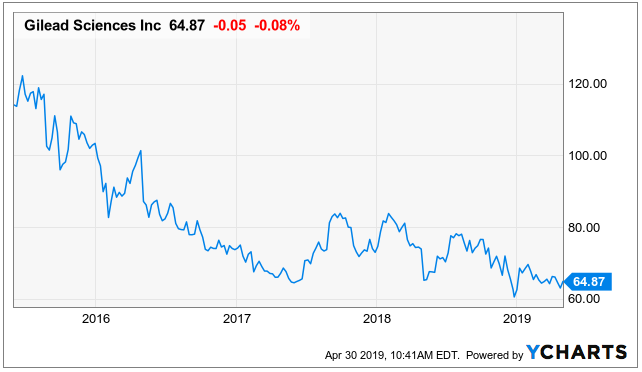 Gilead has had difficulty developing new big money-making drugs in recent years, so this is another major turnaround story for the more adventurous investor. In all honesty, it’s hard for me to envision ever adding it to the IBP, despite its growing dividend.

In addition to political pressures, biotech and pharmaceutical companies constantly face pressure to develop new medications to replace those that are being challenged by generics. It is an expensive, time-consuming, unappreciated process.

AbbVie, for example, relies so heavily on blockbuster drug Humira that competitors’ biosimilars are seen by some as an existential threat to the company if ABBV’s pipeline doesn’t start being more productive soon.

And Then There’s JNJ

Johnson & Johnson is not trading at a discount these days, so it doesn’t receive any of those lovely shaded areas in the valuation section of my table.

In the quality section, however, look at all those pretty colors!

JNJ has a wide moat, receives the highest safety and financial strength scores from Value Line and Simply Safe Dividends, and is one of only two companies in the world to receive S&P’s AAA credit rating. (Microsoft is the other.)

Johnson & Johnson also just announced it is raising its dividend for the 57th consecutive year.

Whenever I’m on the fence about what to buy, either for the IBP or my own portfolio, I always ask myself: “Hmm … should I just get some more JNJ?”

Whenever one does a study like this, one naturally cannot include every stock investors might want to consider.

There are many high-quality companies in the Health Care sector that I left out; similarly, I included a few that I’m not especially high on because I wanted to give investors plenty to compare and contrast.

And I didn’t even go into some sectors that have a significant health care presence (such at REITs, Industrials and Consumer Staples), because I didn’t want to get too far afield.

There are many reasons to invest in Health Care, including a society that is getting older, the general defensive nature of the sector, and considerable government contributions to care for seniors, children, disabled people and veterans. 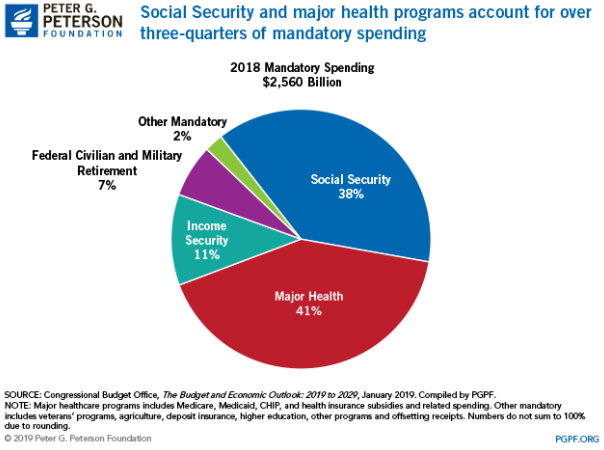 Of course, as outlined earlier in this article, there are plenty of reasons to be wary, too, with political noise (and potential major legislation) ranking high on the list.

Only you can decide where you stand on the risk/reward factors, and which industries might be right for your investment dollars.

As always, I urge investors to conduct considerable due diligence before buying any stock.