When it comes to stocks, I loathe the term “safe.” If you put your money into the market, you are putting it at risk … period.

That being said, everything is relative, so the investor in me asks questions such as …

Is this company fundamentally sound and therefore able to deliver on the promises it makes to shareholders?

Does it have a proven track record?

Does it have a competitive economic advantage over its peers, something Warren Buffett calls a “moat”?

That is the kind of business I want to own a piece of, and that is the type of company I strive to choose for DTA’s Income Builder Portfolio.

Almost exactly a year ago, I ticked off the reasons I selected Johnson & Johnson (JNJ) as the IBP’s eighth component. Among them:

So, how did Johnson & Johnson do? Well, the company’s ability to predict its performance is just about as impressive as its ability to perform. 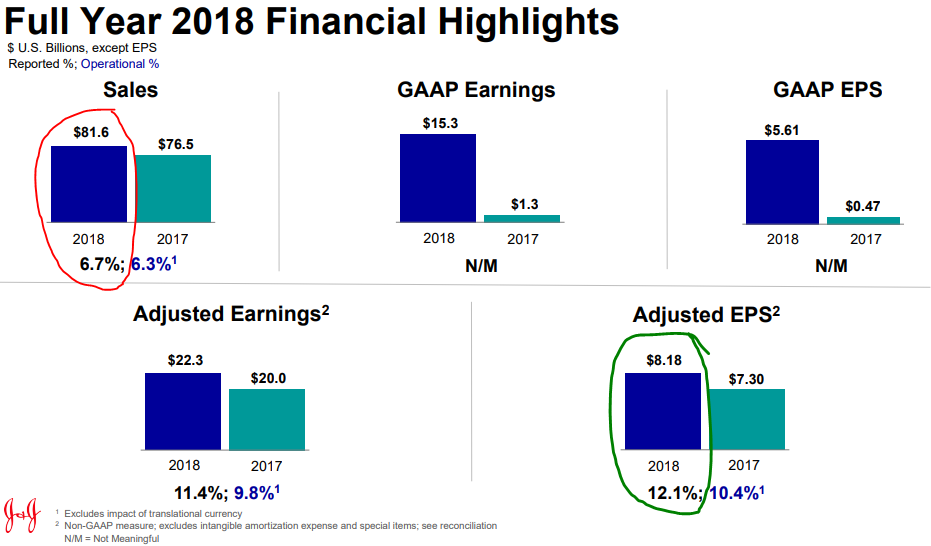 Consistency, stability, quality, innovation, performance. As an investor, those are the words that come to mind when I think about the world’s largest health care company.

It’s why JNJ is the largest holding in my personal portfolio, it’s why I made Johnson & Johnson a part of the Income Builder Portfolio in April 2018, and it’s why I have decided to double up on the IBP’s position.

Come Tuesday, April 23, I will execute a purchase order on Daily Trade Alert’s behalf for about $1,000 worth of JNJ stock. I expect to add 7 more shares to the 7.1857 the portfolio now has.

The Latest from J&J

Rather than throw out a bunch of numbers, I’ll let the following slide from the company’s Q1 2019 earnings presentation tell the tale. 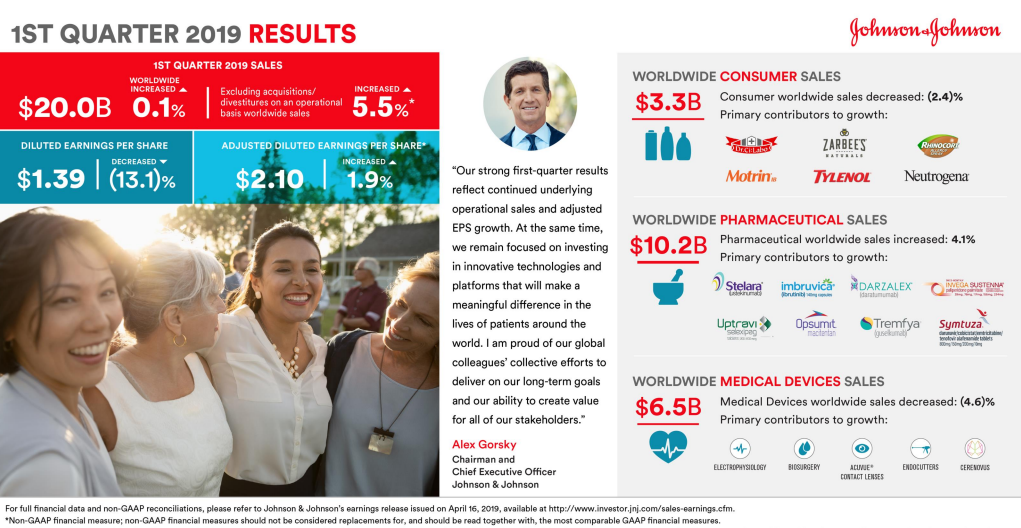 If I ran a business as outstanding as Johnson & Johnson, I’d do a lot of bragging, too, so I’m happy to show the following slide from the 4Q 2018 presentation: 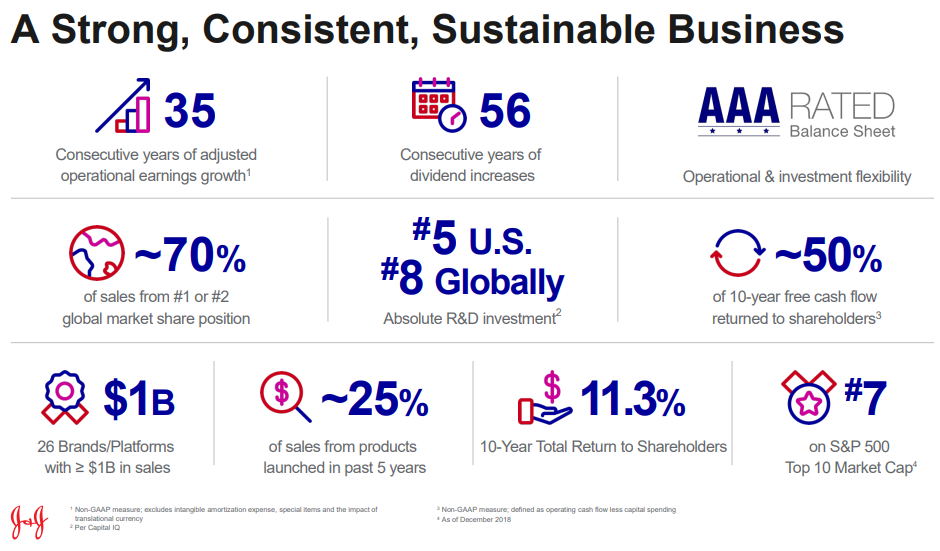 Obviously, I need to update a couple of the bullet points I made early in this article to reflect that JNJ now has grown earnings for 35 consecutive years and has raised its dividend 56 years in a row.

One of the figures that jumps out at me: 26 different brands or platforms have achieved at least $1 billion in annual sales. A full dozen of those are $2 billion producers.

In a competitive landscape, no matter how successful you have been, if you stand still you lose.

So Johnson & Johnson, like most superlative companies, is always innovating.

That might seem obvious for things like medical devices and drugs, where research must keep coming up with new and better ways to treat illnesses, but it’s also the case in the more mundane world of consumer products. 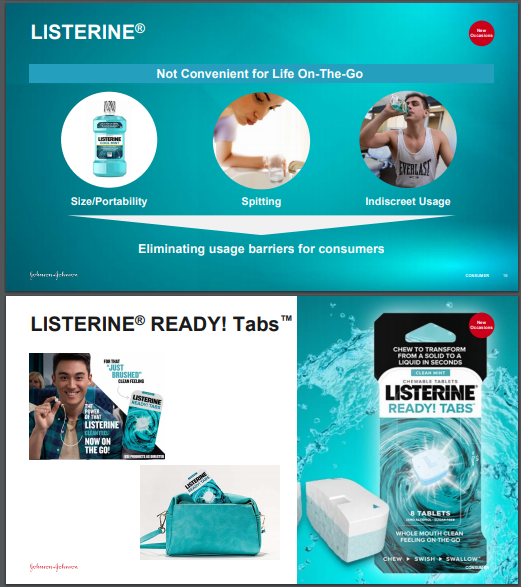 The above slides from J&J’s presentation at the 2019 Consumer Analyst Group of New York conference indicate how JNJ increased sales for one of its best-selling brands, Listerine, by coming up with Listerine READY! Tabs — a product that’s more convenient for active people than the traditional “swig, swish & spit” version.

After announcing on April 16 that it had beaten analyst estimates for 1Q 2019 earnings and revenue,  JNJ is forecasting another strong year. 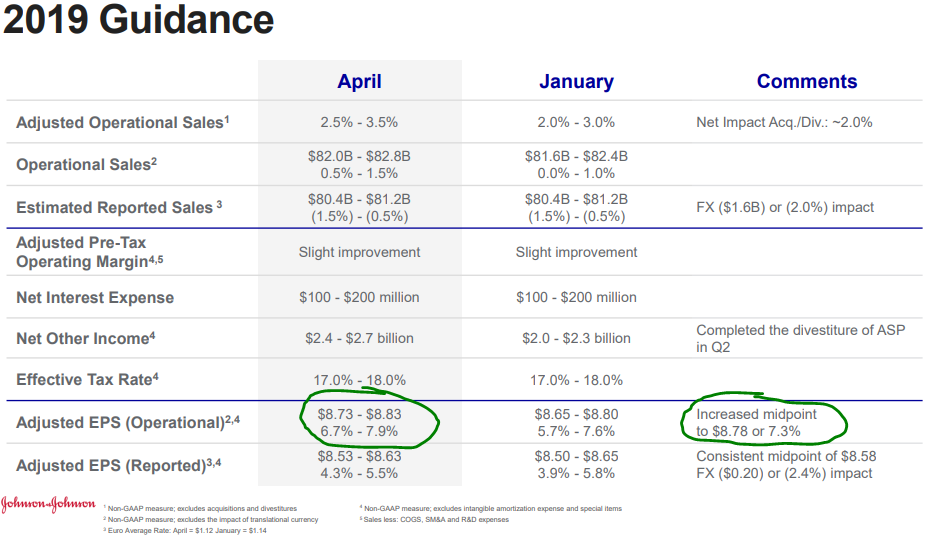 As you can see from the above slide, the company raised guidance it had stated just three months ago, and it’s now expecting EPS growth of about 7%.

While that is hardly heart-pounding growth, it’s pretty darn good for a conglomerate the size of JNJ.

And again, although there are no sure things in investing, counting on Johnson & Johnson to make good on its guidance usually has been a smart strategy.

Plenty of things are looking up for the company, but it faces some big challenges, too. 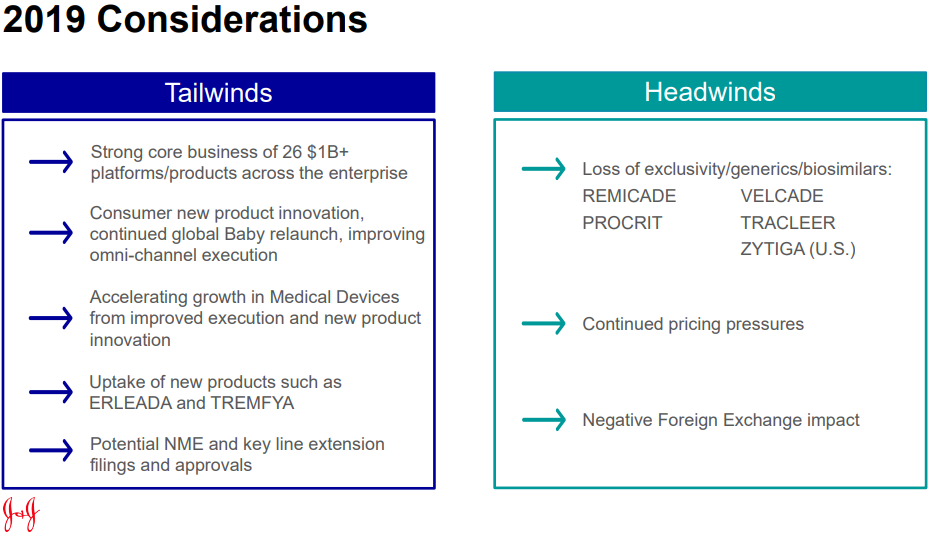 The pharmaceutical segment contributes more than half of the company’s revenue, so it’s always prudent for investors to know what’s going on there.

Specifically, Remicade has been a blockbuster drug for JNJ, but its exclusive patent has expired and it now faces competition from other companies’ biosimilars.

So as is the case for all drug companies, it’s crucial that JNJ have future growth catalysts currently available and in the pipeline. 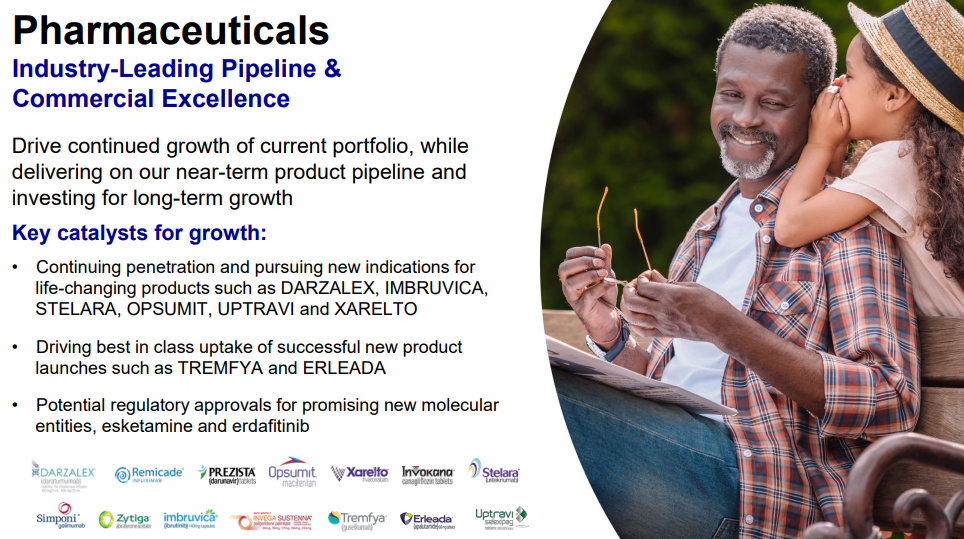 Litigation is another risk that Johnson & Johnson faces, with claims of asbestos in its baby powder (denied by the company) drawing most of the headlines.

Up to a point, lawsuits are a cost of doing business for major corporations, and so far they have not materially affected JNJ.

Another issue to watch: 2020 is an election year, and drugmakers are easy marks for both sitting legislators and those running for office. I mean, no politician has ever campaigned on a platform of raising drug prices.

Show Us The Income

JFK was in the White House and the Beatles had yet to appear on the Ed Sullivan Show the last time JNJ didn’t give investors an annual dividend increase.

Since the early-1960s, it’s been a beautiful, steady climb for this Dividend King. 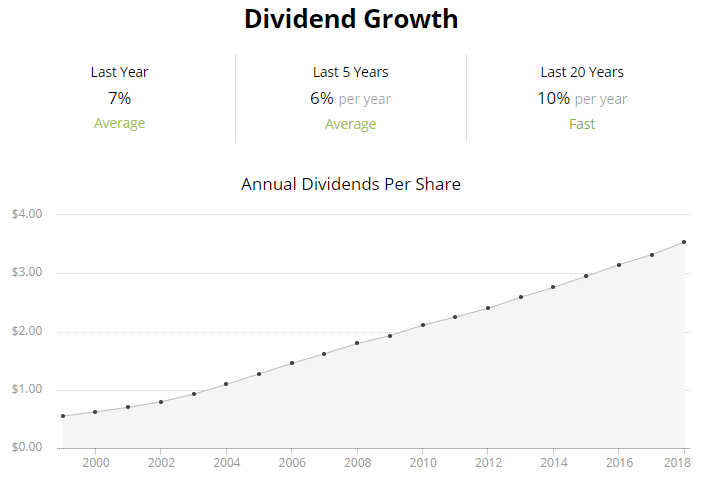 Simply Safe Dividends gives Johnson & Johnson a safety rating of 99 — nearly a perfect score — and the graphic above illustrates why JNJ is seen as almost a must-have stock in any Dividend Growth Investing portfolio.

Before April is over, the company is expected to announce its 57th consecutive annual dividend increase. Life is always good for income-oriented JNJ investors!

The Income Builder Portfolio includes 25 companies, and Johnson & Johnson is the seventh that I have selected on two different occasions.

Now that I think of it, I wonder what took me so long to make JNJ part of the double-up crew.

My article about the execution of our purchase, along with a look at the company’s valuation and other relevant information, will be published Wednesday, April 24.