The above graphic depicts the incredible year-over-year dividend growth of The TJX Companies (TJX) since the Great Recession.

What else is new? An off-price apparel and home furnishings retailer that is best known for its T.J. Maxx, Marshalls and HomeGoods chains, TJX has grown its dividend for 20+ years at an average of 20+ percent.

Even from 2007-2010, during the second-worst financial crisis of modern times, TJX’s average raise was more than 22%. 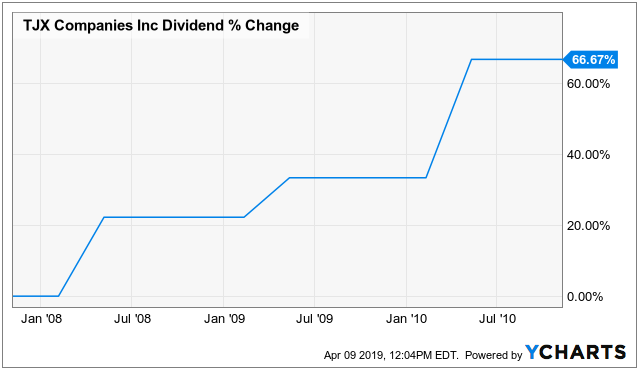 Some Dividend Growth Investing practitioners might not like the company’s lowish 1.7% yield (which actually is near its decade-long high) … and that’s understandable for retired folks who are living off of their dividend income.

Still, there is room for a company like TJX in a portfolio held by any income-centric investor who truly values the “G” in DGI.

So it should be little surprise that I selected TJX as the 25th component of DTA’s Income Builder Portfolio. And on Tuesday, April 9, I executed a purchase order for 19 shares at $54.04 apiece on Daily Trade Alert’s behalf. 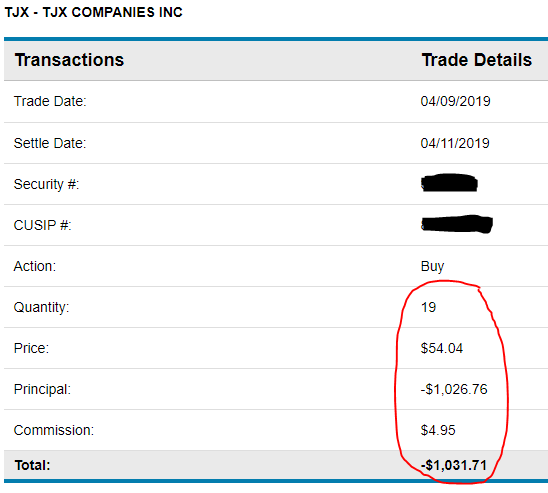 TJX has been a strong performer for decades, not just as a stock that has crushed the overall market in total return but as a company that has grown earnings, revenues, free cash flow and dividends year after year after year.

The following “Financial Sonar” from Jefferson Research illustrates that strength: 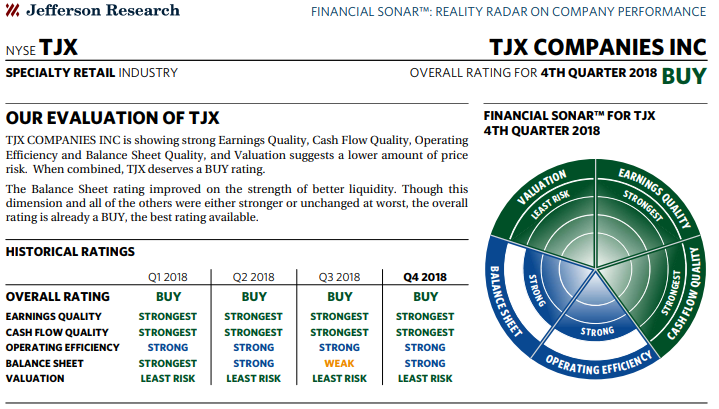 My previous article touched on many of the reasons I chose TJX for the IBP. I also discussed the company more than a year ago HERE, stating that TJX and Costco (COST) were my favorite bricks-and-mortar general retailers.

And Then There’s That Dividend

Last week, TJX announced an 18% dividend hike, with the company raising its quarterly payout from 19.5 cents per share to 23 cents. (TJX also discussed its buyback program; more on that later.)

However, when one uses the total dividends paid in 2018 (74.13 cents) and the total distributions projected for 2019 (88.5 cents), the year-over-year increase actually is 19.4%, and that’s the figure I added to the image at the very top of this article.

The dividend is reliable, too.

This graph from McLean Capital Research shows that TJX’s free cash flow has easily covered the payout every quarter.

Simply Safe Dividends gives TJX a solid “safety rating” of 78; here are some other interesting metrics from SSD, mostly related to income, about the IBP’s newest position:

The IBP Business Plan mandates that dividends get reinvested back into the same companies, so the portfolio will receive about .08 of a share if TJX is still trading around $54.

Then, come September, the new share total of 19.08 would generate $4.39 in income, and that will be used to buy yet another fraction of a share.

Bingo, bango, bongo … that’s how an income stream gets built, and it explains this project’s name.

Analysts are bullish on TJX. Thomson Reuters surveyed two dozen, and 75% of them rated the company either a “strong buy” or a “buy.”

Schwab’s analysts predict that TJX will be a “strong outperformer” over the next year, giving the company its highest probability to achieve price appreciation.

CFRA’s analyst rates TJX a “buy” and says there is about an 11% upside over the next 12 months.

Value Line forecasts an 18-month target price of about $61 (purple circle) and 3-5 year appreciation of as much as 39% (red circle).

The blue-circled area in the above Value Line image shows that its analysts consider TJX to be fairly valued, as 1.00 is the average “Relative P/E” of the 1,700 companies in VL’s coverage universe.

The Morningstar Investment Research Center considers TJX to be somewhat overpriced, assigning a fair value of $45.

The blue-circled area in the following Morningstar graphic shows that the trailing 12-month P/E ratio is higher than the company’s 5-year average. However, the forward P/E (yellow highlight) and especially the PEG ratio (red circle) are more attractive. 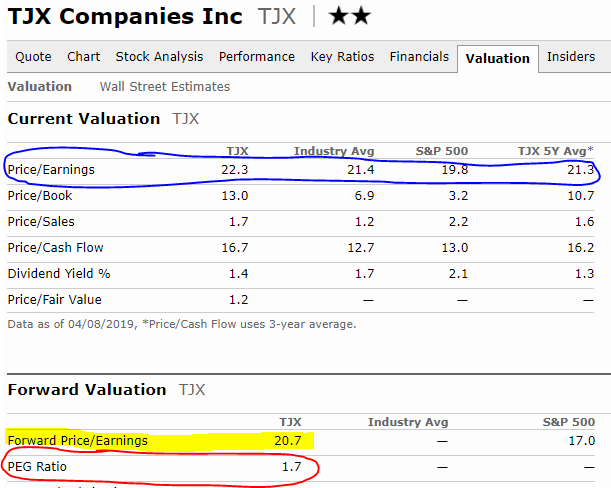 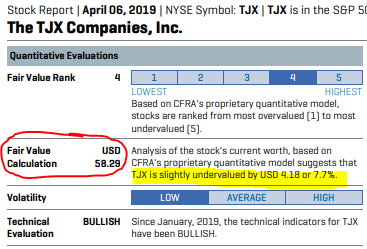 FAST Graphs shows TJX to be quite overvalued if the timeline is longer (top illustration), or a little overvalued compared to the company’s more recent history (bottom graphic). 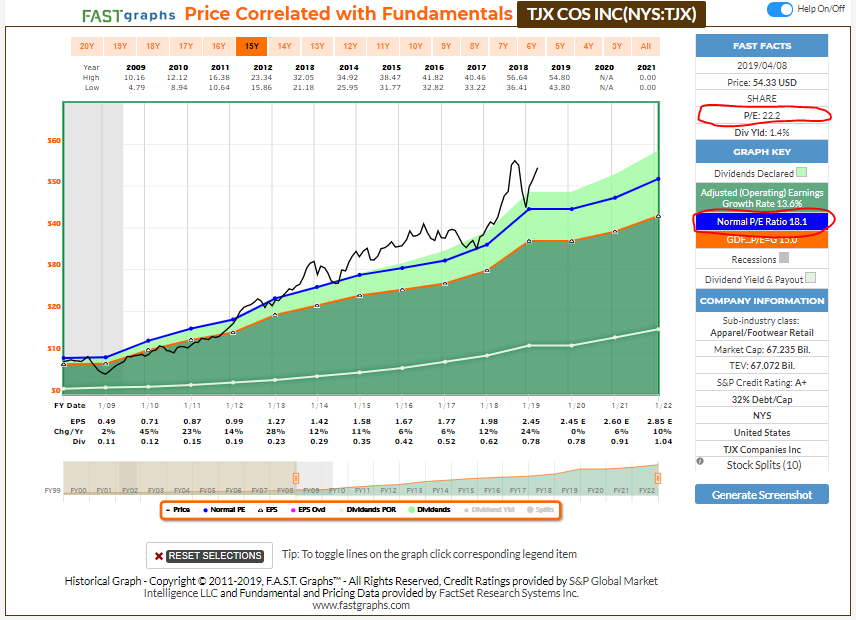 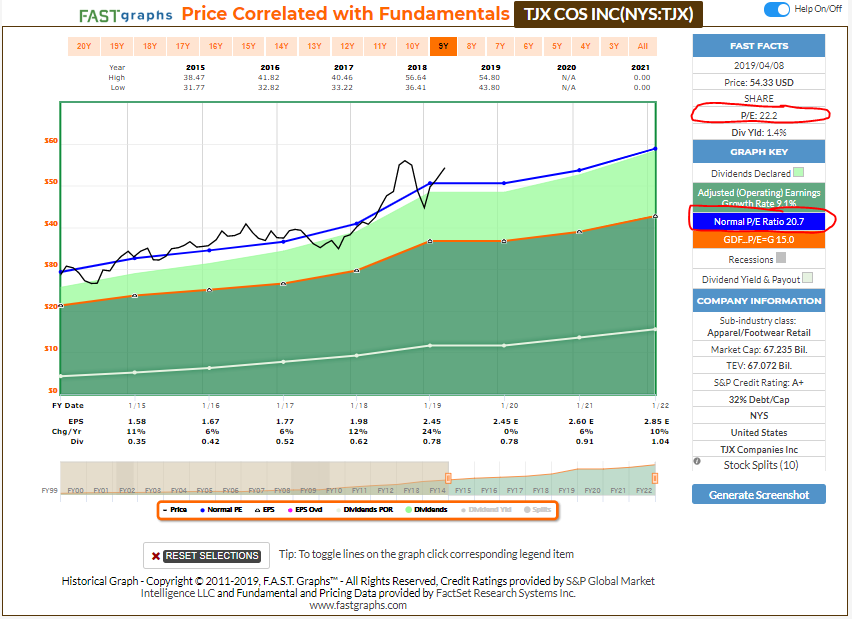 I don’t think TJX is too expensive to purchase here, but its price does make me wish the company would pay an even higher dividend rather than ratchet up its buyback program.

Generally, I prefer that a company buys back millions of shares only when the stock is on sale, so there’s one little nit I’ll pick with TJX.

As you can see from the Valuation Station information, TJX is not a bargain-basement stock. Then again, it’s not unusual for an extremely high-quality company to trade at a premium, especially 10+ years into a bull market.

I’m happy to add a fundamentally strong company with a proven commitment to significant, sustainable dividend growth to the Income Builder Portfolio.

Investors are urged to conduct their own due diligence before buying any stock.