Publicly traded companies report earnings and other financial information every quarter, and that always presents an interesting quandary for investors:

Should I buy shares before or after the announcement?

As is the case with many investing questions, there is no easy answer, no “right” or “wrong.”

Since I started selecting stocks for DTA’s Income Builder Portfolio 15 months ago, I generally have waited until after earnings reports to make my choices; I mostly do the same when investing in my personal portfolio, as well.

If one bought before earnings and the report turned out to be good, one probably got a better price than if one had waited.

Constellation Brands (STZ), one of the companies in the IBP, had a very nice report on Wednesday, April 3, and the price soared 7.5% during the day.

However, if there’s a negative surprise, the price likely will go down — sometimes significantly — meaning one will have overpaid if one didn’t wait.

The bad news in the report of Walgreens Boots (WBA) on Tuesday, April 2, ended up being very bad news for shareholders, to the tune of a 13% crash. 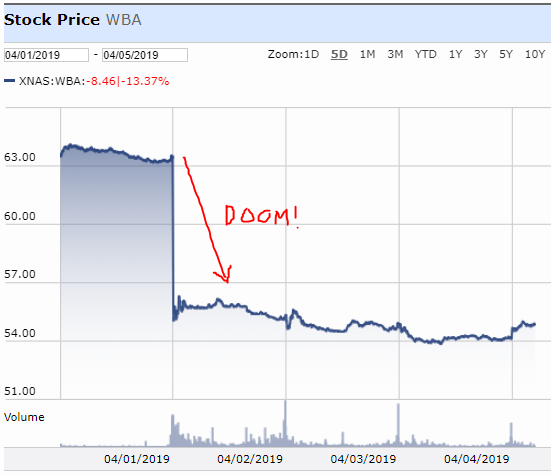 The question about buying before or after earnings goes right to the heart of knowing yourself as an investor.

I know my investing self, and I fall into the latter category. I absolutely hate the idea of paying $64 for a stock today only to watch it plummet to $55 tomorrow.

Another reason to wait: An earnings report might reveal fundamental flaws that eliminate a company’s attractiveness as a long-term investment.

While earnings recently have been trickling in for a few companies, such as Constellation and Walgreens, earnings season starts in earnest in mid-April, when hundreds of companies will be announcing results every day.

Amidst that backdrop, I was tasked with making my next selection for the Income Builder Portfolio.

Several companies on my watch list report earnings in 2-3 weeks, and I did not want to commit Daily Trade Alert’s money to one that might have a negative surprise.

I thought about adding to our Constellation stake, but I always meant it to be a smaller, speculative position, so I didn’t want to instantly turn it into one of the IBP’s larger holdings.

Given all of that, I selected The TJX Companies (TJX), the off-price clothing and home furnishings retailer whose outlets include T.J. Maxx, Marshalls and HomeGoods. 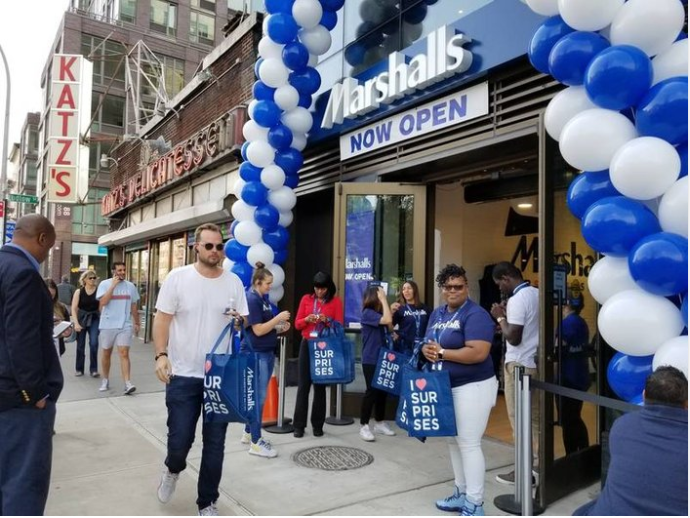 Shoppers flocked to the new Marshalls that opened in Lower Manhattan last year. (Image from patch.com)

On Tuesday, April 9, I will execute a purchase order on DTA’s behalf for about $1,000 worth of TJX. It will be the portfolio’s second retailer, joining Home Depot (HD), and 25th position overall.

It was a good showing, with a 6% increase in comparable store sales, an adjusted pre-tax profit of nearly 11% and a 9% increase in adjusted earnings per share.

If you take a close look at the above photo taken outside Marshalls in New York, you will see shoppers holding bags emblazoned with “I LOVE SURPRISES.” (I’m going out on a limb in surmising that the heart symbol means “love.”)

That’s the advantage TJX has over Amazon (AMZN) and other e-retailers, the thing that makes the business relatively Amazon-resistant.

Marshalls, T.J. Maxx and HomeGoods shoppers love browsing for bargains. Folks return regularly in search of name-brand items they can snag at significantly lower prices than they could get at Macy’s, Nordstrom or Neiman Marcus. Or even at Amazon.

I am careful about calling any business “recession-proof,” but TJX is pretty darn close, as the following graphic illustrates. 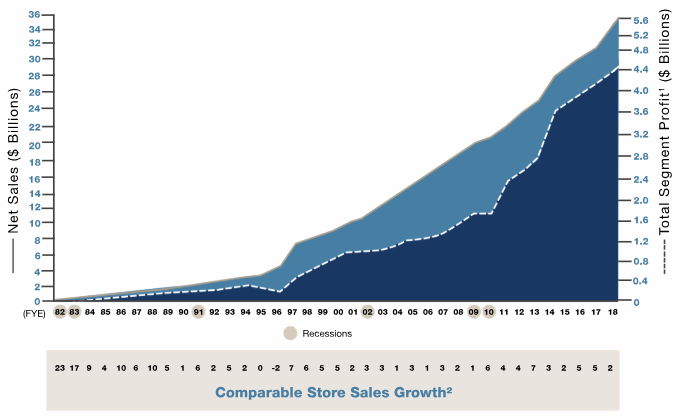 One can see that TJX has performed quite well in good times and bad … and that makes sense. If you’ve just been laid off or taken a pay cut, are you more likely to buy a nice outfit for job interviews at Bloomingdale’s or T.J. Maxx?

Yes, the stock price did suffer a 23% drawdown during the Great Recession … but that fall still was less than half as severe as the overall market’s, as the following comparison with the S&P 500 Index (SPY) shows.

It would be a little dramatic to state that TJX’s goal is to take over the world … but the company is growing not just in the United States and Canada but elsewhere, too.

And its management — given an “Exemplary” rating by the Morningstar Investment Research Center — projects significant growth in Europe and Australia. 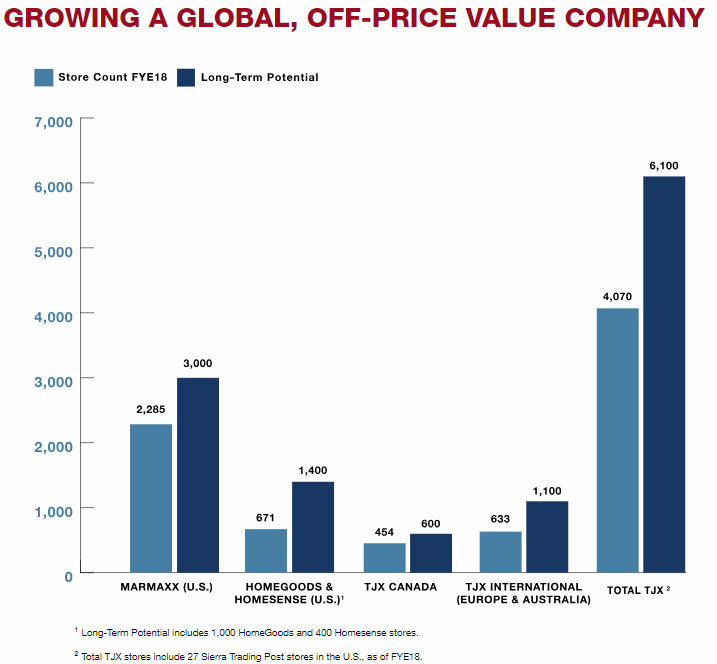 Value Line included TJX on its list of 100 “Highest Growth Stocks” — to be included, a company’s annual growth of sales, cash flow, earnings, dividends and book value must together have averaged at least 10% over the past 10 years and be expected to average 10%-plus in the coming 3-5 years.

That’s impressive enough, but TJX is one of only 10 companies on the list to receive Value Line’s highest Safety score.

Perhaps the only thing that has grown as spectacularly as TJX’s business has been the dividend the company pays its shareholders.

Most incredibly, the dividend has grown at a compound annual rate of 22% over that time.

The red-circled area of the following FAST Graphs chart shows the company’s amazing dividend growth since the start of this millennium. 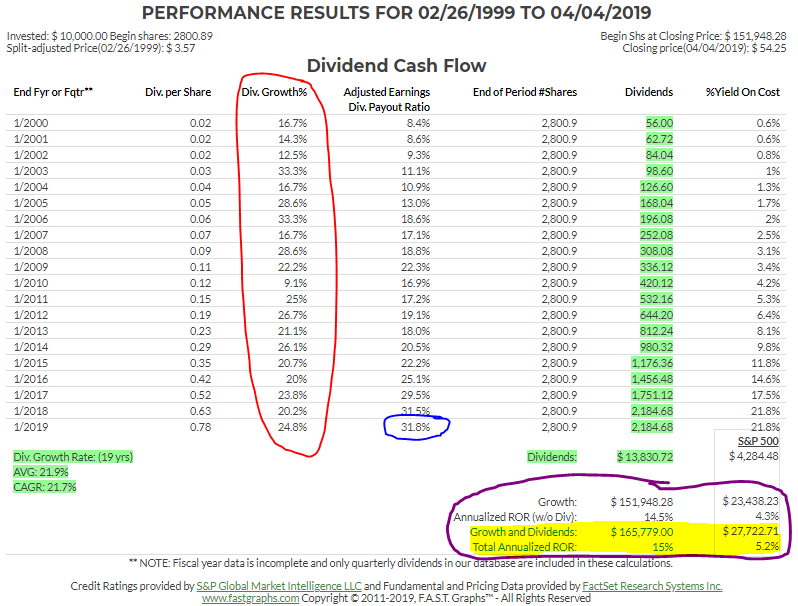 Also notable in the above chart: The blue-circled number indicates that the payout ratio is still very low, making it likely that the robust raises will continue; and the purple-circled area shows how TJX has crushed SPY in total return.

Because TJX is held in such high regard and because it has performed so well over the years, its stock price is not cheap — a situation that contributes to its relatively low 1.7% dividend yield.

Although I fully understand why that might dissuade some value-conscious Dividend Growth Investing practitioners, I happen to believe it is sometimes OK to pay a premium for an exceedingly high-quality company.

TJX has grown earnings through recessions, has withstood challenges from Amazon, has carved out an outstanding niche in the retail industry, and has made a major commitment to its dividend.

It will be a fine addition to the Income Builder Portfolio.

I will thoroughly examine TJX’s valuation and present other information in my post-buy article, which will be published Wednesday, April 10.