How hot was the stock market during the first quarter of 2019?

Let’s go with “smokin’!” … and picture Scarlett Johansson in her Black Widow outfit. 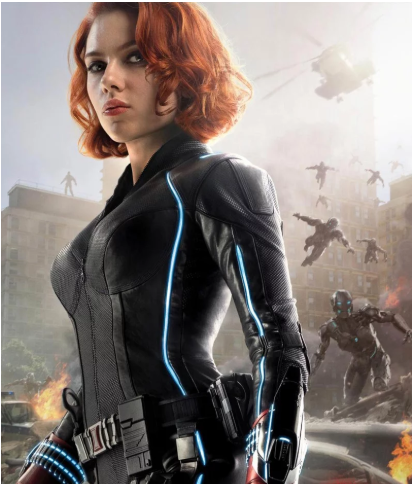 The tech-heavy NASDAQ moved 16.5% higher, its biggest advance since 2012; and the Dow Jones Industrial Index surged 11.2% during the first three months for its best quarter since 2013.

Meanwhile, DTA’s Income Builder Portfolio, in which we have invested about $2,000 per month since the beginning of last year, more than held its own. 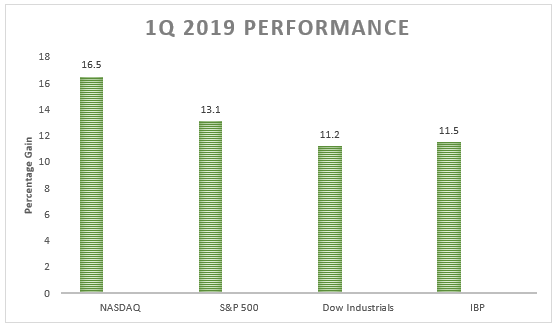 The 11.5% gain shown in the above chart represents the 18 IBP positions that were in the portfolio at the end of 2018 and that received no new funds in 2019.

Beating the Dow and hanging right in there with other major indexes … not too bad for a portfolio that’s being built using the slow-and-steady Dividend Growth Investing strategy. 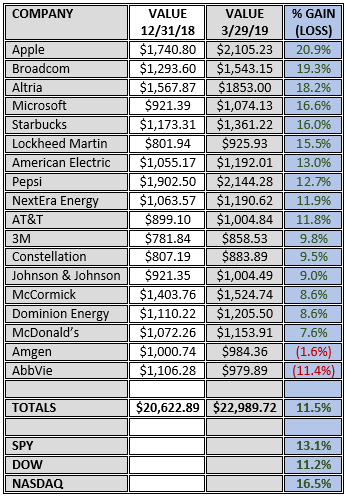 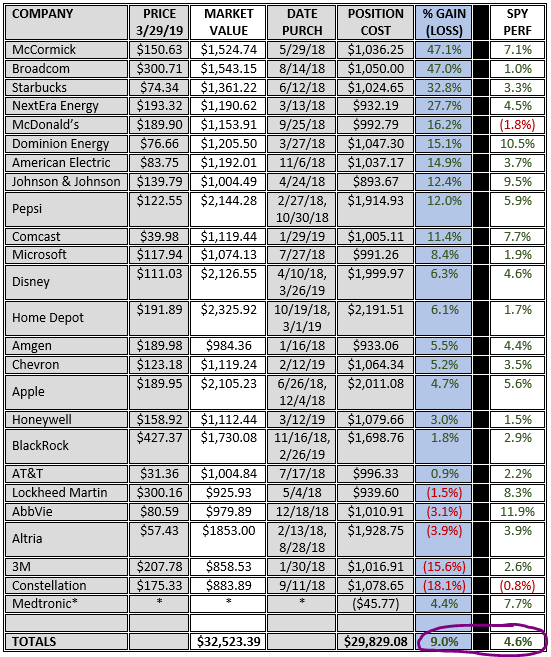 For comparison’s sake, I used the Dividend Channel calculator to obtain the total return of SPY from the date of each IBP purchase.

In other words, had we invested the exact same amount of money into the index as we did on each IBP position on the exact same date, there would have been a paper gain of 4.6%.

A few notes on the above table:

++ Our choices of Broadcom (AVGO), McCormick (MKC), Starbucks (SBUX), McDonalds (MCD) and NextEra Energy were very timely, as each significantly outperformed the S&P 500 Index since the respective purchase dates.

The biggie: Had we bought SPY instead of AVGO on Aug. 14, our gain would have been a piddly 1% rather than a robust 47%. 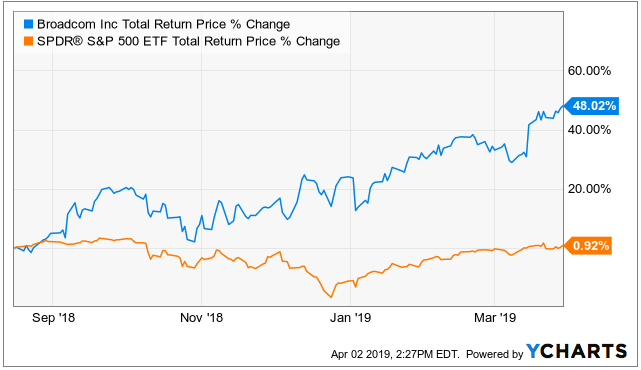 (YCharts shows total return for AVGO as slightly higher because it doesn’t account for the commission we paid.)

++ We would have been better off going wtih SPY on the days we purchased 8 of the IBP’s 24 positions; the biggest laggards have been Constellation (STZ), 3M (MMM) and AbbVie (ABBV).

For example, had we bought the index on Sept. 11, the investment would be down only about 1% compared to the large paper loss for our speculative selection of STZ. 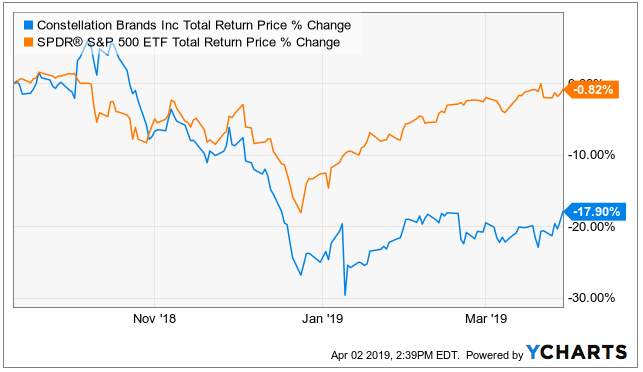 The IBP Business Plan states that total return is only the “secondary goal” of this project, the first being:

I led off this quarterly review with total return because I thought it was extraordinary and revealing. While DGI is an income-centric strategy, careful selection of dividend-growing companies can produce a portfolio that “wins” in multiple ways.

So What About Income?

When one gradually builds a DGI portfolio, either by initiating new positions or by adding to existing holdings, it is difficult to track income growth on an apples-to-apples basis.

After the first quarter of 2018, the IBP held only six companies — and just three of those had paid dividends.

In the year since, we have initiated 18 new positions and added to six existing stakes, and dividends have come pouring in.

As a result of that activity, the income from only two holdings — Amgen (AMGN) and 3M, our two very first buys all the way back in January 2018 — can be compared accurately.

That’s nice — I mean, what employee wouldn’t like a year-over-year 11% raise? — but it doesn’t really tell us how the 24-component IBP’s dividends are compounding and growing.

Until the portfolio is a few years old, comparing income-related performance to its own history is folly.

Instead, I’ll just present the following table showing some pertinent (and impressive) income data, both for Q1, the year and the future. 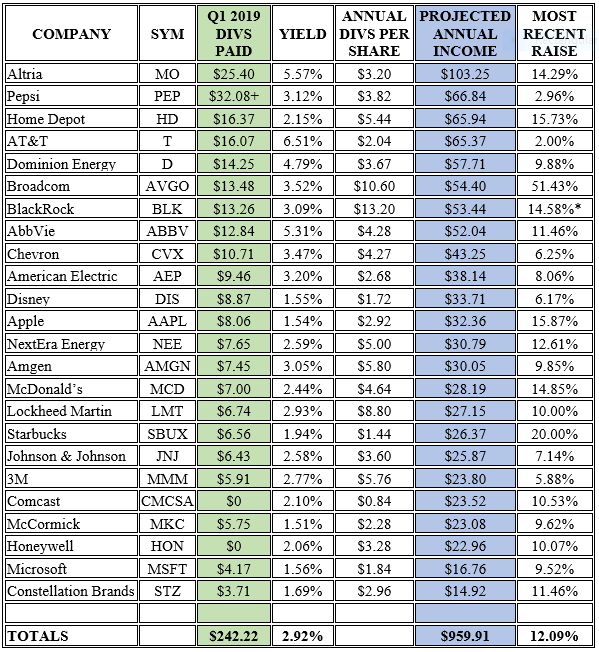 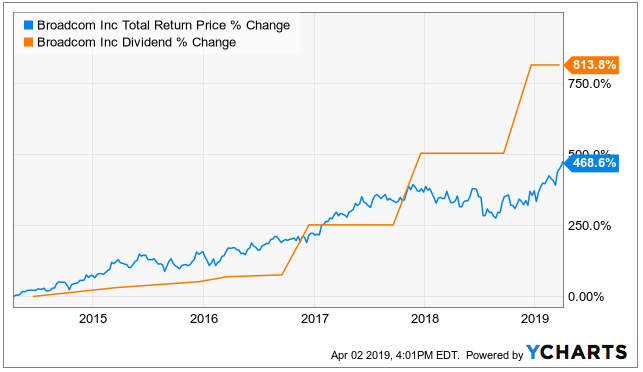 If you had told me 15 months ago that the companies we’d select for the IBP would combine to outperform the market nearly 2-to-1 while also positioning the portfolio to produce almost $1,000 in annual income, I would have done my happy dance right then and there.

Although I can’t promise that the next 15 months will be as fruitful, especially in the total-return realm, I will keep working to identify high-quality, dividend-growing companies. Ideally, the stocks will be reasonably valued, too.

Remember: None of us at Daily Trade Alert is suggesting that investors replicate the IBP; the idea of this endeavor is to present portfolio-building concepts and interesting candidates for further research.

An article with my next IBP stock selection will be published Saturday, April 6.