Baseball Hall of Famer Satchel Paige was famous for tossing unhittable pitches and for dishing out quotable quotes. 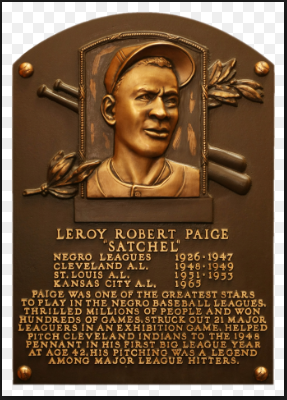 “Age is a question of mind over matter. If you don’t mind, it doesn’t matter.”

And perhaps his most quoted quip of all:

“Don’t look back. Something might be gaining on you.”

The most successful businesses also adopt the philosophy expressed in that Satchelism, and that’s certainly true of Disney (DIS). 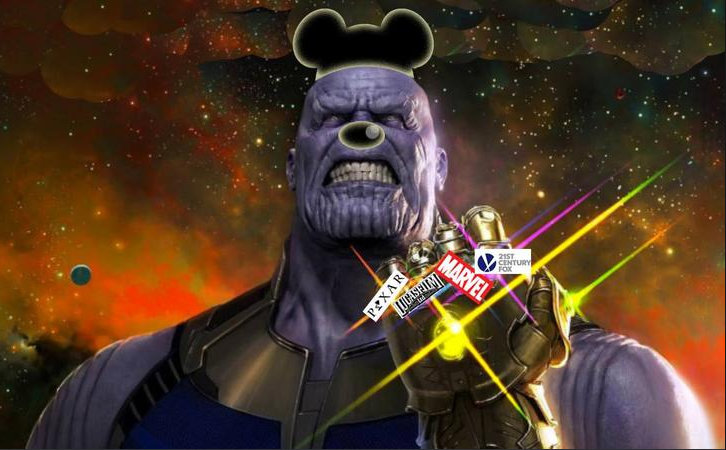 Buzz Lightyear, Thanos, Luke Skywalker and Bart Simpson … all under one roof.

And that’s just the Studio Entertainment segment. Disney’s other divisions have been plenty busy, too.

For example, before 2019 is over Walt Disney World will debut a new resort, Riviera, and a new way to get there — and everywhere else in the Orlando theme park: the Disney Skyliner. 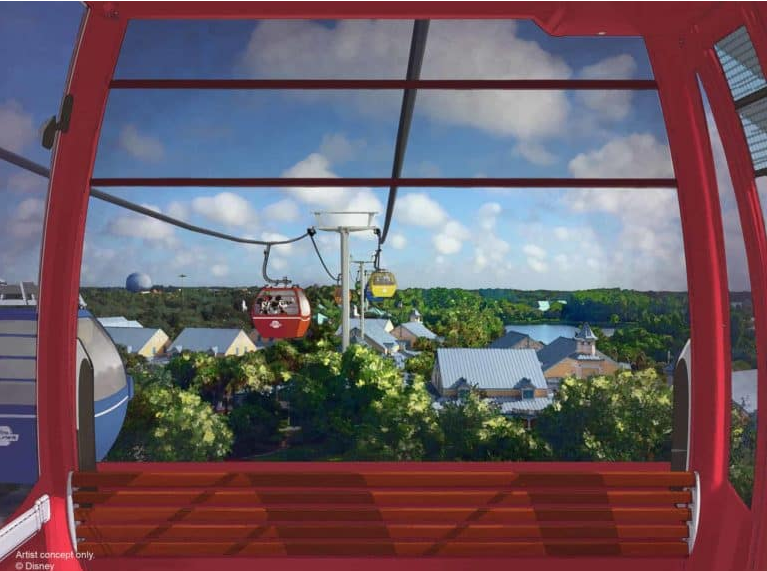 And on and on and on I could go, illustrating why I selected Disney for DTA’s Income Builder Portfolio last year — and why I decided last week to almost double the size of our stake.

On Tuesday, March 26, I executed a purchase order for 9 shares at $109.13 apiece on Daily Trade Alert’s behalf. 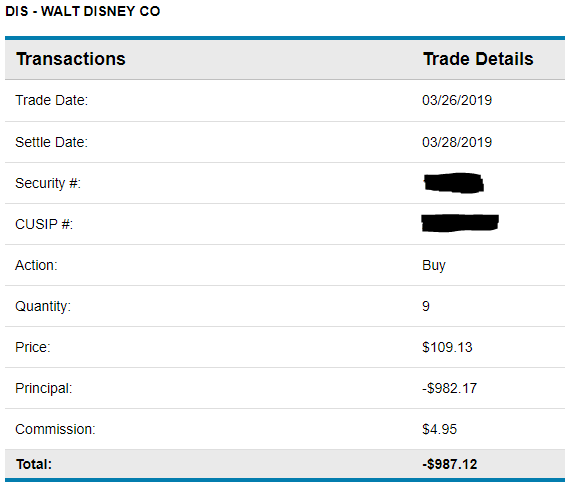 Our real-money portfolio now owns 19.1529 shares of DIS, making it one of four IBP positions with a market value of at least $2,000.

I primarily use the Dividend Growth Investing strategy to build the IBP, so I like that Disney has delivered dividends without interruption for more than a quarter-century and has raised them for 9 consecutive years.

DIS made a single, annual payment until 2015, when it switched to two distributions per year — one in the third fiscal quarter and one in the fourth. 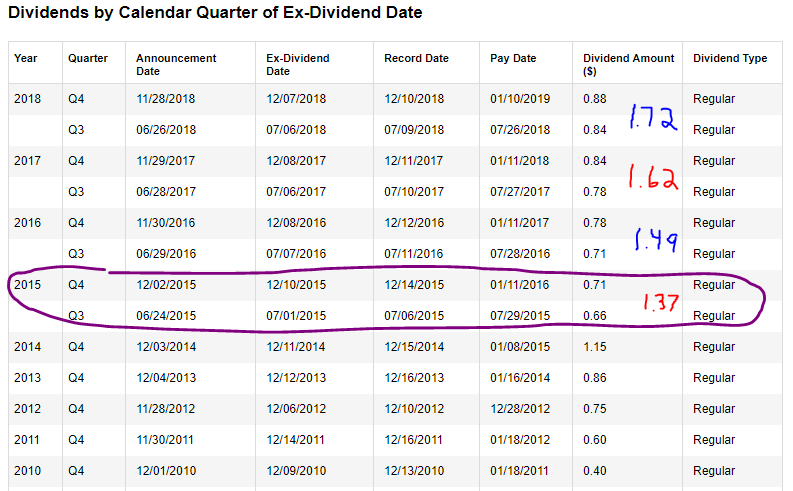 One of my few beefs with DIS is that it doesn’t pay quarterly dividends, and I wish the IBP didn’t have to wait several months to get its next shot of income from the company.

Nevertheless, it’s a trade-off I’m willing to make to own such a high-quality business … and it’s not as if the divvies won’t come rolling in later in 2019.

In late-July, assuming Disney continues its pattern of recent years, the portfolio will receive $16.85 — or 88 cents for each of our 19.1529 shares.

Because we reinvest dividends right back into every company, as mandated by the IBP Business Plan, we will receive about .155 of a share if the price is still around $109.

That will buy still more DIS stock — illustrating why we named this endeavor what we did.

Market watchers are bullish on Disney, with a significant majority of analysts surveyed by Thomson Reuters giving the stock either a Strong Buy or Buy rating.

Value Line believes Disney’s price could appreciate 25% or more over the next 18 months (purple circled area) and as much as 65% over the next 3-5 years (blue circle).

The 0.80 Relative P/E (red circle above) signifies that Value Line considers DIS to be undervalued compared to the 1,700 companies VL covers; 1.00 is fairly valued. 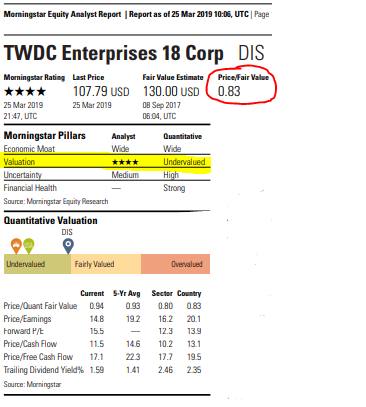 The following table from Morningstar shows how favorably Disney’s current valuation metrics compare to the company’s 5-year average, the industry and the overall market. The 1.7 PEG (price/earnings to growth) ratio is quite attractive. 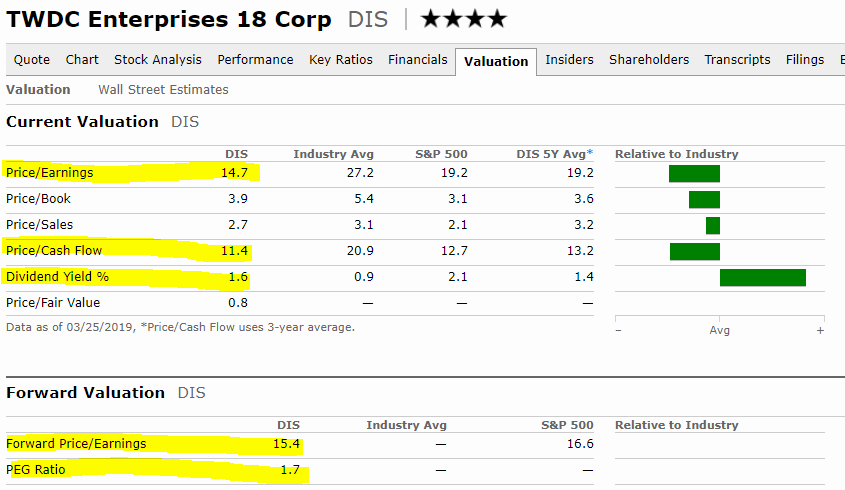 CFRA’s analyst puts a price of about $114 on Disney, signifying undervaluation. 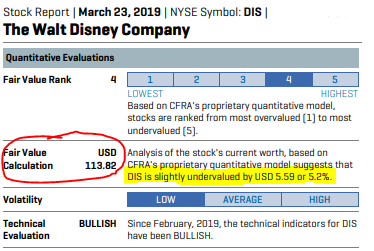 FAST Graphs shows that DIS’s “blended P/E ratio” of 15.3 is well below the company’s norm. 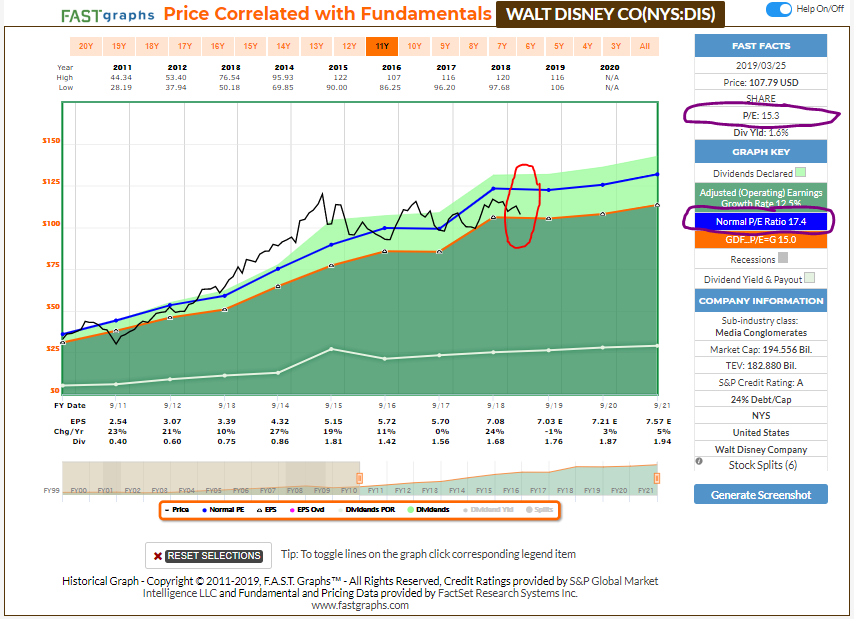 I used a red circle above to indicate that Disney’s price (black line) is well below the normal P/E (blue line) and almost touching the 15 mark (orange line). Historically, DIS has almost always moved higher when its P/E ratio has been at this level.

The valuation metrics look very favorable for Disney, and that data did influence my decision to add more shares to the Income Builder Portfolio’s DIS position.

Still, there are no guarantees — not with Disney, nor with any other stock.

That’s why I am always looking for high-quality businesses that show consistent growth and an aversion to resting on their laurels, because over time those companies tend to do very well in both income generation and total return.

Disney regularly celebrates its glorious history, but its leaders don’t look back so often that they let the competition gain ground.

Were Satchel Paige around today, I have a feeling he’d be very happy to invest in DIS.