There’s a Fox in the house, and I’m not gonna grouse. Tell your kids, tell your spouse: We’re doubling down on the Mouse!

Has my NCAA basketball bracket been busted so badly that I’ve lost my mind?

Well, maybe … but that’s not why I went all Rhyming Man on y’all.

Already one of the world’s iconic businesses, Walt Disney (DIS) just got a little bit (maybe even more than a little bit) more attractive as an investment after the company closed on its $71 billion acquisition of 21st Century Fox. 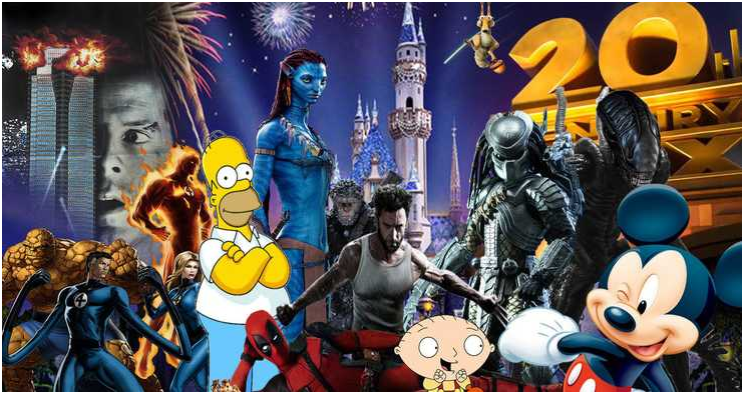 And, of course, Homer Simpson meets Mickey Mouse, as celebrated in this perfect tweet sent out by Disney showrunner Al Jean: 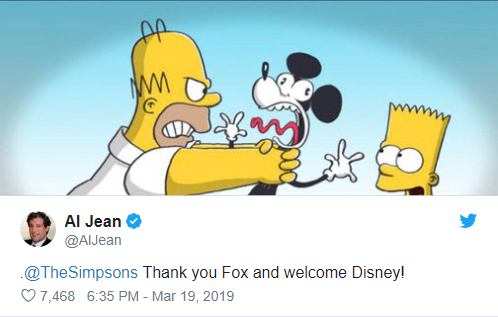 I discussed the Fox acquisition a little bit last April upon selecting Disney as one of the first purchases for DTA’s Income Builder Portfolio:

Many worry that the 21st Century Fox deal will not be approved. If the Department of Justice rejects an AT&T (T) bid for Time Warner, the feeling is that Disney’s acquisition of Fox also could be in trouble.

Well, after fits and starts (and in AT&T’s case, court proceedings), both media mega-deals ended up getting done, and time will tell how they will reshape the worldwide content landscape.

Although the Disney-Fox coupling is not without risk, I am confident the company will continue to showcase its proven ability to make magic for entertainment seekers and shareholders alike.

Come Tuesday, March 26, I will execute a purchase order on Daily Trade Alert’s behalf for about $1,000 worth of DIS.

I expect we’ll add 9 new shares to the 10 we bought back in April.

Although the Fox deal adds significantly to the business, my reasons for doubling down are similar to the reasons I chose Disney for the IBP in the first place, so I won’t repeat them here.

Let’s just say that in the 11 months since that purchase, the company has done nothing to make me regret it.

In its most recent earnings report, presented Feb. 5, DIS beat expectations for both earnings and revenues, with especially strong results in the Media Networks division and Parks, Experiences and Consumer Products segment.

Although viewership losses at ESPN continue to be a concern, the network’s $1.5 billion deal to air UFC (ultimate fighting) already is making its mark.

ESPN+, the $4.99/month streaming service that launched last year, has more than 2 million subscribers. And during the Q1 2019 earnings call, CEO Bob Iger credited UFC for much of the gain:

The very first UFC fight night under our new 5-year rights deal led nearly 600,000 fans to sign up for the service. The fact that 49 million Americans, 15% of the entire population, watched ESPN content on linear TV that day, and millions more engaged on other platforms including ESPN+, speaks to the enduring power of live sports, the strength of the ESPN brand and the value of the UFC rights we acquired. We expect the expansion of combat sports content on the streaming service to drive continued growth in the months ahead. ESPN+ now has 2 million paid subscriptions, double the number from just 5 months ago.

The company soon will launch Disney+, whose content should be popular with parents, not to mention fans of the various entertainment franchises.

Also since the IBP’s previous DIS buy, Black Panther won three Oscars and was nominated for four others (including best picture), and Captain Marvel has done boffo box office.

And on and on it goes. I could keep talking about Disney’s renowned content successes, but then this article would be so long you’d have to take a break from reading it to binge-watch The Handmaid’s Tale on Hulu.

Despite all of Disney’s “moving parts” since the Income Builder Portfolio first bought DIS, our position’s total-return gain of about 8.5% is almost identical to the S&P 500’s performance in that span.

And fundamentally, the company is as strong as The Incredible Hulk, with significant growth in margins, earnings and cash flow in the decade since the Great Recession. 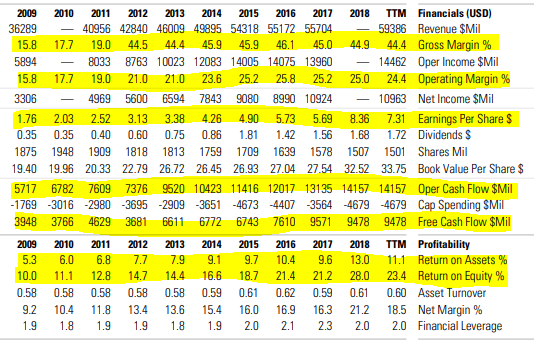 The “Financial Sonar” from Jefferson Research says it all: 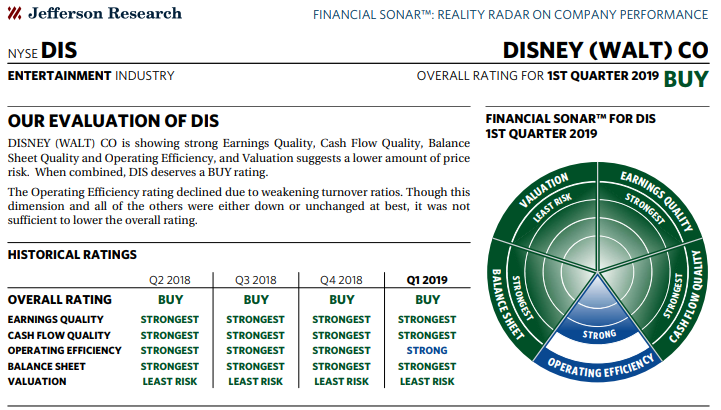 We’re talking about a company that has an A credit rating from Standard & Poor’s, a 1 Safety score and A++ Financial Strength rating from Value Line, and an almost perfect 99 safety score from Simply Safe Dividends.

And Speaking Of Dividends …

Thanks to the compounding power of dividend reinvestment (aka “dripping”), the IBP’s Disney position is actually 10.1529 shares.

At 1.6%, DIS is one of our lowest yielders. Nevertheless, it has raised dividends more than adequately for nearly a decade. 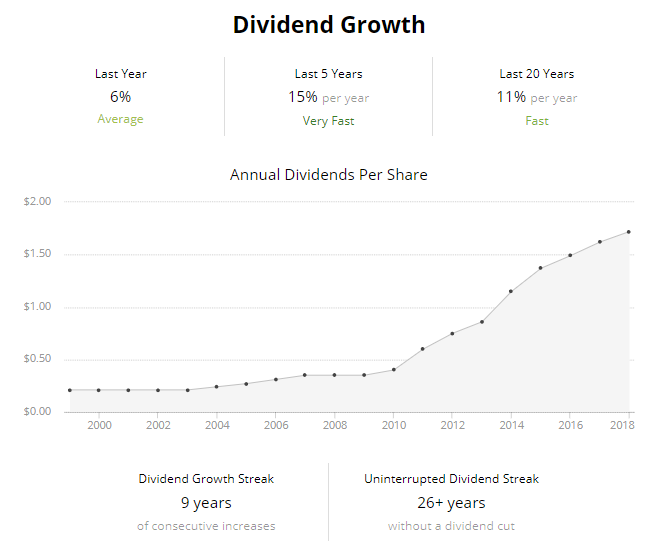 Given the enormous level of free cash flow this company generates, there is every reason to believe dividends will continue to grow for years.

In addition to building the IBP with Daily Trade Alert’s money, I am a Dividend Growth Investing practitioner myself.

I appreciate Disney management’s commitment to its dividend and the company’s financial strength so much that I have made two DIS purchases in the last year for my personal portfolio.

I disagree with The Rhyming Man … because I clearly don’t think the Mouse we can do without.

As important as the last year was for Disney, the next 12 months will be equally so.

Fox’s enterprises must be integrated into the enormous Disney universe, all while pleasing shareholders and the very fickle Mr. Market.

Some companies might not be able to pull it off, but I literally am betting that DIS will.

My next article, to be published Wednesday, March 27, will chronicle the IBP’s purchase and analyze Disney’s valuation metrics.