Ten years ago, the Great Recession bear market officially ended, thus launching one of the longest and grandest bull markets ever. 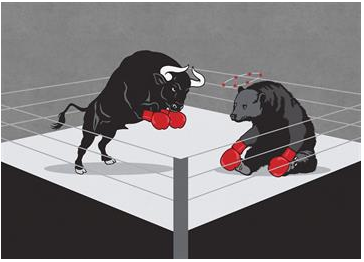 Have you taken advantage of it?

Have you invested in the world’s best companies and shared in their profits and growth? Have you maxed out your 401(k) plan? Have you contributed to Roth IRAs?

I’d love to say that I went all-cash shortly before the recession began and then poured all of my millions — Wait, did I say millions? I meant billions! — into the market on March 9, 2009.

Funny thing about pinpointing the moment a bear market ends, however … we can’t do it until well after the fact.

They ring the bell at the New York Stock Exchange at the start and end of every trading session … but, darn it, they don’t ring that bell extra loudly to announce that a bullish decade is about to begin. 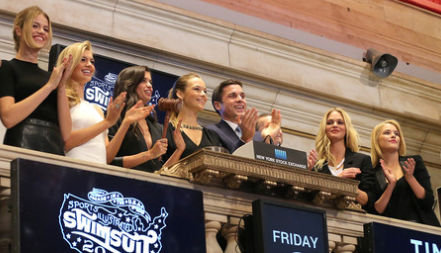 Fortunately, although I hadn’t been prescient enough to load up on 3/9/09, I also hadn’t panicked during the recession — meaning I didn’t sell a bunch of stocks at the bottom of the market.

I held on tight, came out the other side, and kept putting money into my 401(k) and Roth IRA along the way.

And once my confidence returned, and I learned more about investing in individual stocks using the Dividend Growth Investing strategy, I started aggressively building a portfolio featuring blue-chip companies that have paid (and usually increased) dividends through good times and bad.

One of those companies is Honeywell (HON), one of the world’s largest and most successful industrial conglomerates.

No, I didn’t start buying Honeywell on March 9, 2009. If I had, I would have experienced a nearly 750% gain that would have crushed every market index out there. 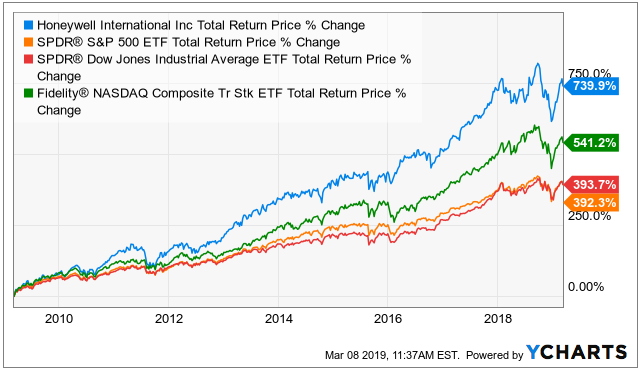 Nevertheless, I am happy to have owned shares of HON for quite some time, and I feel good about selecting it as the next component of DTA’s Income Builder Portfolio.

Come Tuesday, March 12, I will execute a purchase order for about $1,000 worth of Honeywell on behalf of Daily Trade Alert.

It will be the IBP’s 24th position, and HON will join 3M (MMM) as our second industrial conglomerate.

A Honey Of A Corporation

Even after spinning off two units last year to become a leaner, more efficient operation, Honeywell has its hands in all kinds of industries.

Rather than list them all, I’ll let the following image from the company’s site do the talking:

During its most recent earnings presentation, on Feb. 1, Honeywell showed just how well it performed in 2018. 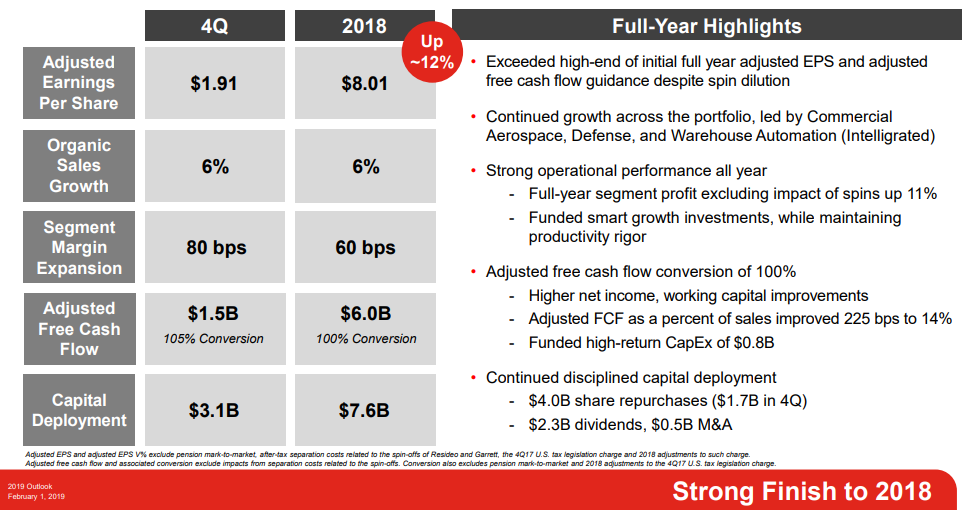 Despite that impressive showing, Honeywell’s stock price has mostly tread water since then.

Some of that is due to the ebbs and flows of the overall market, which is down slightly since mid-February due to macroeconomic and political issues. But some also might be due to Honeywell’s muted guidance for 2019.

As the following FAST Graphs image indicates, the middle of that range — $7.95 — would represent only Honeywell’s second year-over-year EPS decline in the last 15 years. 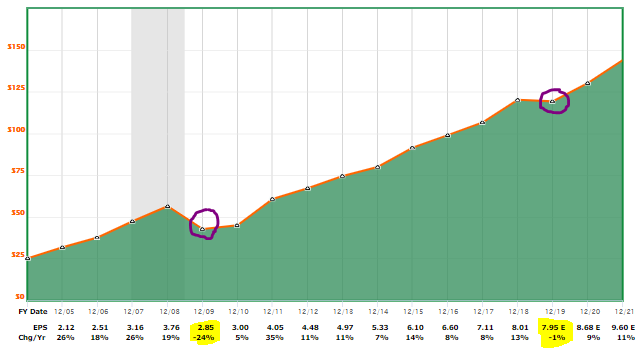 The good news is that EPS is expected to increase smartly again in 2020 and beyond.

The other good news is that Honeywell is famous for being extremely conservative with its EPS projections. Indeed, the company hasn’t missed expectations in any quarter since the recession.

A Honey Of A Divvy

Honeywell has paid a dividend without interruption or reduction for 26 years.

Since freezing its payout the year the recession ended, the company has raised its dividend for eight consecutive years, each by a double-digit percentage. 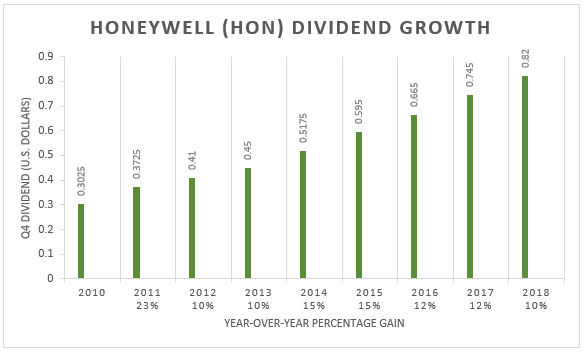 It’s one of the safest dividends in all of investing, too.

Jefferson Research uses a “Financial Sonar” to illustrate each company’s balance sheet, operating efficiency and other metrics … and Honeywell is outstanding across the board. 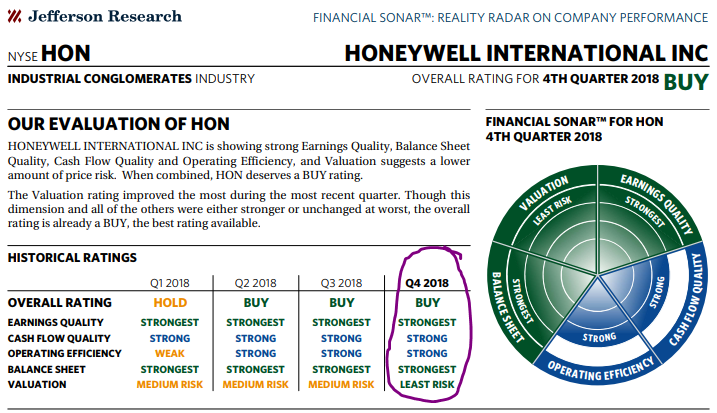 Those are among the many ways to say HON is a high-quality business.

Even outstanding companies face risks, though, and Honeywell is no different.

The U.S. government is one of the primary customers of Honeywell’s Aerospace segment, so spending reductions, regulations, sequestration threats and the like can have a big impact.

Other divisions can be hurt by housing downturns, tariffs, and problems within the oil and gas industry.

I showed earlier how HON has outperformed since 2009. During the Great Recession, however, Honeywell’s 60% drawdown was even steeper than that of the overall market. 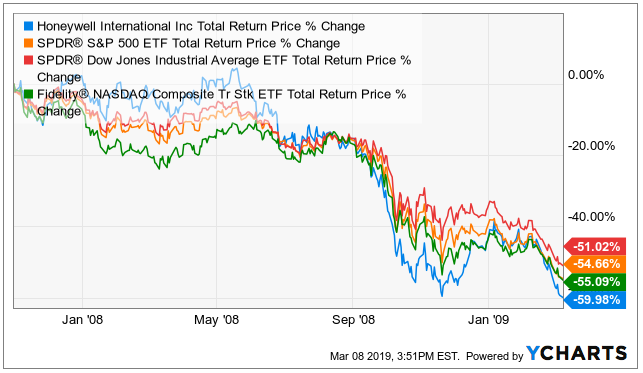 Even though Honeywell deals with military defense, you can see from the above chart that it is not a “defensive” investment.

As always, I strongly urge each potential investor to conduct his or her own due diligence, and to honestly assess his or her risk tolerance level and goals.

If the possibility of suffering sizable capital losses during a bear market freaks you out, Honeywell — as good a company as it is — probably is not for you.

Still, here is one last chart to show that shares of HON purchased just before the recession and held until today would have come out A-OK. Indeed, the investment would have delivered market-beating results. 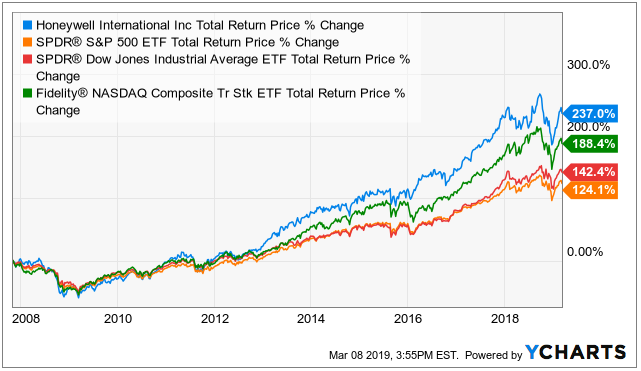 Besides, the Income Builder Portfolio is diversified, with holdings in the utilities, health care and consumer staples sectors. McCormick (MKC) is a classic example of a defensive business.

Remember, Dividend Growth Investing is not a day-trading strategy but a long-term one … and Honeywell fits quite well in a DGI-based portfolio like the IBP.

My article about the execution of our HON purchase, along with some pertinent valuation information, will be published Wednesday, March 13.