I like to let my winners run, and I like to give my losers a chance to prove they eventually will be winners.

As a Dividend Growth Investing practitioner, I take a long-range view that is measured by years (or decades) rather than by days (or hours).

Also, selling makes me have to get two decisions right: the sell and the corresponding buy.

For those reasons and more, I am a very reluctant seller — and an investor who lists “Hold” as my default setting.

But yes, I will occasionally sell. In my personal portfolio last year, for example, I did divest three positions.

And now, I have made the first sell from DTA’s Income Builder Portfolio, bidding farewell to Medtronic (MDT) … and saying hello to more shares of Home Depot (HD).

Since we launched this real-money, real-time, DGI-based endeavor in January 2018, we had made two monthly buys of about $1,000 each — a total of 28 purchases (including four buys in which we bought a company for a second time).

Medtronic was our first acquisition of 2019, and my Jan. 12 article explained why I considered the Ireland-based medical-device company a good investment.

After executing the Jan. 15 purchase on Daily Trade Alert’s behalf, I tried to set up automatic dividend reinvestment as mandated in the IBP Business Plan, and I was surprised to receive this notice:

Your request to change the dividend reinvestment instructions for this security was not accepted because this security is ineligible.

I later learned that the brokerage DTA uses for the portfolio, Schwab, does not allow automatic “dripping” for companies headquartered outside the United States.

(Many other brokerages, such as Vanguard and Fidelity, do reinvest dividends of foreign companies, so check with your brokerage if this is an important consideration for you.)

My first thought was, “OK, I will just use the dividends toward other stock purchases.” Upon further reflection, however, I realized it would take a long, long time before the dividends generated by the 12-share MDT position would amount to enough to buy much of anything. That’s why I believe investors with relatively small portfolios are better off dripping.

Although an inability to reinvest dividends is not listed as a reason, and although I still consider Medtronic a fine company, I decided that holding it would interfere with the way I want to manage the Income Builder Portfolio … so I divested our stake on Friday, March 1. 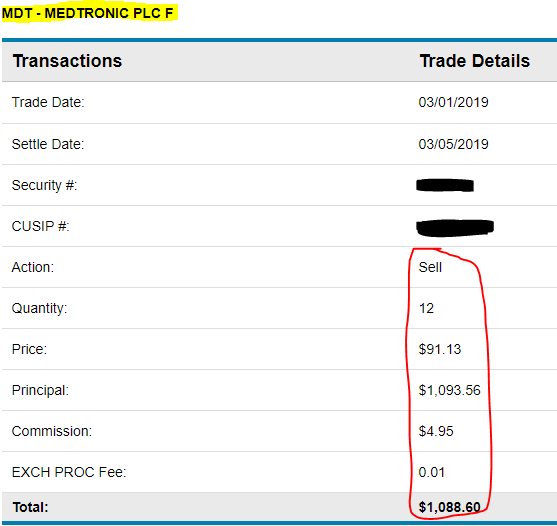 Using the proceeds from the sale — and a little extra money that was available because we had not spent all $28,000 that Daily Trade Alert had allocated for our first 28 buys — I executed a purchase order for 6 shares of Home Depot. 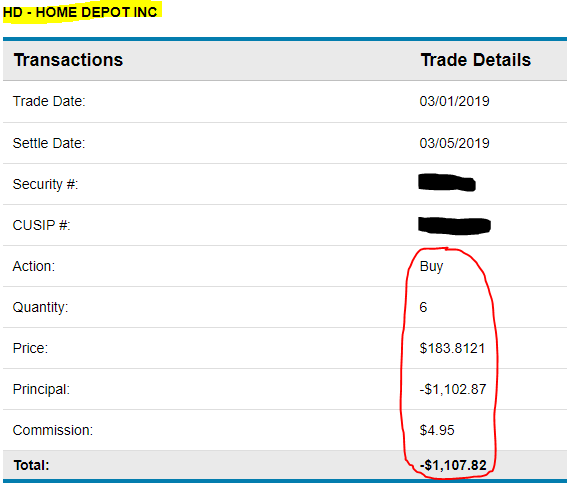 Actually, I should say 6 more shares of HD, as we initiated our position in the world’s largest home improvement retailer back on Oct. 19.

Having explained why I selected Home Depot for the IBP less than 5 months ago, I will share the link to that article HERE rather than rehash everything I said then.

Since then, Home Depot has had two more outstanding earnings reports, highlighted by growth in earnings, sales, operating cash flow, return on assets, return on equity and return on invested capital.

Nonetheless, after the Feb. 26 earnings call, HD shares sold off — with the price declining nearly 4% at one point during the day — as investors apparently were disappointed with cautious 2019 guidance of 3% growth in earnings and sales.

The main thing I took out of the report, however, was this statement from CEO Craig Menear:

As a demonstration of the confidence in the business going forward, today our board announced a 32% increase in our quarterly dividend to $1.36 cents per share. The board also authorized a new share repurchase program of $15 billion …

Since freezing its dividend for a few years during the Great Recession (as opposed to cutting or eliminating the dividend, as many companies did), Home Depot has been increasing its payout to shareholders at a breakneck pace. 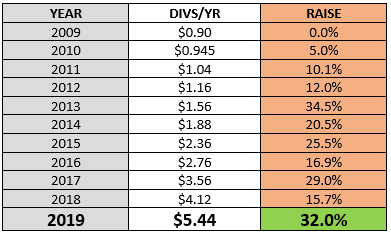 Take a look at that beautiful chart above. Since the recession ended, Home Depot’s annual dividend has increased a staggering 500%. Yowsa!

While I was in no special hurry to sell Medtronic and buy shares of another company, I decided to act when I saw Home Depot fall to a more attractive price even as it raised its dividend by 32%.

The buyback plan is icing on the cake, as HD continues to reduce share count.

The doubling of our HD position, to 12.034 shares, has made it the No. 3 income producer in the IBP, behind only Altria (MO) and Pepsi (PEP). It also is now the largest of the portfolio’s 23 positions by market value.

Even though 2019 guidance did not quite meet expectations of some “experts,” the following Thomson Reuters survey indicates that analysts remain high on Home Depot.

The Morningstar Investment Research Center shows HD with a trailing P/E ratio of 19 and forward P/E ratio of 18.2, both of which are lower than the company’s 5-year average P/E of 23. 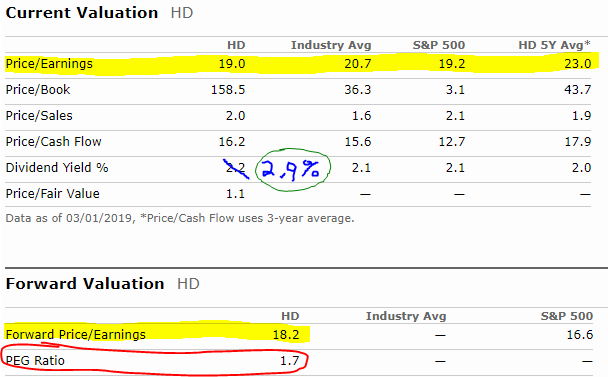 Normally, I prefer retailers with P/E ratios lower than 16, but I like HD’s 1.7 PEG ratio (which incorporates a company’s anticipated growth).

I also appreciate that HD isn’t your run-of-the-mill retailer; unlike most big-box stores, Home Depot stands up very well to Amazon and other e-commerce operators.

Besides, just about every time Home Depot’s P/E ratio has fallen below 20 in recent years, it has proven to be an outstanding company to purchase.

That’s double the growth of the S&P 500 Index over the same span … and that’s nothing new, as HD has been outperforming the overall market for decades. 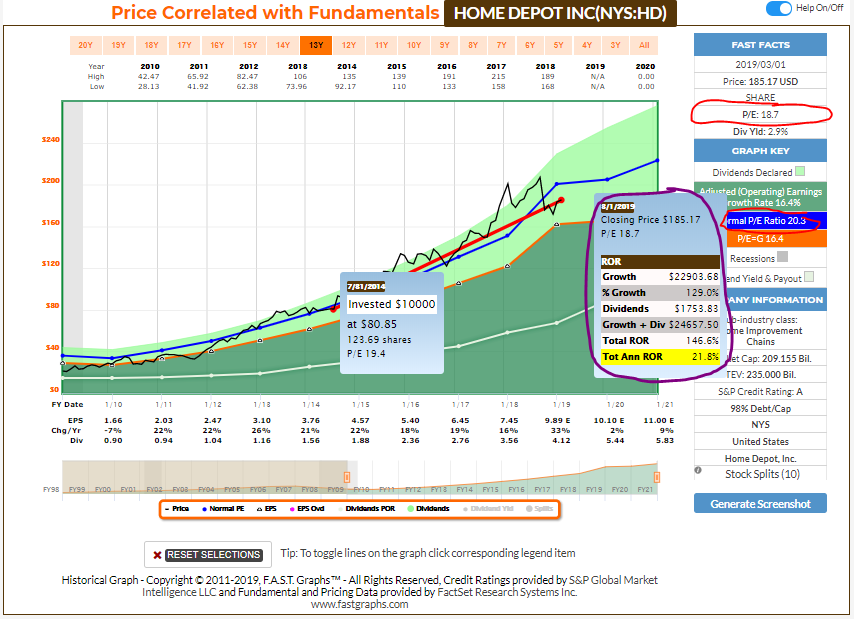 As a bonus, the red-circled area on the FAST Graphs image shows that the “blended P/E ratio” of 18.7 is favorable compared to the norm of the last decade (20.3).

So while I won’t try to pretend that HD is “cheap,” it is fairly valued. And historically, purchasing HD stock at fair value has worked out quite well for long-term investors.

With Johnson & Johnson (JNJ), Amgen (AMGN) and AbbVie (ABBV), the IBP has a strong health-care presence despite the sale of MDT.

Meanwhile, I am very comfortable doubling our position in Home Depot, a high-quality company with impressive dividend growth.

Some folks might disagree with my reason for selling Medtronic … and that’s A-OK. Each investor should have his or her own goals and should manage his or her portfolio accordingly.

After all, the purpose of the Income Builder Portfolio is not to persuade others to replicate what we do but to present useful concepts and interesting ideas.