While researching stocks for the investing articles I write, I occasionally end up realizing: “Hey, that company is one I should own, too.”

Such has been the case with BlackRock (BLK).

Twice in the last three months, I have selected the world’s largest asset-management company for DTA’s Income Builder Portfolio.

The first buy was back on Nov. 16 … and the portfolio just doubled its stake on Tuesday, Feb. 26, when I executed another 2-share purchase on Daily Trade Alert’s behalf. 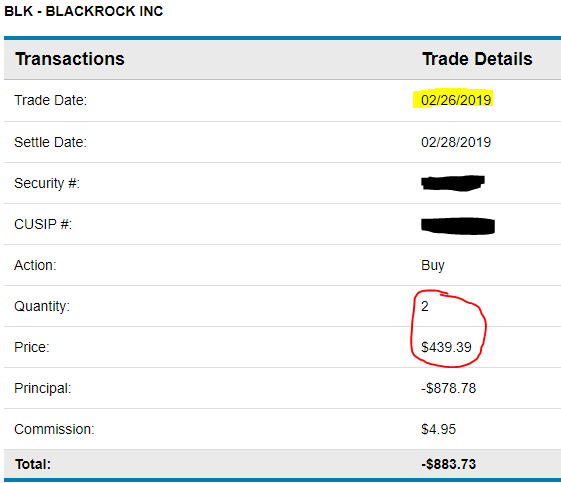 This is the fourth article I have written about BLK, a company about which I knew little before I started researching it for DTA.

That information-gathering process, together with me monitoring the IBP’s BlackRock position since November, has led me to believe it also would be a good fit for my personal portfolio. So I bought a starter stake for myself, paying the exact same price DTA did.

BLK is one of the very few Financials I own, and it is the IBP’s only stock from that sector. I tend to tread lightly in Financials because recessionary times can bring extreme pain. 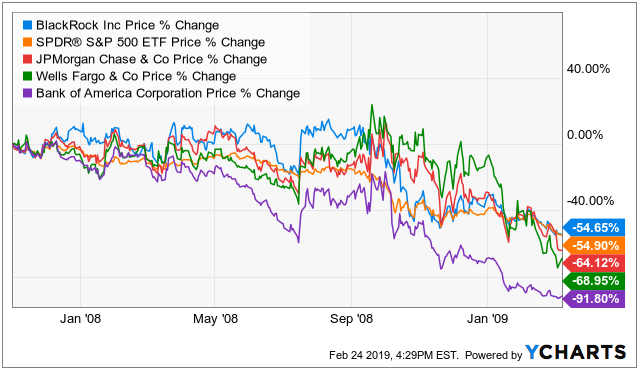 As you can see in the above chart, BlackRock fared much better than major banks did during the Great Recession. BLK nonetheless suffered about the same drawdown as the S&P 500 Index, which couldn’t have been pleasant for its shareholders back then.

While the big banks slashed their dividends significantly in the aftermath of the last recession, however, BlackRock actually gave its shareholders a huge raise. 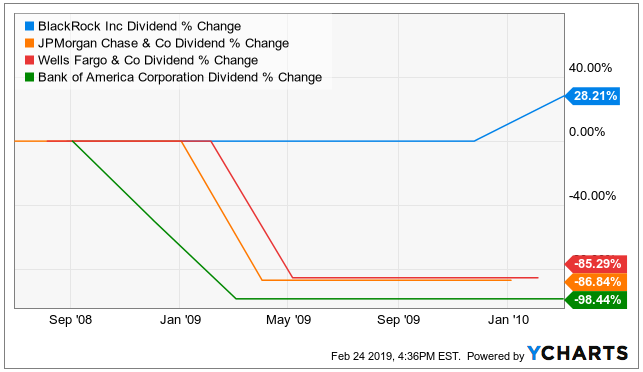 And the company has been hiking its dividend ever since.

The graph below shows BlackRock’s annual dividend growth, with the 2019 full-year payout projected to be $13.20 based on the $3.30 already declared for Q1. (Then again, BLK surprised investors with two raises in 2018, so who knows how high it will go before 2019 is done?) 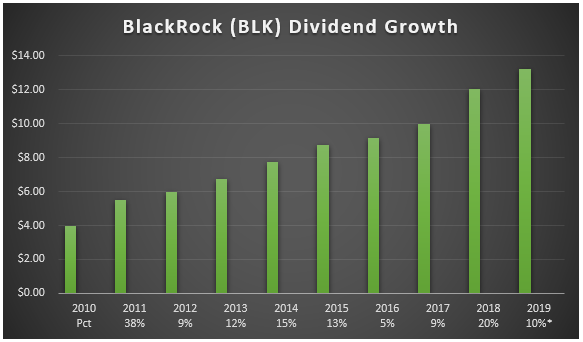 The Business Plan requires that all income produced gets invested right back into each company (a procedure informally known as “dripping”), so the BLK payout will buy about .03 of a share if the price is relatively unchanged.

And on and on the dripping will go every quarter, with more and more INCOME arriving to BUILD the position gradually.

Hey … that sounds like a great name for a PORTFOLIO!

In general, analysts are bullish on BlackRock, as indicated by the following Thomson Reuters survey of 14 of them.

Credit Suisse’s analysts say BLK is the industry leader, and they have assigned a target price of $532. 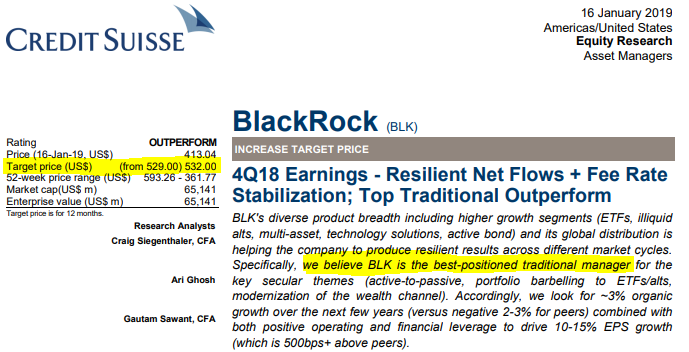 CFRA says that within the next year, BLK’s price should hit $485.

Although the previous image from CFRA indicates its analyst’s belief that BLK’s price will go up, she feels it is a little overvalued now. 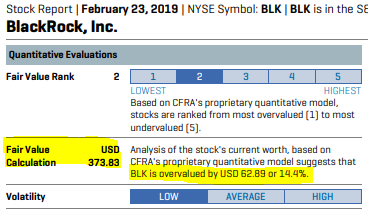 According to Value Line’s “Relative P/E” — which compares one stock to the 1,700 it covers, with 1.00 being fairly valued — BlackRock is priced just about right. VL also says BLK can appreciate about 20% to 60% over the next 3-5 years (blue-circled area).

Using a 20-year view with the FAST Graphs fundamentals analyzer, BlackRock is significantly undervalued. That is indicated by both the current P/E ratio relative to the normal P/E, and by the way the end of the black price line falls well below the blue normal valuation line. 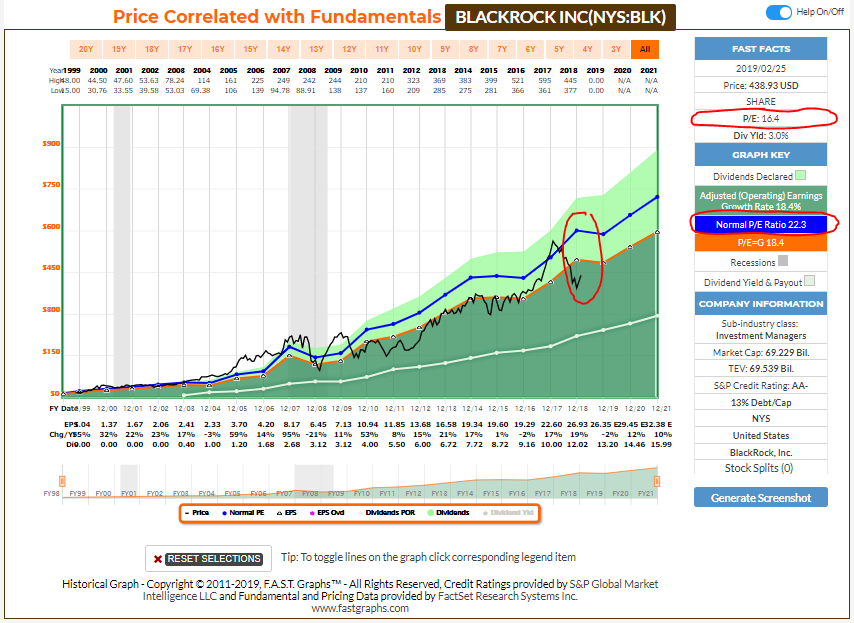 A FAST Graphs look at only the last decade shows that BLK is historically undervalued but by not as much as the long-term view portrayed. 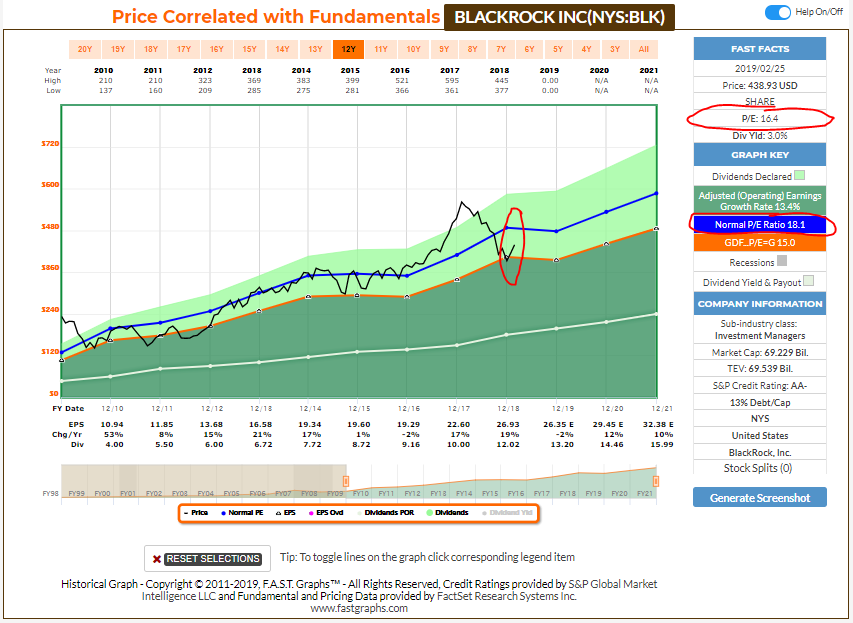 Even though we now have bought BLK twice for the IBP, the position makes up only about 6% of the portfolio by both dollar value and income produced.

And that percentage figures to go down; we will be making 20 purchases of other companies in 2019, and we are unlikely to add any additional BlackRock during that time.

Financials make up an even smaller percentage of my personal portfolio, so I was comfortable getting some “skin in the game” by buying BLK.

Having said that … just because I believe BlackRock is a fine company that fits both my situation and the Income Builder Portfolio, it does not mean BLK is right for everybody.

That’s why I highly recommend that investors conduct their own due diligence, and that they also thoroughly review their goals and guidelines before making any stock purchase.