Just so there’s no confusion, I am about to make a point by briefly discussing a stock I have NOT selected as the next purchase for DTA’s Income Builder Portfolio.

Kraft Heinz (KHC) reported earnings after market close Thursday, Feb. 21, and it was so ugly that the word “ugly” should sue for being associated with the company.

The report included: a significant failure to meet expectations in both profits in sales; news of a federal investigation into the firm’s accounting policies; acknowledgement that many of the company’s best-known brands have lost traction with consumers and retailers; and downward guidance for 2019.

As if that garbage sundae wasn’t sickening enough, Kraft Heinz executives put a rancid cherry on top in the form of a 37% dividend cut. 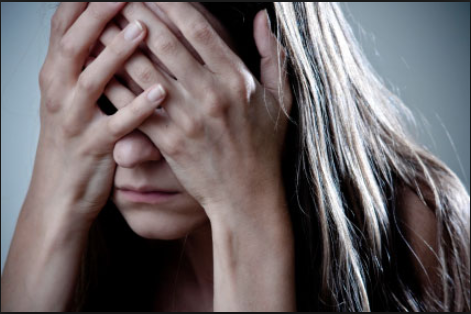 Unsurprisingly, Mr. Market wasn’t thrilled about all of that; shares were pummeled Friday, falling an incredible 27.5% in the session.

So if I’m not choosing KHC for the IBP, why even bring all of this up?

Because I wanted to illustrate that I’m working hard to avoid such companies.

I’m focusing on high-quality businesses with sound fundamentals and leadership positions in their industries.

And since the IBP is an income-centric portfolio built mostly using the Dividend Growth Investing strategy, the strength and safety of the dividend is paramount.

Our next investment will be BlackRock (BLK), the largest asset management company in the world.

If you’ve been following the Income Builder Portfolio’s progress, that name should sound familiar, as we initiated a BlackRock position on Nov. 16.

Since paying about $405 per share for our stake, the value of the IBP’s position has increased about 7%. The S&P 500 index is up about 2% over the same span.

Come Tuesday, Feb. 26, I will execute a purchase order on Daily Trade Alert’s behalf that will roughly double the BLK stake within our 24-stock portfolio.

Fundamentally, little has changed about BlackRock in the 3 months since I first chose the company. So rather than bog this down with a rehash, I recommend you check out my Nov. 14 article HERE.

Here’s one thing that has changed: BlackRock increased its dividend yet again, for the third time in a 12-month span.

Thanks to those increases, the yield is still over 3% even though the share price has appreciated nicely.

While all of that is fine and dandy, it’s not very meaningful if the company isn’t performing well and if the dividend isn’t reliable … which is why I began this article with a look at the Kraft Heinz situation.

As KHC’s brands weakened, its debt grew and its finances struggled, its share price went down. That, however, made its yield rise above 5%, tempting many investors.

Our friends at Simply Safe Dividends actually foresaw some of the company’s problems about a year ago, dropping KHC’s “dividend safety” score to 58 — within the 41-60 range that SSD considers only “borderline safe.”

As time went on and one mediocre financial report followed another, SSD kept lowering the score — finally settling on 41 this past November, and recommending that conservative investors look elsewhere.

Despite those warnings, I held onto KHC in my personal portfolio. Thankfully, it’s not a very large position for me … and it’s getting smaller all the time — ha! Anyway, that’s on me, and it’s another article for another time.

Here’s what Simply Safe Dividends has to say about BlackRock’s dividend safety:

I value Simply Safe Dividends, but no ratings system is perfect and that’s why I do further research.

For example, I took a look at Morningstar Financial Research Center’s cash flow chart, and I liked what I saw. 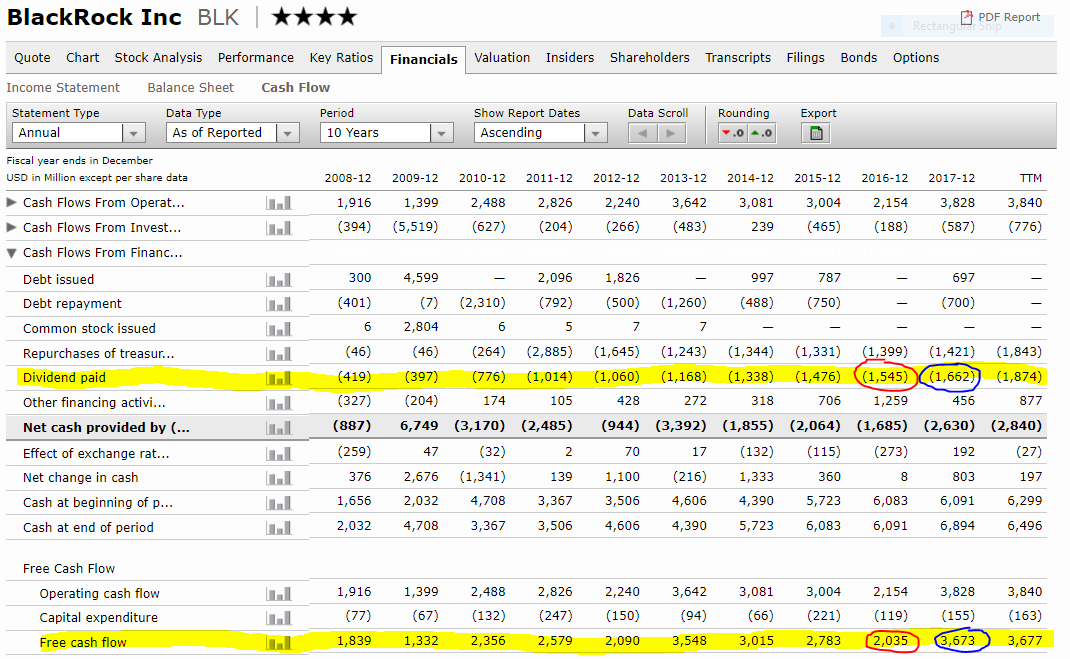 In each of the last 10 years, BlackRock’s free cash flow has easily covered its dividend, often by a more than 2-to-1 ratio.

In 2016, the dividend took up a pretty high percentage of the FCF (red-circled areas), but by the following year, the margin was again more than double (blue).

This tells me that BlackRock has a long history of not overextending itself to pay out its dividend.

Obviously, there are non-dividend-related reasons to buy any stock, and that’s true of BlackRock, too.

I like its deep moat (competitive economic advantages over peers), its history of growth, its projection of future growth (especially from 2020 on), and a management team that Morningstar calls “Exemplary.”

As Morningstar analyst Greggory Warren said in his most recent report:

Unlike many of its competitors, the firm is currently generating solid organic growth with its operations, with its iShares platform, which is the leading domestic and global provider of ETFs, riding a secular trend toward passively managed products that began more than two decades ago. This helped the company maintain above-average levels of annual organic growth despite the increased size and scale of its operations. Although we expect the secular and cyclical headwinds to make assets under management (AUM) growth difficult for the U.S.-based asset managers over the next five to 10 years, we still see BlackRock generating 4%-5% average annual organic AUM growth, with slightly lower levels of revenue growth but steadily improving margins (albeit range-bound between 39% and 41% of revenue) during 2019-23.

I also like that BlackRock shares appear to be trading at a reasonable level, and I will go into valuation in more detail in the post-buy article that will be published on Wednesday, Feb. 27.