One of my best investing ideas ever was not really one of my “best ideas” when I came up with it three years ago.

If that sounds a little convoluted, stick with me while I explain …

Famous stock-pickers such as Warren Buffett and Charlie Munger often refer to “conviction” investing: Choose the 5 or 10 or 20 companies you feel strongest about, invest heavily in them, and hold them for a long time.

It’s how they built their vast personal fortunes, and it’s how they have made Berkshire Hathaway (BRK.A, BRK.B) one of the most successful enterprises ever.

There certainly is a lot of common sense to that concept.

Why should I diversify just for the sake of diversification?

Nevertheless, the skeptic (and pragmatist) in me asks this question: What if I don’t know whether a company will be one of my best ideas until well after the fact?

To illustrate what I’m getting at, I’ll talk about one of the stocks I own: Boeing (BA).

For both my personal portfolio and for the Income Builder Portfolio that I’m putting together for Daily Trade Alert, I keep watch lists of companies I am considering.

As 2015 ended, Boeing was not on my list. I already owned 40-plus stocks, including several industrial names, and I was in no rush to increase that number.

During its earnings call on Jan. 27, 2016, Boeing’s executives said the company needed to reduce production for the near-term to gear up for what they expected to be great long-term success.

Investors focused on the short-term view (as is often the case) and flocked to the exits – and the price tanked some 10% from the previous day’s close.

Even though it wasn’t on my watch list, I considered Boeing a high-quality company, and I loved the 19.8% dividend raise the company had announced the previous month.

I also love a bargain, and after doing a couple hours of research, I decided to buy a chunk of BA at $115.13 per share. 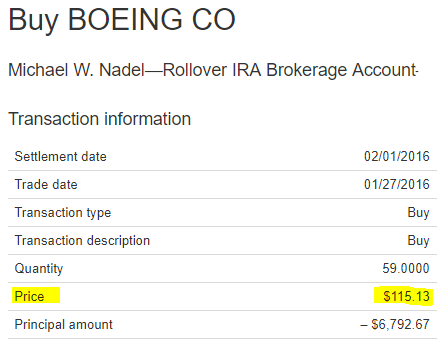 Then, on Feb. 11, Bloomberg reported that the Securities and Exchange Commission was investigating Boeing due to some possible accounting irregularities … and the price tanked again, falling as much as 12% during the day.

Over the years, I had noticed that companies with strong balance sheets and proven business models almost always recovered from price declines caused by similar SEC inquiries. So with my daughter Katie in the early stages of building her Dividend Growth Investing portfolio, I encouraged her to take advantage of the pullback. She bought 34 shares at $110.35 each. 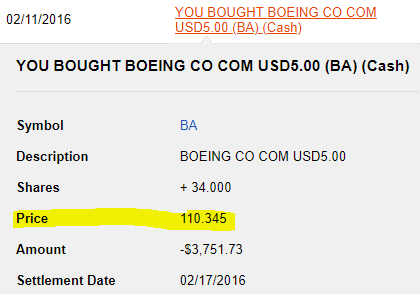 Deciding that she shouldn’t have all the fun — and watching the price retreat still more that afternoon — I doubled down on my Boeing position at $105.05.

Over the ensuing weeks and months, Boeing’s price slowly moved higher. Thinking it was still reasonably valued, I bought a little more that summer at $130.39.

Boeing ended up not having to reduce production as much as it had anticipated, the industry strengthened, and the SEC probe proved to be inconsequential.

One great earnings report followed another, and BA’s price started soaring like one of the F-15 fighter jets it produces. 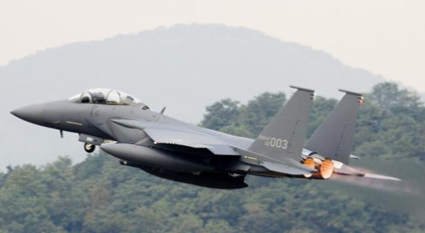 I kept reinvesting the dividends, taking another small bite of Boeing stock every March, June, September and December. In the process, I built what is now a nice-sized stake.

When 2016 began, I knew Boeing was a major player in a cyclical industry, one whose volatility concerned me a little. I also knew that it had been a fairly reliable dividend grower over the years but that it did have to freeze its payout for a couple of years after the Great Recession.

So although I knew it was a “good” company, I did not consider it one of my best ideas compared to Dividend Aristocrats I already owned, such as Johnson & Johnson (JNJ), 3M (MMM), Pepsi (PEP), McDonald’s (MCD) and Procter & Gamble (PG), or companies I wanted to own, like Home Depot (HD), Nike (NKE) and Visa (V).

Well, as it turns out, Boeing has been one of my best ideas ever. This week, its price moved above the $400 mark — meaning that in 3 short years, my investment has gained about 250%. 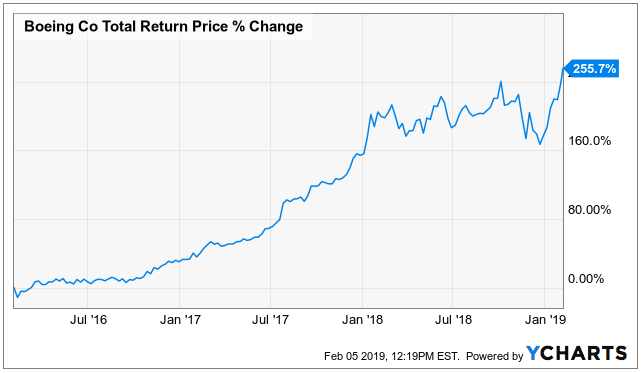 In addition, Boeing’s dividend has been raised 4 times in that span by a total of 126%, so BA also has been a solid income-producer for me.

This article isn’t a recommendation to buy Boeing, a high-flying stock that is no longer a bargain.

Nor is it about taking speculative positions while ignoring one’s “best ideas.” Boeing was (and is) a fundamentally sound company with a wide moat and great history.

Nor is this article saying, “Know which stocks will go up 250% in 3 years and buy them.” If that were possible, I’d invest only in those companies — and folks would be quoting me instead of Warren Buffett and Charlie Munger.

Basically, my message is this:

Keep an open mind, because a new idea might turn out to be a “best idea.” 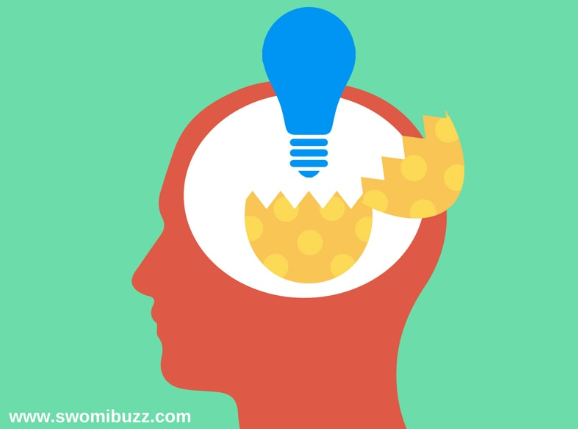 It would have been easy for me to ignore Boeing 3 years ago. But I followed the news, I researched the company thoroughly, I assessed the risk/reward dynamic, and I made an informed decision to buy a blue-chip company when Mr. Market put it on deep discount.

I’d call that one of my very “best ideas” … even if I didn’t know it at the time.