It often seems we’re a nation of hypochondriacs — always looking for the next cure to something that ails us, or at least something that we perceive is ailing us.

Ear ache? There’s gotta be a pill for that. Stiff back? Go get an “adjustment.”

Do the kiddies have a few sniffles and sneezes? Alert! Alert! Rush ’em to urgent care!

As a society, we’re getting older and fatter and sicker … and more addicted to the idea of finding both the fountain of youth and the magical cure.

Is there any wonder that health care is one of my favorite sectors as an investor — not just for my personal portfolio but for the one I am building here at Daily Trade Alert?

Upon launching the Income Builder Portfolio a year ago, my very first selection was biotechnology giant Amgen (AMGN). Our most recent buy was AbbVie (ABBV), maker of the world’s best-selling drug, Humira. In between, we acquired shares of health-care conglomerate Johnson & Johnson (JNJ), a long-time favorite of the Dividend Growth Investing crowd.

The sector appeals to me because it is considered “defensive” — in good times or bad, people will try to take care of themselves and their families the best they can.

Which brings us to the first company the IBP will add in 2019: Medtronic (MDT).

Come Tuesday, Jan. 15, I will execute a purchase order for about $1,000 worth of shares in the Ireland-based medical-device company.

Rather than spend several paragraphs explaining Medtronic’s business, I will present this very detailed slide that the company featured recently at the J.P. Morgan Health Care Conference: 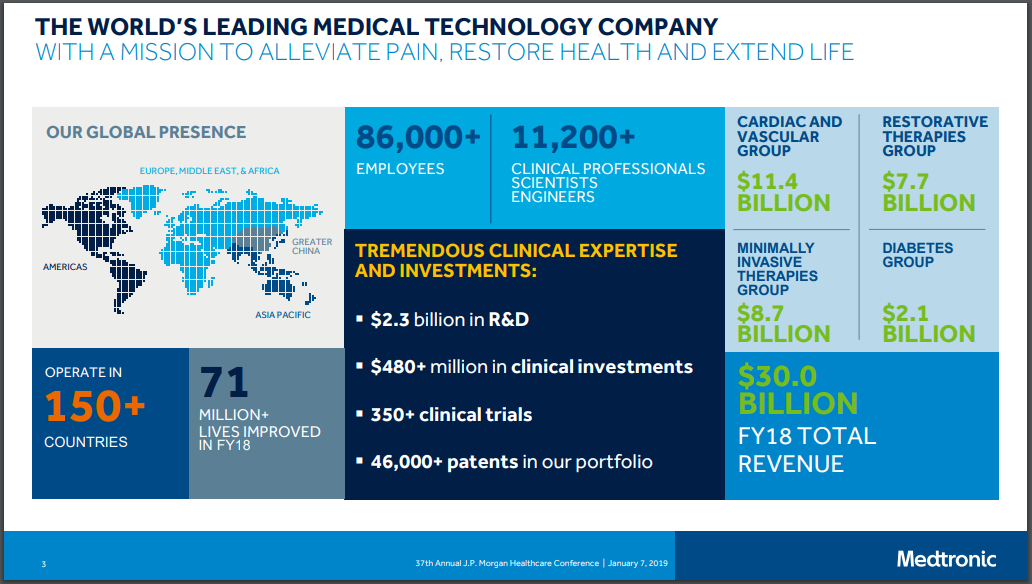 As you can see, Medtronic has four divisions that each makes billions of dollars in annual sales. While Johnson & Johnson is a major player in the industry, MDT is the world’s largest stand-alone medical-device maker.

Medtronic is a business with a “wide moat” (competitive economic advantage) because other companies would face significant cost and regulatory hurdles if they tried to challenge MDT’s diverse portfolio of products.

Supplying medical devices to hospitals, clinics and doctors is not like, say, opening a food truck that sells fried cheese curds. Everybody can’t do it.

New competitors sometimes pop up on the margins, ranging from less sophisticated (discounted prices) to high-end (technological advancements), but they rarely result in monumental market shifts. The existing players’ positioning is very defensible, with most practitioners rarely switching to competitors’ products because of inertia as well as up-front training costs. While surgeons’ influence over procurement decisions is arguably waning, the established players also have administrators’ ears.

That deep moat has helped MDT steadily grow earnings per share over the years, as the following graphic from Simply Safe Dividends shows: 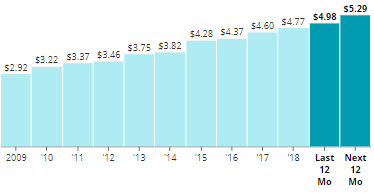 In addition to its own innovations, Medtronic adds to its product line by making major acquisitions.

A huge one took place four years ago, when MDT paid nearly $43 billion for Covidien, the market leader in numerous highly profitable surgical devices such as those used for weight-loss surgery and laparoscopic procedures. 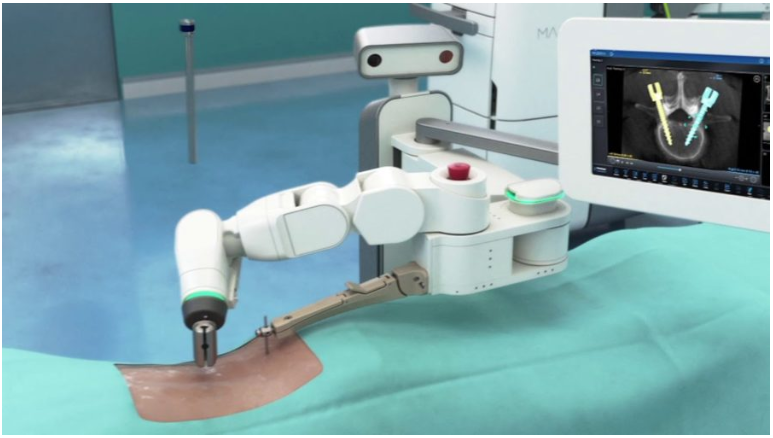 A dominant international player with operations in 160 countries, Medtronic is building a large presence in China. MDT generated approximately $1.5 billion in sales there last year, and in 2020 it will be opening an “Innovation Center” in Chengdu.

Medtronic has received Value Line’s highest scores for Safety (1) and Financial Strength (A++), and it gets a solid A credit rating from Standard & Poor’s. And check out this “Financial Sonar” from Jefferson Research: 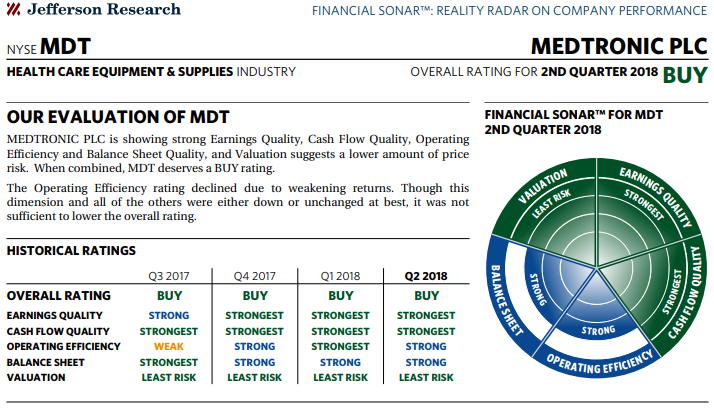 Because building a reliable, growing income stream is the IBP’s primary mission, it is comforting to know Medtronic is a Dividend Aristocrat that has been increasing its annual payout to shareholders since Jimmy Carter was shellin’ peanuts in the White House. 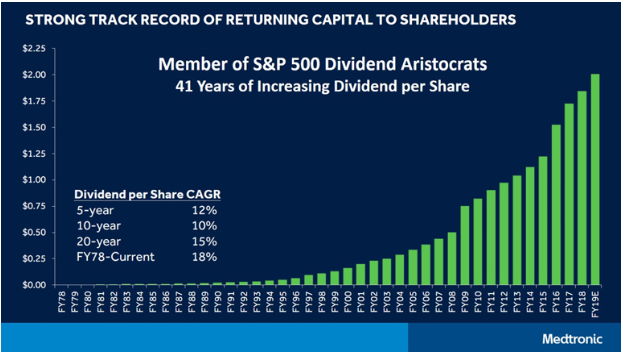 Most recently, Medtronic raised its dividend 9% last spring. Its yield is now about 2.4%, a multi-year high.

As is the case with most health-care corporations, Medtronic occasionally must deal with uncertainty related to politics and regulations. Thankfully, medical devices are not as easy targets for politicians as drugs are. The company also has faced a few lawsuits and recalls over the years.

No stock is “safe,” but MDT’s business is dependable and not cyclical.

It’s unlikely that any of us will call in the Navy SEALs just because we have the a stuffy nose, as another verse of Jennifer’s Cold suggests, but we desperately want to keep ourselves and our loved ones as healthy as possible.

Medtronic is positioned very nicely to take advantage of the fact that we are getting older, fatter and sicker, and I am very comfortable making it the Income Builder Portfolio’s fourth health-care holding and 22nd position overall.

My article about the execution of our MDT purchase, along with some pertinent valuation information, will be published Wednesday, Jan. 16.