Welcome back to the Valuation Zone, and our first well-valued dividend growth stock for 2019.

This month we go into the Finance sector and the Capital Markets industry. The company is BlackRock (BLK), which bills itself as the leading global investment/asset manager.

BlackRock serves many of the world’s largest companies, pension funds, foundations, and public institutions, as well as millions of individual investors. It may be best known among individuals for its iShares collection of ETFs (exchange-traded funds). There are more than 800 of them.

Here is BlackRock’s Quality Snapshot. To create this, I use:

As you can see, BlackRock is a very high-quality company. It is one notch down from the top rating level on the first two metrics, and in or near the top level on all the others.

It has raised its dividend for 9 straight years.

That’s not very long, and it doesn’t span a recession.

On the other hand, BlackRock has existed as a public company only since 1999, and it has paid a dividend for 15 straight years, which does span the Great Recession.

Simply Safe Dividends considers BlackRock’s dividend to be very safe and unlikely to be cut.

Dividend growth has been fast over the past few years: 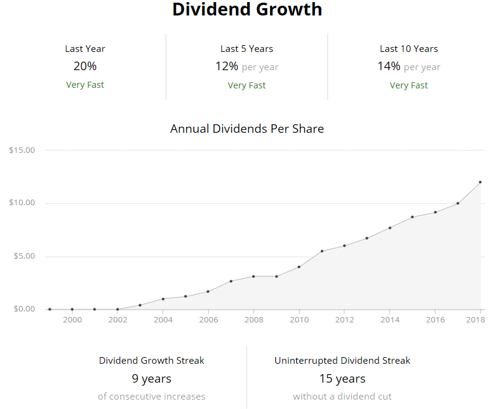 To value a stock, I use four different methods, then average them out. For more details, see Dividend Growth Investing Lesson 11: Valuation.

The fair value reference line is shown in orange line on the following graph, while the black line is BlackRock’s actual price. I’ve circled the stock’s actual current P/E ratio. 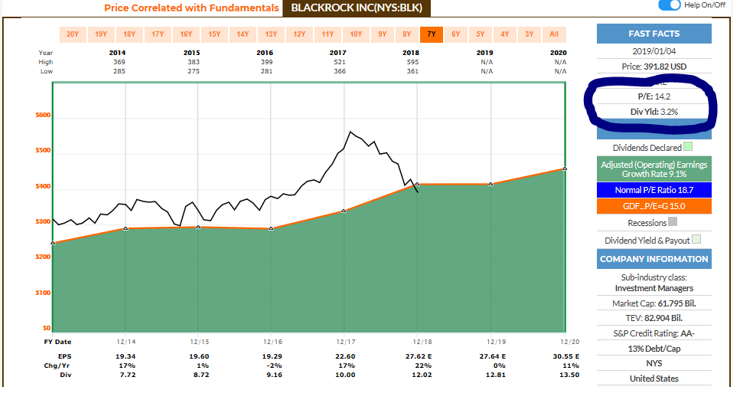 Under this method, BlackRock is slightly undervalued, because its actual price is just below the orange reference line. You can see that its price declined pretty much throughout all of 2018.

That translates to BlackRock being 5% undervalued. I consider anything within +/- 10% to be “fairly valued,” because valuation assessment are estimates, not physical traits.

I round prices off to the nearest dollar so as not to create a false sense of precision.

In this step, we “normalize” the comparison to make it specific to the stock’s own long-term valuation rather than to the market as a whole. 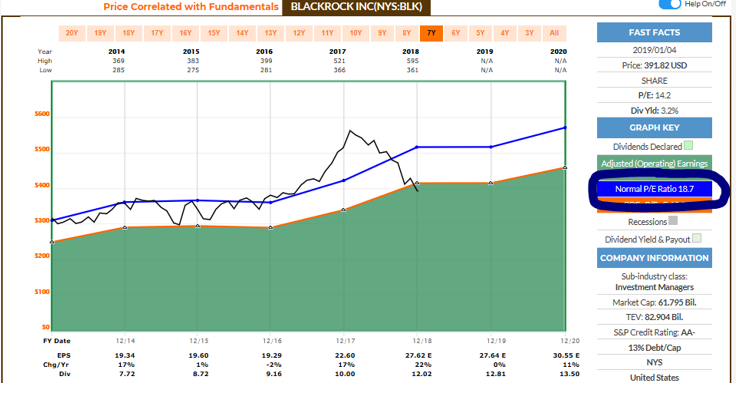 This 2nd step changes the picture. BlackRock’s 5-year average P/E ratio of 18.7 is quite a bit higher than the 15 that was used in the first step.  You can see that the stock was significantly overvalued in early 2018, before it began its price decline.

Morningstar takes a different approach to valuation. They ignore P/E and other conventional valuation ratios.

Instead, they use a discounted cash flow (DCF) model. Using conservative estimates for future projections, they discount all of the stock’s estimated future cash flows back to the present to arrive at a fair value estimate. (If you would like to learn more about how DCF works, check out this excellent explanation at moneychimp.)

On Morningstar’s 5-star system, 4 stars means that they think BlackRock is undervalued. Specifically, they see it selling at a 22% discount to fair value, which they calculate at $500 per share.

If a stock is yielding more than its historical average, that suggests that it is a better value than usual, because you are “paying less” for the stock’s dividends. You can buy more shares with the same amount of money. Because dividends are paid per share, you will get more dividends for your purchase money. 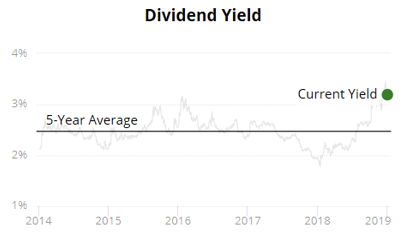 To calculate the degree of discount, we again form a ratio, this time of the yields:

That would suggest 22% undervaluation. When I use this yield comparison, I cut off the ratio at 20%, because this is the least direct way to estimate stock valuations, and I want to be conservative.

The average of the 4 fair-price estimates is $480, compared to BlackRock’s actual price of about $392. That’s an 18% discount to fair value, suggesting that there is quite a bit of a margin of safety for someone buying the stock now.

BlackRock is selling for an attractive price right now. It is a high-quality business with a nice yield (3.2%) and a solid (if short) dividend growth record.

That said, it’s in the asset-management industry of the finance sector, which can be notoriously fickle.

Here’s what Morningstar has to say in its Bulls / Bears feature (AUM means assets under management): 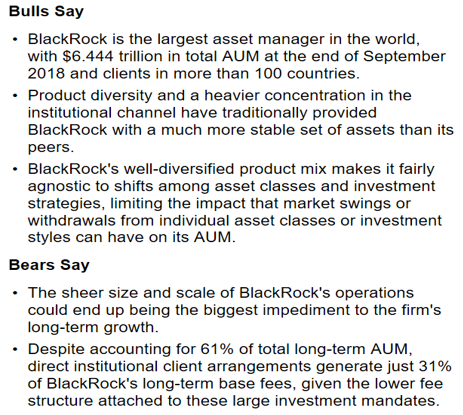 For further insight, two of my Daily Trade Alert colleagues have analyzed BlackRock within the past 3 months:

This is not a recommendation to buy BlackRock. As always, perform your own due diligence. Check the company’s complete dividend record, business model, financial situation, and prospects for the future, as well as its effect on your portfolio’s diversification. And be sure to consider whether it fits (or does not fit) your long-term investing goals.