For years, my mother suffered from rheumatoid arthritis — and yes, those who have this debilitating condition know that “suffered” is the right word.

“Unlike the wear-and-tear damage of osteoarthritis,” the Mayo Clinic says, “rheumatoid arthritis affects the lining of your joints, causing a painful swelling that can eventually result in bone erosion and joint deformity.” 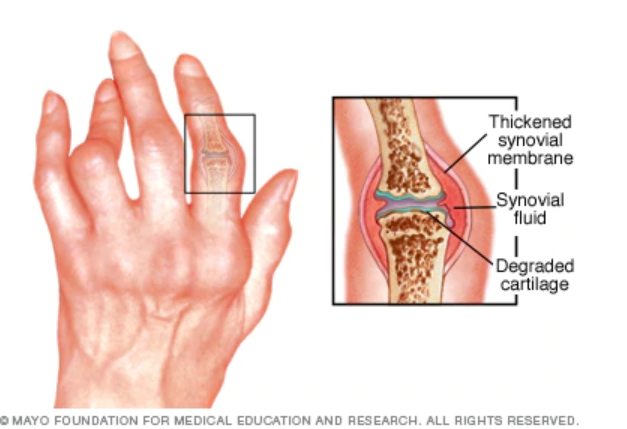 As awful as that sounds (and is), the saddest thing about this chronic autoimmune disorder is that it is incurable.

My mother regularly experienced stretches during which she could barely move her fingers and hands, and her everyday life was a series of aches and pains.

Frankly, it’s a wonder she was able to function, let alone be the loving mom and grandmother she was until she died in 1997 due to heart disease and cancer.

Sorry to start this investing article on such a bummer of a topic, but things do look up some from here.

The Wonder of Humira

My mother never had access to Humira, which has been something of a wonder drug for its maker, AbbVie (ABBV).

In addition to being an effective treatment for rheumatoid arthritis after receiving FDA approval in 2002, Humira is a leading medication prescribed for those with Crohn’s disease, ulcerative colitis, psoriasis and other conditions.

Like rheumatoid arthritis, Crohn’s — an inflammatory bowel disease that can affect the entire digestive tract — also has no known cure.

Humira is the brand name for the “biologic response modifying” drug, adalimumab, and it is the top-selling medication in the world. 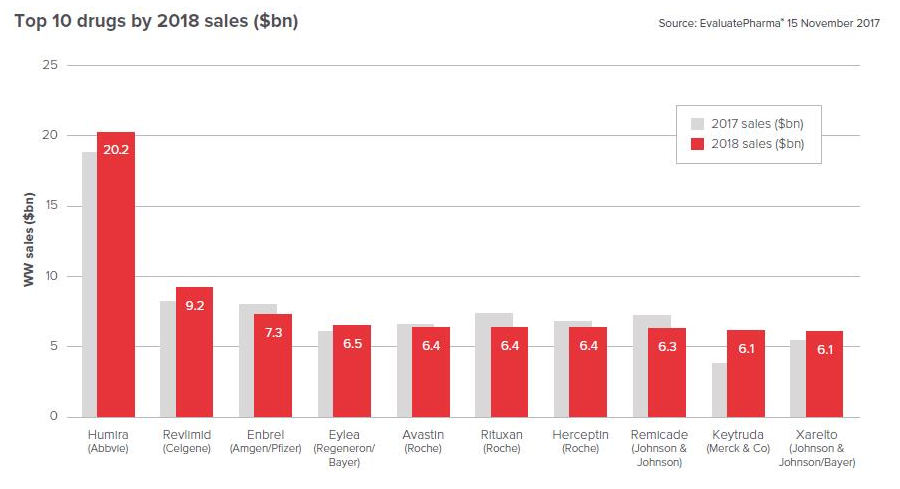 Humira represents some 70% of AbbVie’s profits and 50% of its sales, so any investor who buys shares of ABBV is buying into the drug — at least for the near term.

That certainly is the case for DTA’s Income Builder Portfolio, as AbbVie will become the 21st component of our real-money Dividend Growth Investing endeavor.

On Tuesday, Dec. 18, I will execute a purchase order on Daily Trade Alert’s behalf for about $1,000 worth of ABBV.

Back in 2013, Abbott Laboratories (ABT) spun off its biopharmaceutical arm, and AbbVie has grown prolifically ever since. 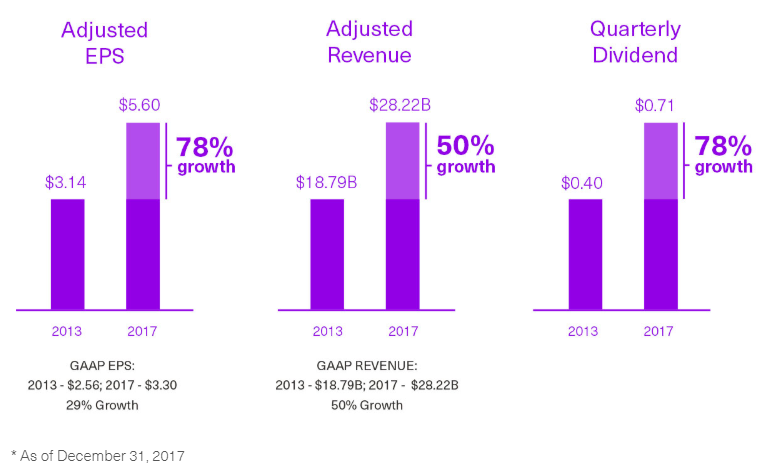 Although Humira has been the driver behind the company’s growth, AbbVie also makes leading blood cancer medication Imbruvica, and its pipeline includes other cancer and immunology drugs. 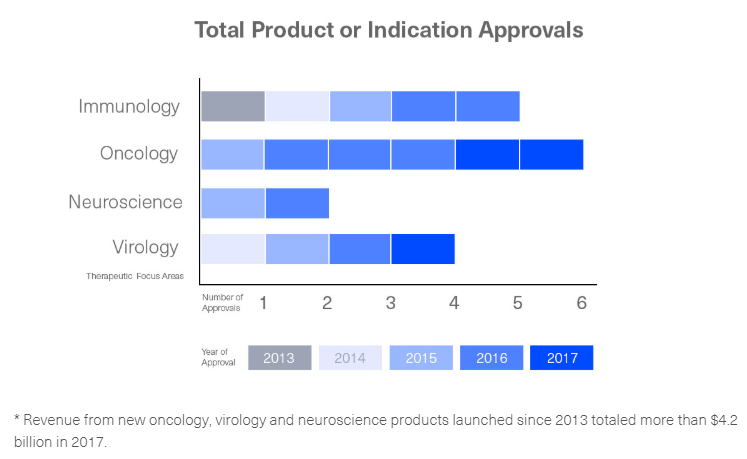 Abbott Labs was a Dividend Aristocrat, with a decades-long history of increasing its payout. That torch has been passed to its “offspring,” AbbVie, which has given shareholders phenomenal income growth these last five years. 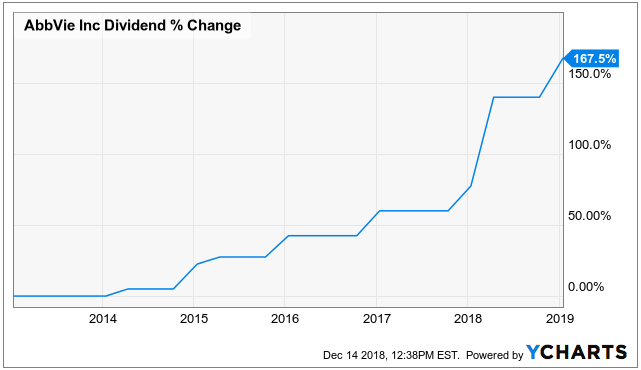 As impressive as the growth looks in the above chart, AbbVie has really been in a divvy-hiking tear over the last year and a half.

Using ABBV’s expected full-year payout of $4.28, it now has a forward yield of 5% — substantial for most companies in most industries, but especially for a quality biopharm stock.

There usually is a reason beyond benevolence that a company offers such an attractive dividend.

Acknowledging some challenges, AbbVie is using the dividend as one method to entice current and prospective shareholders.

Many investors worry that AbbVie is little more than a one-trick pony. And even if that pony gallops as beautifully as Humira has, no pony gallops forever. 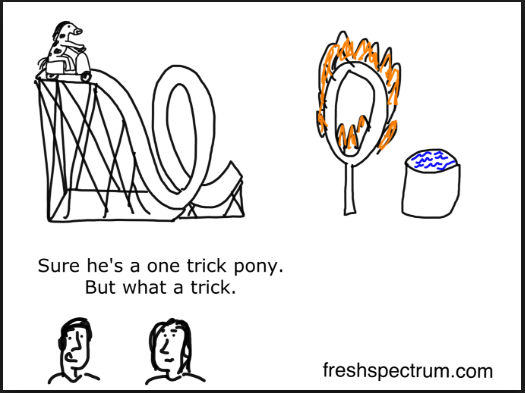 So far, AbbVie has done a wonderful job of keeping competitors from infringing on its Humira territory.

Most recently, it reached an agreement with Pfizer (PFE) to keep that company from launching a Humira biosimilar in the United States before 2023. That matches similar agreements with Amgen (AMGN), Mylan (MYL) and several other competitors.

Still, 2023 will be here before we know it, and the pressure is on ABBV to come up with another true blockbuster drug.

Additionally, ABBV has hurt itself with a few missteps, including a lawsuit over an alleged kickback scheme involving medical personnel, a botched stock tender offer, and a failure to continue developing once-promising cancer drug Rova-T. 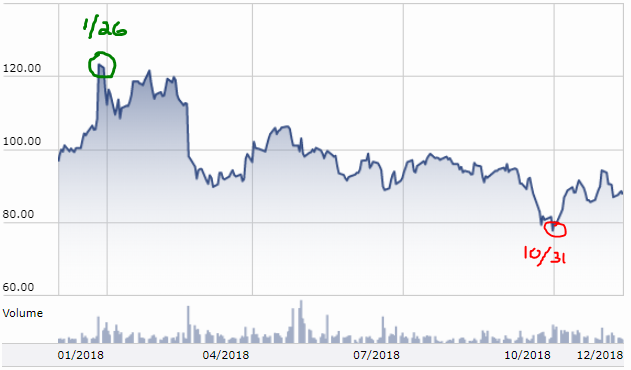 Litigation is common in this industry, and one company’s problem — such as Johnson & Johnson (JNJ) having to defend itself from asbestos-in-baby-powder claims — can bring about industry-wide stock-price action.

And finally, the president and members of Congress have spent a lot of time railing about high drug prices. They haven’t shown much ability to resist lobbyi$t$ or their own worst instincts, but it’s at least theoretically possible that they could come up with industry-unfriendly legislation.

Despite Humira’s ability to provide some relief to those with rheumatoid arthritis and other serious conditions, I know AbbVie is not a perfect company. There is no such thing.

Since being spun off from Abbott, however, it has proven to be a well-run, resilient business.

With a terrific history of dividend growth, AbbVie will be a welcome addition to the IBP. And with a forward P/E ratio of about 10 and a 5% yield, the timing seems about right.

My article about the execution of our ABBV purchase, along with some additional valuation information, will be published Wednesday, Dec. 19.

As always, I strongly encourage each investor to conduct his or her own due diligence.