What to do when one of the most beloved companies in the world is not beloved (at least in the short term) by stock traders?

Well, if it is a high-quality company, if I want to own it (or more of it), if it is available at a reasonable price and if I am building a long-term position … I often look at such a situation as an opportunity, and I buy the dang thing.

Such was the case Tuesday, Dec. 4, when I executed a purchase order to more than double the Apple (AAPL) stake in DTA’s Income Builder Portfolio. 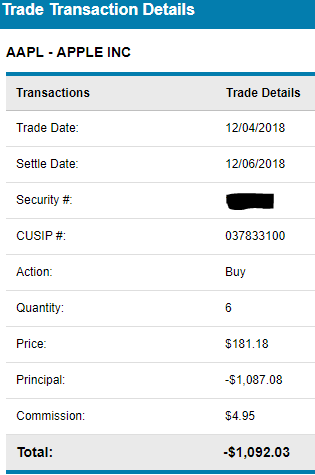 In adding 6 shares at $181.18 each to the 5 we bought back in June, we increased the IBP’s Apple count to 11.0359 shares. (The fraction comes from two dividend reinvestments since the initial purchase.)

Daily Trade Alert allocates $2,000 per month for two IBP transactions, and in a couple of weeks we will make our final 2018 purchase for this real-money, Dividend Growth Investing portfolio.

Having also doubled-up on Altria (MO) and Pepsi (PEP), we now have made 23 buys involving 20 companies.

I will go a little more into the current sentiment around Apple’s stock soon. First, let’s turn to one of my favorite subjects.

Since initiating its dividend in 2012, Apple has given shareholders steady income growth, and the most recent year-over-year increase (14.6%) is the highest yet.

With a payout ratio well under 30% and with oodles of cash on its ledger, AAPL is in great shape to keep taking the dividend higher.

The following graphic from McLean Capital Research shows that Apple always easily covers the dividend with its free cash flow.

Apple’s next quarterly dividend payout of .73 is expected to be Feb. 15, when $8.06 will go into the IBP. That will be reinvested, so the portfolio will acquire another .0445 of a share if the stock price is similar to what we paid Tuesday.

And then it gets even better.

Three months later, AAPL probably will announce its next dividend increase. Conservatively figuring a 10% hike to .80, and taking into account the new share total of 11.0804, it means the payout would rise to $8.86.

Giddyap! That’s why we named this project what we did.

In my previous article, I detailed reasons Apple’s stock price went up in the summer and then pulled back in the fall … and things didn’t stay static even in the couple of sessions after that article published Saturday, Dec. 1.

The market was lifted Monday by reports that Donald Trump and his Chinese counterpart, Xi Jinping, reached a handshake agreement over the weekend for a 90-day “truce” in their trade war.

But fears that Trump had overstated the concessions he had won from Xi knocked the market back down on Tuesday.

That, combined with an analyst’s downgrade, led to Apple’s price falling both before and after I executed the Income Builder Portfolio transaction. AAPL closed the session at $176.74.

And Speaking Of Analysts …

It was HSBC’s Erwan Rambourg, citing “market saturation” and over-reliance on the iPhone, who downgraded AAPL from Buy to Hold on Monday, lowering his 12-month price target 5 bucks to $200.

Generally, though, analysts feel good about the company’s future, as indicated by the following Reuters survey of 42 analysts.

CFRA and Schwab also consider the company to be a Buy, as the next two graphics show.

Apple looks like a pretty solid buy — ranging anywhere from fairly valued to undervalued, depending upon who has done the research. 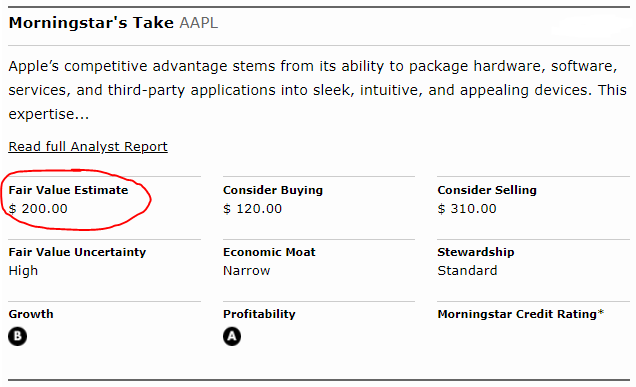 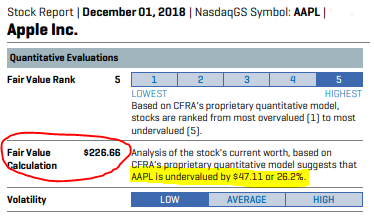 Value Line, which analyzes some 1,700 companies and considers 1.00 to be the average “Relative P/E value,” gives AAPL a 0.73 to indicate undervaluation.

Value Line’s analysts also believe Apple’s price can more than double over the next 3-5 years (blue circled area in the above graphic). No wonder VL has included AAPL on its lists of “Stocks With Long-Term Price Growth Potential” and “Highest Growth Stocks.”

Apple appears to be an eye-popping bargain by the look of the following 20-year FAST Graphs illustration. 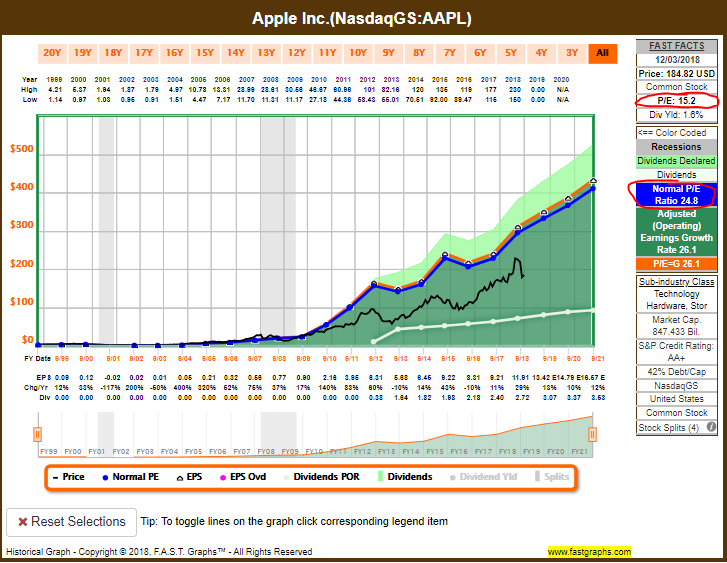 If the time frame is reduced to a shorter period — this decade, for instance — AAPL looks fairly valued. 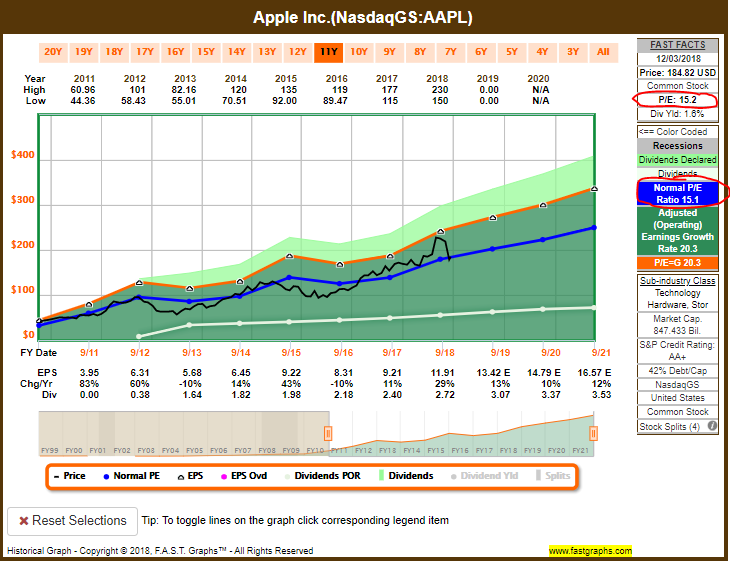 It should be noted that FAST Graphs are updated every morning to reflect the previous day’s close. Once Tuesday’s action is figured in, the P/E ratio falls to about 14.5.

David Zeiler’s recent Daily Trade Alert article, Why — And When — You Should Buy Apple Stock, offers some additional insights.

Nevertheless, the stock price can be pretty volatile — as recent months have demonstrated. Apple often is a victim of the lofty expectations surrounding it; the price can get whacked even after what looks like an outstanding sales and profits statement.

But hey, all of that is short-term thinking … and DGI is a long-term strategy.

I certainly am looking years down the line as I put together the Income Builder Portfolio, and I doubt this will be the last time we add to our stake in this iconic name.