As an investor, I fancy companies that have both a history of growth and a reasonable expectation of future prosperity.

I’m a greedy guy, so I want growth in every department: revenues, profits, cash flow, dividends.

“The whole shebang,” as we used to say in the olden days.

Largely because investment asset manager BlackRock (BLK) fits that description, I selected it as the 20th component of DTA’s Income Builder Portfolio. 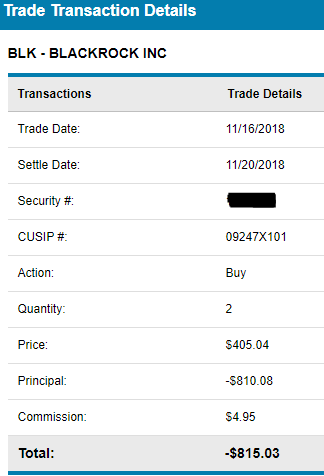 Daily Trade Alert allocates $2,000 monthly for two buys. Having paid about $1,037 for a stake in American Electric Power (AEP) earlier in November, there was not enough cash available to acquire a third share of BLK.

Given that BlackRock is the IBP’s first financial-sector investment and it’s Year 10 of a bull market, I’m fine with starting small and slowly building the position over time.

To be included, Value Line says, “a company’s annual growth of sales, cash flow, earnings, dividends and book value must together have averaged 10% or more over the past 10 years and be expected to average at least 10% in the coming 3-5 years.”

As is the case with any analytical tool or advice, I do not treat this as gospel. But it did mean something to me that BlackRock showed up on the list.

Both the past growth and estimated future growth are circled in red. I also circled Value Line’s “Safety Rank,” which VL says “measures the total risk of a stock relative to the approximately 1,700 other stocks” in its analytical universe.

Nearly 80% of the companies on this list received the “average” Safety score of 3, but BlackRock was one of a handful to get the “above average” rank of 2. Only a few, including current IBP position Starbucks (SBUX), received the highest score of 1.

So if we’re to believe Value Line, BlackRock has a fine combination of historical growth, expected future growth and relatively low risk.

For BLK, one of the main areas of past, present and future growth is the dividend — and that matters, because the IBP is first and foremost a Dividend Growth Investing endeavor.

In the above graphic, one can see the ascension of the dividend in recent years. (I added the projected December dividend to bring the 2018 total to $12.02).

BlackRock, which is yielding 3.1%, has received a near-perfect Safety score of 97 from Simply Safe Dividends. With a comfortable payout ratio of about 45%, there is no reason to believe the company will stop paying — and raising — its dividend for years to come.

In mid-December, BlackRock will pay the Income Builder Portfolio a dividend of $6.26.

The IBP Business Plan requires that all income produced gets invested right back into each company, and the next BLK payout will buy about .015 of a share if the price is roughly the same as now.

Then, three months later, dividends will be paid on the new share total of 2.015.

The company usually announces its annual raise every January, but it gave shareholders a pleasant surprise last July by declaring a mid-year increase. Will there be yet another hike disclosed two months from now? That sounds almost too good to be true! 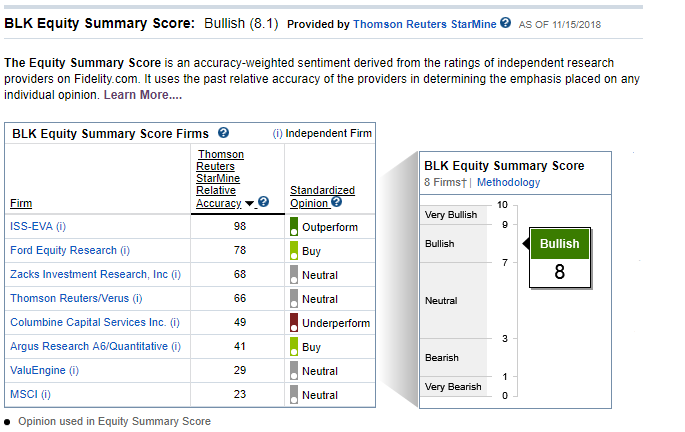 Credit Suisse analysts lowered their 2019 target price for BlackRock, but even the revised estimate of $605 still represents nearly a 50% gain from the IBP’s acquisition price. 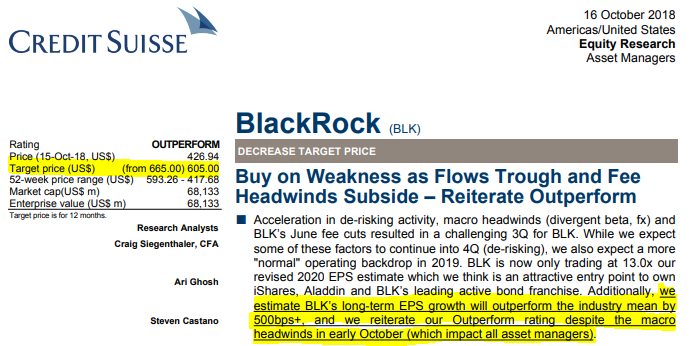 One reason analysts are gung-ho on BlackRock: It looks like a good deal now that overall weakness within the industry has driven down the stock’s price more than 30% from its high of $594.

As the following two images from CFRA indicate, its analyst has assigned a 12-month target price of $485 and current valuation of $449.

Finally, FAST Graphs indicates that no matter what time frame we plug in over the last two decades, BlackRock’s “blended P/E ratio” of 15 is considerably lower than its norm. 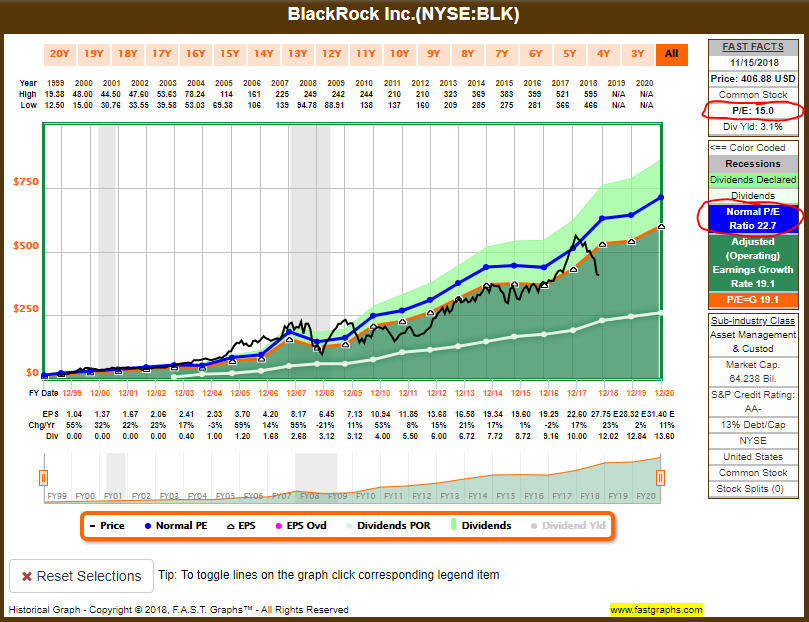 In the long-term illustration above, BLK currently is about 34% undervalued compared to its Normal P/E of 22.7; below, the post-Great Recession view shows about 19% undervaluation vs. the 18.6 norm. 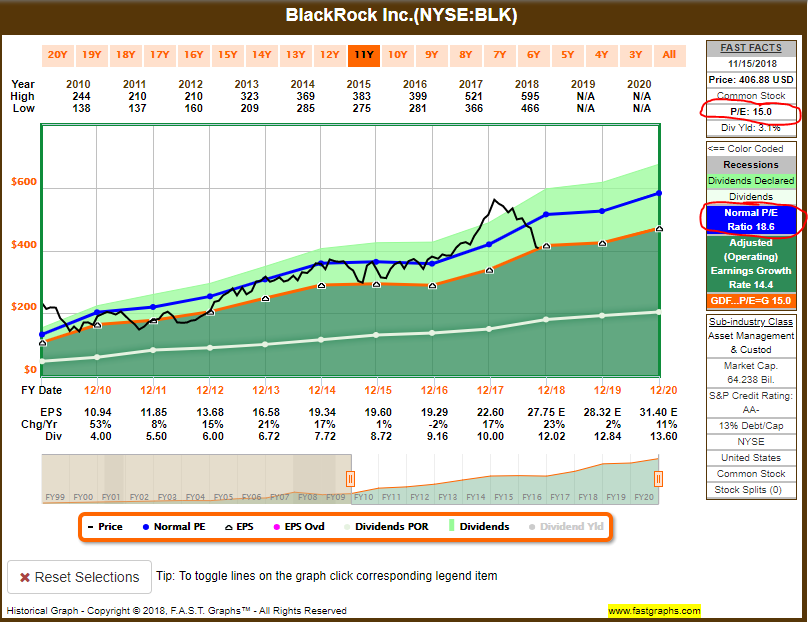 It is not easy finding an attractively valued, high-quality company with such a good yield, such an impressive record of dividend growth and such bullish (yet realistic) expectations going forward.

As I said way back in the third paragraph …

There will be two more buys for the Income Builder Portfolio in 2018, with our next selection being revealed in a Dec. 1 article.