Welcome back to the Valuation Zone.

This month, we’re going to visit an industry that I haven’t covered before: Master Limited Partnerships, also known as MLPs.

An MLP, as its name implies, is a partnership rather than a corporation. Individuals can buy units (rather than shares) in the partnership and thereby become limited partners (meaning they have no role in running the enterprise). MLPs trade with ticker symbols just like stocks.

MLPs often pay a high yield, because they pass through most of their profits to the partners.

Legally, to get the tax breaks associated with the structure, an MLP must be involved in the exploration, production, or transportation of natural resources or real estate.

Most MLPs operate in the energy industry, specifically in the pipeline, transportation, supply, and logistics areas.

In other words, they move oil and gas around.

MLPs have a general partner, which is a separate corporation that runs the MLP. General partners usually hold a 2% stake in the venture. 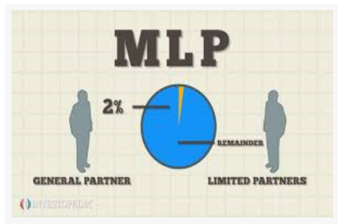 MLPs are known as pass-through entities, because they pass their profits and losses through to their partners. Deductions such as depreciation and depletion are also passed on to the partners, who can use them to reduce their taxable income. The MLP itself is not liable as an entity for taxes on its revenues.

Quarterly distributions from the MLP are sent out like stock dividends. But the majority of distributions are treated as return of capital rather than income, so the unitholder doesn’t pay income tax on most of the distribution amount when he or she receives it. Taxation is deferred until the units are actually sold.

One downside to MLPs is that they issue K-1 tax forms rather than 1099-DIVs. K-1 forms are more complicated, and they are notorious for arriving late. 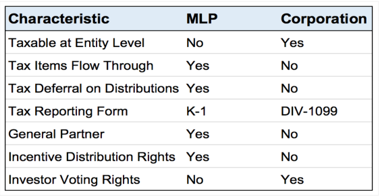 On the most recent Dividend Champions, Contenders, and Challengers document, I counted 26 MLPs. One of the best is Enterprise Products Partners (EPD), which is this month’s Valuation Zone selection.

EPD is currently paying a dividend of 6.4%. It has a dividend-increase streak of 21 years. Simply Safe Dividends rates its dividend safety as 80 out of 100 points, which means that its dividend appears to be safe and unlikely to be cut. Here’s what its distributions look like since its dividend-growth streak began. 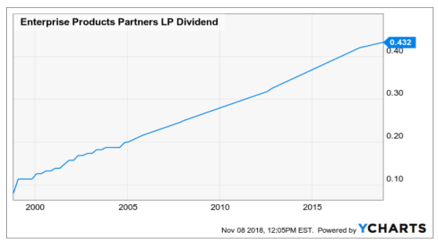 The line is very smooth (unlike the staircases we usually see), because EPD increases its dividend every quarter in recent years. The little up-steps don’t show up on the long-term graph. Sometimes they are less than a cent per share.

The discussion below will show why I think EPD is well valued. To see how I value a stock, please read Dividend Growth Investing Lesson 11: Valuation. In a nutshell, I assess valuation in 4 different ways, then average the results out.

In the the first step, we check the stock’s current price against FASTGraphs’ most basic estimate of its fair value.

For MLPs, I use Operating Cash Flow (OCF) instead of earnings for the denominator in P/E, so it becomes P/OCF. The reason is that MLPs have such high capital expenditures (for building their infrastructure) that offical earnings become distorted and jumpy from year to year. Operating Cash Flow is smoother and gives a better depiction.

The fair value reference line is shown in orange line on the following graph, while the black line is EPD’s actual price. 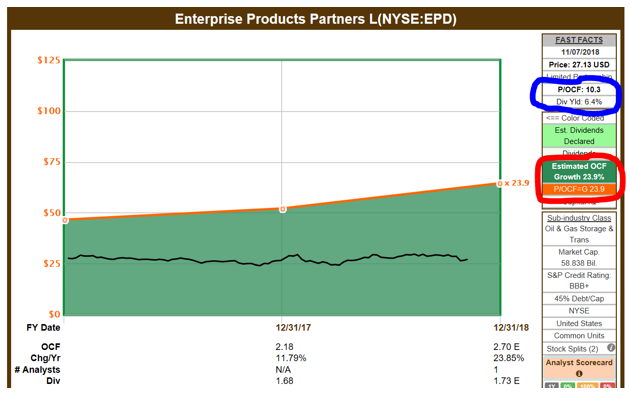 There is an unusual thing to notice: The orange line is not drawn at a ratio of 15; instead it is drawn at 23.9 (red circle). This is one of the nice features of FASTGraphs. When a stock has a very high projected growth rate, FASTGraphs substitutes a fair-value ratio that matches that growth rate instead of the usual 15.

Looking at EPD’s historical growth rate, however, convinces me that the forward growth rate of 23.9% is unusual for this company. Therefore I am going to manually plug in a P/OCF ratio of 15 for the fair-value reference line. That’s the conservative move, because it will make EPD seem less undervalued. 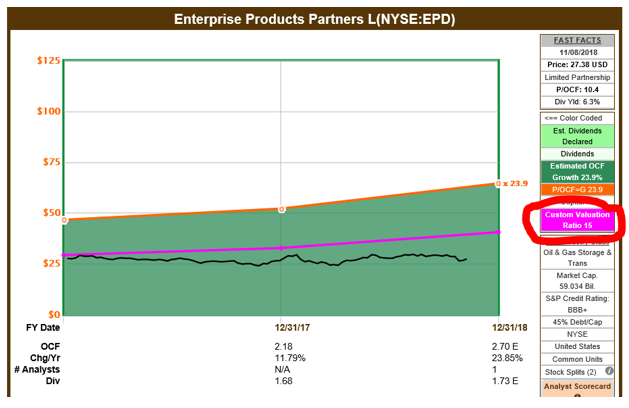 Using the custom reference line, here’s how to calculate the degree of undervaluation: Make a ratio out of the two P/Es.

That translates to EPD being 31% undervalued, even after the switch in the reference line. I call anything >20% undervalued “way undervalued.”

Here’s how to calculate EPD’s fair price: Divide its actual price by the valuation ratio that we just calculated:

I round prices off to the nearest dollar so as not to create a false sense of precision.

In this step, we “normalize” the comparison to make it specific to the stock’s own long-term valuation rather than to the market as a whole.

We do this by comparing EPD’s current valuation to its own historical valuation. I use EPD’s 5-year average P/OCF ratio (circled) for this step. 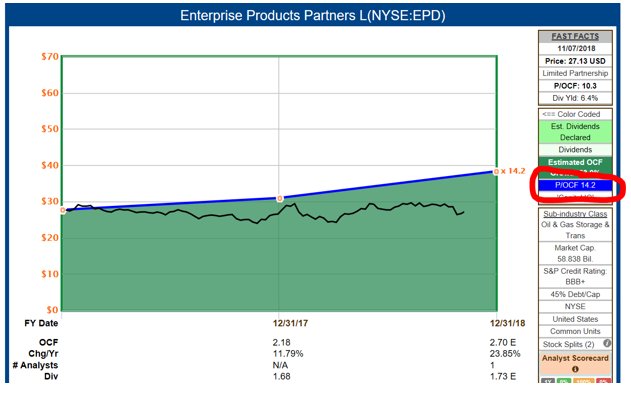 This 2nd step portrays EPD as a little less undervalued. That’s because EPD’s 5-year average P/OCF ratio of 14.2 is lower than the 15 used in the first step. That has the effect of moving the fair-value reference line down, closer to EPD’s actual price.

Morningstar takes a different approach to valuation. They ignore P/E, P/OCF or other similar ratios.

Instead, they use a discounted cash flow (DCF) model. Using conservative estimates for future projections, they discount all of the stock’s estimated future cash flows back to the present to arrive at a fair value estimate. (If you would like to learn more about how DCF works, check out this excellent explanation at moneychimp.)

On Morningstar’s 5-star system, 5 stars means that they think that EPD is significantly undervalued (by 24%). They calculate a fair price of $36.

The 4th and final valuation method is to compare the stock’s current yield to its historical yield. If a stock is yielding more than its historical average, that suggests that it is a better value than usual, because you are “paying less” for the stock’s dividends. 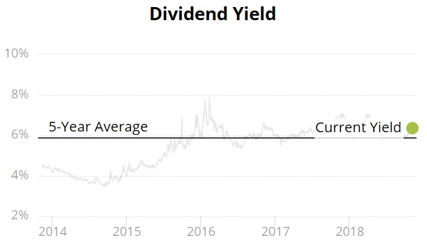 This method suggests the least degree of undervaluation for EPD. Its current yield is 6.4% compared to its 5-year average of 5.9%.

To calculate the degree of discount, we form a ratio of the yields:

The average of the 4 fair-price estimates is $35, compared to EPD’s actual price of about $27. That’s a 23% discount to fair value, suggesting that there is a margin of safety for someone buying the stock now.

With its 6.4% yield, good distribution safety score, and strong undervaluation, I think that EPD is selling for an attractive price right now. Of course, being an MLP with K-1 tax forms to deal with, some investors don’t want to own MLPs at all.

This is not a recommendation to buy EPD. So as always, perform your own due diligence. Check the company’s complete dividend record, business model, quality, financial situation, and prospects for the future, as well as its effect on your portfolio’s diversification. And as always, consider whether EPD fits (or does not fit) your long-term investing goals.