Although I fully admit that I know next to nothing about you, I do know this much: You are unlike the vast majority of investors out there.

How do I know that? Because you are reading this article about building a portfolio of individual stocks.

See, most investors do not bother dealing with individual stocks.

They think such a strategy is too “risky” … or they believe they don’t have the time to do the necessary research … or they don’t feel they have enough money to get started … or they don’t “trust the market” … or there could be a dozen other reasons.

The wealthiest 10% of households hold 84% of all stock owned by Americans, according to a study by New York University economist Edward Wolffe — meaning most U.S. citizens own little to no stock at all.

And many (perhaps even most) of those who do invest just want to keep things as simple as possible.

So they buy mutual funds within their employer’s 401(k) plans, they purchase exchange traded funds in their IRAs, and/or they get pensions from their employers. 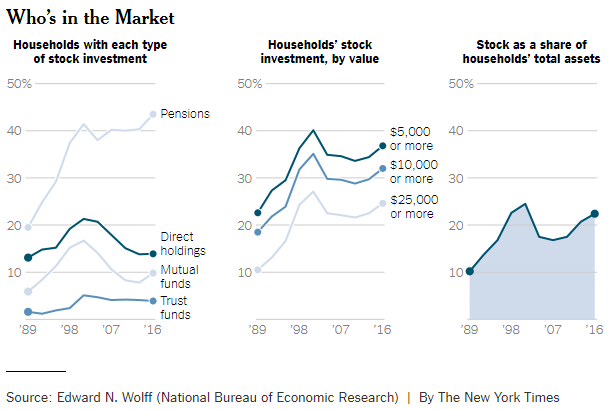 For these millions upon millions of investors, there are fund companies such as Vanguard and Fidelity and BlackRock.

I’m guessing you have heard of Vanguard and Fidelity, but maybe you are not as familiar with BlackRock.

Well, you are about to learn a lot more about BlackRock, because, unlike Vanguard and Fidelity, it is a publicly traded company … and it is going to be the next stock we add to DTA’s Income Builder Portfolio.

Come Friday, Nov. 16, I will execute a purchase order for shares of BlackRock (BLK), making it the 20th component of the real-money Dividend Growth Investing portfolio I am putting together on Daily Trade Alert’s behalf.

Here is Morningstar’s description of the IBP’s newest addition:

BlackRock is the largest asset manager in the world, with $6.444 trillion in AUM (assets under management) at the end of September 2018. Product mix is fairly diverse, with 54% of the firm’s managed assets in equity strategies, 29% in fixed income, 8% in multi-asset class, 7% in money market funds, and 2% in alternatives. Passive strategies account for two thirds of long-term AUM, with the company’s iShares ETF platform maintaining a leading market share both domestically and on a global basis. Product distribution is weighted more toward institutional clients, which by our calculations account for 80% of total AUM. BlackRock is geographically diverse as well, with clients in more than 100 countries and more than one third of its AUM coming from investors domiciled outside the United States and Canada.

Any discussion of BlackRock is probably best started with a look at iShares, the selection of ETFs the company offers to both individual and institutional investors.

According to ETFdb.com, 10 of the 17 largest exchange traded funds carry the iShares name: 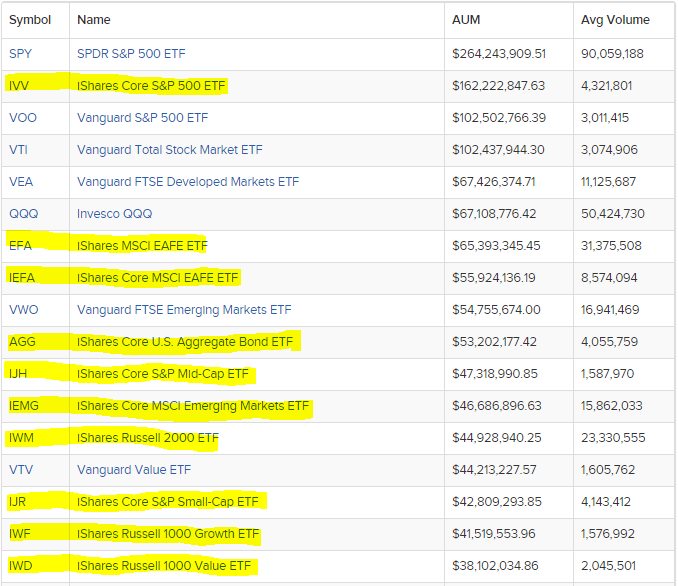 BlackRock primarily caters to institutional investors, such as retirement plans offered by employers.

That strengthens BlackRock’s economic moat because institutions do not hop around from one investment manager to another.

For that matter, individual investors also tend to stay put once they have decided on a manager — one of the big reasons that companies such as BlackRock, Vanguard and Fidelity work so hard to land clients in the first place.

Due to its sheer size, its proven strength and its product innovation, BLK has received “Wide moat” status from Morningstar, which also says the company’s stewardship under Larry Fink — the CEO since BlackRock went public in 1999 — has been “Exemplary.”

BlackRock’s “Aladdin” asset management tool has become a valuable instrument for the company’s institutional clients and is used by about 25,000 investment professionals. 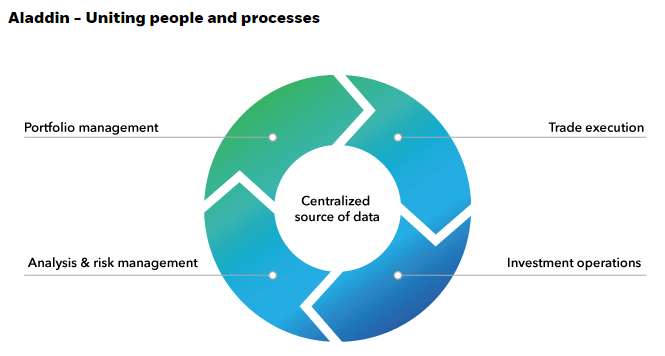 As the following illustration from FAST Graphs shows, BlackRock has experienced steady earnings growth over the years.

There have been only three year-over-year EPS dips (highlighted in yellow) during the last two decades, and growth is expected to continue for years to come (red circled area).

The following slide from BlackRock’s 2018 third-quarter earnings report of Oct. 16 indicates how profitable it has been. 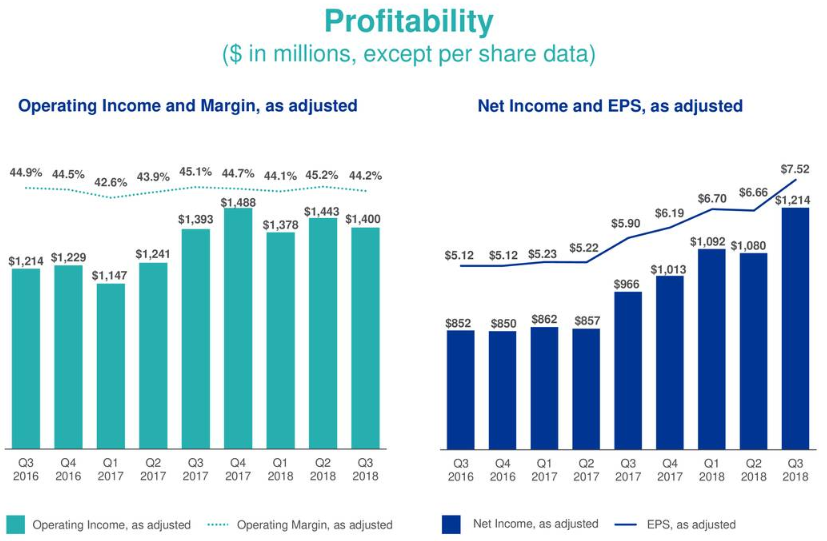 The company recently completed its acquisition of the asset management business of Citibanamex, a Mexican subsidiary of Citigroup (C), further expanding a footprint that includes 100+ countries.

BlackRock’s balance sheet is outstanding, with only 13% debt to capital, and the company has earned Standard & Poor’s AA- credit rating.

In addition, Value Line gives BLK its top “Financial Strength” score (A++) and a solid “Safety” rating of 2.

While total return matters, the primary goal of the Income Builder Portfolio is to “build a reliable, growing income stream by making regular investments in high-quality, dividend-paying companies.”

BlackRock certainly qualifies, having paid dividends without interruption or reduction since 2003.

Showing extra confidence in its business and determined to give more back to shareholders, BlackRock has increased its quarterly dividend twice in 2018 — going from $2.50 to $2.88 (15.2%) with its normal January announcement, and then to $3.13 (8.7%) just six months later.

One thing I have preached since the IBP debuted in January is that there is no such thing as a “safe” stock … and BlackRock obviously is not immune to market risks.

Specifically, because most of the company’s annual revenue comes from fees levied on its assets under management, a bear market in which panicked investors “Sell! Sell! Sell!” almost surely would affect BLK’s bottom line (and, therefore, its share price).

Indeed, the fall in BlackRock’s price during the Great Recession pretty much mirrored the overall market’s 55% decline.

Deep losses during a recession are fairly common for financial companies, so concerns that the current 10-year bull could run out of steam might make investors steer clear of a stock like BlackRock now.

Significantly, however, BLK did bounce back much faster and stronger from the Great Recession than the overall market did.

As the above graphic shows, it took less than 4 1/2 months for investors in BlackRock stock to get back in the black, as BLK more than doubled the gains of the S&P 500 Index over the same span.

And, as noted earlier, BlackRock did not cut its dividend during the recession, differentiating itself from many other financial companies such as major banks. 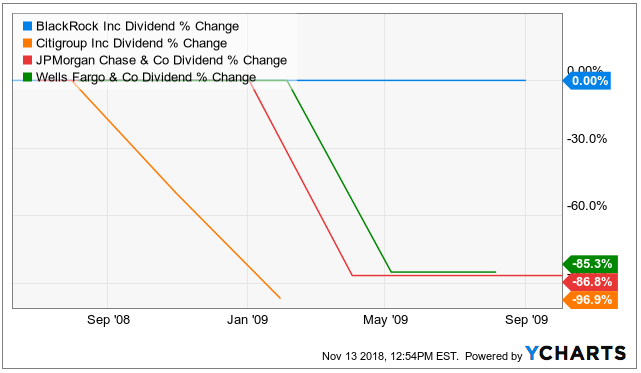 Knowing how financials tend to perform during recessions, I thought long and hard before selecting a company from that sector for the Income Builder Portfolio.

Nevertheless, I want the IBP to be diversified, and I also want to demonstrate the kind of options an investor might have if he or she wants to own a strong financial firm while avoiding bank stocks.

BlackRock is a very well-run company and an industry leader, and I feel confident that it will be a solid investment for this long-term endeavor.

On Saturday, Nov. 17, we will publish an article recapping our BLK purchase for the IBP, complete with an examination of the company’s valuation.