Even though American Electric Power (AEP) has paid quarterly dividends without interruption since 1910, it is not necessarily the kind of company Dividend Growth Investing practitioners always embrace.

Why? Because, as a reader pointed out to me in an email, AEP cut its dividend 15 years ago and froze it during the Great Recession.

Despite that fact (and more on that a little later), I selected AEP as the next component of DTA’s Income Builder Portfolio.

On Tuesday, Nov. 6, I executed a purchase order on Daily Trade Alert’s behalf to buy 14 shares of the stock at $73.73 apiece. 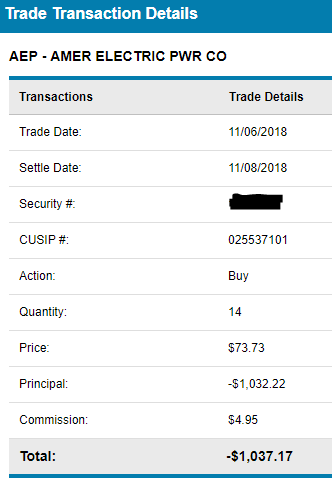 DTA allocates $2,000 monthly for two buys, leaving about $963 for our second November purchase in a couple of weeks — although I can exceed that slightly if necessary because the portfolio includes some cash.

In my previous article, I detailed several reasons for choosing American Electric, and the generous dividend the company pays was way up there.

As the following image indicates, AEP just raised its quarterly dividend 8.1% to 67 cents. 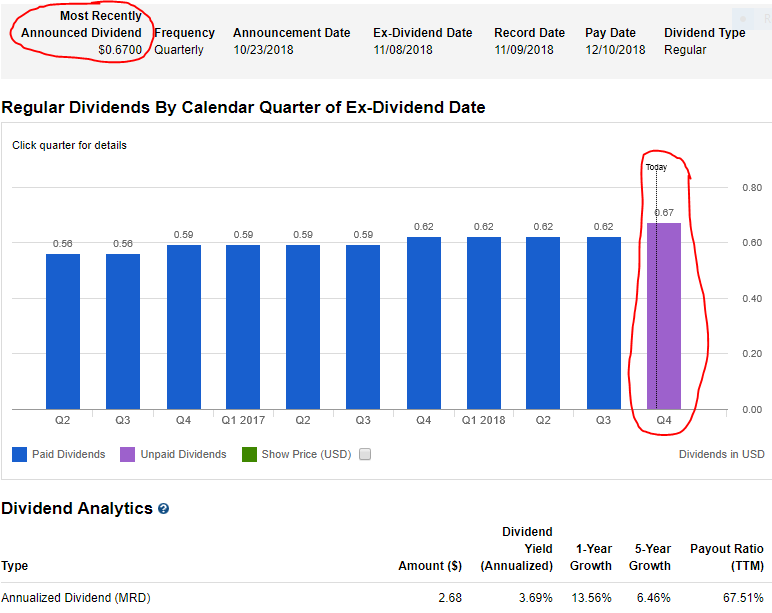 Because our purchase occurred before the Nov. 8 ex-dividend date, the IBP will receive $9.38 on the next pay date, Dec. 10.

In accordance with the portfolio’s Business Plan, all dividends are reinvested.

If American Electric is still trading at about our purchase price, the payment received will buy about .127 of a share.

Then, in March, the 14.127 shares of AEP will generate $9.47 in dividends, which in turn will be “dripped” to add still more to the IBP’s stake in the company.

And that’s the way an income stream gets built … hence, the name of this portfolio!

But Is The Dividend “Safe”?

Now, back to the email I received from the reader, whose name is “Vish.” Here’s the meat of it:

Two questions came to my mind …

When Vish said “most of the folks,” he was referring to the many DGI proponents who say a freeze or cut is a reason to reject a stock.

I don’t necessarily agree with that, and here was my answer:

I also mentioned to Vish that I didn’t know the reason for the dividend cut back in ’03. Since our exchange, though, I did a little research and I found a Columbus (Ohio) Business First article from Jan. 24, 2003: HERE.

The gist: AEP had sustained a major financial loss the previous year and needed to reduce costs to keep its credit rating, so it sold off non-core assets, laid off workers and cut its dividend from 60 cents per quarter to 35 cents.

I’m sure that wasn’t pleasant back then for AEP shareholders, many of whom no doubt ranked the dividend high on the list of reasons they had bought the stock in the first place.

Nevertheless, it’s not as if AEP was alone in that regard. For example, another of my favorite utilities, WEC Energy (WEC), also cut its dividend in the early “aughts.”

As the New York Times said in an article on March 23, 2003, it was fairly common back then.

Anyway, since AEP’s cut, here is how the company has re-grown its payout: 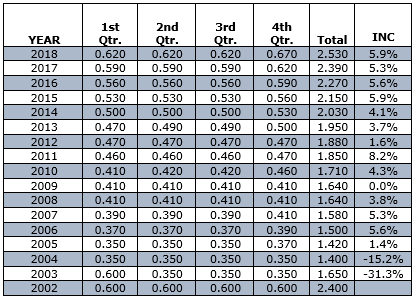 Assuming there is no cut next year, 2019 will mark the 10th consecutive year the annual dividend will have increased, and the 15th straight year without reduction.

And again, Akins, the company’s CEO since 2010, repeatedly has gone out of his way to stress the importance of the dividend.

So although I’m not 100% certain that AEP will never, ever cut its dividend again, I am confident enough about the safety of its payout.

Indeed, AEP becomes the 14 company in the IBP with a dividend graded “Very Safe” by Simply Safe Dividends: 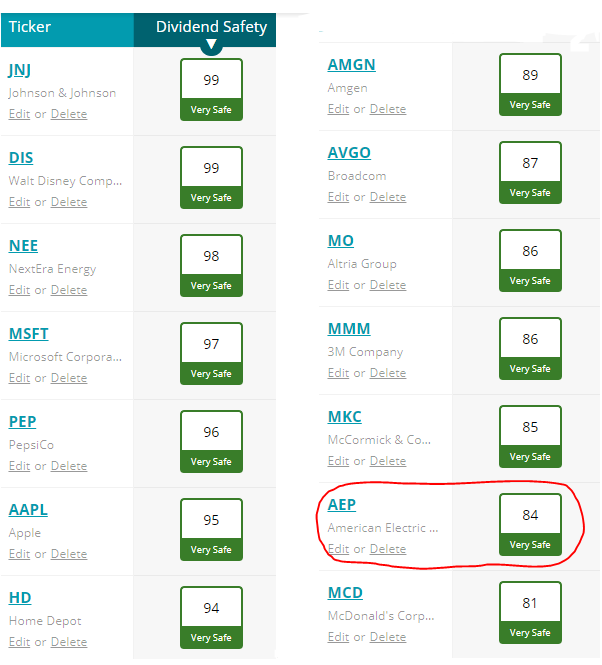 In general, analysts are bullish about American Electric. This compilation by Thomson Reuters (as published on Fidelity.com) illustrates that nicely: 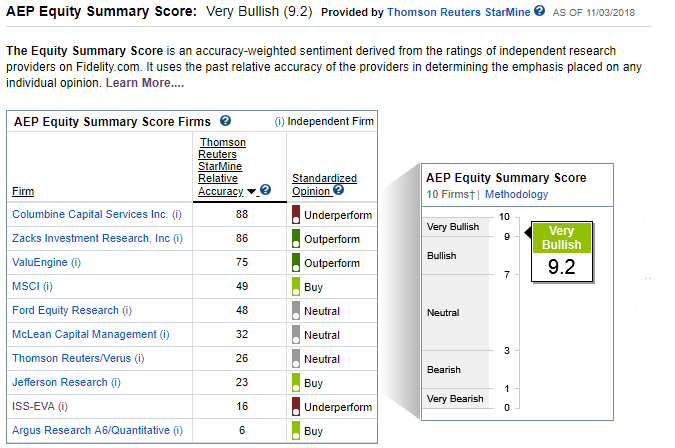 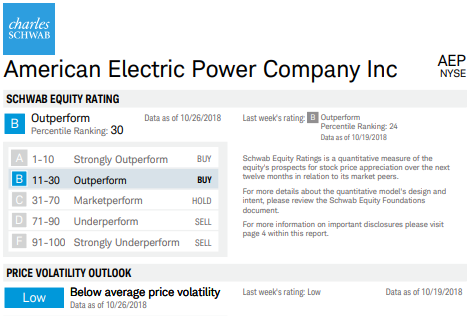 Value Engine forecasts price appreciation of 5% to 12% for AEP over the next year.

CFRA is another pretty bullish analytical site, with a target price of $78.

The first, taking a look back at AEP’s normal valuation since before the recession, suggests that the company is comparably overvalued. 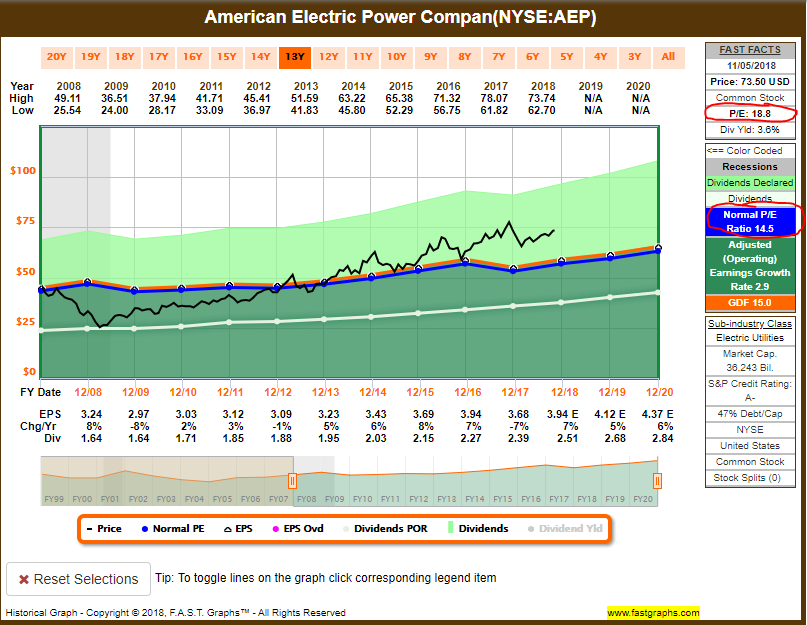 Using a shorter time frame, however, AEP appears to be only slightly overvalued. 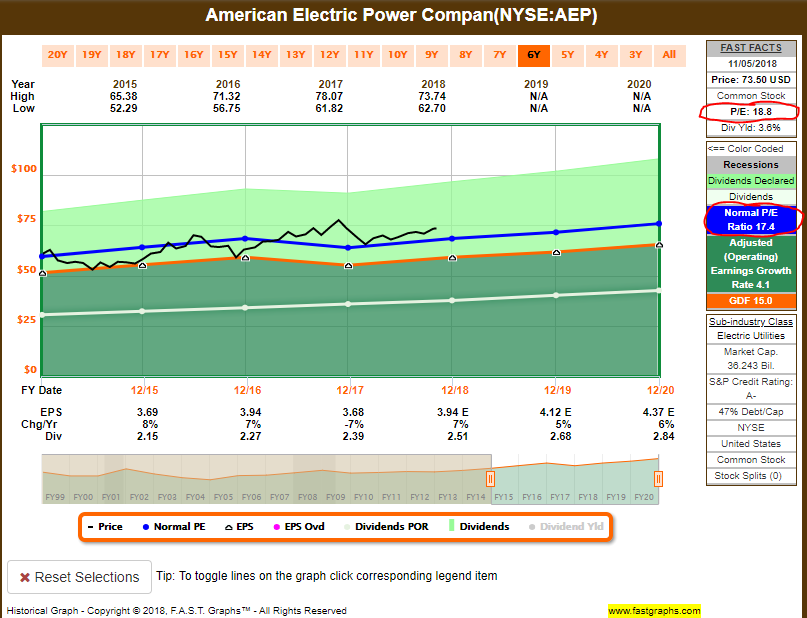 Although American Electric Power is not what one would call a “screaming buy,” I consider it a solid utility available at a fair price.

Despite its dividend cut 15 years ago, I feel good about the company’s long trend of returning income to shareholders. The most recent 8.1% raise certainly is reassuring.

I like adding a third high-quality utility to the Income Builder Portfolio, with AEP joining NextEra Energy (NEE) and Dominion Energy (D), and I look forward to many years of inflation-beating dividend growth from each of them.

I wouldn’t be surprised if they all compete quite nicely in total return, too, even if that’s not really why one purchases a utility.

As always, I strongly urge investors conduct their own due diligence before buying any stock.