The next company we will be adding to DTA’s Income Builder Portfolio is so steady and so predictable that it borders on boring.

If you live in one of the areas served by American Electric Power (AEP) and flip a switch, you get light. That’s what they do. Whoop-de-freakin-do, right?

Well, in building a Dividend Growth Investing portfolio from scratch — which is exactly what the IBP is all about — boring is A-OK. Or to quote a Nobel Prize-winning economist …

Since our real-money project’s inception, I’ve tried to choose some stocks with a little sizzle, such as: Constellation Brands (STZ), which aims to boost its booze business with a sizable investment in the marijuana industry; tech companies Apple (AAPL), Microsoft (MSFT) and Broadcom (AVGO); entertainment conglomerate Disney (DIS); and biotechnology firm Amgen (AMGN), our very first buy way back in January.

Still, I always come back to the goal of the portfolio, as stated in the Business Plan:

That means balancing the occasional sizzle with a heaping helping of steady … or even boring.

Nothing says “steady” to DGI practitioners quite like regulated electric utilities, which is one major reason the IBP already owns NextEra Energy (NEE) and Dominion Energy (D).

Once I execute a purchase order on Daily Trade Alert’s behalf for about $1,000 in AEP stock on Tuesday, Nov. 6, the only sector with more representation in the Income Builder Portfolio will be consumer staples (four companies).

Barring an environmental catastrophe or significant corporate event, utilities rarely experience the kinds of highs and lows that so many other industries do.

So while that means the “ceiling” usually is lower, it also means the “floor” tends to be less scary.

The following FAST Graphs image illustrates the steady progression of AEP’s earnings per share (orange line on the graph and red circled area beneath it) and dividends (white line and yellow highlight).

The blue circles indicate the few years that had small EPS declines.

AEP has been making sure the lights go on for more than a century. It’s been 70 years since the company’s name was changed from American Gas and Electric to American Electric Power.

It has grown to serve more than 5 million customers in 11 states, and its 40,000-mile electric transmission network is the nation’s largest.

The company’s most recent earnings report was very good, as the following slide from the Oct. 25 presentation shows. 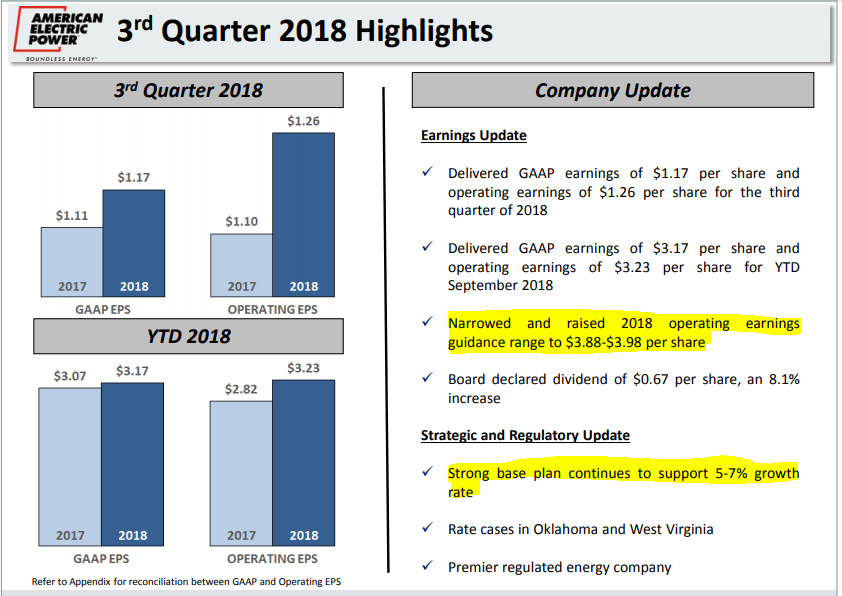 Importantly, because investing should always be a forward-looking endeavor, note the highlighted areas: Full-year EPS guidance was raised to $3.88-$3.98 per share (it had been $3.75-$3.95); and annual earnings are expected to keep growing 5%-7%, quite respectable for a utility.

This “Financial Sonar” from Jefferson Research indicates that AEP’s fundamentals are strong across the board. 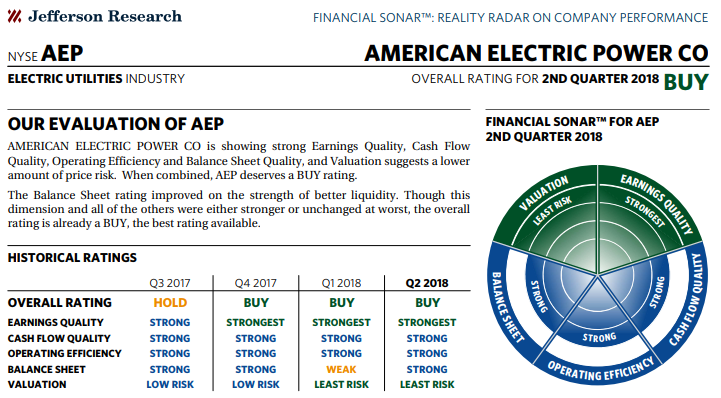 Standard & Poor’s gives AEP a fine A- credit rating, and Value Line has deemed the company worthy of high scores for Safety (1) and Financial Strength (A+).

One major reason most investors buy a utility is the promise of future dividends. Obviously, DGI proponents are especially interested in this. 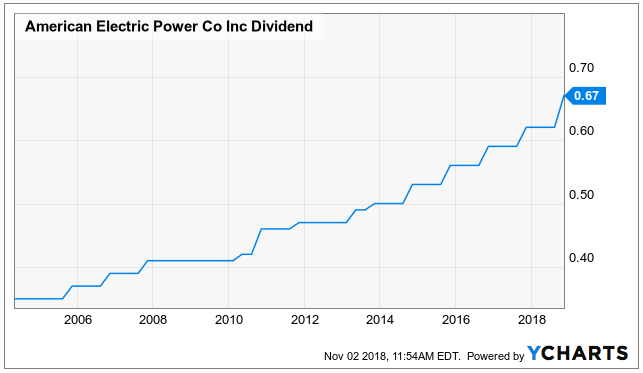 Although the company did freeze the dividend for one year during the recession, management recently has emphasized the commitment to keep taking it higher.

On Oct. 23, AEP announced its largest raise in recent years — 8.1%, to 67 cents per quarter. CEO Nicholas Akins made sure he highlighted the increase during the earnings call a couple of days later:

Because of our belief that we are and continue to be on a firm 5% to 7% earnings trajectory buoyed by a strong base plan into the future, our board was very comfortable increasing the dividend by 8.1%, well within our 60% to 70% targeted payout ratio.

The relatively low payout ratio and the solid earnings expectations combine to give shareholders reason to believe steady (there’s that word again) dividend hikes will continue for years, most likely increasing in lockstep with EPS growth.

I actually considered simply adding to the Income Builder Portfolio’s D or NEE position. But Dominion is dealing with issues connected to its proposed acquisition of troubled Scana (SCG), and I wanted a little higher yield this time than that of NextEra.

Besides, I like the idea of geographic diversification when it comes to utilties.

Unlike NEE and D, which operate mostly in the southeastern United States, AEP’s main presence is in the southwestern U.S. and the heartland. 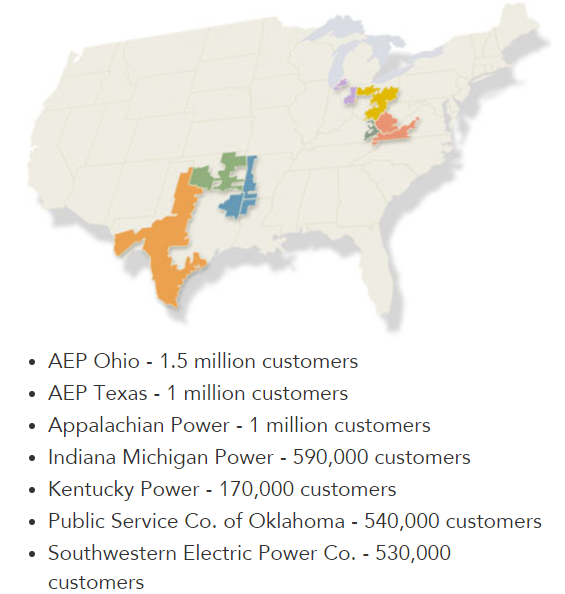 Even though utilities are less prone to ride the stock market’s roller coaster of major climbs and falls, they do have their own risks.

For example, they must deal with regulators from each state in which they operate.

In general, AEP has been able to set rates high enough to run its business profitably, with Return on Equity of about 10% from each state. Still, AEP currently is haggling with West Virginia and Oklahoma regulators. 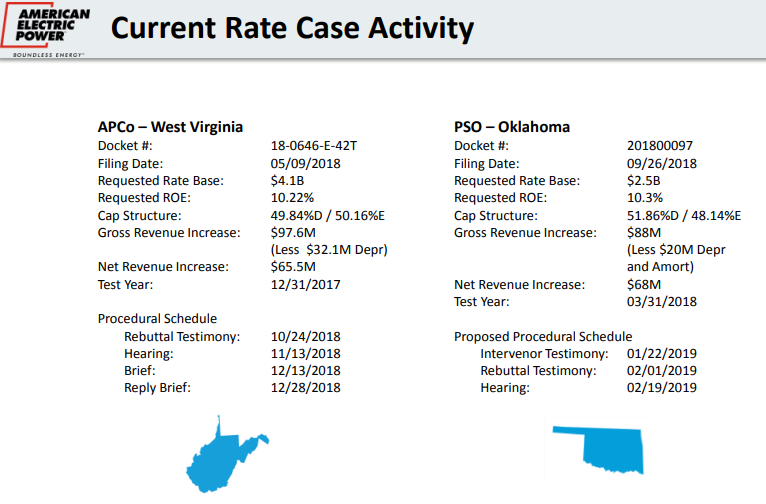 Additionally, the ability to raise rates in the future might depend partly on each region’s economic health. After a long stretch of growth, there has been some softness in the financial strength of many areas AEP serves. 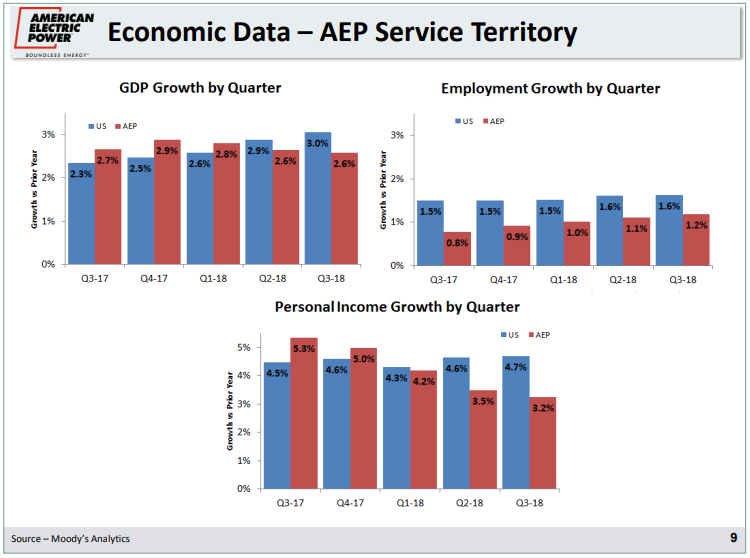 Lastly, nearly half of AEP’s power generation still comes from coal, not surprising with such large operations in West Virginia, Ohio and Kentucky.

The nationwide trend is toward more sustainable energy, and AEP is moving in that direction, just more slowly than many of its peers.

Of course, that could be seen as a plus, too.

While some utilities are investing billions of dollars at a time in solar, wind, natural gas, nuclear and other projects that might not work out as well as they had hoped, boring ol’ AEP takes the slow-and-steady approach there, too. 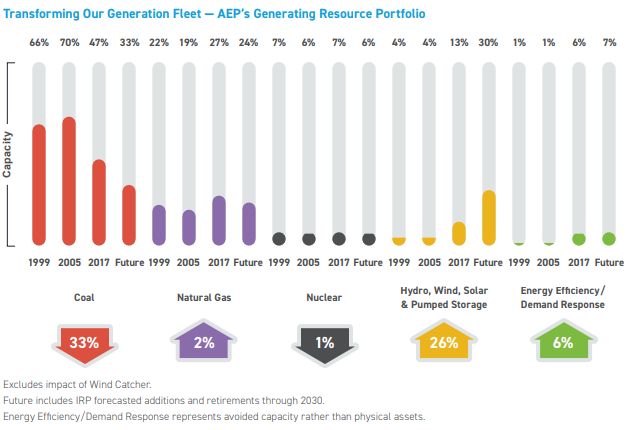 If you’re into the get-rich-quick scene, you probably don’t invest in utilities … and you’re probably not here reading about the Income Builder Portfolio.

American Electric Power might seem a boring investment to some, but it checks most of the big DGI boxes: steady earnings, reliable income growth, inflation-beating dividend yield.

It will be a welcome addition to the IBP as the portfolio’s 19th position.

My article detailing the execution of our AEP purchase, along with some pertinent valuation information, will be published Wednesday, Nov. 7.