For 10 months, I’ve been putting together DTA’s Income Builder Portfolio, stock by stock, investing about $1,000 approximately every two weeks.

Despite the presence of a few laggards, I’m proud of the results so far.

The overall market has veered into negative territory for the year, but the IBP is still up more than 2%, and 10 of the portfolio’s 18 positions are showing gains. 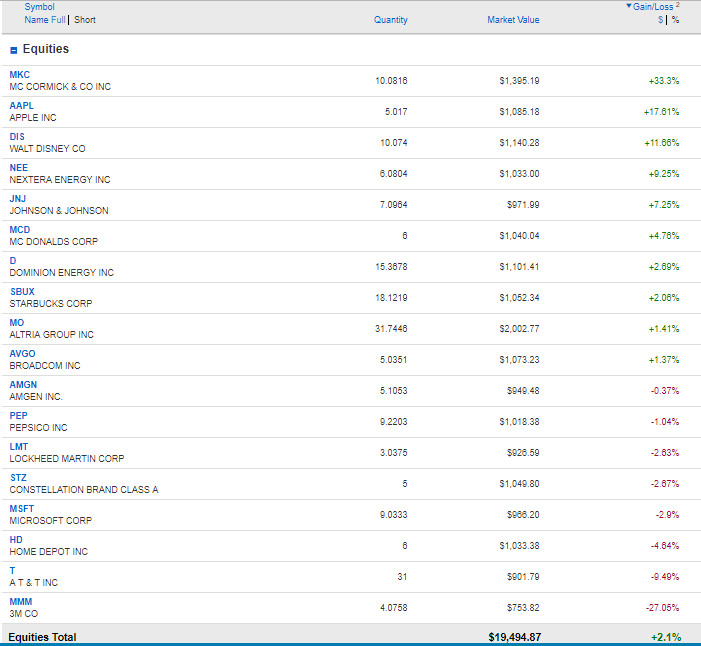 Meanwhile, our main goal (as stated in the IBP Business Plan) — “Build a reliable, growing income stream by making regular investments in high-quality, dividend-paying companies” — is being met nicely with double-digit income growth and a yield near 3%.

I take my task as the IBP’s architect very seriously, and I want the portfolio to have the kind of companies any Dividend Growth Investing practitioner would be happy to own.

Besides, real money — provided by Daily Trade Alert — goes into every stock I choose.

So selecting companies for the Income Builder Portfolio is never “easy.”

Sometimes, however, the process is downright difficult … and this probably was the most challenging choice for me so far because of the market’s volatility. 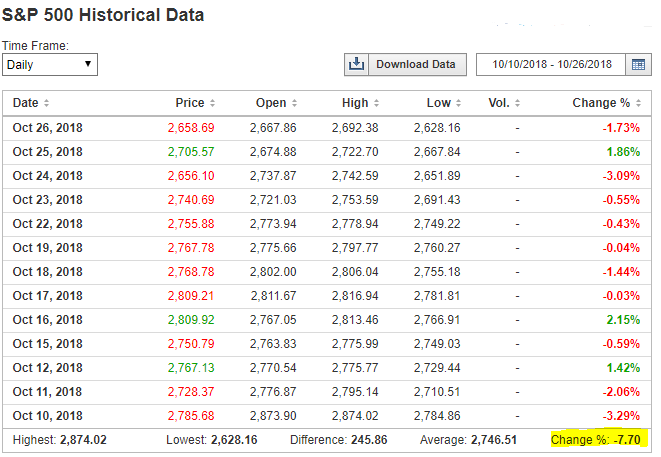 Friday, Oct. 26, was especially wild, with the market going down 3% early, recovering around lunchtime to near even for the session, and then plummeting late to finish down 1.7%. 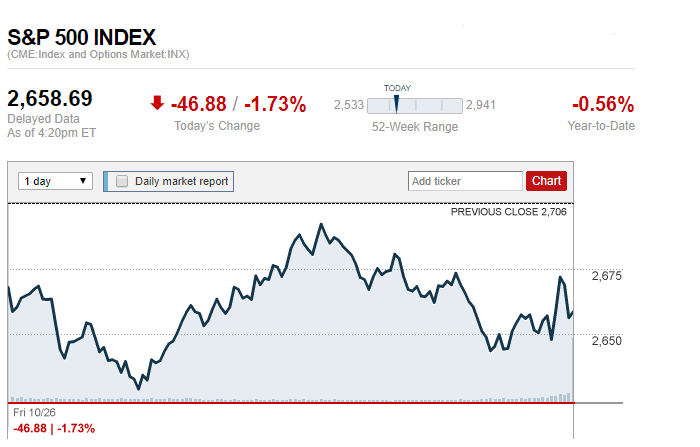 Amidst that backdrop, I considered several companies for the IBP’s next purchase, which will be made Tuesday, Oct. 30.

I’m interested in the likes of Exxon Mobil (XOM), Chevron (CVX), Apple (AAPL), KLA-Tencor (KLAC), Medtronic (MDT) and AbbVie (ABBV), but I passed this time because each will be announcing earnings soon and I generally do not like to buy right before such reports.

Although I strongly considered adding to the portfolio’s stakes in 3M (MMM) or Lockheed Martin (LMT), I passed on them and fellow industrials such as Caterpillar (CAT), Northrop Grumman (NOC) and Raytheon (RTN).

The sector is just too unsettled right now, what with Donald Trump’s trade war, the tenuous status of potential arms deals with Saudi Arabia after the brutal execution of a Washington Post journalist, and other macroeconomic and political factors. 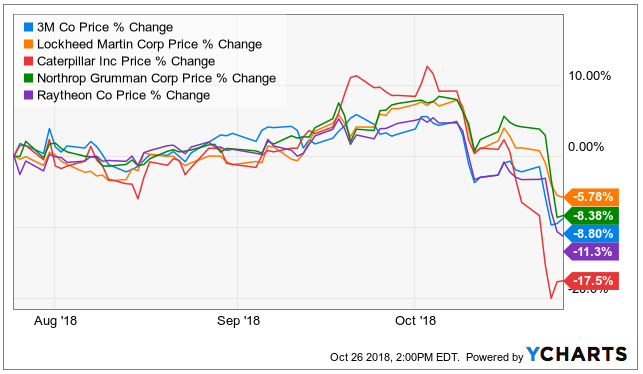 I gave serious thought to Texas Instruments (TXN), but the highly cyclical semiconductor industry seems to be searching aimlessly for a bottom. (That did not deter my DTA colleague, Dave Van Knapp, from just making TXN his Dividend Growth Stock of the Month.)

My final decision this time came down to two blue chip companies already held in the IBP, PepsiCo (PEP) and Microsoft (MSFT), each of which recently had an outstanding earnings report.

I ended up selecting Pepsi due to its 3.3% dividend yield (roughly double Microsoft’s), its seemingly more attractive valuation, and its residence in a more defensive sector (consumer staples vs. technology).

Really, not much has changed about Pepsi since the IBP invested in the beverage and snack giant last February. It’s still the same wonderful company with some of the most popular brands in the industry.

The article stating my original buying thesis is HERE, and my piece about the actual purchase is HERE.

I don’t want to get repetitive so I won’t simply regurgitate the stuff I wrote 8 months ago. Suffice it to say, however, that Pepsi looks even better now than it did then. 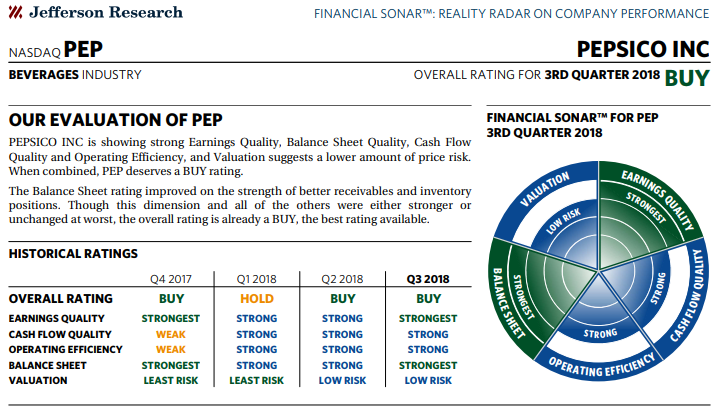 The above “Financial Sonar” from Jefferson Research illustrates that Pepsi’s earnings quality and balance sheet have only gotten stronger.

Here’s what Morningstar analyst Sonia Vora had to say after Pepsi’s earnings report was released Oct. 2:

Pepsi posted strong top-line results in the third quarter, with organic sales up nearly 5% (with a 3% contribution from price/mix) and volume expansion in each of the firm’s six segments. From our vantage point, this performance indicates the brand equity of Pepsi’s food and beverage offerings (a key determinant of our wide moat rating) remains healthy, and that the firm’s efforts to drive innovation within its portfolio and better promote new offerings have gained traction with consumers. Most importantly, we were pleased to see organic beverage volumes grow 2.5% (marking the third quarter of sequential improvement), including a return to volume growth in the North America Beverages segment (one third of sales).

Here is a look at the basics of Pepsi’s report, highlighting year-over-year earnings per share growth for the third quarter:

The following FAST Graphs snippet shows how steadily Pepsi’s earnings have grown (blue circled area), are expected to increase this year (red), and are projected to grow through 2020 (black).

Pepsi has given shareholders yearly dividend growth for nearly a half-century.

Its most recent raise was a welcome 15.2% boost, making for 5-year annual dividend growth of more than 10%. 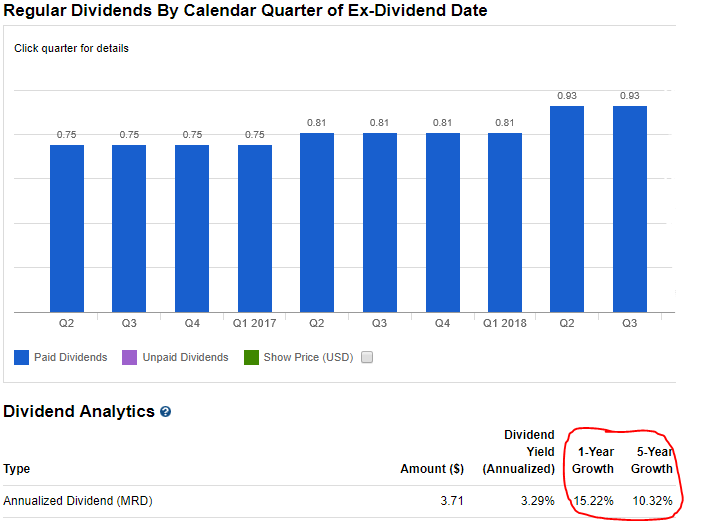 PEP will make two more payments at the .925/quarter rate and then undoubtedly will hike the dividend again.

The company’s current 3.3% yield is near its high for the decade since the Great Recession ended; it is well above the company’s 5-year average, as the following Simply Safe Dividends graphic shows. 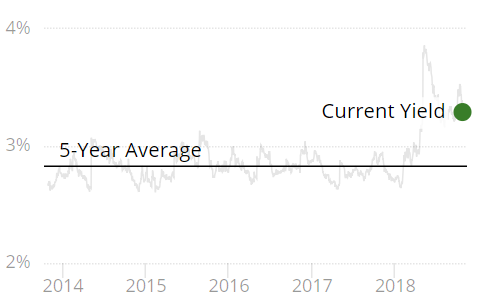 SSD also gives PEP a Dividend Safety score of 96 on a scale to 100.

Change At The Top

Pepsi’s price was within a stone’s throw of its all-time high of $122 before its August 6 announcement that long-time CEO Indra Nooyi will retire and be replaced by 22-year Pepsi veteran Ramon Laguarta. 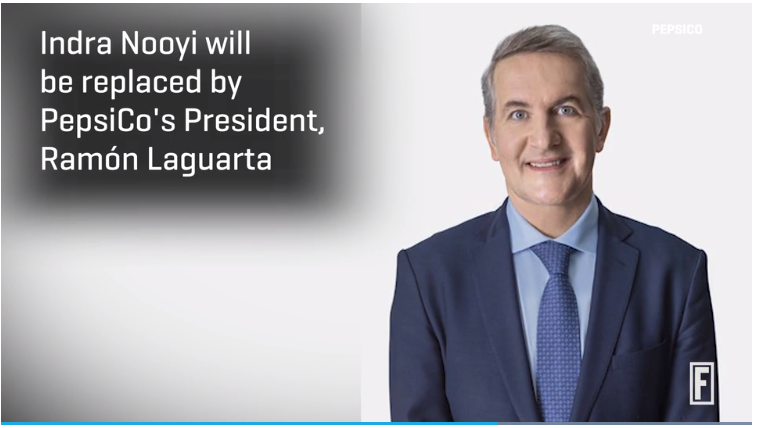 Fortune.com has an interesting take on the change, which happens early next year.

Departures of successful chief executives such as Nooyi tend to cause Mr. Market some angst, and this was no exception.

News of the impending CEO switch, followed by the market’s overall pullback, has kept PEP trading in a fairly narrow window between $105 and $115 the last couple of months.

Morningstar’s analysts are sticking with their “Exemplary” stewardship rating for PEP:

We don’t anticipate a material shift in Pepsi’s strategy with Laguarta in the top spot, given his 22-year tenure at Pepsi and key role in setting its strategic priorities during his time as president.

If the change at the top doesn’t faze analysts who have followed Pepsi for years, I’m not going to let it bother me, either.

Great companies thrive even when faced with significant challenges.

While the market was losing 7.7% since Oct. 10, PEP actually was gaining 2.2%. During the Great Recession, Pepsi grew earnings each year. Despite a slowdown in soda consumption, Pepsi keeps making money thanks largely to a snack division that is the envy of its industry.

And of course, not even wars, recessions and political shenanigans have stopped PEP from raising its dividend — year after year, decade after decade.

For these reasons and more, I am excited to make Pepsi the second Income Builder Portfolio position to “double-up.” Cigarette-maker Altria (MO) was the first, with buys in February and August.

My article about the execution of our PEP purchase, along with some pertinent valuation information, will be published Wednesday, Oct. 31.