Even if you’re building a portfolio centered on growing your income stream, you still can compete with Mr. Market … and sometimes you actually can beat him.

The IBP had a sensational third quarter of 2018 — not only growing dividends at an outstanding clip (more on that later), but also rebounding from a slow first half of the year to surpass the S&P 500 Index in total return.

Twice every month, I select companies to buy on behalf of Daily Trade Alert’s editors, who make $2,000 available monthly.

As the following table shows, 14 of the IBP’s 17 positions experienced gains through Sept. 28, the last trading day of the quarter — leading the portfolio to move nearly 7% higher. 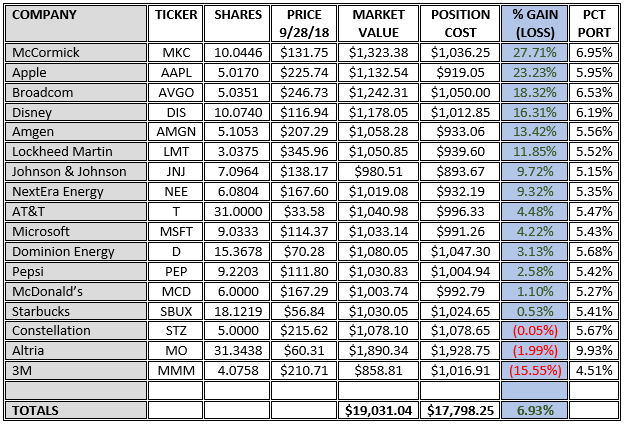 The portfolio’s six double-digit-percentage advances were by companies representing a wide swath of sectors: 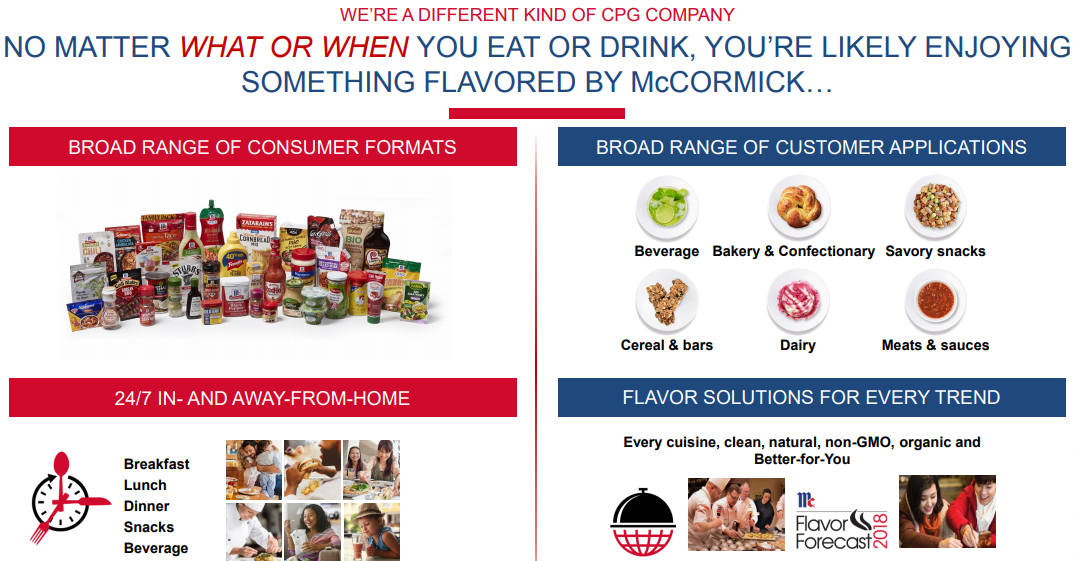 The last column of the table indicates the percentage of the portfolio each company represents.

Altria is the IBP’s largest position, as we bought shares of the cigarette maker in both February and August. The second batch, acquired at a lower price, has performed much better than the first. 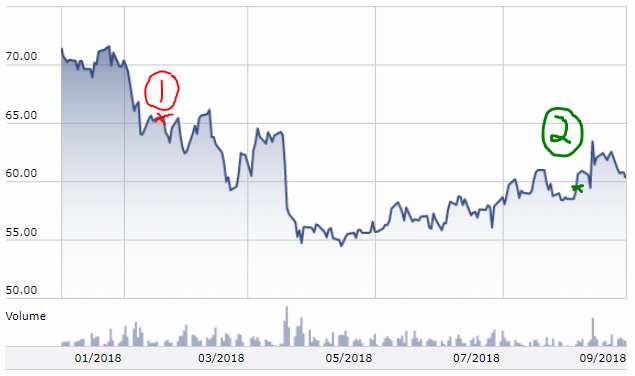 3M is the smallest position and by far the biggest “loser” to date, having been beaten down more than 15% due to the trade war and other macroeconomic issues.

Each of the other 15 positions makes up between 5% and 7% of the portfolio’s value.

At the end of the first quarter, NEE was the only company of the six owned at the time to show a gain.

After Q2, more than half of the portfolio’s dozen holdings were in the red, and the IBP showed an overall loss of 3.6%.

So obviously, it’s been quite a third-quarter rally for the Income Builder Portfolio.

Here, listed in order of purchase date, is how the the portfolio overall and its individual positions fared through the first nine months this year relative to the SPDR S&P 500 ETF (SPY): 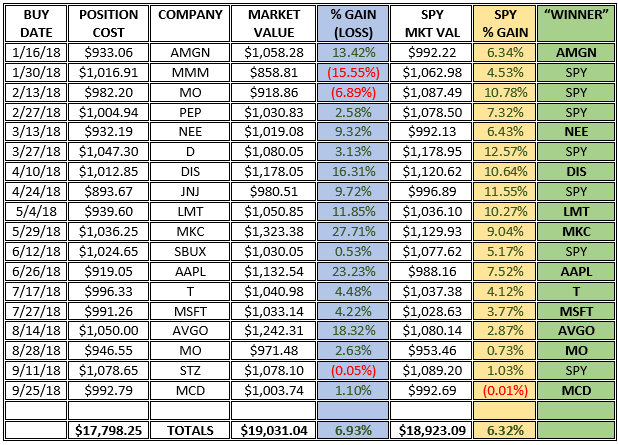 For purposes of comparison, I used the Dividend Channel calculator to obtain the performance of SPY from the date of each IBP purchase through the end of Q3.

Although it isn’t an exact science because each IBP company was bought during the trading day while the SPY’s closing price was used in each scenario, I think it represents a valid comparison.

Eleven of our 18 stock buys ended up doing better than a same-session purchase of SPY would have.

McCormick and Apple tripled the index in the same time spans, but the biggest out-performer was chip-maker Broadcom — which soared more than 18% in six short weeks after being added on August 14 (compared to about 3% for SPY). 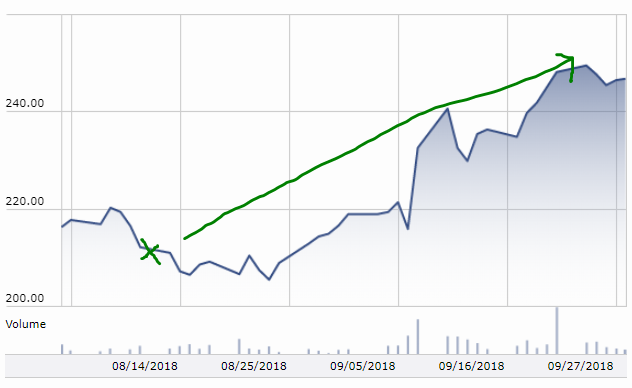 Even AT&T — a 6% yielder that is part of many “boring” Dividend Growth Investing portfolios — outgained SPY after we bought it.

When I selected T in July, I said my primary motivation was, simply: “Shares of AT&T are dirt cheap.” Valuation isn’t always the No. 1 concern as I put together the IBP, but this example demonstrates why it does matter.

Although I began this Q3 review with a look at total return — because I wanted to emphasize that DGI and total return are not mutually exclusive concepts — I have not forgotten what we’re trying to accomplish with the Income Builder Portfolio.

The goal, as stated in the IBP Business Plan:

The secondary goal is to build a portfolio that will experience solid total return, something we believe will occur organically because of the excellent companies owned.

After the first quarter, when the IBP owned only six companies, the projected yearly income stream was $201. After Q2, when a dozen stocks were in the fold, expected annual income was up to $330.

Now, with 17 positions (including a double-stake in Altria), that figure has increased to $549.

The following, from Simply Safe Dividends, is an income-centric snapshot of the portfolio after three quarters. (I have X’d out the balance because it extends several days beyond the end of the quarter.)

I am comfortable with every aspect of that, especially the overall dividend growth and safety numbers.

The 17 companies in the IBP have combined to grow dividends at a 10.5% annual clip the last five years, and raises have been generous so far in 2018.

As for safety, although I do not look at any single metric as the end-all and be-all, the SSD rating is one of many things I consider when choosing investments for the IBP.

Here, in order of annual projected income, is Simply Safe Dividends’ look at relevant data for each of the portfolio’s companies: 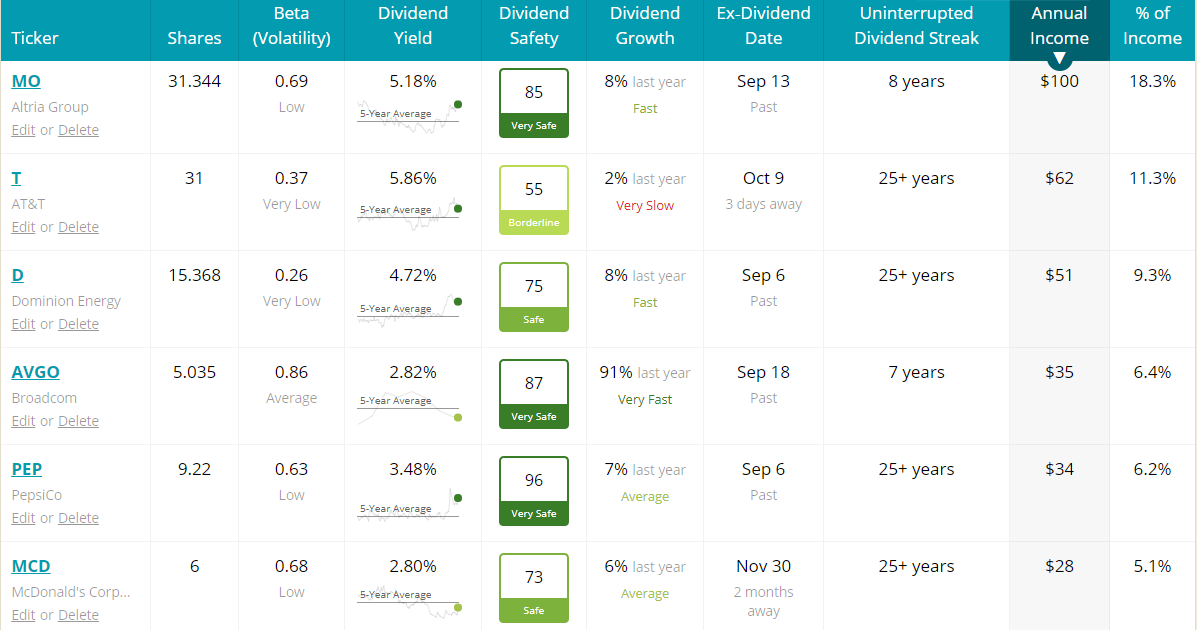 I’m not a big “beta” guy, but I know that some investors like this measure of volatility so I included it in the above table.

Daily Trade Alert’s article on my next IBP stock selection will be published Saturday, Oct. 13; the company I choose might be new to the portfolio, but I also could double-up on an already existing position if I find valuation compelling enough.

For example, Pepsi has pulled back some since it announced Q3 earnings on Tuesday, Oct. 2. Results were OK but not great, with the main sticking points being a 14% decrease in North American beverage sales and a slight lowering of full-year EPS guidance to $5.65.

Long-term, I remain high on the company, particularly its excellent snack-foods division, and this price decline has lifted Pepsi’s yield to 3.5% while making it a better value.

Broadcom, a stellar performer since it recently was added to the Income Builder Portfolio, still seems attractive.

Morningstar rates it a 4-star buy, with a $300 fair value estimate, and I like AVGO’s low forward P/E and PEG ratios. 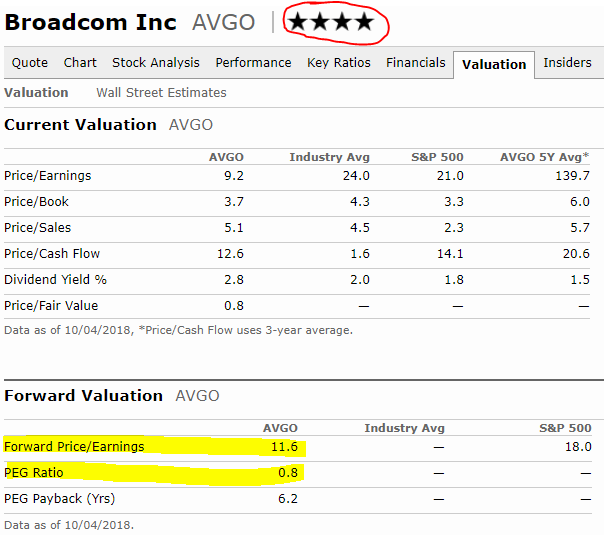 Despite experiencing very nice unrealized capital gains since joining the portfolio, Apple and Disney also appear to be reasonably valued with forward P/E ratios of about 17 and 16, respectively.

How well do you think their products and ventures will fare during the upcoming holiday shopping season? If your answer is “Great!” that just might be a buy signal.

Dominion has been trading in a narrow range and still looks like a decent buy if I want to increase the IBP’s exposure to one of its utility positions.

I doubt I will add to either of the Income Builder Portfolio’s two highest yielders, AT&T and Altria, because we have enough of both for now. But they remain relatively inexpensive and tempting. 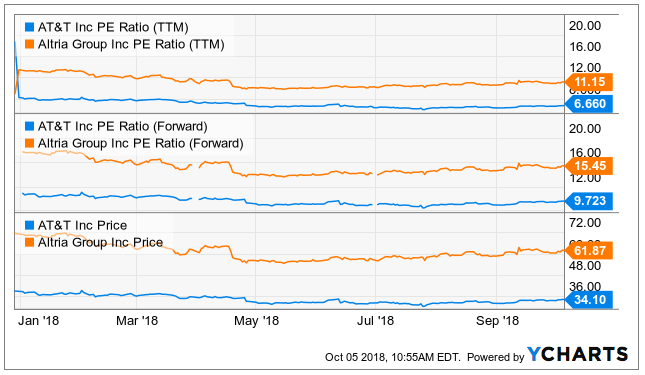 Please remember that we in no way are suggesting that anybody recreate the IBP stock-by-stock.

The idea behind this real-money, real-time endeavor is to present candidates for investment and to demonstrate the process of building a DGI portfolio.

Nevertheless, I obviously am pleased with the IBP’s performance so far.

The income stream is growing beautifully, and the portfolio has experienced market-beating total return. I mean, what’s not to like?