A few days ago, Comcast became the successful bidder in an auction for Britain’s Sky TV, which will give it an overseas foothold in cable and Internet distribution.

With a current yield of 2.1%, fast dividend growth, and selling at an attractive valuation, Comcast is a company well worth considering for dividend growth investors.

Let’s take a look at Comcast in more detail, starting with its dividend.

Comcast would be classified as a low-yield, fast-growth DG stock.

Its dividend growth rate, however, has been very fast. Its 5-year CAGR of 15% per year was topped by its increase earlier this year of almost 21%. 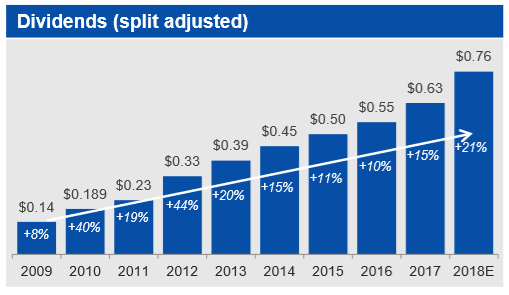 Comcast gets a high dividend safety score of 92 from Simply Safe Dividends. That rates as Very Safe, meaning that a cut is extremely unlikely. (For more insight into dividend safety, see Dividend Growth Investing Lesson 17.) 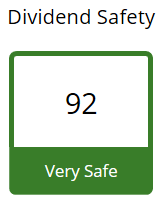 Here is a summary of Comcast’s dividend record.

From humble beginnings as a small 1960s-era cable company in Mississippi, Comcast has grown into a media, entertainment, and technology giant.

• Comcast Cable (also referred to as the Cable Communications segment) is one of the nation’s largest providers of video, high-speed Internet, voice, and security and automation services, including service bundles, to residential customers under the Xfinity brand. The services are also provided to business customers. This segment provides about 60% of Comcast’s revenue through around 29 million customer relationships.

Comcast also owns a few other comparatively small business interests, such as the Philadelphia Flyers (NHL hockey franchise), Wells Fargo Center in Philadelphia, and a wireless phone service launched in 2017.

Comcast has grown not only organically, but also though major transformative acquisitions or joint ventures as well as small “bolt-on” acquisitions.

Comcast has purchased many local cable systems over the years to build that side of the business.

Its merger with AT&T Broadband in 2001 helped form the largest cable company in USA.

Comcast formed a joint venture with General Electric in 2009 (which became full ownership in 2013), that resulted in the acquisition of the NBC Universal business plus the iconic building at 30 Rockefeller Plaza where NBC is headquartered.

Over the past weekend, Comcast won an auction conducted by UK regulators to acquire 69% of Sky, the British cable/Internet/phone provider, for $39B. Fox, its bidding opponent for that 69%, currently owns the other 31% of Sky, but having lost the auction, Fox has decided to tender or sell its shares to Comcast. That will cost another $15B.

If Comcast completes the deal, it will add 23M customers to its stable, not only in Britain, but also Ireland, Italy, Germany, and Austria.

The huge stakes in the Sky battle helped cause Comcast’s stock price to fall earlier this week, improving its valuation. More on that later.

Comcast’s stated capital allocation priorities are pretty standard. As is obvious from its history, including the successful bid for Sky, Comcast is a company that has grown primarily through acquisitions.

Here is the summary of Comcast’s business quality rankings:

Value Line gives Comcast a good Financial Strength Grade of A, which is its 3rd-highest ranking level. Let’s look at some key financial categories and see whether we agree.

Return on Equity (ROE) is a measure of financial efficiency. ROE is the ratio of profits to shareholders’ equity (also known as net assets or assets minus liabilities).

The average ROE among Dividend Contenders is 20%, and for S&P 500 companies it is about 13%. The following chart shows Comcast’s ROE since 2008.

You can see that Comcast’s ROE has been slowly rising for several years, from the single digits into low double-digits. Last year’s steep rise is an outlier.

ROEs often vary from year to year, so I look at ROEs from a long-term perspective. I give Comcast credit for the one-year jump, but overall the record is about average for a large corporation.

Debt-to-Capital (D/C) ratio measures how much the company depends on borrowed money to finance its activities. Companies finance their operations through a mixture of debt and equity (shares sold on the open market or issued to pay for acquisitions) as well as their own cash flows.

High leverage creates risk. The higher the D/C ratio, the riskier the company is. Debt must be paid back, so debt repayments create a constant draw on the company’s cash flows.

At 40%, Comcast has a relatively low debt load, but certainly not negligible. The D/C ratio has been trending slowly up for a few years, but not alarmingly so. Early analyst reports on the Sky acquisition suggest that Comcast will need to increase its debt to pay for the deal.

Operating margin is a measure of profitability. It measures what percentage of revenue is turned into profit after subtracting cost of goods sold and operating expenses.

Per recent research, typical operating margins for S&P 500 companies have been in the 11-12% range. Here’s Comcast’s record, showing profitability levels that are higher than the general averages:

Earnings per Share (EPS) – that is, a company’s officially reported profits per share outstanding – is always of interest. We want to see if a company has had years when it officially lost money, or if its earnings are steadily increasing, declining, or basically flat.

Comcast’s earnings record is unusual: EPS has risen every year for the past 10 years. Undoubtedly this has been helped along by the company’s aggressive share-repurchase program, which we’ll talk about later.

The consensus earnings growth estimate reported by analysts is 16% per year over the next 3-5 years, which is good.

Free Cash Flow (FCF) is the cash a company has left after paying its expenses, including capital expenditures that maintain or expand its asset base. Whereas EPS is subject to GAAP accounting rules, cash flow is a more direct measure of money flowing through the company.

As with EPS, the significant number to examine is the per-share amount, and again we look for trends.

Comcast’s FCF record is good. On this 10-year chart, FCF has been positive every year, including the recession years of 2008-2009. FCF has risen in 7 of the past 9 years. 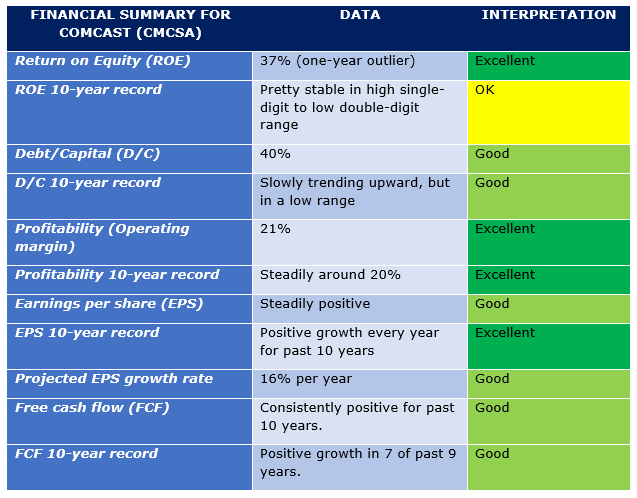 Overall, I think I would rate Comcast’s financials better than Value Line, maybe up a notch to A+. Almost all categories are in the green range, and several are excellent.

The basic valuation estimate uses a price-to-earnings (P/E) ratio of 15 (the historical long-term P/E of the stock market) as a baseline “fair value” reference. That’s shown by the orange line on the following chart. The black line shows Comcast’s actual price. 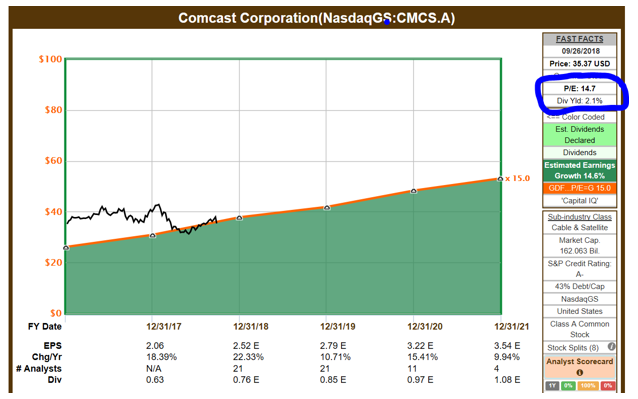 Comcast’s actual P/E is 14.7 (circled), which is just slightly below the 15 used to draw the orange reference line. So this valuation method suggests that the stock is just slightly undervalued.

To calculate the degree of undervaluation, we make a ratio out of the P/Es: 14.7 / 15 = 0.98. In other words, Comcast is undervalued by 2% as estimated by this first method. I consider that to be in the fiar-value range.

Note that I round all dollar amounts to the nearest dollar. That’s to help avoid creating a false sense of precision in making valuation assessments. 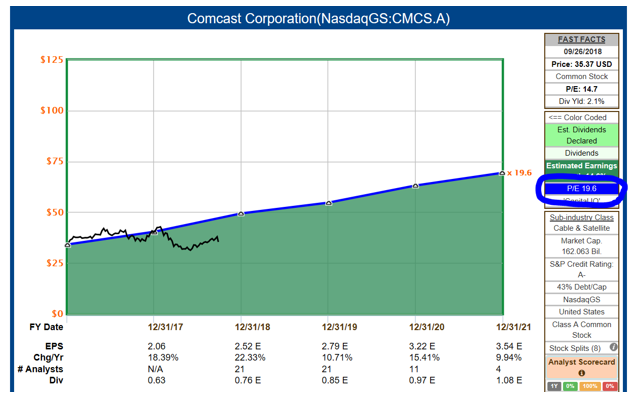 This view presents a very different picture. That’s because Comcast’s 5-year average P/E valuation of 19.6 (circled) is much higher than the market’s historic average of 15 used in the first step.

Using the same calculation methods as above, therefore, we get different results. Comcast is 25% undervalued, which is a significant degree, and its fair price is $47 under this second approach.

Step 3: Morningstar Star Rating. Morningstar approaches valuation differently. They ignore P/E ratios and instead use a discounted cash flow (DCF) model for valuation. Many investors consider DCF to be the best method of assessing stock valuations.

Morningstar’s approach is comprehensive and detailed. They make a detailed projection of all the company’s future profits. The sum of all those profits is discounted back to the present to reflect the time value of money. The resulting net present value of all future earnings is considered to be the fair price for the stock today.

Morningstar gives Comcast 4 stars on their 5-star scale, meaning that they consider Comcast to be undervalued.

Morningstar calculates that Comcast is selling at a 16% discount, and that it has a fair price of $42.

Step 4: Current Yield vs. Historical Yield. My last step is to compare the stock’s current yield to its historical yield.

This way of calculating fair value is based on the idea that if a stock’s yield is higher than usual, it may indicate that its price is undervalued (and vice-versa). 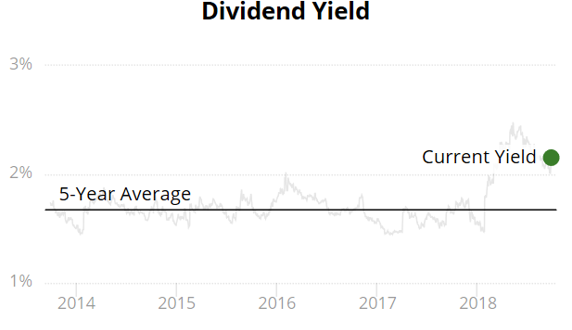 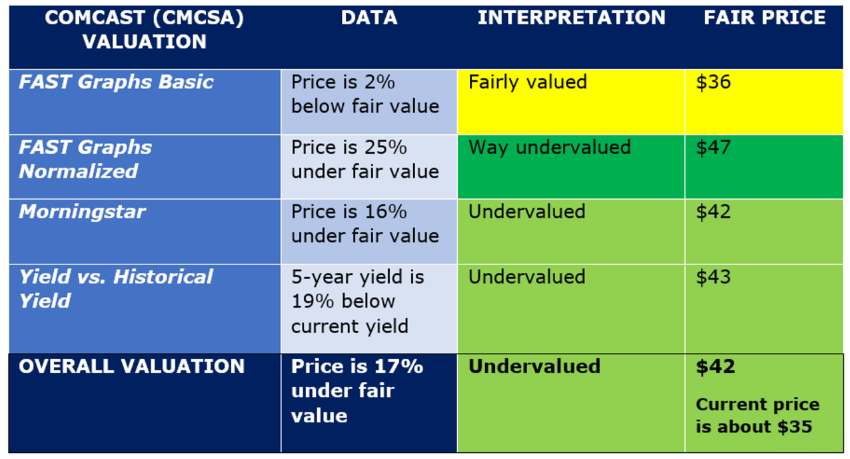 Thus, I conclude that Comcast’s current price is about 17% below the stock’s fair price.

Beta measures a stock’s price volatility relative to the S&P 500. I like to own stocks with low volatility for 2 reasons:

• They present fewer occasions to react emotionally to rapid price changes like sudden price drops that can induce a sense of fear.
• There is industry research that suggests that low-volatility stocks outperform the market over long time periods.

Comcast has a higher-than-average beta of 1.2 compared to the market as a whole (defined as 1.0). That means that its price has been 20% more volatile than the index. This is a negative factor.

In their report on Comcast, CFRA shows the recommendations of 23 analysts who cover the company. Their average recommendation is 4.4 on a scale of 5, where 5 means “buy” and 3 means “hold.” The rating of 4.4 translates to “buy.” This is a slight positive factor.

I like declining share counts, because the annual dividend pool is spread across fewer shares each year. That makes it easier for a company to maintain and increase its dividend. By buying back its own shares, the company is essentially investing in itself and expanding each remaining share into a larger piece of the pie.

Consistent with their stated commitment to buying back shares, Comcast has an attractive record in this regard. Its share count has declined steadily over the past 9 years, 19% in total.

What’s the Bottom Line on Comcast?

And here are Comcast’s drawbacks:

• Cable subscriptions appear to be in long-term decline.
• High-beta stock, more variable than general market.
• Impact of Sky acquisition, assuming the deal goes through, creates a degree of uncertainty.

Overall, I see Comcast as an attractive investment opportunity at this time, especially for investors who are looking for a company with a high dividend growth rate to balance a low yield. Comcast is selling at a sale price.

That said, this is not a recommendation to buy, hold, or sell Comcast. Any investment requires your own due diligence. Think not only about any company’s quality, dividend resume, and business prospects, but also about how and whether it fits your personal financial goals.