Cummins Inc. (CMI) is an Indiana-based industrial powerhouse. Founded in 1919, Cummins is a prominent developer and manufacturer of engines, power systems, and related components. Its products are sold around the world.

Cummins is also a Dividend Contender, with a 13-year dividend growth streak that began in 2006 prior to the Great Recession.

Cummins has a good dividend record.

At 3.2%, Cummins’ yield is mid-range for a dividend growth stock.

At 13 years, Cummins’ dividend growth streak makes it a Dividend Contender on the Dividend Champions document (CCC). The graph below shows the company’s dividend payments since 1998. You can see their increase streak began in 2006, was extremely fast for a few years, and has slowed down the past couple of years.

Cummins’ dividend increase last year was 5.4% and this year’s increase, payable in September, is 5.6%.

Often I would flag (as worrying) the 2017-18 slowdown in Cummins’ rate of dividend growth, but it’s fine in this case, because it comes off several years of very fast growth, which frankly would not normally be expected from an old-line industrial company anyway.

Cummins gets a near-maximum dividend safety score of 98 from Simply Safe Dividends. That rates as Very Safe on their rating scale as shown below. (For more insight into dividend safety, see Dividend Growth Investing Lesson 17.)

I find it noteworthy that Cummin’s dividend payout ratio, as a function of cashflow, is very well controlled at less than 50%. That contributes to the dividend’s safety and makes future increases pretty likely.

The company stated recently that it intends to return 75% of its operating cash flow to shareholders in 2018 in the form of dividends and repurchases. That suggests a commitment to its dividend and dividend growth streak.

Cummins is based in Indiana and markets its products worldwide. It is a worldwide leader in engines, power products, and related components. About 60% of its sales come from the USA and Canada.

The company designs, manufactures, distributes, and services a broad portfolio of power solutions.

Over its 100-year history, Cummins has developed a strong reputation and brand recognition for reliability and durability.

The company reaches its customers through a network of ~600 company-owned and independent distributors plus ~7,200 dealer locations in more than 190 countries and territories.

A strength of the company is its long-standing relationships with many of its customers, including Chrysler, Daimler, Volvo, Paccar, International Truck and Engine Corp. (a unit of Navistar), Ford, and Volkswagen.

Here is how revenues are distributed by segment: 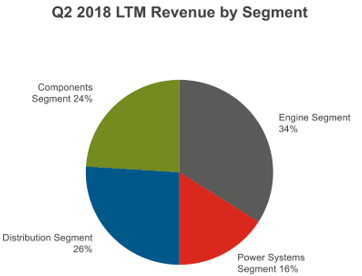 The Engine segment manufactures and sells a variety of diesel and natural-gas engines under the Cummins and other brand names. Customers for these engines range across many industrial segments, including trucks, buses, recreational vehicles, light-duty automotive, construction, mining, marine, rail, energy, defense, and agricultural markets.

The Engine segment also offers new parts and services, as well as remanufactured parts and engines.

Finally, the Power Generation segment offers components that back up and prime power generators, controls, paralleling systems, and transfer switches, as well as A/C generator/alternator products.

Morningstar awards Cummins a Narrow Moat. That rating is based mainly on Cummins’ positive brand recognition and reputation.

I use a company’s credit rating as one of the metrics for judging corporate quality. Cummins has an A+ rating from S&P. That is well into the “investment grade” category.

Here is a summary of Cummins’ business quality rankings:

It is also worth noting that the heavy industry sector in which Cummins operates is traditionally a highly cyclical sector, meaning that companies’ fortunes often vary considerably depending on how well their market’s economies are doing.

Value Line gives Cummins a very good Financial Strength Grade of A+, which is its 2nd-highest ranking level. Let’s look at some key financial categories and see whether we agree.

Return on Equity (ROE) is a measure of financial efficiency. ROE is the ratio of profits to shareholders’ equity (also known as net assets or assets minus liabilities).

The average ROE among Dividend Contenders is 20%, and for S&P 500 companies it is about 13%. The following chart shows Cummins’ ROE since 2008.

You can see that Cummins’ ROE has run in the 20% range for the past few years, although it dipped to 13% last year.

ROEs often vary from year to year. It is important to look at ROE from a long-term perspective. Overall, Cummins has compiled a better-than-average record.

Debt-to-Capital (D/C) ratio measures how much the company depends on borrowed money to finance its activities. Companies finance their operations through a mixture of debt and equity (shares sold on the open market or issued to pay for acquisitions) as well as their own cash flows.

All else equal, the higher the D/C ratio, the riskier the company is. Debt must be paid back, so debt repayments create a constant draw on the company’s cash flows.

At 19%, Cummins has a very low debt load compared to the majority of companies. That record is stable. The company projects only $110 M in interest expense for 2018.

Operating margin is a measure of profitability. It measures what percentage of revenue is turned into profit after subtracting cost of goods sold and operating expenses.

Per a report from Yardeni Research published earlier in 2018, the operating margin across S&P 500 companies is around 11%-12%, as shown in the following graph. 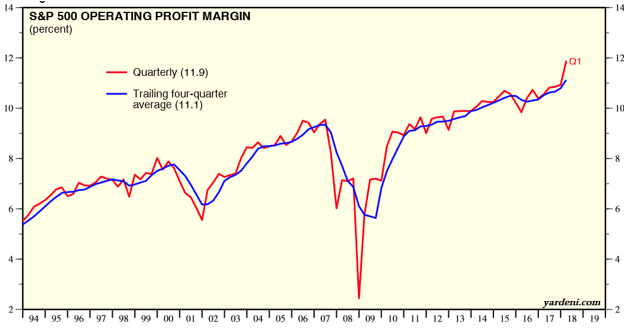 Cummins’ operating margin has been in that average range since the Great Recession that ended in 2009. That’s a decent showing, but not outstanding.

Earnings per Share (EPS) – that is, a company’s officially reported profits per share outstanding – is always of interest. We want to see if a company has had years when it officially lost money, or if its earnings are steadily increasing, declining, or basically flat.

Cummins has a very good earnings record. Its earnings have been consistently positive over the past 10 years, including during the recession years of 2008-09.

Earnings rose in 5 of the last 9 years. The consensus earnings growth estimate reported by analysts is 11% per year over the next 3-5 years.

Free Cash Flow (FCF) is the cash a company has left after paying its expenses, including capital expenditures that maintain or expand its asset base. Excess FCF allows a company to pursue investment opportunities, make acquisitions, repurchase shares, and pay/increase dividends.

As with earnings, the significant number to examine is the per-share amount, and again we look for trends.

Cummins’ FCF record is very good. On this 10-year chart, FCF has been positive every year, including the recession years of 2008-2009. FCF has risen in 6 of the past 9 years. 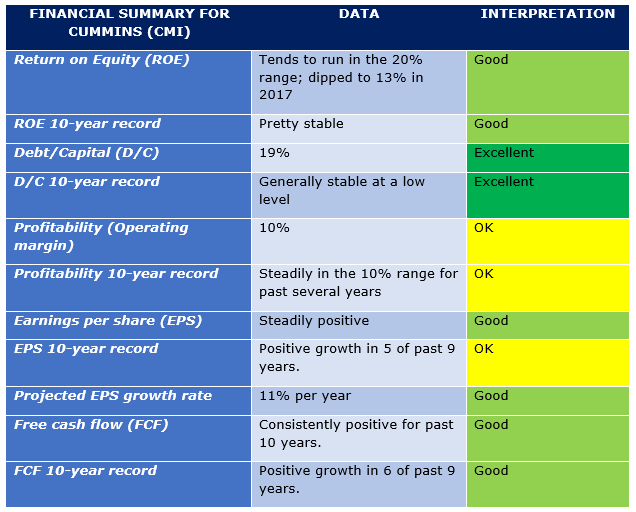 Overall, I have no problem Value Line’s financial grade of A+, although I would probably put it one notch lower (A). Lots of categories are in the green range, and the company’s debt picture is outstanding.

The basic valuation estimate uses a price-to-earnings (P/E) ratio of 15 (the historical long-term P/E of the stock market) as a baseline “fair value” reference. That’s shown by the orange line on the following chart. The black line shows Cummins’ actual price. 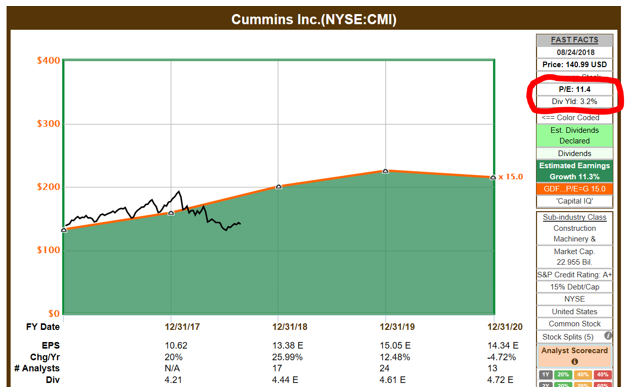 Note that I round all dollar amounts to the nearest dollar. That’s to help avoid creating a false sense of precision in making valuation assessments. 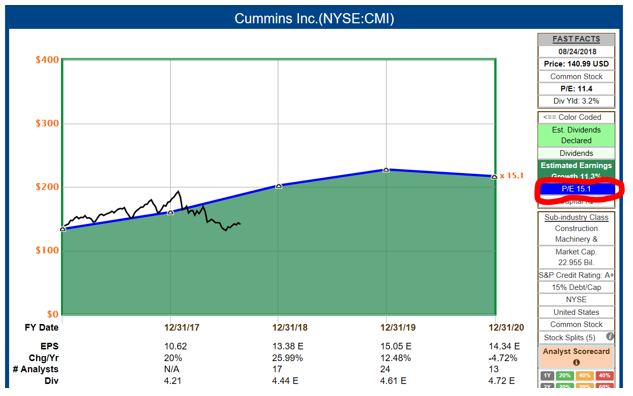 The result is almost the same, because Cummins’5-year average P/E valuation of 15.1 is almost identical to the market’s historic average of 15 used in the first step.

Using the same calculation methods as above, we get practically the same results: Cummins is 25% undervalued, and its fair price is $188 under this second approach.

Morningstar’s approach is comprehensive and detailed; that’s one of the reasons I like it. Morningstar ignores P/E ratios. Instead, they make a detailed projection of all the company’s future profits. The sum of all those profits is discounted back to the present to reflect the time value of money. The resulting net present value of all future earnings is considered to be the fair price for the stock today.

Morningstar gives Cummins 3 stars on their 5-star scale, meaning that they consider Cummins to be fairly valued.

Morningstar calculates that Cummins is selling at an 11% discount, which I would normally call “undervalued,” but they also believe that their calculation has a high degree of  uncertainty. That being the case, they require a higher gap than 11% before they would give it a 4-star “undervalued” rating.

Why do they believe that there is a high degree of uncertainty? While they acknowledge that Cummins’ current operating environment is robust, they don’t necessarily project that into the future.

However, we believe the current operating environment will not be sustained for multiple years and expect any adjustments we might make to our fair value estimate as we update our model would be slightly downward

Morningstar goes on to state that tariffs on commodities (like steel) are likely to hinder Cummins’ margins in the future.

Step 4: Current Yield vs. Historical Yield. My last step is to compare the stock’s current yield to its historical yield.

This way of calculating fair value is based on the idea that if a stock’s yield is higher than usual, it may indicate that its price is undervalued (and vice-versa). 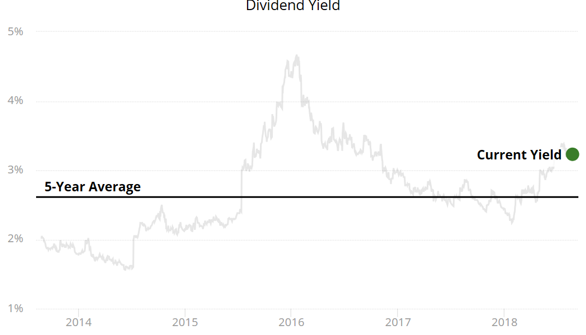 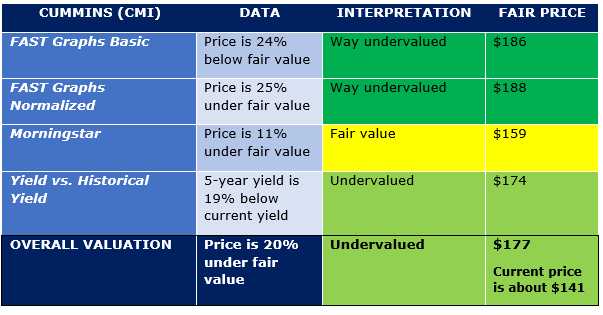 Thus, I conclude that Cummins’ current price is about 20% below the stock’s fair price.

As a comparison point, CFRA has a 12-month price target of $170 on Cummins.

Beta measures a stock’s price volatility relative to the S&P 500. I like to own stocks with low volatility for 2 reasons:

Cummins does not stand out in this regard. Like many industrial companies, Cummins is a cyclical company, meaning that its stock price tends to be reactive to economic conditions, or to mere perceptions of changes in economic conditions.

Cummins has a high 5-year beta of 1.1 compared to the market as a whole (defined as 1.0). That means that its price has been 10% more volatile than the index. This is a negative factor.

Overall, I see these analyst ratings as a neutral factor. Interestingly, CFRA itself (which independently analyzes stocks) has Cummins as a 5-star “strong buy.”

I like declining share counts, because the annual dividend pool is spread across fewer shares each year. That makes it easier for a company to maintain and increase its dividend. By buying back its own shares, the company is essentially investing in itself and expanding each remaining share into a larger piece of the pie.

Cummins has an attractive record in this regard. Its share count has declined steadily over the past 9 years, 15% in total.

In early August, Cummins announced an Accelerated Share Repurchase program to buy $500 M of its stock (about 3.5 M shares at current market prices). This is part of a previously announced repurchase plan, and the company says it’s consistent with the company’s plans to return 75% of operating cash flow to shareholders in 2018 in the form of dividends and repurchases.

What’s the Bottom Line on Cummins?

And here are Cummins’ drawbacks:

Overall, I see Cummins as a pretty attractive investment opportunity at this time, especially for investors who might be seeking to round out their Industrial holdings. The company is solid (but cyclical), and it seems to be selling at a sale price right now.

That said, this is not a recommendation to buy, hold, or sell Cummins. Any investment requires your own due diligence. Think both about any company’s quality, dividend resume, and business prospects, but also about how and whether it fits your personal financial goals.