A friend told me that during a recent trip to the Pacific Northwest, he and his wife toured the Chateau Ste. Michelle winery in suburban Seattle.

After we chatted for a few minutes about what he called a terrific experience, I said: “Do you know who owns that winery? Altria — the cigarette maker.”

I then told my buddy that Altria (MO) also has about a 10.5% stake in Anheuser-Busch InBev (BUD), the world’s largest brewer. 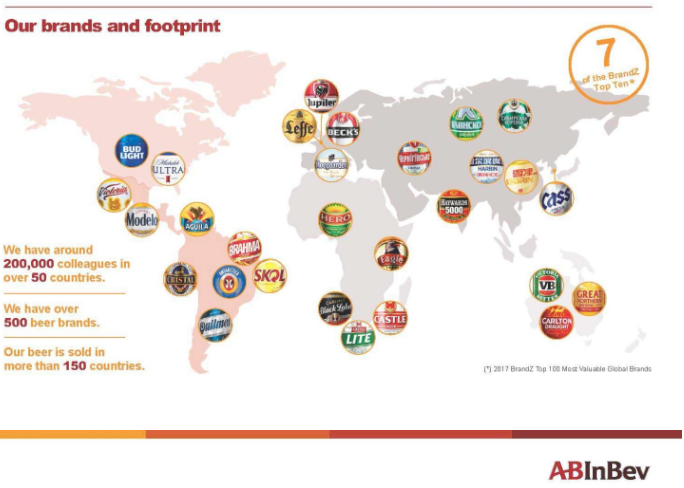 Yes, Big MO is a terrific money-making operation — truly a “sin-stock conglomerate” — and that’s why I selected it for DTA’s Income Builder Portfolio back in February.

Six months later, it’s still a great company … except now it pays shareholders even bigger dividends and is trading at a more attractive price.

And so, for the first time since Daily Trade Alert launched this real-money Dividend Growth Investing project on Jan. 16, I am selecting a company the portfolio already owns.

Come Tuesday, August 28, I will execute a purchase order that will roughly double the size of the IBP’s Altria position, which now sits at 15.34 shares.

Typically, here is where I would offer all kinds of facts and figures explaining why I want to add the company to the IBP.

Fundamentally speaking, however, nothing has changed materially for Altria since we first bought it, so it seems silly to repeat everything.

Instead, I recommend that interested investors read what I wrote BEFORE and AFTER our Feb. 13 buy; those articles not only discussed all the good things about the company but also the risks of owning it.

And then something fabulous and unexpected happened on March 1: Altria announced an out-of-cycle, 6.1% raise, lifting the quarterly payout to 70 cents.

And of course, we continue to reward shareholders by returning significant cash to them through dividends and share repurchases. In March, we raised our dividend 6.1% to reflect final 2017 results and we expect to maintain our dividend payout ratio target of approximately 80% of adjusted diluted EPS.

At the time, some observers wondered if Altria still would do its traditional August raise.

Well, that question was answered on Thursday, August 23, when the company announced it was lifting its payout another 14.3% to 80 cents per share.

The two hikes in the span of less than six months represented a total increase of 21.2% — by far MO’s biggest year-over-year raise since the 2007 PM spin-off — and was the company’s 53rd increase during its 49-year run of annual dividend growth.

In Support Of Dividends

Altria’s earnings per share just go up and up.

The yellow highlight in the following FAST Graphs illustration shows the EPS climb, and the red-circled area indicates that the trend is expected to continue. That’s why MO can be aggressive with its dividend raises while maintaining its goal of an 80% EPS payout ratio. 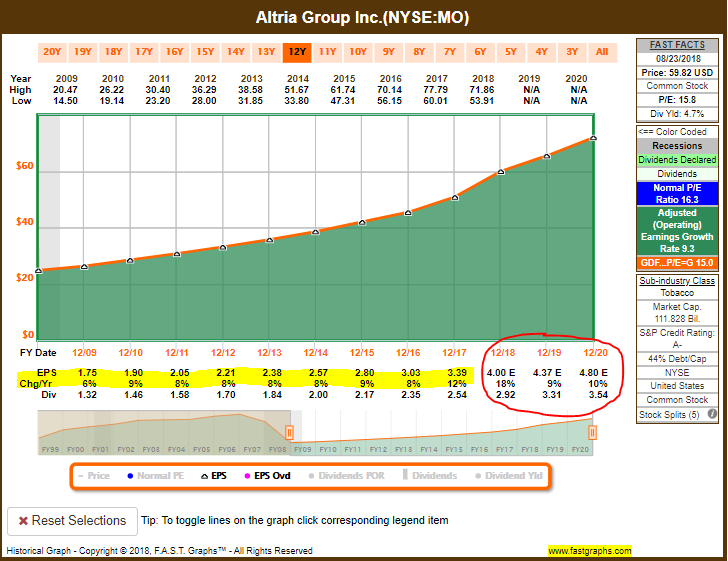 As the following chart from McLean Capital Research demonstrates, even with all of these hikes, Altria’s free cash flow easily covers its dividend.

When I was putting together my list of contenders for the Income Builder Portfolio’s second August buy, Altria had been up there anyway. But when the new dividend was announced, that clinched it.

It’s not every day that an investor can buy any Dividend Aristocrat — let alone one of the great performing stocks in the history of the market — at a yield approaching 5.5%.

Back in February, the IBP bought 15 shares of MO for $65.15 apiece. At the time, I considered the company to be fairly valued, but in retrospect it looks like we overpaid (at least when looking at the short-term results).

Within the portfolio, only our 3M (MMM) position — which we had bought two weeks earlier at what turned out to be the top of the market — has suffered a bigger paper loss than MO.

It’s been a rough go for the tobacco industry overall in 2018.

Philip Morris, in particular, has had disappointing earnings reports … and the market also usually hits MO when its international arm struggles. British American Tobacco (BTI) has gotten stomped, too. 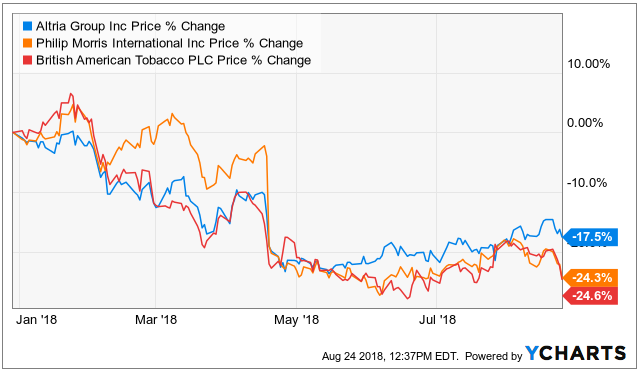 The last few months, however, Altria has recovered some of its 2018 losses and actually has outperformed the overall market (as measured by the S&P 500 Index). 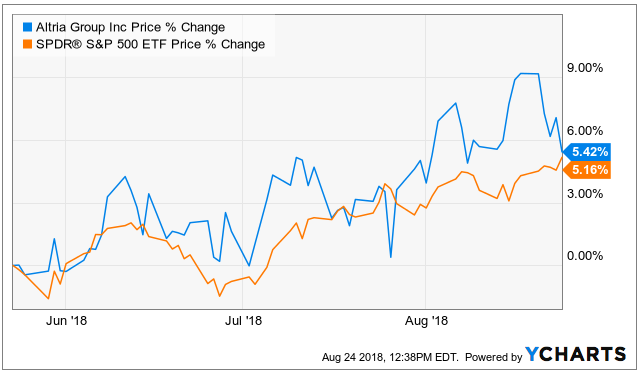 The whole idea of the IBP is to demonstrate how to build a DGI portfolio from scratch.

When new money comes in, every investor must make a decision: Do I buy something I don’t own yet, or do I add to an existing position?

Daily Trade Alert provides $2,000 for two IBP purchases every month. For the first 15 installments of this endeavor, I selected 15 different companies.

This time, I decided that Altria’s story was compelling enough to grab some more. The upcoming buy will immediately lower the position’s cost basis while improving the portfolio’s yield and total income.

By the end of 2019, the Income Builder Portfolio probably will have at least 40 holdings. According to the Business Plan, the IBP cannot have more than 50 companies.

So within a couple of years, adding to existing positions will be the norm, not the exception.

Altria is the same dominant tobacco operation it was when we bought it back in February. 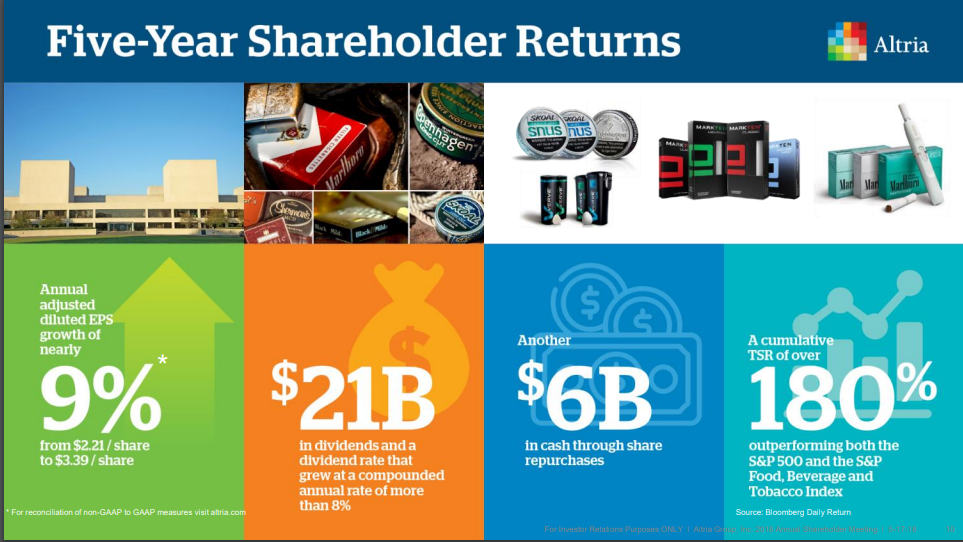 MO still is by far the U.S. leader in cigarette sales (Marlboro alone accounts for 40% of the market), still sells half of all smokeless tobacco products consumed in America, still pockets big profits from its alcohol holdings, and still returns a ton of cash to its investors.

Although I will get into more valuation metrics in my post-buy article that will be published on Wednesday, August 29, Altria certainly is a better deal now than it was back in February.

And I love a good deal on a great business.

Investors are strongly encouraged to conduct their own due diligence before buying any company.