Our real-money, Dividend Growth Investing project had consumer companies, industrials, health-care firms and utilities … but nothing from the sector that literally is shaping the world in which we live.

Well, if that was a “problem,” it has been fixed.

With our purchase of semiconductor titan Broadcom (AVGO) on Tuesday, August 14, three of the last four companies added to the IBP have been from the tech sector. 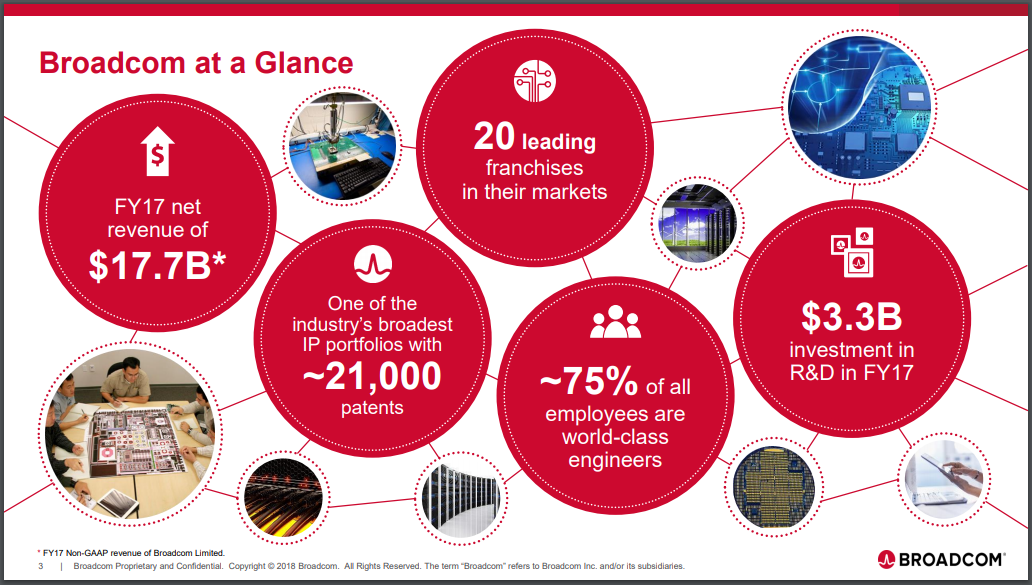 First Apple (AAPL) on June 26, then Microsoft (MSFT) on July 27, now Broadcom. And just like that … tech has tied consumer staples as the portfolio’s most-represented sector.

I think every stock investor should have some growth among his or her holdings, and technology companies are uniquely positioned to provide such growth. As a bonus, tech firms that pay dividends often increase those aggressively, too.

Many DGIs consider tech stocks “too risky,” but it’s hard to argue that Microsoft is any riskier than, say, AT&T (T) — especially when it comes to the reliability of the dividend.

I’ll have more on our newest addition’s dividend in a second. First, let’s talk about the purchase. 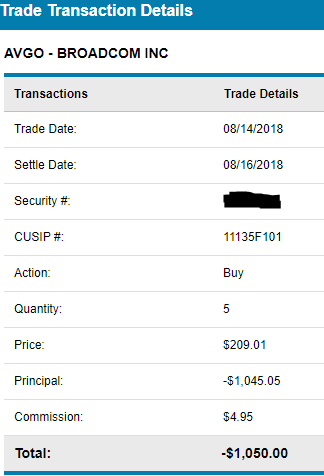 DTA allocates $2,000 per month for two buys, so we will have $950 left for our second August purchase in about two weeks.

Chipmaker Chips In Extra For Shareholders

There are many sound reasons for investors to consider Broadcom. High on the list: eight consecutive years of aggressive dividend increases — including, incredibly, a 291% rise the last two years alone!

Its 3.3% yield is the fourth-highest of the IBP’s holdings, something I wouldn’t have expected from a high-growth tech company. 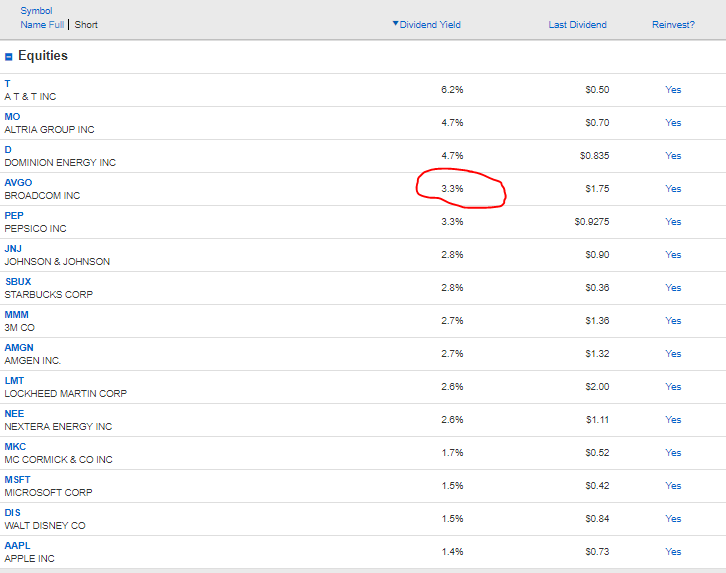 Most recently, AVGO raised its dividend 72% to $1.75 per quarter. Because this purchase was made before the company’s mid-September ex-dividend date, the IBP will receive $8.75 later that month.

As mandated by the portfolio’s Business Plan, all dividends get reinvested right back into the companies that produce them – a no-cost process informally called “dripping.” After buying Broadcom, I instructed the brokerage to “turn on the drip.”

If AVGO is trading at a similar price next month, the $8.75 received will buy about .04 of a new share. Then, things really get fun.

Broadcom historically has announced dividend raises in early December, so I assume it will do so again.

I’m going to get real conservative here and make calculations based on an increase of 10% to $1.93/quarter — but really, it could be double or triple that (or even more).

Plus, that new dividend amount would be paid on the new share total of 5.04.

So the IBP would receive $9.73 in income from AVGO in late-December.

That’s almost a dollar more than the payout of just three months earlier — and that’s a super-charged example of how an income stream moves ever higher through DGI.

It also helps explain the name we selected for our portfolio.

By and large, Broadcom is considered undervalued. It had run up in price last year, but its failed courtship of Qualcomm (QCOM) and a pullback within the cyclical semiconductor industry resulted in a decline of about 30% at one point.

Morningstar values AVGO at $300. We added it Tuesday about a buck below Morningstar’s “Consider Buying” price — meaning its analysts believe Broadcom is an especially good value now.

The following two snips indicate that CFRA thinks Broadcom is extremely undervalued. The first shows that its analyst values the stock at more than double our purchase price. The second shows the analyst’s opinion that AVGO is a Strong Buy with a 12-month target of $282.

Argus calls AVGO a buy at any price lower than $300.

Ford Equity Research’s forecast is for AVGO to “strongly outperform the market over the next 6 to12 months.” 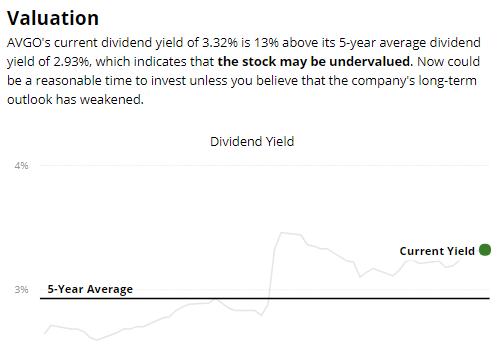 Thomson Reuters polled analysts, who believe AVGO’s price is headed higher. The mean estimate is $288, and even the lowest estimate ($220) is more than we paid Tuesday for the IBP’s shares.

FAST Graphs shows that Broadcom’s price/earnings ratio of 11.1 is well below its normal P/E of 14.9. 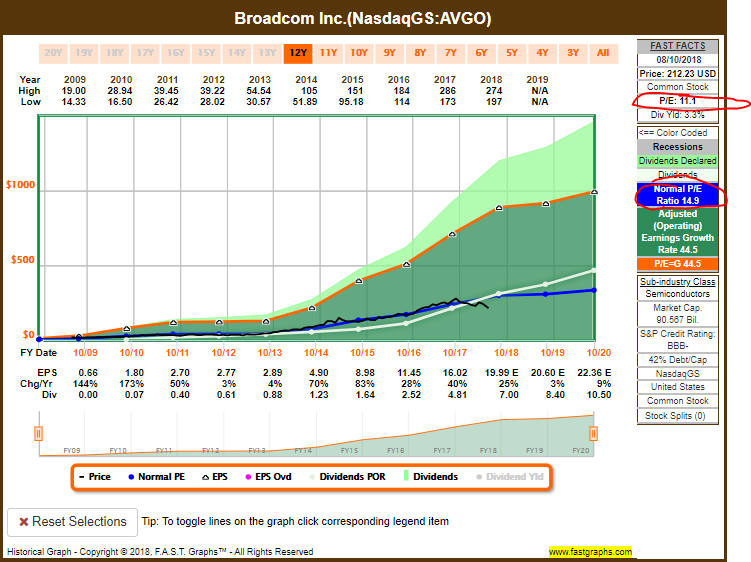 Free cash flow is important to DGI practitioners because dividend increases depend upon FCF growth.

As the upward-moving orange line in the FAST Graphs illustration below indicates, AVGO has been an FCF-growing machine — which helps explain why Broadcom is considerably undervalued relative to its historic price/free cash flow. 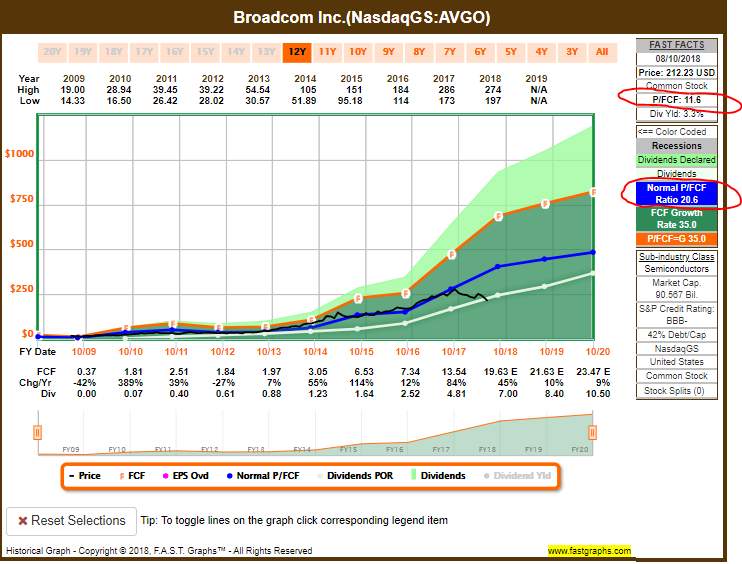 Not every analyst considers AVGO to be worth buying. Schwab’s equity rating grade for Broadcom is an F — even worse than the grades I used to get in high school! — and it is predicting the company will “strongly underperform” the market going forward. 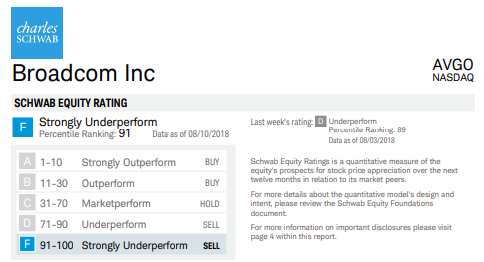 Obviously, I wouldn’t have selected Broadcom as the Income Builder Portfolio’s 15th holding if I agreed with Schwab’s extremely bearish take on the company’s prospects.

In fact, because I only ask Daily Trade Alert to buy stocks that I also own, I initiated an AVGO position for my personal portfolio later Tuesday afternoon.

For those who might be uneasy owning any tech company — let alone one in a cyclical industry such as semiconductors — maybe Broadcom isn’t for you.

Over the long haul, however, I do feel AVGO will be a good holding for the IBP — and for me! I expect solid total return, thanks in great part to the company’s rapidly growing dividend.

As always, I highly recommend each investor do his or her own research before buying any stock.