If an optimist – or a public-relations person – looks at the following graphic, he or she might talk about the veritable Who’s Who of technology firms that led to the creation of Broadcom (AVGO) in its current form. 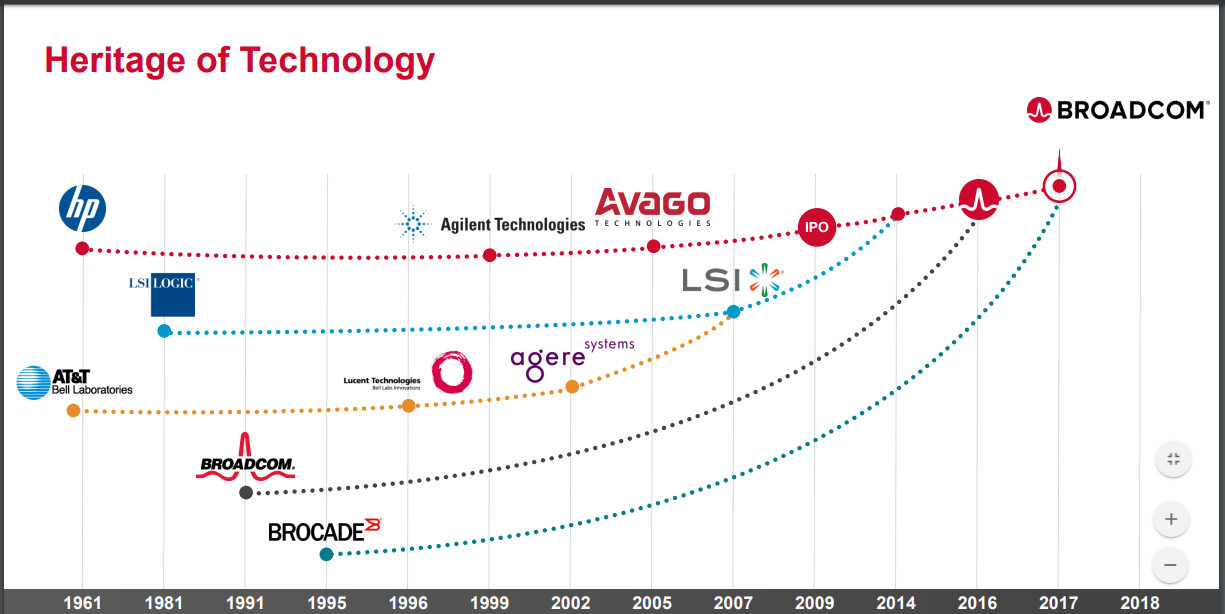 I have a more visceral reaction.

As the last millennium wound down, well before I settled on Dividend Growth Investing as my preferred strategy and learned how to research companies I was considering for my portfolio, I scooped up the trendiest tech firms — including Lucent, Agere and LSI Logic.

After all, it was the “New Frontier” of investing.

Oops. The next thing we knew, millions of us were trying to survive the dot-com bust, kicking ourselves for chasing the latest fad.

Well, I like to think that this time it really is different.

Not because folks again believe earnings and profits and valuations don’t matter, but because this time more of us realize how important those things are.

Which brings me to Broadcom, the world’s fifth-largest semiconductor company. 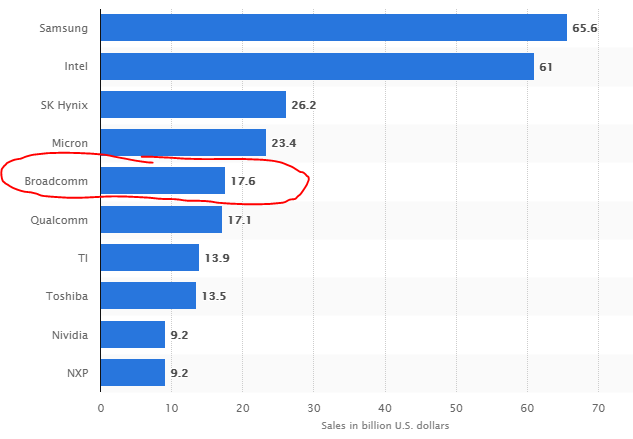 Through all of its merger and acquisition activity of the past two decades, AVGO is now fundamentally strong, highly profitable and well run.

It’s not easy to find fairly valued companies with significant earnings growth, aggressive dividend growth, and a yield north of 3%.

That’s a heck of a combination, and it’s why I have selected Broadcom as the next addition to DTA’s Income Builder Portfolio.

Come Tuesday, August 14, I will execute a purchase order of about $1,000 worth of the semiconductor giant’s stock for our real-money DGI endeavor.

Broadcom Getting Even Broader

This actually is not the first time I have mentioned Broadcom during my nine months writing for Daily Trade Alert.

Back in February, I profiled 12 technology companies that offered “a little something for everyone.”

AVGO was not one of my chosen dozen, and I explained why I was avoiding it and fellow chip-maker Qualcomm (QCOM):

Both are priced below fair value, have P/E ratios lower than their 5-year averages and excellent 5-year DG rates. Broadcom just raised its dividend by nearly 72% and analysts like it. QCOM’s yield exceeds its 5-year average, it gets a 2 for Safety and it has an A credit rating.

Well, Broadcom is trying to buy Qualcomm, which has repeatedly rebuffed its rival’s overtures. Meanwhile, QCOM has spent more than a year trying to acquire NXP Semiconductors (NXPI).

Too many moving parts. Too much unknown.

Since writing that, Broadcom gave up its pricey pursuit of Qualcomm.

I think that’s good news, because the acquisition would have given AVGO a ton of debt, and I feared the combined company would have spent an inordinate amount of time and money battling litigation and regulation.

Broadcom instead decided to buy CA Technologies (CA) in an $18.9 billion all-cash deal. 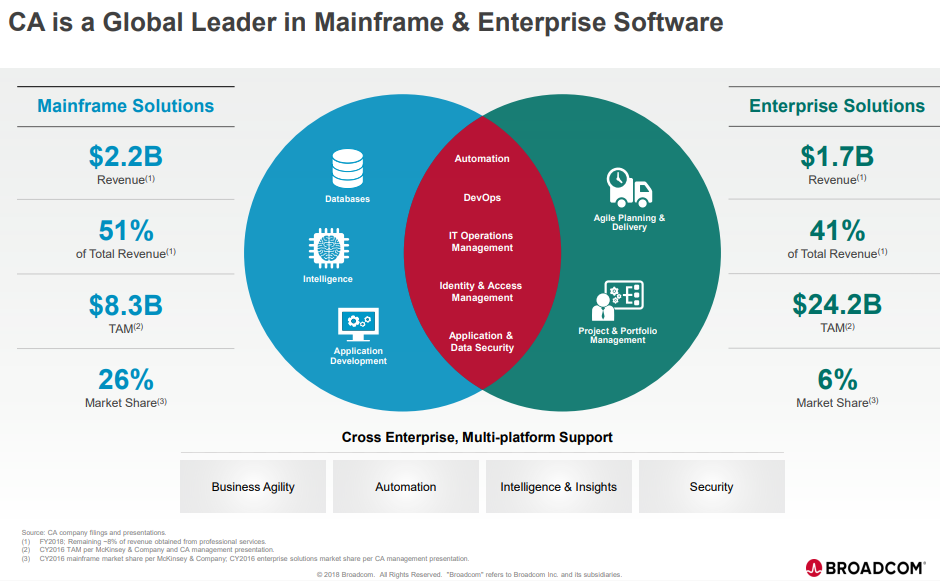 I certainly am no expert on mainframes in general or CA in particular, so I’ll share what Morningstar had to say about the acquisition:

Four months after the firm’s failed attempt to acquire Qualcomm, Broadcom is back in the M&A mix, though this deal doesn’t have any clear synergies, in our view. CA is a key vendor of IT management software and solutions for mainframe infrastructure and enterprises. The deal has all the signs of a typical Broadcom deal, including: a modest premium (20% over closing price on July 11); high profitability (85.8% gross margins last year), while adding to Broadcom’s treasure trove of market-leading franchises. Despite a lack of meaningful growth, the potential for cost-cuts and stable performance of CA’s mainframe business should allow for solid non-GAAP EPS accretion. The deal represents a 27% premium to our fair value estimate of $35 for CA, which we think is a reasonable premium for Broadcom shareholders.

Here is what Broadcom CEO Hock Tan said about the deal:

I read this acquisition as AVGO wanting to be more of a business technology conglomerate, able to offer a wide range of products and services besides semiconductors.

The graphic I used early in this article illustrates AVGO’s roots. The present company is mostly the result of the 2016 mega-merger between Broadcom and Avago, and explains the firm’s stock symbol.

Broadcom has four divisions, as shown in the following slide from a recent corporate presentation. 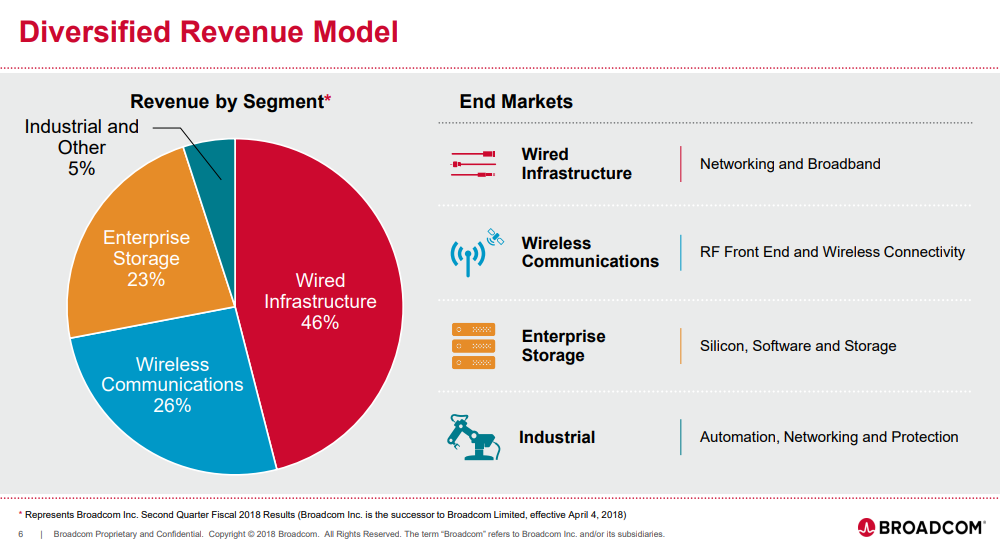 Superb performance is the norm for the company.

Since AVGO went public in 2009, it has never had a quarter in which it failed to exceed or meet earnings expectations. Indeed, since Q3 of 2011, it has beaten expectations every time – 28 quarters, 28 beats. Impressive. 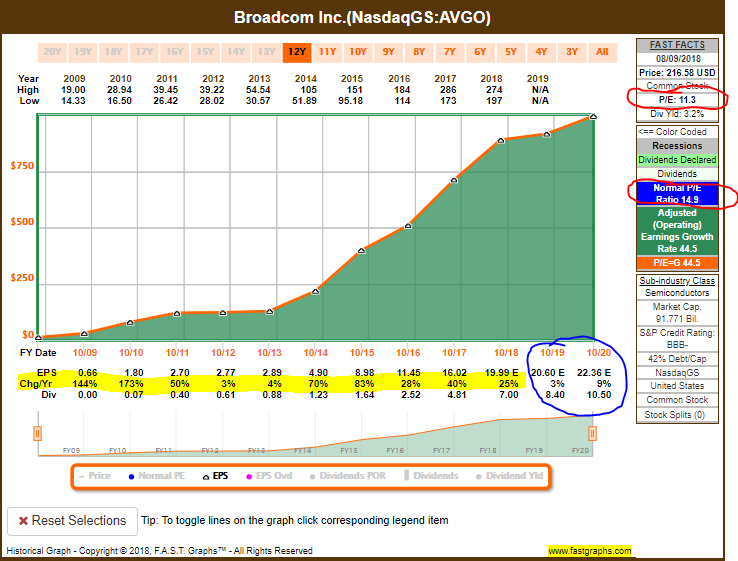 The yellow highlight shows the steady (and sometimes spectacular) EPS growth. The blue-circled area indicates that earnings are expected to slow a little the next couple of years due to the CA acquisition, debt management and industry-specific issues.

I will discuss valuation thoroughly in my post-buy article that will be published Wednesday, August 15, but you can see by the red-circled data that AVGO is trading well below its normal P/E ratio.

The company has been paying a dividend since 2010, and for several years it raised the payout every quarter, usually by a penny or two. 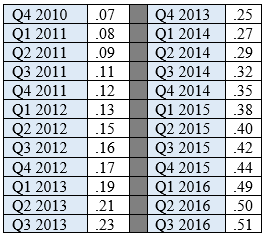 Then, on Dec. 8, 2016, not long after the Avago-Broadcom merger was completed, the company really got serious about its dividend — doubling it to $1.02.

Here’s what Hock Tan said in that day’s conference call with analysts:

We are comfortable that our projected free cash flow generation will support this significantly higher return to shareholders, while still preserving flexibility on our balance sheet for future M&A opportunities.

Tom Krause, the company’s chief financial officer, expounded on that:

… As we look at the landscape versus the scale of our projected free cash flow generation, we feel that we have reached the point where it makes the most sense to return a more meaningful portion of our cash flow to shareholders in the form of dividends.

The substantial increase in our dividend announced today is the first step. Long-term, we plan to target aggregate dividends of approximately 50% of free cash flow on a trailing 12-month basis. Given our free cash flow generation, we believe that this will also allow us sufficient balance sheet flexibility to pursue opportunistic acquisitions that are consistent with our proven business model.

As a result, the dividend has continued to skyrocket. 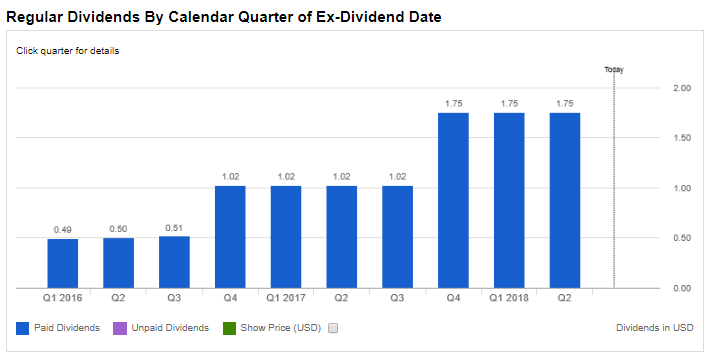 So there might still be some room for another massive dividend hike before the payout hits the 50%-of-FCF mark that Krause mentioned.

After that, dividend growth should roughly track annual FCF growth, projected to be 10% to 15%. Nothing wrong with that!

The other two tech firms in the Income Builder Portfolio — Microsoft (MSFT) and Apple (AAPL) — are yielding 1.5% and 1.4%, respectively.

Although most investors know that farm equipment, airplanes, housing and oil are examples of cyclical industries, they might not be aware that the same is true of semiconductors.

As a result of that cyclicality, there can be some huge price swings.

Broadcom relies upon Apple for about a fifth of its revenue, and J.P. Morgan analyst Harlan Sur says AVGO will make about $10 per iPhone.

That’s wonderful … as long as Apple doesn’t decide upon a different supplier. There are no rumors that will happen, but if it did AVGO’s price would suffer greatly.

Just a few months ago, a report that Apple would slow down iPhone production led to a rapid 5% price decline for Broadcom. The red-circled area in the chart below shows that movement.

Additionally, a deal-making company like AVGO tends to keep investors on their toes.  For example, the announcement of the CA acquisition sent shareholders to the exit, as indicated by the green-circled area. 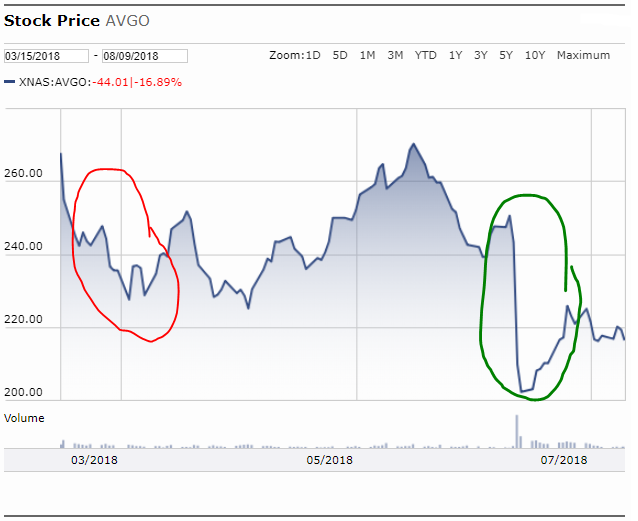 Standard & Poor’s gives Broadcom a credit rating of BBB-, the lowest score a company can receive for its bonds to still be considered “investment-grade.”

I usually prefer at least BBB+, but I am encouraged that S&P affirmed its rating after the CA acquisition and said AVGO has a “stable outlook” — in other words, a rating cut is not in the offing as long as the company manages its debt properly.

Value Line gives Broadcom middle-of-the-road scores of 3 for Safety and B++ for Financial Strength.

Obviously, Broadcom is not a “care-free” investment that will see price gains week after week, month after month and year after year.

Of course, if we knew any stock that guaranteed such a performance, we’d put all of our capital there, make our billions and retire happily to our enclaves in Maui and Monaco.

After pointing out the risks to owning Broadcom, I think it’s important to remind everybody that the company is growing and the industry is thriving.

Then there’s this: Simply Safe Dividends calls AVGO’s dividend “Very Safe,” with a 91 score on its 1-100 scale. For any DGI proponent, such dependability is critical.

Yes, as always, there are pros and cons to every investment.

I feel good enough about Broadcom’s “pros” to make it the Income Builder Portfolio’s 15th component.

Each investor is strongly urged to conduct his or her own due diligence.