Whether I’m taking swings on a golf course, walking my pup on a hiking trail, cheering on my Carolina Panthers, umpiring youth baseball, or just sipping a craft beer in my screen porch, September is a great time to be outdoors in my adopted hometown of Charlotte.

Because the great weather is always screaming at me – “Get outside, ya bum!” – I spend less time in my home office researching and buying stocks.

But here’s the deal: Even if I’m busy hooking a 5-iron out of bounds or scooping up doggy doo-doo, I’ll be buying stock on most September weekdays.

Twenty-five of the 48 companies I own pay dividends during September, and I’m a big believer in reinvesting those Divvy Dollars – a no-cost, no-fuss, no-muss process commonly called “dripping.”

Since the start of the year, I have been putting together the Income Builder Portfolio, a real-money Dividend Growth Investing initiative on behalf of Daily Trade Alert.

As stated in the IBP Business Plan, all dividends get reinvested into the companies that made the payouts.

Our most recent purchase was Microsoft (MSFT), which is due to make its next dividend payment on Sept. 13. The IBP will receive 42 cents for each of its 9 shares, and that $3.78 will then buy a fraction of a new share of MSFT.

As I said in the article: “That’s the compounding power of DGI … and the reason this endeavor is so aptly named.”

It’s one thing to talk about the compounding power of DGI, however, and another to see it work in the real world.

Microsoft is a company I have had in my personal portfolio since 2015, and I thought a look at my MSFT holding’s dividend action over these last 3-plus years might better demonstrate the compounding power of DGI.

I initiated my position in March 2015, when I bought 217 shares at $41.34 apiece (including commission). Paying a quarterly dividend of 31 cents at the time, the yield was exactly 3%.

The table below shows the dividends my position produced, the shares that arrived via dripping every three months, and the current value of those shares (using the $108.04 price at market close of Friday, August 3).

In addition to my initial stake (orange shading), I also made three other buys (in gray) with outside money. 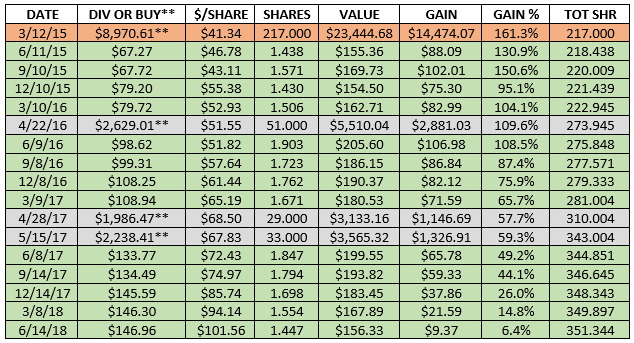 In the summer of 2016, a year after I initiated my position, MSFT was still trading at less than $52. The price has more than doubled since, and it’s now yielding only 1.6%.

For much of the last two years, Microsoft has been considered “overvalued” by the majority of analysts. Nevertheless, every single dividend reinvestment during that time has turned out to have been a bargain buy.

Wouldn’t you love to buy Microsoft at any of those price points now?

One thing I really like about dripping is that it takes my occasionally troublesome brain out of the equation.

Had I given it much thought, I might have decided not to use the $108.25 dividend I received in December 2016 to buy new shares of MSFT.

After all, the 20 P/E ratio back then was higher than any time since before the Great Recession.

But because I had instructed my brokerage to reinvest the dividends when I first established the position, I received 1.762 shiny new shares at $61.44 apiece … and I didn’t even have to pay a commission.

My gain on that purchase has been 76% — about triple the return of the S&P 500 Index in the same span.

The following table shows the total benefit I experienced from having dripped Microsoft over these past 3 ½ years.

Yes, the price appreciation has produced most of my position’s 120% gain. Still, dividends (and reinvested dividends) have accounted for 6.1% of the current value, and that’s hardly insignificant.

Back in December, I introduced the IBP and thoroughly detailed the benefits of dripping, so I won’t revisit all of that now.

Nor will I claim that my way is the only way.

Some folks, especially seniors on fixed income, use their dividends for living expenses and entertainment. Indeed, that’s what my wife and I plan to do once we go on permanent vacation.

Others pool their dividends until they accumulate “X” amount of money, and then they buy stocks they consider attractively valued — a method my DTA colleague Dave Van Knapp calls selective reinvestment.

Still others commit dividend income to their cash reserves. They might be waiting for the next recession, they might be fortifying their emergency funds, or they might be building a big enough cash pile to do the old Scrooge McDuck thing. 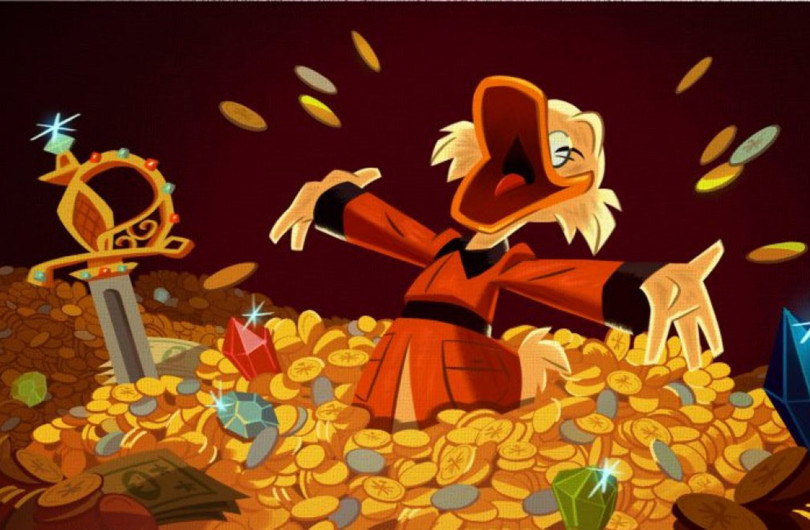 They’re Not All Microsoft, Darn It!

I selected MSFT as my example for this article because it happens to be the most recent company to join the IBP.

But I could have chosen almost any stock I own, as I drip just about every position. I like the businesses I’ve partnered with, and I always want more of ’em!

September is a great month for dripping, but the same is also true of December, March and June. Heck … the other eight months aren’t half-bad, either!

Having said that, few companies have seen the kind of up-up-and-away price gains that Microsoft has.

Short-term, I might not have gotten “bargains” on every single one of my drips, as has been the case with my MSFT position. Long-term, however, I’m confident that this will turn out to have been a great way to build my income stream.

People with less than $100,000 invested almost certainly are better off dripping to gradually build positions and reduce commission costs.

The Income Builder Portfolio represents just such an account.

The IBP is not even 7 months old. It is worth roughly $14,000. There is a looooong way to go before the compounding power of DGI really takes effect.

And that’s quite all right.