In Austin Powers: International Man of Mystery, Dr. Evil thaws out after having been cryogenically frozen since the 1960s. He’s ready to resume his role as the embodiment of evil, threatening to blow up Earth unless he is paid a hefty ransom of … 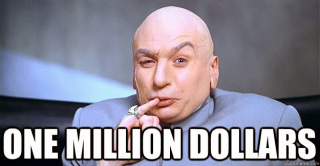 Mike Myers, the actor who played both Dr. Evil and Austin Powers in the 1997 James Bond parody, talked to the Hollywood Reporter last year about that oft-quoted catchphrase:

It is always a surprise which lines are people’s favorite. The “one million dollars” has been the one that is so satisfying because it is sort of a fragile joke. The fact that Dr. Evil has been frozen, he is out of date and a million dollars is not much money. It restores your faith in audiences. And it has really stayed in the culture.

If that seemed a ridiculously low ransom demand back then, just think of how tiny (relatively speaking) a million bucks is now.

Jimmy Garoppolo, the San Francisco 49ers’ quarterback who has started exactly 7 games in his pro career, just signed an enormous contract that will pay him some $700K more than that — every single game!

Heck, multi-billion-dollar acquisitions are so common in the world of big business that they’re practically yawn-inducing.

So let’s stop trifling with the kind of money found between corporate couch cushions and talk about some real dough.

Apple (AAPL) is on the precipice of becoming the world’s first TRILLION-DOLLAR company. Three others are not too far behind: Amazon (AMZN), Alphabet (GOOGL) and Microsoft (MSFT). 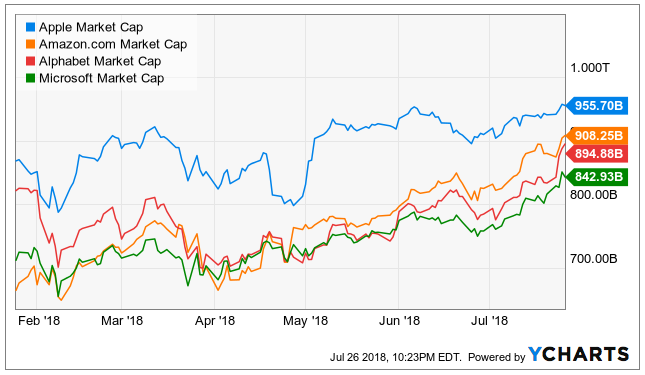 Several analysts believe Microsoft is on a fast track to $1 trillion. Piper Jaffray recently raised its target for MSFT to $130 per share – a price that would push the company’s market cap just over that magic number.

With the company’s sales organization firing on all cylinders and last year’s re-org in rear view, we expect solid execution amid a strong demand environment to drive ongoing double-digit growth.

It’s nice to know that we here at Daily Trade Alert are contributing a little to the cause. (OK, so it’s very little, but that’s not the point!)

Microsoft is the latest addition to DTA’s Income Builder Portfolio, as I executed a market order for 9 shares at $109.59 each on Friday, July 27. 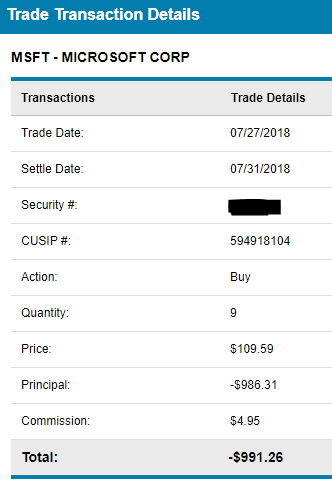 As detailed in my previous article, there are numerous reasons Microsoft is popular with shareholders — including Dividend Growth Investing practitioners.

Microsoft pays a quarterly dividend of 42 cents per share. Because this order was placed before the next ex-dividend date (Aug. 16), the Income Builder Portfolio will receive $3.78 on Sept. 13.

In accordance with the IBP Business Plan, all dividends get reinvested right back into the companies from whence they come – a no-cost process known as “dripping.”

And it only gets better, because Microsoft is due to announce a dividend increase in the coming weeks.

Given the company’s outstanding growth of earnings and free cash flow, as well as its 16-year history of aggressive dividend raises, I’ll conservatively project a 10% hike.

That’s the compounding power of DGI … and the reason this endeavor is so aptly named.

When assessing whether or not companies are fairly valued, sometimes things are obvious and sometimes they aren’t.

For example, when we bought AT&T for the IBP about two weeks ago, it definitely was undervalued.

On the other hand, the IBP’s second-ever purchase — 3M (MMM), back in January — was clearly overvalued, but I selected it anyway. (Although I like the IBP owning such a high-quality company, I do regret the timing now that I can look back with 20/20 hindsight.)

With Microsoft, things aren’t as obvious.

Chuck Carnevale, the respected creator of the FAST Graphs valuation tool, is so convinced that MSFT is extremely overvalued that he recently wrote an article warning shareholders: Your Money May Be In Jeopardy.

However, many analysts believe MSFT is fairly valued … or even somewhat undervalued.

I mentioned a few earlier in my discussion of the company’s drive toward a $1 trillion market cap, but there are plenty of others.

Morningstar has assigned MSFT a fair value of $122, about 11% higher than we paid for it. Its analysts have raised that FVE several times the last couple of years because the company just keeps performing.

Schwab assigns Microsoft a “B” rating, meaning its analysts expect the company to outperform its peers over the coming months. 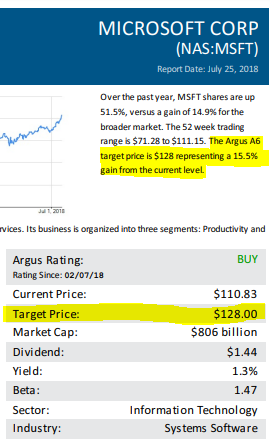 Value Line’s 0.99 “Relative P/E ratio” means it believes MSFT is fairly valued compared to the 1,700 other companies in its analytical universe.

In Reuters’ survey of analysts, the consensus recommendation is “Outperform” (red circled area), and 30 of the 34 surveyed rated MSFT either Buy or Outperform (blue bracket).

But one resolute Microsoft bear (yellow highlight) has been calling it a Strong Sell for months. Those who followed that analyst’s recommendation missed out on a market-crushing 15% gain these last 13 weeks alone — ouch!

We’ll finish our valuation discussion with a look at the FAST Graphs illustration. 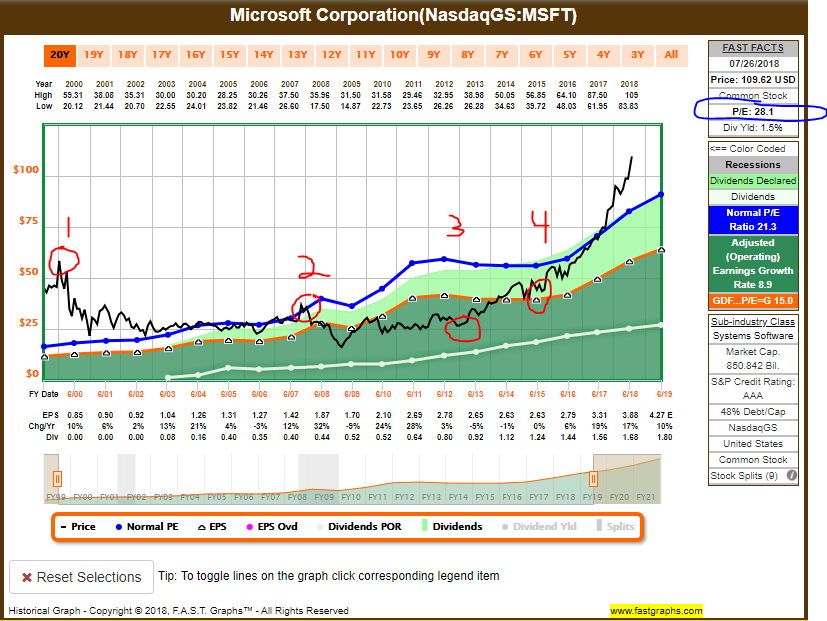 The red-circled areas and corresponding numbers indicate some interesting time periods for Microsoft:

The blue-circled area shows the current “blended P/E ratio” of 28.1 — pricey to be sure, but nowhere near as expensive as it was before the dot-com crash.

Despite that P/E ratio, I can see why analysts are bullish on Microsoft’s prospects. They tout the company for becoming a force in creating, marketing and selling its cloud enterprise — especially its corporate cloud service, Azure. 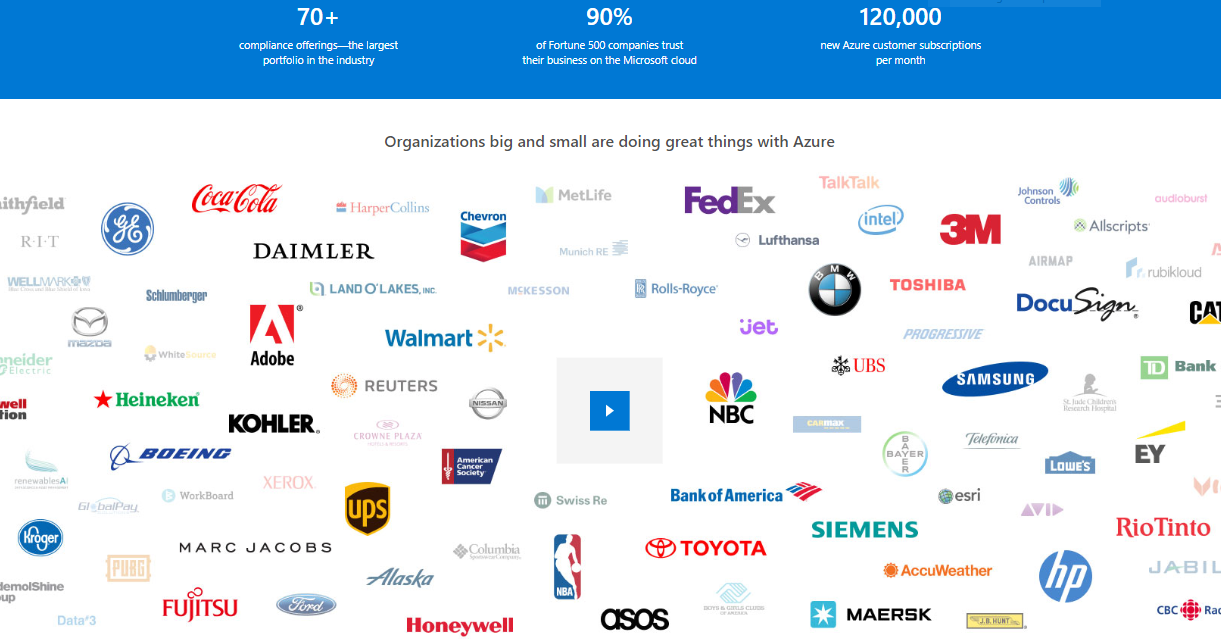 Do be aware that MSFT is not a defensive company and could see significant price declines whenever the next recession comes.

For the foreseeable future, however, there is every reason to believe the company will continue to thrive.

Throw in management’s commitment to paying and growing the dividend, and I am glad that one of the world’s iconic brands is the 14th component of DTA’s Income Builder Portfolio.

As always, this is not a recommendation to buy any stock. Investors should conduct their own due diligence.