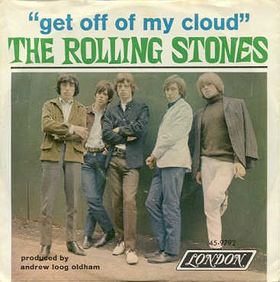 Fortunately for Microsoft (MSFT) investors, it was Nadella and not Jagger who succeeded Steve Ballmer as the company’s CEO in 2014 — nearly 50 years after The Rolling Stones’ Get Off Of My Cloud climbed to No. 1 on the Billboard Hot 100.

The cloud certainly is where it’s at for the world’s 4th-largest company, driving a business that just one generation ago depended largely on sales of software-loaded floppy disks.

I am so excited about Microsoft’s direction that I have selected it as the next company to join DTA’s Income Builder Portfolio.

Come Friday, July 27, I will execute a purchase order on behalf of Daily Trade Alert for about $1,000 worth of the stock.

MSFT will be the real-money portfolio’s 14th company, and its second from the Information Technology sector. The IBP added Apple (AAPL) last month.

If co-founder Bill Gates gets credit for making Microsoft a household name, Nadella deserves a big thumbs up for guiding the company into the modern era by pushing cloud services OneDrive for consumers and, especially, Azure for businesses. 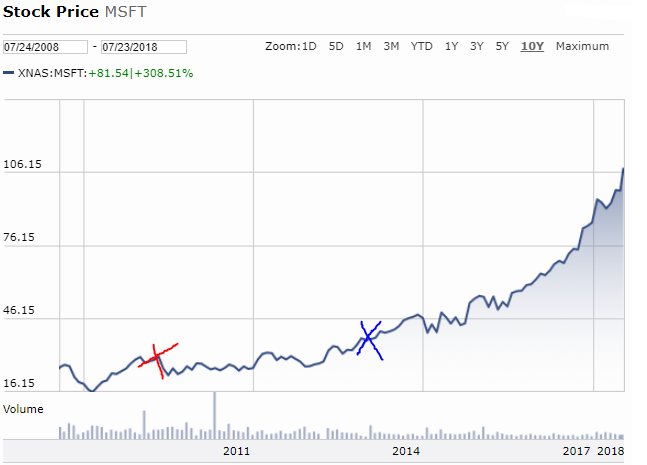 Nadella, who had been executive vice president of Microsoft’s cloud and enterprise division, was promoted to CEO in February 2014.

He brought along some innovative ideas … and, well, look at how the line in that chart above has risen. MSFT closed Tuesday at $107.66, roughly triple its price of 4 1/2 years ago.

I don’t pretend to be an expert on the cloud or any of Microsoft’s other inner workings, so here is some of what the analysts at Morningstar had to say:

Nadella’s vision for Microsoft is a departure from the “devices and services” and “Windows first” mantras under prior leadership, shifting the firm’s priorities to a cloud-first, mobile-first company that embraces developers and enterprises. We think Nadella’s more open approach has helped strike new partnerships and reinvigorate innovation, placing the firm on a steady path. …

We assign Microsoft a wide economic moat. … We view Microsoft’s public cloud offering Azure as a multifaceted service that not only provides substantial growth opportunities, but also serves as a natural hedge from potential declines in other aspects of the business. Azure hosts many of Microsoft’s flagship applications, including Office 365, Dynamics CRM and ERP, Power BI, and more, while offering the on-demand compute power and storage needed by businesses of all sizes to develop, test, and run applications and store data at a much more efficient cost structure. Azure can also be used as an extension of existing on-premises infrastructure, allowing enterprises to shift workloads within a hybrid environment, or it can serve as a landing place for new businesses that will make minimal (if any) investments in their own data centers. … We believe Microsoft has established itself as the clear number-two player in this market and is closing the gap on front-runner Amazon. …

Microsoft’s effective monopolies revolve around its Windows operating system for both client devices and servers and the Office suite of productivity applications. … Microsoft has maintained dominant PC operating system market share and consistent revenue contributions from both enterprise and consumer Windows desktop deployments. … Windows 10 is running on over 350 million devices today. … We believe Windows-based desktop PCs will remain the primary mode of productivity in the enterprise environment for the foreseeable future, and the tail for Windows in the consumer market remains long. …

I hope my praise of Nadella doesn’t make it look like I worship the man. I mean, I don’t even know him! But it’s impossible to talk about the company’s ascension these last few years without talking about him.

For example, one thing that makes Microsoft an attractive investment is its tendency to beat analysts’ earnings estimates quarter after quarter.

Dating back to Q1 of 2015 – Nadella’s first full year at the helm – Microsoft has failed to meet or beat estimates only once in the last 16 quarters. 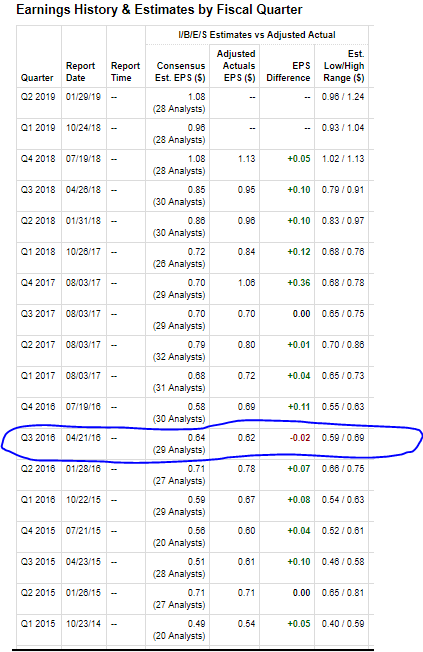 Such consistency is reassuring to investors, who buy the stock and drive up its price.

Also reassuring: Microsoft is one of only two companies in the world to receive Standard & Poor’s AAA credit rating. The second is Johnson & Johnson (JNJ), another IBP component.

A Company That Performs

The most recent quarter’s earnings report was yet another tour de force.

The following slide from Microsoft’s earnings presentation shows growth across the board. 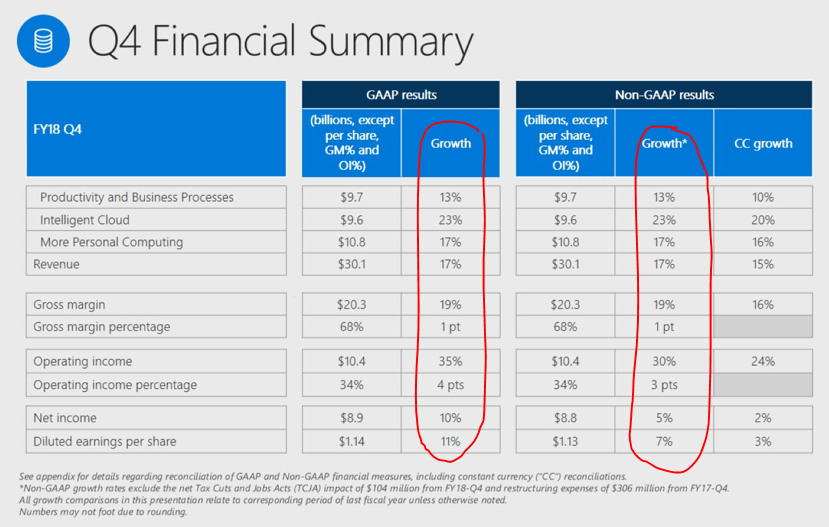 Here is a closer look at some of the quarter’s highlights, featuring the fine performances by Office 365, LinkedIn (which the company acquired in 2016), Azure, Windows, Xbox and Surface. 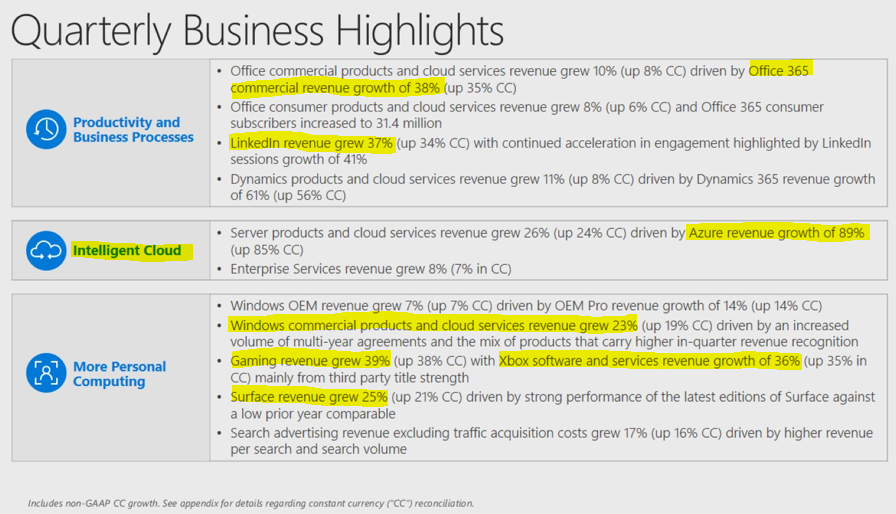 The following “Financial Sonar” from Jefferson Research’s analysts indicate the health of the company. Important to note is that it doesn’t even include the results of the most recent quarter. 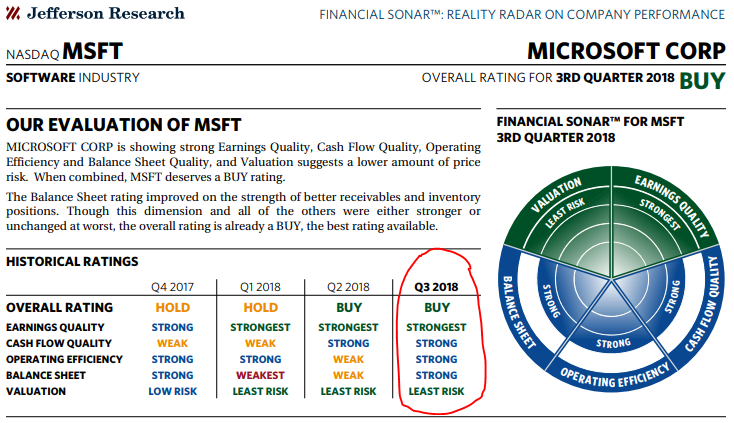 Income That Flows And Grows

With all of this growth, it’s almost quaint to look back just a few years ago, when Microsoft was a value play that became popular with Dividend Growth Investing practitioners.

Microsoft’s yield has gone down-down-down since — it’s at 1.6% now — but not because the company stopped raising its dividend. 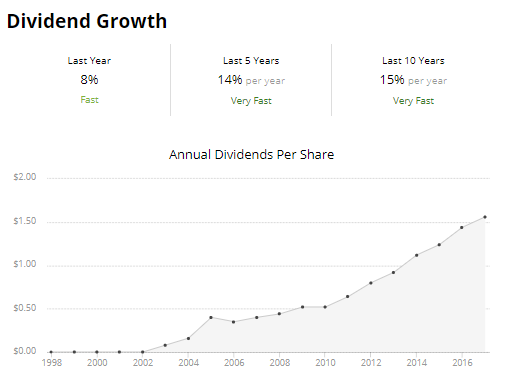 MSFT has had 16 consecutive years of dividend growth.

Most recently, the company increased its payout 7.7% to a quarterly rate of 42 cents/share.

Microsoft is due to announce another raise in September.

Given how strong the last couple of years have been, I’ll be surprised if the company doesn’t return to the double-digit percentage hikes that had been the norm.

The following graphic from McLean Capital Management shows that MSFT has the free cash flow necessary to easily cover its dividend.

Its industry is hyper-competitive, and its rivals include some of the richest, best-run companies on the planet.

Amazon is not about to cede any ground in cloud services, and Alphabet (GOOGL) just wrapped up a smashing quarter that featured outstanding performance from Google Cloud, the fast-closing No. 3 in that space. Apple is the world’s most valuable company.

I have discussed several reasons for my enthusiasm about MSFT … and here’s another (as well as a disclosure):

My son-in-law, Ben Randall, is a software design engineer in Microsoft’s gaming division. He and Katie recently celebrated their marriage in Cabo San Lucas, Mexico. 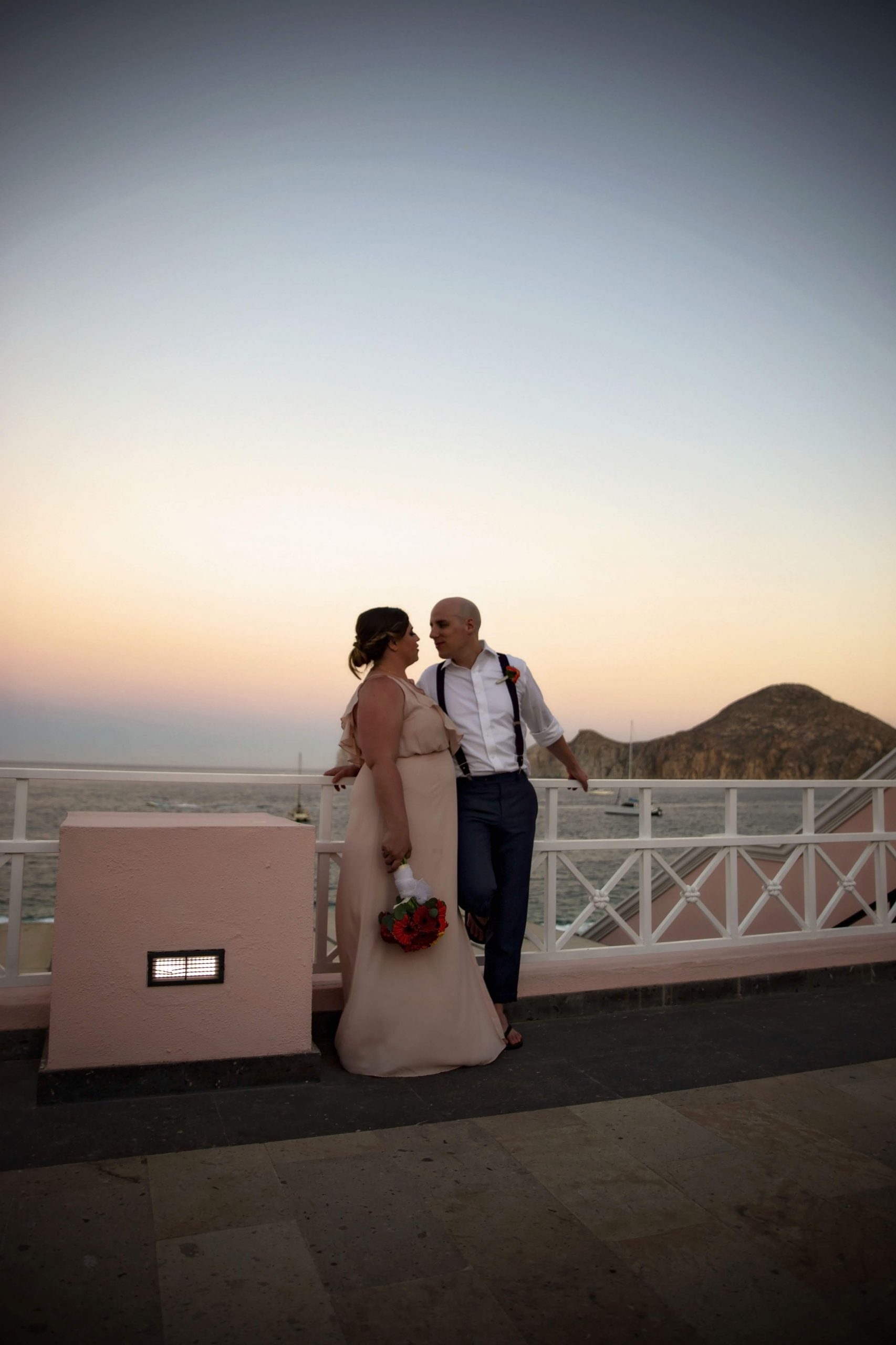 So I obviously have significant personal interest in Microsoft’s continued success, above and beyond the large position I own.

I have great confidence that it will be a fine investment for one and all — including the Income Builder Portfolio.

The next time I hear Mick & Co. sing You Can’t Always Get What You Want, I’ll be thinking, “True, but sometimes you can — and we got Microsoft.”

My article about the execution of our MSFT purchase, along with some important valuation information, will be published Saturday, July 28.

As always, each investor is urged to conduct his or her own due diligence.