If anybody asks why I selected AT&T (T) for DTA’s Income Builder Portfolio, those are my short, sweet answers.

There were other reasons, naturally; AT&T is an interesting company in a fast-changing, competitive industry. Nevertheless, I can’t deny that valuation and yield (not necessarily in that order) were Reasons #1 and #1A. 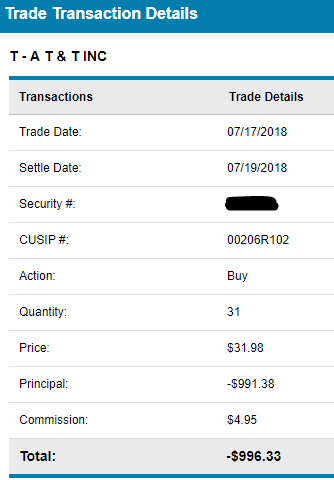 Including the brokerage commission, the transaction cost $996.33. Because DTA allocates $2,000 monthly for two buys, we will have about $1,000 available for our second July purchase.

Ringing Up The Dividends

More than $62 in AT&T dividends will come into the portfolio in the next year. I say “more than” due to the reinvestment of dividends and the likelihood that the company will increase its payout during the time period.

AT&T also instantly became the portfolio’s lowest dividend grower on a percentage basis, with annual raises of only about 2% over the past several years.

As much as I like aggressive dividend growers, raise percentage can be a little deceptive. AT&T’s current payout is so high that it would take years (or even decades) for fast-growing, low-yielding companies to “catch” T in the income-production department.

There are many ways to diversify a Dividend Growth Investing portfolio, and one of my favorites is to have fast-growing low-yielders, slow-growing high-yielders, and everything in between.

That’s what I do with my personal portfolio, and that’s how I am building the IBP. 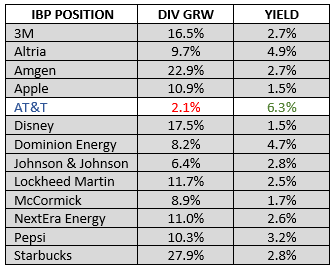 Having just missed T’s ex-dividend date (July 9) with our purchase, the Income Builder Portfolio will not receive a distribution from the company until Nov. 1. At 50 cents per share, the payout will be $15.50.

As mandated by the IBP Business Plan, all dividends are reinvested right back into companies – a no-cost process also called “dripping.”

Assuming the company announces in December that it will raise its dividend for the 35th consecutive year, and assuming the increase again will be a penny per quarter, the next payout would be 51 cents/share.

It’s pretty cool the way an income stream gets built … and it helps explain why we named this portfolio what we did.

As I mentioned earlier, I mostly was drawn to AT&T right now by its bargain-basement share price and its top-shelf dividend yield.

The two are inter-related: The lower the price goes, the higher the yield goes (and vice versa).

In the following graphic, Simply Safe Dividends explains that a comparison of AT&T’s current yield to its 5-year yield suggests that the company is significantly undervalued. 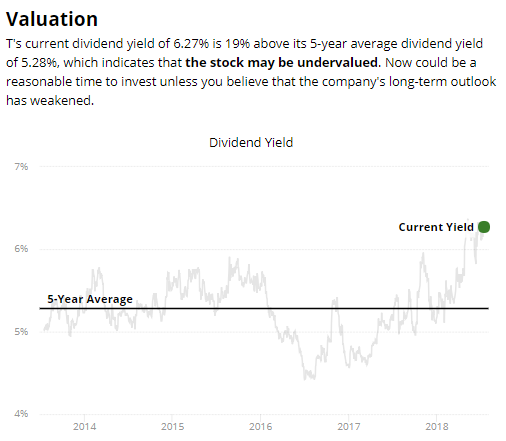 According to Value Line, AT&T’s Relative P/E ratio of well below 1 (red circled area) indicates that the company is quite undervalued when compared to the average of the 1,700 stocks in VL’s analytical universe. Value Line also believes T’s price could nearly double over the next 3-5 years (blue circle). 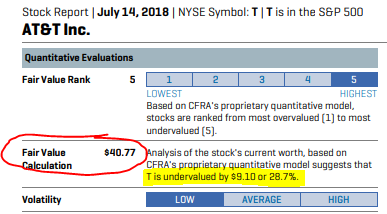 The first of the two Morningstar graphics below indicates that its analysts rate AT&T a 4-star buy (on a 1-to-5 scale) with a fair value of $40. The second shows how inexpensive T is in relation to both its industry and the overall market. 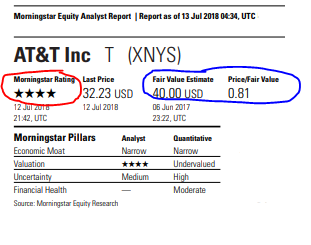 Eva Dimensions’ analysts give T their highest buy score. Take note of the highlighted comment within the graphic below.

Finally, we check out what FAST Graphs has to say. The two illustrations below show T to be significantly undervalued when looking at either P/E ratio or price-to-free cash flow. 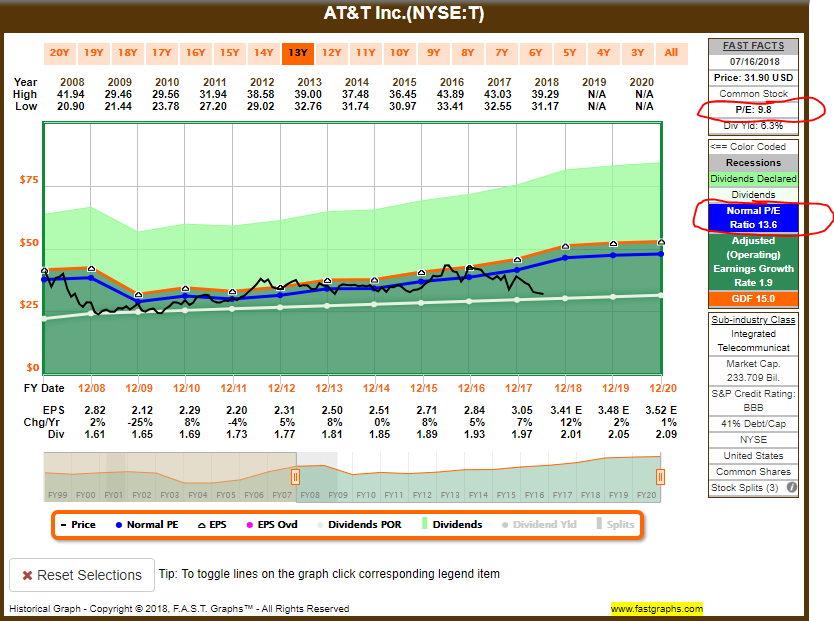 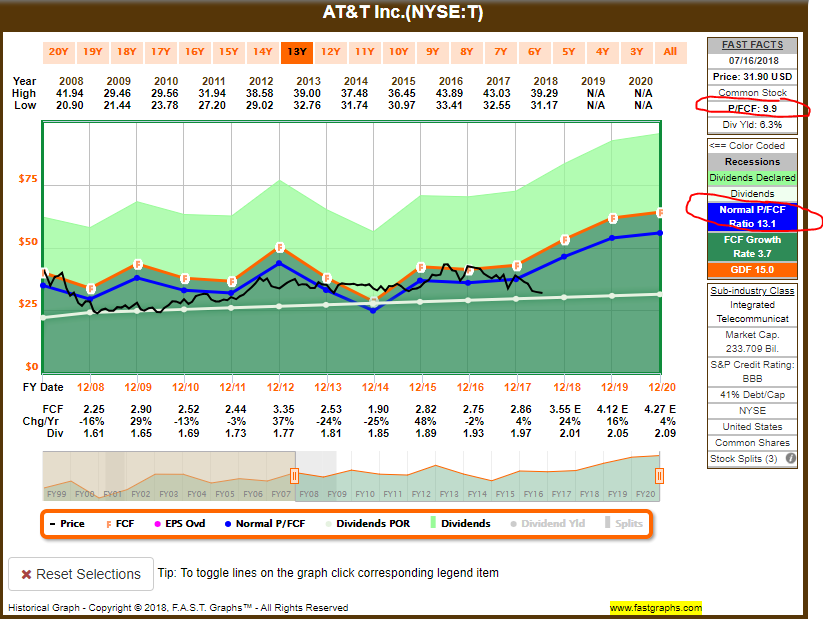 Even analysts that have serious questions about AT&T’s operations acknowledge that it is a “good deal” right now. I am in that camp, too.

If there weren’t questions, the stock would be priced much higher, so yes, there is a little risk here.

The company has been around for a long time, however, and it has been raising dividends annually for 3 1/2 decades. It has survived numerous challenges and undergone many changes. I think that will continue.

Of course, just because T is attractively valued does not automatically mean the price will go up from here. It could trade sideways for awhile or even go down, especially if regulators keep causing the company headaches and expense.

As with every other IBP position, though, AT&T is expected to be a long-term holding. I’m confident that, over time, it will be an outstanding income producer that just might end up being a pleasant surprise in the total-return department, too.

This is not a recommendation to buy T or any other stock; all investors should do their own research.

This Stock is a Buy Now… Bigger Returns Are Coming

Your Next Star Growth Stock

3 Dividend Stocks To Buy In Your 40’s

Warning Signs: A Correction Could Be Coming in 2021

This Undervalued Stock is a Must-Own

This Stock is a Great Investment