When we launched the Income Builder Portfolio project six months ago, I was determined not to select companies merely because they have been popular for years with the “Dividend Growth Investing crowd.”

Nevertheless, here I am, making AT&T (T) the latest choice for our real-time, real-money, DGI-focused portfolio.

Come Tuesday, July 17, I will execute a purchase order on Daily Trade Alert’s behalf for about $1,000 worth of T.

As this article progresses, I will discuss the pros and cons of investing in AT&T, but first things first …

Shares of AT&T are dirt cheap!

The company’s P/E ratio is significantly lower than its historic average. Indeed, T hadn’t traded at 10 times earnings since the world was emerging from the Great Recession. 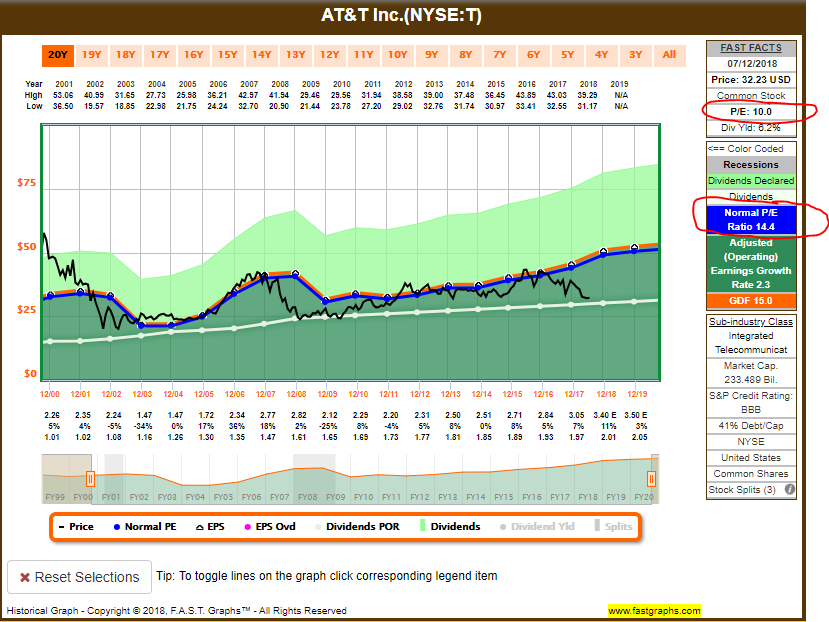 I will go into numerous other valuation metrics in my post-buy article of Wednesday, July 18, but I wanted to say that right out front.

Is AT&T Always Ideal For DGI?

In introducing the IBP to readers in January, I said I would build and maintain the portfolio with DGI newcomers in mind. I further explained:

One kind of “DGI newbie” is the young person who is just getting started as an investor and believes Dividend Growth Investing could be the right way to secure his or her financial future.

Another is a person who has been investing for years, perhaps buying mutual funds in his or her 401(k) plan and IRA, but has decided to switch to an income-centric, individual-stock strategy. That investor could be in his/her 40s or 50s (as I was), or a much older person who is approaching retirement or already retired.

AT&T has been a notoriously slow-growing company and might not be right for the first type of newbie I described in that passage.

One could argue it will NEVER make an investor rich, as its share price hasn’t grown in more than two decades.

I have helped my 31-year-old daughter build her portfolio, and T wasn’t even considered.

Conversely, I am in my upper-50s and semi-retired, and T produces roughly 6% of my annual income — the highest percentage of all companies in my personal portfolio.

What the above Morningstar graphic does not show is this: Despite prices going nowhere for 20+ years, AT&T actually has an average annual total return of 4.64% during that span.

That’s all because of the generous dividends the company has paid, and the reinvestment of those divvies right back into additional T shares.

The 4.64% is well behind the 7.20% total return that the S&P 500 Index recorded, but it demonstrates the allure of AT&T to those who are primarily interested in income.
Let me stress that I am not saying oldsters should buy AT&T and youngsters should avoid it.

I’m just pointing out that investors (even DGI practitioners) who really value growth might want to look elsewhere, while those who emphasize income (even slow-growing income) have a legitimate reason to own T.

Heck, at this price, maybe AT&T appeals most to short-term traders hoping to sell at a profit in the not-too-distant future.

AT&T has grown its annual payout to shareholders for 34 years, making it a Dividend Aristocrat. At its current rate — 50 cents per quarter — T’s yield is a robust 6.3%.

However, the company has been increasing its dividend by only 4 cents annually (or a penny per quarter each year). 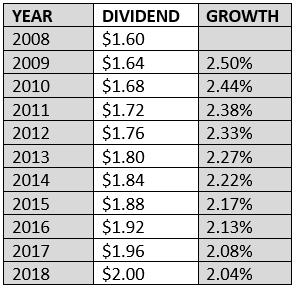 A DGI practitioner can justify owning a company heavy on the “D” but light on the “G” in two ways:

In the articles I’ve written explaining why I have selected companies for the Income Builder Portfolio, I usually have started with information about the businesses. But because the dividend is arguably the main reason to own AT&T, that’s what I’ve focused on here so far.

Still, as important as the dividend is, I don’t want to own lousy or overly speculative companies.

Not Your Father’s AT&T

The first time I asked a girl out on a date, eHarmony, Tinder and OkCupid were nowhere near being “things.” I called her using the rotary-dial telephone in my parents’ house. 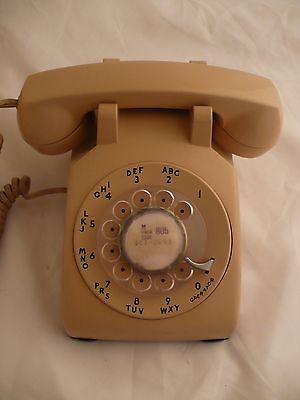 Back then, AT&T was known as Ma Bell, and she was the mother of monopolies.

Late in the last millennium, the combination of deregulation and the dawn of the Internet Era affected AT&T as much (or more) than any company in any industry.

The company was broken up, and wireless replaced landlines as the go-to method of interpersonal communication.

Over the last several years, the biggest players have sought to become communications/media conglomerates.

In 2015, AT&T paid $49 billion for DirecTV. And just last month, after a long battle with regulators, T closed its $85 billion deal for Time Warner, owner of Warner Bros., HBO, Turner, Hulu and other properties.

Depending upon the observer, the DirecTV deal either has been mildly successful or a lame attempt at synergy; I wasn’t enamored with the move though I am somewhat encouraged by the potential of the DirecTV Now streaming service.

Like most analysts, I like the acquisition of Time Warner (which AT&T is now calling WarnerMedia). But I do wonder if it will live up to its high price, and I am concerned about the debt T now carries. 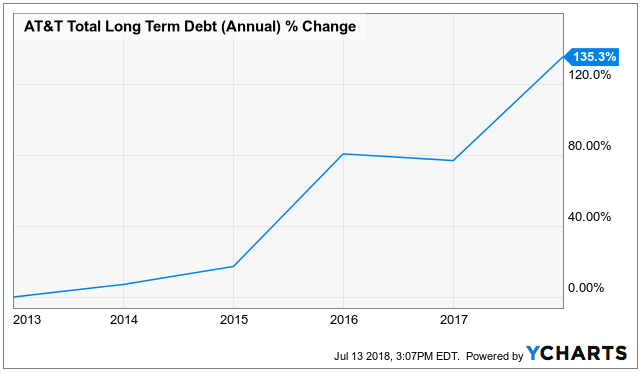 The Department of Justice aggressively fought the merger until Judge Richard Leon approved it without conditions on June 12. Leon said the government failed to meet its burden to establish that the deal would lessen competition substantially.

The Trump Administration’s DOJ announced Thursday, July 12, that it is appealing Leon’s ruling, again contending that the combined company would raise prices for consumers and decrease competition.

Donald Trump has a running feud with CNN and TBS — both now owned by AT&T — and has opposed the merger from Day 1. To me, this looks like a personal vendetta and a waste of taxpayer money, and analysts do not believe his DOJ will prevail.

This is probably a six-month process to go through this appeal. There could be a couple other proceedings even after that. And with that sort of drag, it’s gonna make it harder for the stock to work.

We think the Time Warner deal is great for them. The stock is pretty undervalued however you slice it. … It’s trading at less than 10 times earnings and free cash flow. That’s definitely inexpensive.

But we heard from so many investors that they don’t want to take on this legal risk, and so we’re gonna step on the sidelines for now.

So why am I not stepping on the sidelines? Why am I choosing T for the IBP now?

Because if I wait until AT&T prevails again, as expected, it could be considerably more expensive.

The $31 level has provided a pretty solid floor for T’s price over the last few years, as the 6%-plus yield has enticed institutional investors and individuals alike. I bought most of my personal position in the company under $32.

The last few years, some of my very best buys have come when a company’s price has been knocked down by “noise.”

For example, I bought Boeing (BA) at $115 after the government started looking into the company’s accounting practices; Apple (AAPL) at $115 after it barely missed meeting outrageous expectations for iPhone sales; and McDonald’s (MCD) at $90 due to concerns about Americans’ changing dietary habits. Each has crushed the market since. 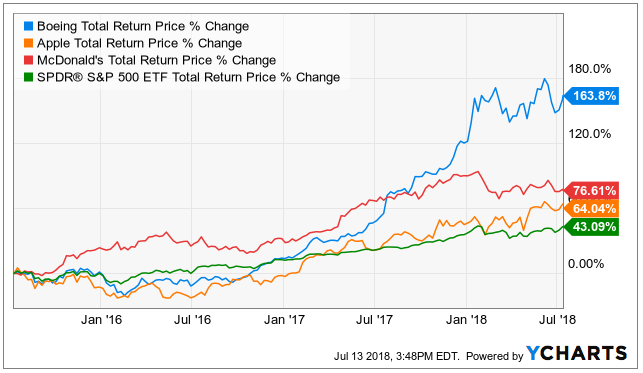 I certainly don’t expect AT&T to experience that kind of price appreciation, but I will be satisfied to see the IBP collect the huge dividend while we wait for some bounce off this oversold price.

Other Items Of Interest

In the new group, AT&T and longtime rival Verizon (VZ) will be joined by technology giants Alphabet (GOOGL) and Facebook (FB), as well as Disney (DIS), Netflix (NFLX) and other entertainment content providers.

Communications Services will make up about 10% of the S&P 500 — roughly 5 times as much as the current telecom sector. That could result in more institutional investors buying T.

Some AT&T investors call it a “bond substitute” due to its reliable dividend and high yield. Others say it is “utility-like.”

I don’t subscribe to either school of thought. While I don’t consider AT&T to be speculative, I also don’t believe it (or any other stock) is “safe” — as comparisons to bonds and utilities suggest.

T is not a government-backed bond, nor does it benefit from the kind of protections most utilities do.

As the new GICS sector shows, AT&T has more in common with high-powered technology and entertainment companies than it does with Duke Energy (DUK) and Consolidated Edison (ED) — or even with the old Ma Bell.

I’m good with all of that, and I’m happy to see the Income Builder Portfolio add a blue-chip Dividend Aristocrat at a deep discount.

As always, each investor should conduct his or her own due diligence.