Welcome back to the Valuation Zone, where we hunt for well-valued dividend growth stocks hiding in the forest of stocks that sell on one market or another.

This month’s stock is Starbucks (SBUX), the ubiquitous coffee seller. We last visited Starbucks almost a year ago, when it was our Dividend Growth Stock of the Month for September, 2017.

Since that article, lots has happened at Starbucks.

• It increased its dividend 20% last November.
• Its yield has hopped up from 1.8% to 3.0%.
• It was the site of the now-infamous incident in a Philadelphia store where two black men had the police called on them as they were waiting for a friend to arrive for a meeting. Starbucks later closed down all its American stores for an afternoon of diversity training.
• Its former CEO, Howard Shultz, stepped down from the board.
• Its CFO, Scott Maw, unexpectedly announced his retirement to take effect in November.
• First-quarter results and guidance were disappointing.

For these reasons and others, Starbuck’s price has fallen to a 3+ year low. You can buy it now for the same price as in mid-2015. However, since that point in 2015, Starbuck’s dividend has increased 4 times for a total increase of 125%. 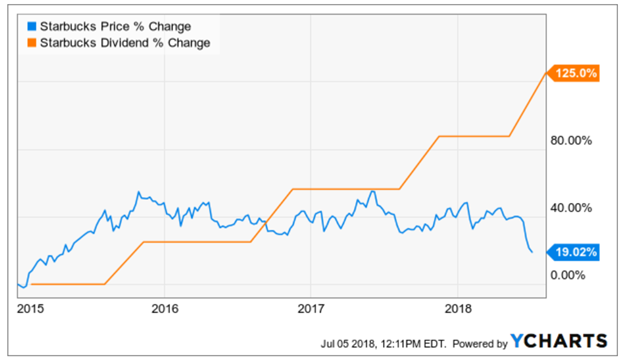 Starbucks is a Dividend Challenger with an 8-year streak of increasing dividends.

Its current yield is 3.0%. Its next increase is expected in November.

As always, before we take a look at a stock’s valuation, we’ll check to see if its dividend is safe.

Most dividend growth investors require a safe dividend before considering investing in a stock. 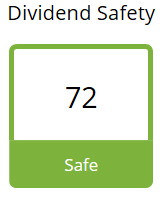 Under their system for analyzing dividends, Simply Safe Dividends sees Starbuck’s dividend as “Safe,” unlikely to be cut.

To see how I value a stock, please read Dividend Growth Investing Lesson 11: Valuation. In a nutshell, I assess the stock in 4 different ways, then average the results out.

That P/E = 15 reference for fair value is shown by the orange line on the following graph, while the black line is Starbucks’ actual price. 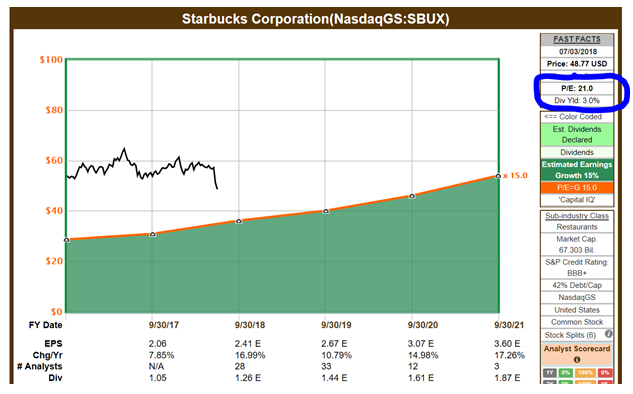 By this first method, Starbucks is way overvalued. That’s because its P/E ratio of 21 (circled) is far above the market’s historical P/E average of 15.

To calculate the degree of overvaluation, we make a ratio out of the two P/Es.

That translates to Starbucks being 40% overvalued.

If this were the only valuation method we used, we’d stop here, because few dividend growth investors want to buy a stock that’s 40% above its fair price.

But we use more than one method, so we’ll keep going.

Here’s how to calculate Starbucks’ fair price under this first method: Divide its actual price by that same valuation ratio:

Formula for Calculating Fair Price
Actual Price divided by Valuation Ratio from above
$49 / 1.4 = $35

I round prices off to the nearest dollar, because I don’t want to create a false sense of precision. Valuing stocks is part art, part math.

The next step is to compare the stock’s current P/E ratio to its own long-term average P/E ratio. This lets us judge fair value by utilizing data on how the market has historically valued Starbucks itself rather than by how the market has valued all stocks.

I use the stock’s 5-year average P/E ratio (circled) for this step. 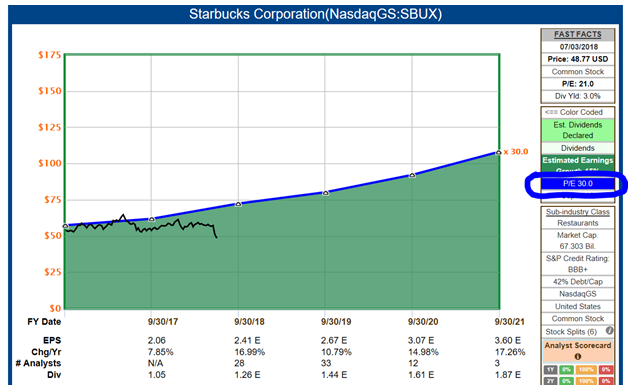 This 2nd step paints a radically different picture, because Starbucks has historically carried a much higher P/E ratio than 15: Its 5-year average is 30, which is because its growth trajectory has been so steep.

So under this approach, Starbucks appears undervalued. By how much? We use the same equations as in the first step.

Instead, they use a discounted cash flow (DCF) model. Using conservative estimates as inputs, they discount all of the stock’s projected future cash flows back to the present to arrive at a fair value estimate. (If you would like to learn more about how DCF works, check out this excellent explanation at moneychimp.)

Under Morningstar’s 5-star system, 4 stars means that they think that Starbucks is undervalued.

As you can see, Morningstar calculates a fair price of $64. That means they consider Starbucks to be 23% undervalued, even though they recently lowered their fair value estimate.

The 4th and final valuation method is to compare the stock’s current yield to its historical yield. If a stock is yielding more than its historical average, that suggests that it is a better value than usual, because you are “paying less” for the stock’s dividends. It’s as if the dividends are a product that’s on sale.

This display from Simply Safe Dividends shows Starbucks’ yield over the past 5 years and its current yield (the green dot). 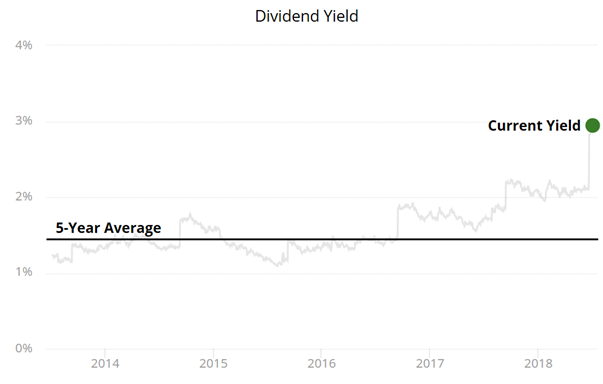 Starbucks’ recent price drop has caused its yield to shoot higher. It is now double its 5-year average of 1.5%. That suggests massive undervaluation.

To calculate the degree of undervaluation, we form a ratio of the yields:

When using this 4th valuation step, I cut off undervaluation ratios at 0.8. That’s because I consider yield comparisons to be an indirect way of measuring valuation, so I want to be conservative.

The average of the 4 fair-price estimates is $58, compared to Starbucks’ actual price of about $49. That’s an 18% discount to fair value, suggesting that there is a margin of safety for someone buying the stock now.

I never suggest that anyone should take action based solely on one of my articles or to mimic what I own. A fuller analysis would be required.

My colleague Mike Nadel selected Starbucks for Daily Trade Alert’s Income Builder Portfolio. His most recent report on that portfolio can be found here.

In any event, this is not a recommendation to buy Starbucks. Perform your own due diligence. Check the company’s dividend record, business model, quality, financial situation, and prospects for the future.

Also consider whether it fits (or does not fit) your long-term investing goals. In Starbucks’ case, its usual low yield that may have disqualified it in the past for some investors has, at least temporarily, become a 3% yield that might easily surpass some investors’ minimum requirements.